The Greenwich United Way 2014-2015 Community Campaign got its official start Thursday, September 18, with First Selectman Peter Tesei declaring “Greenwich would not be the community it is if it weren’t for our United Way.” Delivering a proclamation on the steps of Town Hall to launch the organization’s 80th Greenwich United Way is the heart of the community, working with and for the town to ensure local needs are met.” 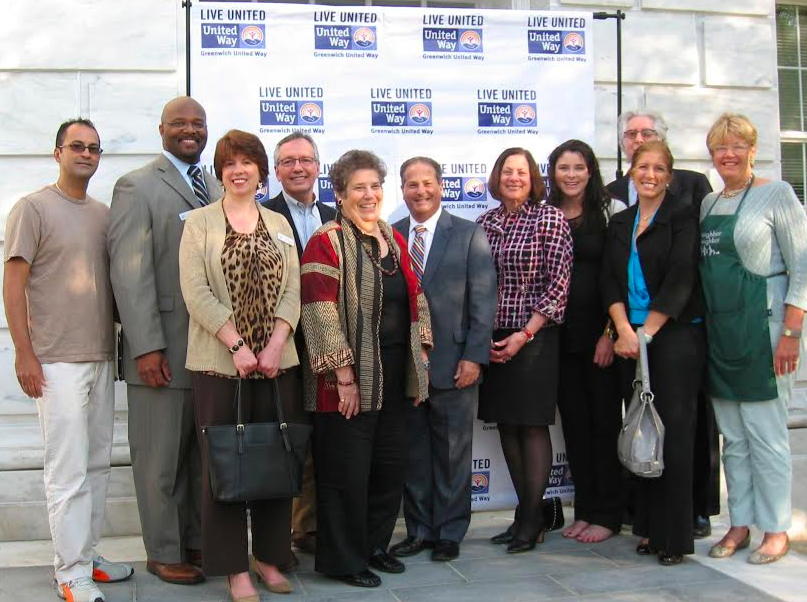 Mr. Tesei noted that the United Way, in the midst of its milestone 80th and meeting the health and human service needs of the community, raises and distributes more dollars for essential local services each year than any other non-governmental source.

Board Chair Virginia Meyer, board directors, and representatives of Community Centers, Inc., Family Centers, the Greenwich YWCA, the Boys and Girls Club, Kids in Crisis, Neighbor to Neighbor, YMCA, Abilis and other United Way partner agencies heard President Stuart Adelberg recall the United Way’s beginnings as the Community Chest and Council. He described it as “the promise of a community coming together as family to help our most vulnerable residents, a promise that is as compelling today as it was 80 years ago.”

The 2014-2015 overall Campaign Co-chairs are Brook and Dr. Michael Urban. Mrs. Urban announced that thousands of solicitations have been delivered or are en route to individuals and businesses and that early responses are encouraging. Brook is a past president of the Junior League of Greenwich and executive director of the Greenwich Chapter of the American Red Cross. Michael is a prominent anesthesiologist affiliated with the New York Hospital for Special Surgery and a member of the board of United Way partner agency, Liberation Programs. The Urbans have gathered a team of committed local volunteers who will each lead a specific sector of the Community-Wide Campaign. The team includes Debra McLaughlin, Traci Fiore, Jamie Tyndall, Emily Sternberg, Greenwich Social Services Commissioner Dr. Alan Barry and Town Clerk Carmella Budkins.

To make a secure online contribution to the Community-Wide Campaign or to take part in the United Way’s Oktoberfest, the first special fundraising event of the year, set for October 24th fundraising year, he said “The year of identifying at the Loading Dock in Stamford, go to www.unitedway-greenwich.org.