Jack Doss and Michael Grabel, this year’s leaders of Greenwich High School’s Cardinal Crazies Club, are making the best of a bad situation given the COVID-19 pandemic has forced schools to close, bringing additional worries about summer plans and college in the fall.

We first met Jack and Michael last fall when their injuries kept them from playing sports, but they channeled their enthusiasm into Cardinal Crazies.

Under their leadership, membership had swelled. There are almost 3,000 members today.

Cardinal Crazies sweatshirts and rally towels, designed and produced with the help of local vendors, sold quickly and $1,000 was donated to  Memorial Sloan Kettering.

Since Greenwich Schools closed on March 13, Michael and Jack have been staying busy, and they hope to harness the momentum of their popular club for the good for the Greenwich community, which has been hard hit by the pandemic. In particular they said they wanted to do something for heroic doctors, nurses and cleaning staff at Greenwich Hospital.

At the same time, with school closed and students doing their best at distance learning, Jack and Michael have been wondering who will take over at the helm of their club.

Toward that end, the boys had an ingenious idea, creating a week’s worth of fun challenges where applicants seeking to lead Cardinal Crazies in 2020-21 can showcase their school spirit, while raising funds to help local restaurants, and in turn, feed the workers at Greenwich Hospital.

“We’ve been obviously not feeling too great, missing our senior year,” Michael said. “We decided to take the opportunity to not only have a fun week with a marathon of charity events, but also to raise money for a good cause.”

“We spoke to Rob Guerrieri at Upper Crust Bagel, and the owner of Greenwich Pizzeria,” Jack said. “We want to organize a big breakfast display for doctors, nurses and custodians, and big pizza lunch.”

Jack said Greenwich Hospital also has a COVID-19 relief fund to help pay for hotel rooms for doctors and nurses supplementing regular hospital staff, and they will donate to that as well. 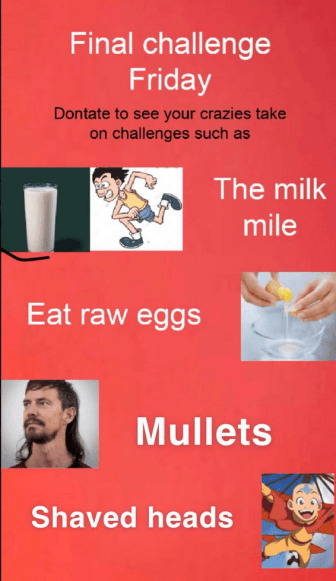 “People are doing crazy long commutes because there is the need,” Michael said. “A lot of nurses and doctors live in places like Bridgeport and work long shifts. They don’t have the time or energy to do the commute.”

“We want parents, friends, aunts, uncles, grandmas and grandpas to sponsor children on their runs,” Michael added. “It’s not the kids with the money to donate, but this is a good way for the kids to get involved.”

Jack and Michael said if not for COVID-19, Monday would have been senior skip day.

“We’re missing prom and senior skip day,” Jack said. “But at least we can do something fun for kids at our school. These are fun challenges for the 18 kids applying for Cardinal Crazies president next year.”

The challenges are impressive, escalating in required fortitude along with the pledges.

“If we hit $500, one president will get pied in the face,” Jack said, adding that other challenges involve a polar plunge, head shaving, virtual Karaoke singing, and an ice bucket challenge.

“Different applicants will even die their hair red,” Jack said of a challenge requiring particular commitment.

“As the money goes up, the challenges get harder and harder,” Jack said. 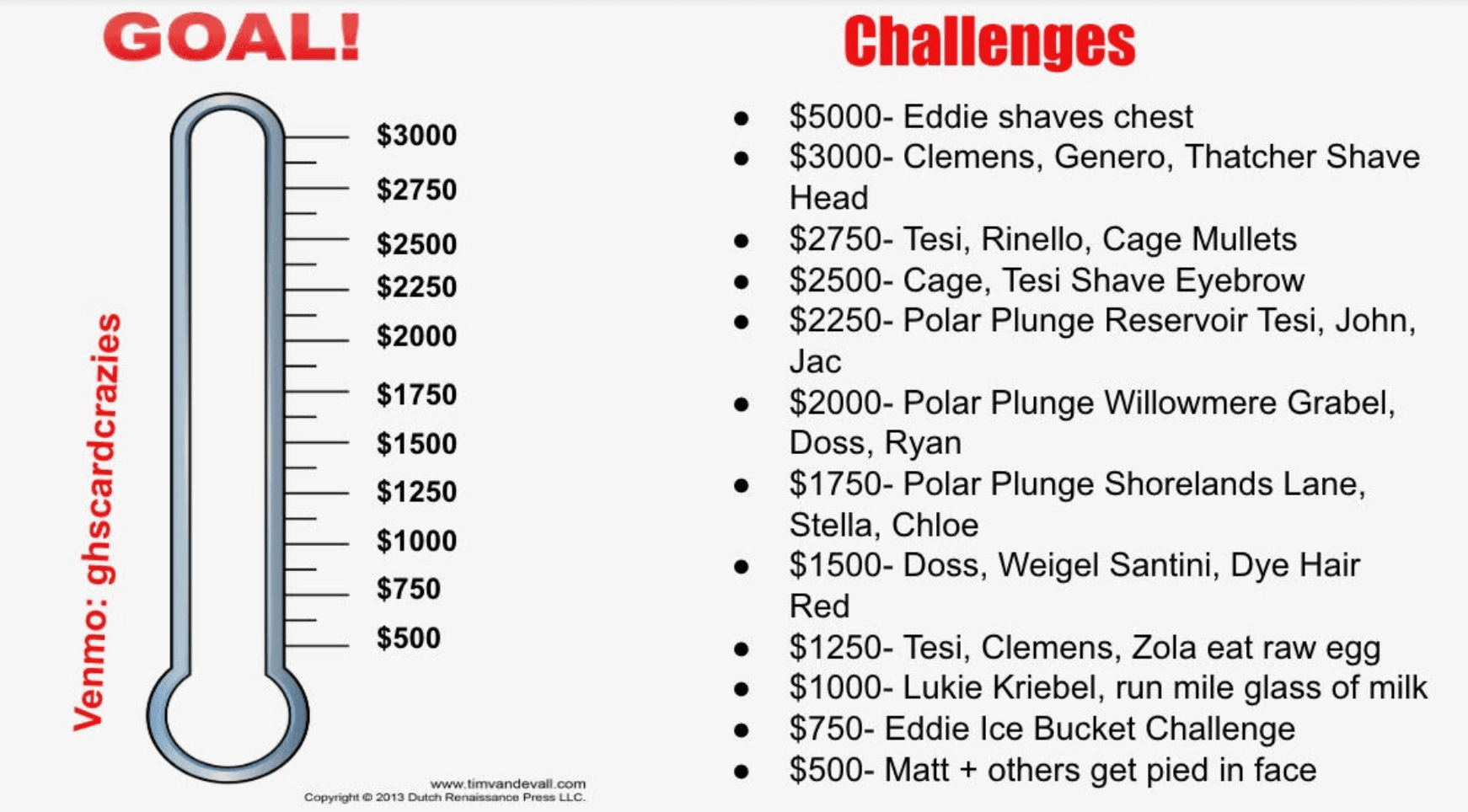 “We were going to hold interviews, but we can’t do more than Zoom. But there were things we wanted to do with the applicants and this is a great way to see who will take the step up and be involved,” Michael said. “Every one of the kids applying is doing a challenge at a certain amount of money. It really shows that Cardinal Crazies are on the rise that so many kids want to be involved.”

“I’m running three miles a day with my mom, and my grandmother is pledging money for every mile. It’s a community thing we’re trying to get everyone part of,” Jack said.

“We have two video game tournaments on Tuesday,” Michael said, referring to an NBA 2K basketball challenge and a Fortnight tournament. “People are joining because it’s something to do. Everyone has been stuck watching a lot of Netflix and cramped up at home. This is a good way to have some interaction while being stuck at home.”

By early Monday afternoon, the first day of the challenges, there were pledges via Venmo totaling $1,500.

“Venmo is great. It’s all tracked and gives us the names and amounts from donors,” Jack said.

The club also received a $500 donation from the GHS Young Women in Business Club, run by president Amanda Friedman. 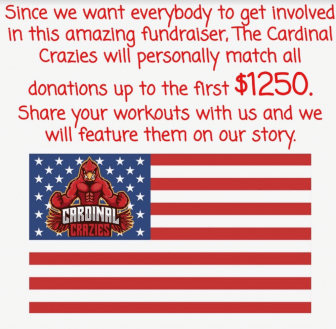 In addition, after donating $1,000 to Sloan Kettering this year, Cardinal Crazies had $1,250 left in its account from their sweatshirt and rally towel fundraiser.

Jack and Michael said they plan to use those funds for matching pledges throughout the week.

“It’s a community thing we’re trying to get everyone part of,” Jack said.

“We want parents, friends, aunts, uncles, grandmas and grandfathers to sponsor children on their runs. My grandmother will pledge $5.00 per mile I run. It’s not the kids with who have the money to donate, but this is a good way for the kids to get involved,” Michael said.

“Not only do I love how involved and supportive this community is, but I especially love seeing youth get involved in caring about an issue outside of their own immediate day,” Ms Kelly said.

Kelly said the Crazies effort is wonderful and speaks volumes to the Greenwich community.

“People are sacrificing now so other people don’t have larger sacrifices,” she said.

First Selectman Camillo said the Crazies effort bodes well for the future. “Give and forget, receive and remember,” he said.

Asked how they keep their spirits up, Jack and Michael said it helps to know everyone is in the same boat.

“All the seniors are in this together,” Jack said. “That’s what’s pushing everyone forward. People are saying that after this, our class will never be closer.”

And while many seniors are still on college wait lists, and are looking to differentiate themselves from others, they say they hope the Board of Education votes to make grades pass/fail for this, their final semester at GHS.

And so with all this worry as a backdrop, Jack and Michael are doing what they do best: staying busy.

“Having a schedule is the best way handle it,” Jack said. “It’s easy to fall into a slump.”

“The beauty of the week long challenge is for kids waking up at 2:00pm, it gives them a nudge to have something to do,” Jack said. “A little bit of hope, and it’s reminiscent of the past – doing things with their friends, and staying engaged and active with their community.”

Anyone who wants to donate to the Cardinal Crazies effort to purchase meals from local restaurants for Greenwich Hospital staff should  Venmo: @ghscardcrazies

Anyone with questions, perhaps on how to enter the tournaments on Tuesday, can email [email protected] 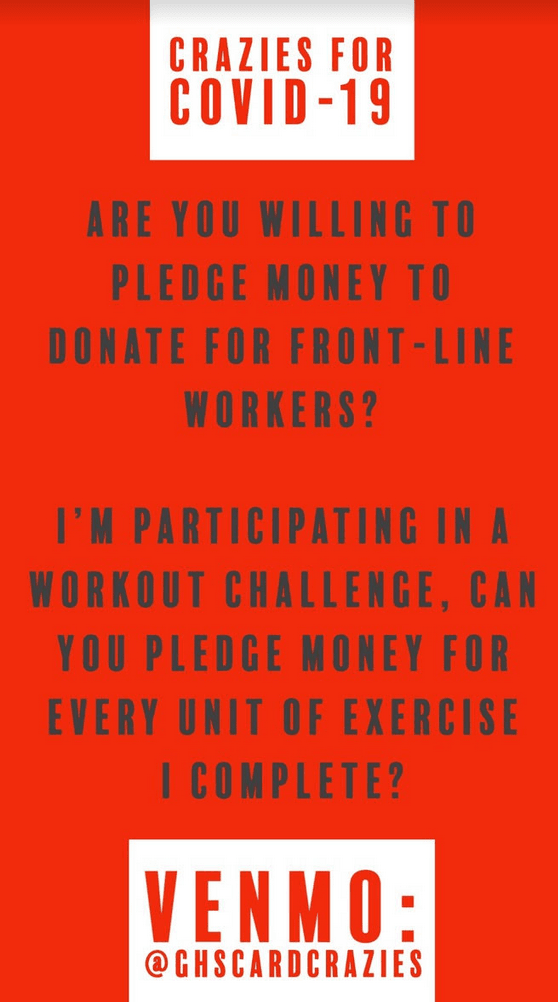 Instructions from Jack and Michael: 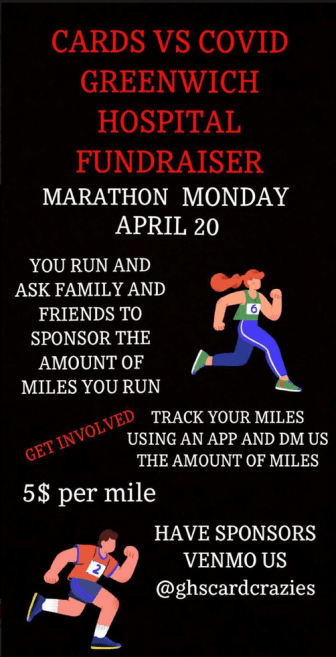 Marathon Monday – Runs all week: This challenge lasts week long, but has an emphasis Monday. It works if you send the invitation card, or just ask family members to pledge to donate money for every set of an exercise, whether it be by a set of push-ups or mile or even half-mile. For example, your grandmother may agree to pledge $5 for every half-mile you run and every set of 40 push-ups. Once you complete the exercise they can send you the money, which you will Venmo to @ghscardcrazies or they can directly donate it.

Tech Tuesday: On Tuesday we will host a c tournament, an NBA 2K Xbox tournament, and have Tik Tok challenges. To join the Fortnite or 2K tournament send us a dm. The Fortnite tournament is a $10 entry fee, the 2K is $5, and Tik Tok is just for publicity. There will be gift card prizes for the two tournaments.

Karaoke Wednesday: On Wednesday those who applied to be next year’s tournament will perform a karaoke song at a time TBD. You may also dm us and challenge a president or president applicant to perform. It is $5 to request an applicant and $10 to request a president; to choose the song as well as an extra $5.

Game-day Thursday: On Thursday we will have an Instagram live bingo, with gift card prizes of course, and a Q&A session with Eddie. The bingo will start at 8:00pm and Q&A with Eddie will follow. To play bingo you must purchase a bingo board which we will send you via dm for $5 a board. We will do two rounds and prizes for first and second place in each round.

Challenge Friday: On Friday throughout the course of the day we will be completing the challenges depending on how much we raised, throughout the day. We will still be open for Venmo donations.