Every year the Greenwich High School spring musical is a months long endeavor and much anticipated event signaling the school year is nearly over. The effort involves casting, choreography, and rehearsals up to the last minute.

This year is extra special! The theater department will perform Anything Goes on May 19-21 in the school’s new performing arts center.

Back in March we featured a dance rehearsal lead by Davyd Suber Jr., choreographer, as he taught the Anything Goes dancers a routine.  Suber explained to the 16 dance couples that the dance – It’s De Lovely –  was an homage to Fred Astaire and Ginger Rogers, and that the duo had danced side by side, and that it was very romantic. 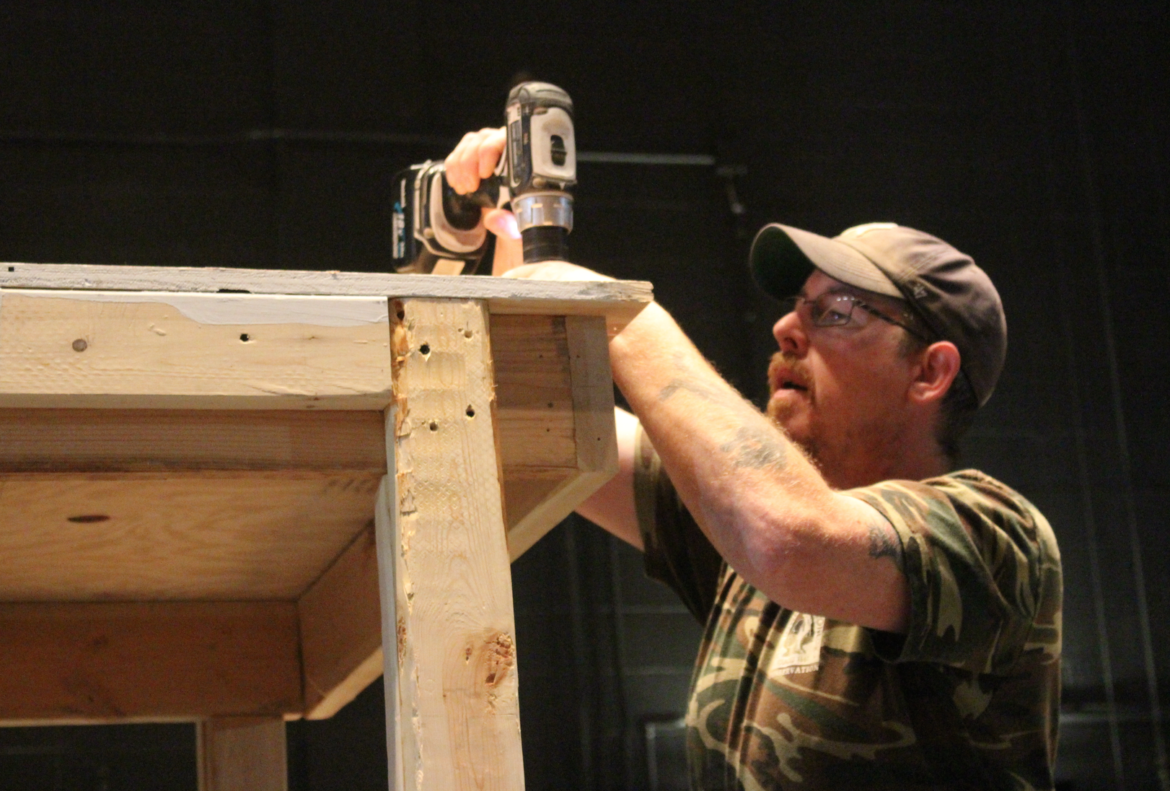 On Saturday, Borowka also benefited from help from Brendan O’Brien, who does set for the theater department at Mamaroneck High School. In fact, GHS was able to use some of Mamaroneck’s platforms.

This Saturday, we visited longtime GHS technical director Scott Borowka and his team of techies as they tackled the job of assembling the upper level platform.

“The new space is bringing back some alumni to help out with the spring musical,” Borowka said.  Both Zach Dobryn and Matt Kramer will be mixing the sound for the show. The will be using the brand new Yamaha CL3 digital mixing console. 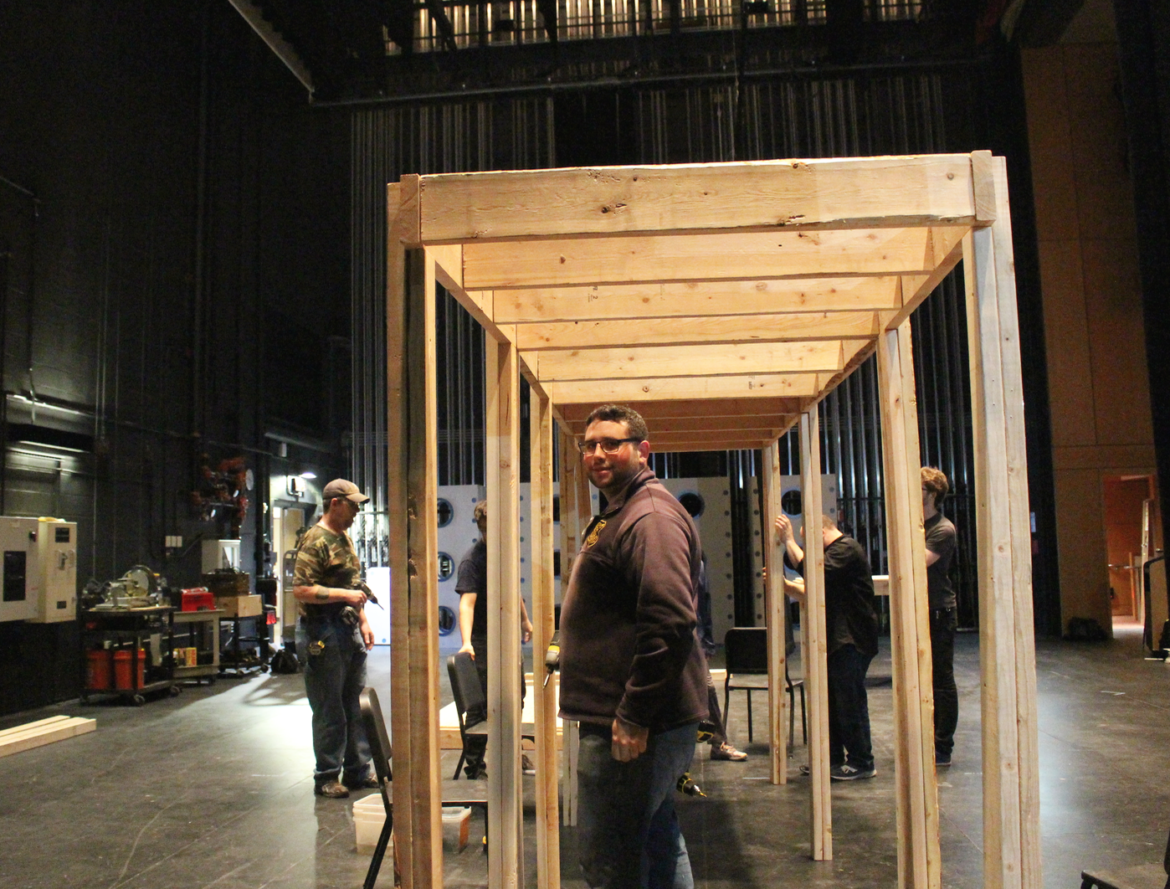 Jason Wein at work assembling a platform for the Anything Goes set. April 30, 2016 Credit: Leslie Yager

Jason Wein who is busy in his job at GEMS and work with Cos Cob Fire Police Patrol, said he was happy to give up his Saturday to help Borowka and tea team. “It’s still fun,” said former GHS techie. “This is where I started, and it’s a chance to be in the new theater.”

“We’re very excited about the brand new auditorium,” Borowka said.  “The new venue is fully equipped with a counter-weight line set system, allowing us to fly in and out back drops,” he continued, adding that a beautiful day sky back drop and romantic moon light sky back drop have been rented for the production.

Borowka said new venue is fully equipped with a Clear-Com headset system, allowing him to talk to his stage crew wherever they are in the theater – on the stage, in the spot booth or on the fly rail. 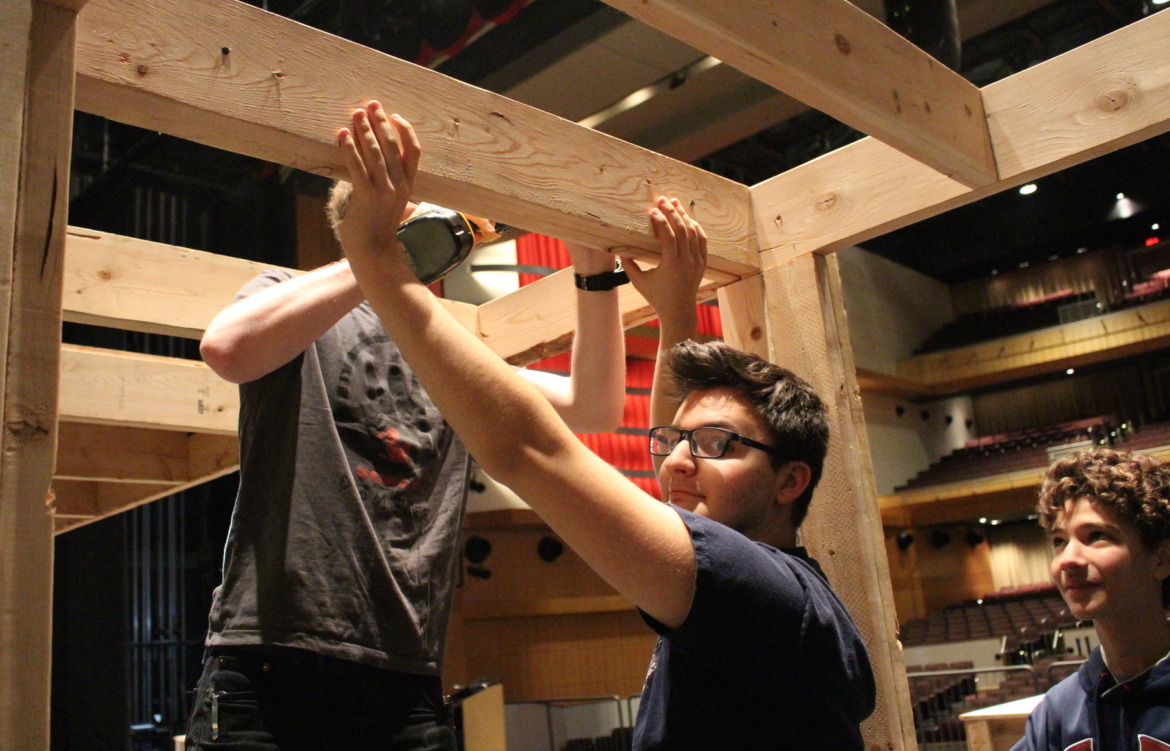 Simon, who has done theater tech all four years at GHS said he tried acting first semester of his freshman year, but decided ye preferred the tech side. “I like the sense of community you get,” Simon said, adding that he wrote his personal essay for college about his theater tech experience. “It’s unique because you ‘re building sets, you’re spending so much time together. There’s nothing like it, except maybe a sport.” 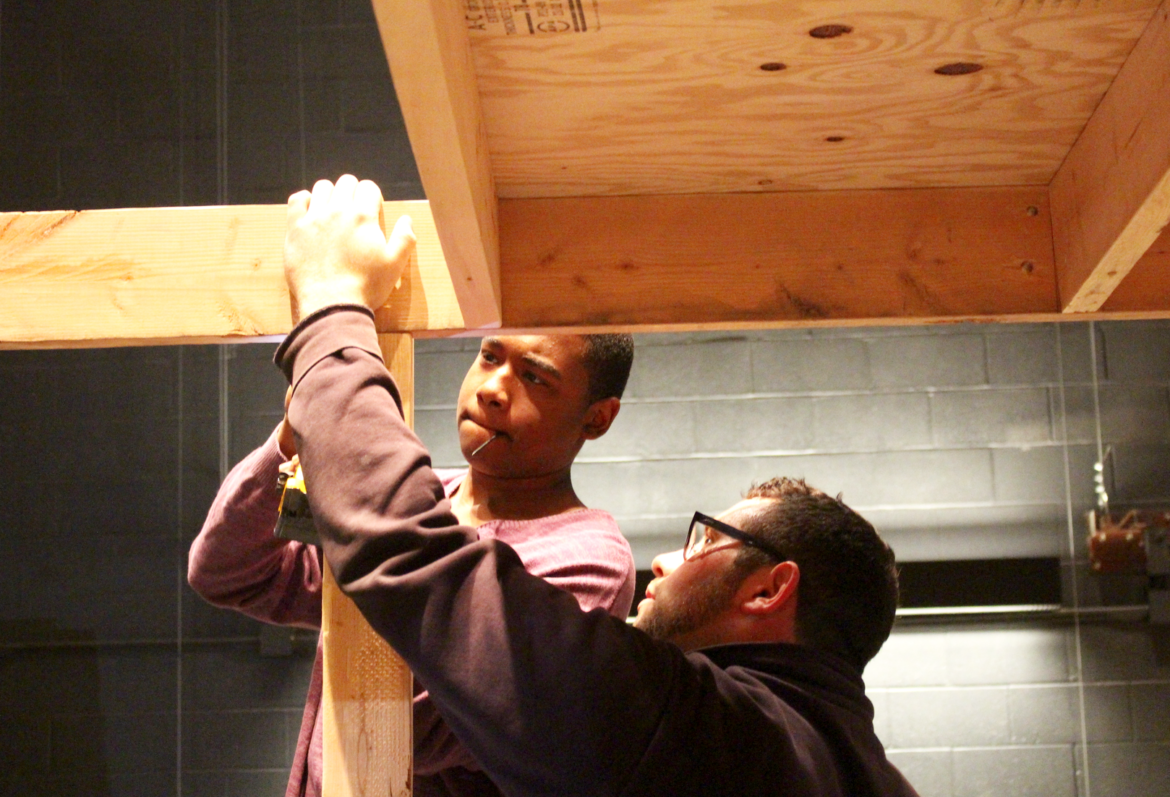 Bruce Tucker and Jason Wein at work assembling a platform for the Anything Goes set at Greenwich High School. April 30, 2016 Credit: Leslie Yager

For Anything Goes, Bruce will be on the stage level during the show, while Simon will be 10 feet above, on the fly rail bringing in and out the back drops.

Liz Murray, a junior class technical theater student, will run a follow spot from the new spot light booth 80 foot above, with a light throw of 100 feet to the stage using a brand new 1200w spot long throw spot light.

All the musicians will be in the “pit,” nine feet below the stage level. Borowka said that not only is his team building a two-story deck of a boat, but they are also creating 18 ft tall ship portals that will be faced with plexi and have LED lights built in to change color for all the songs. 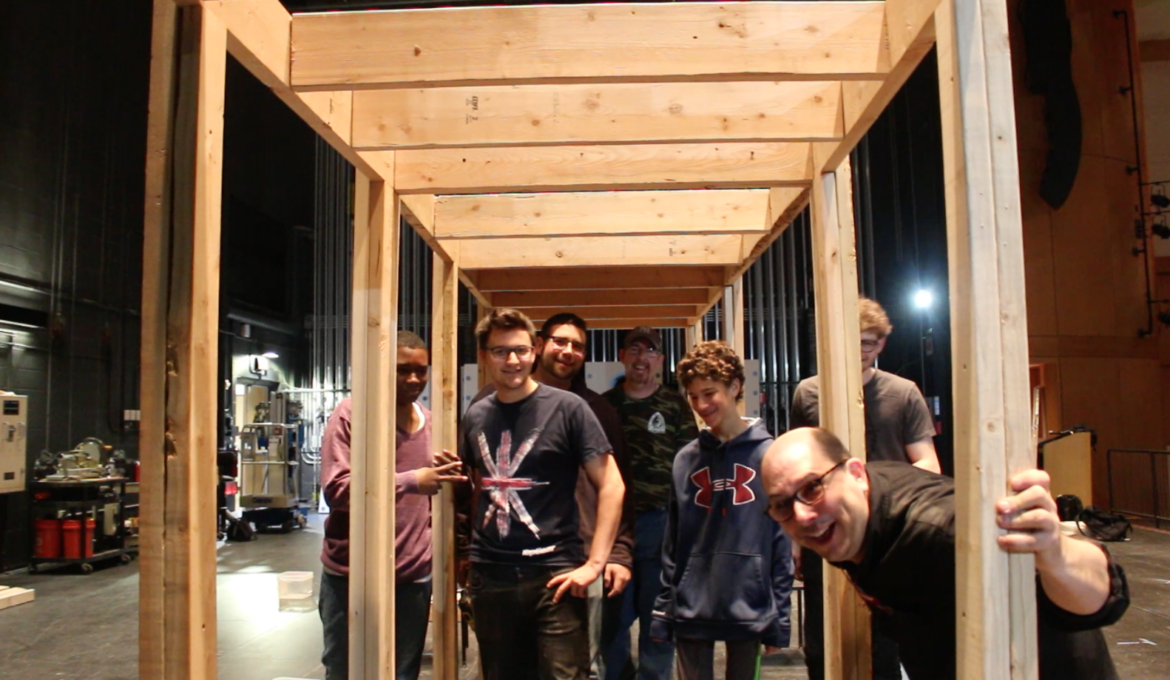 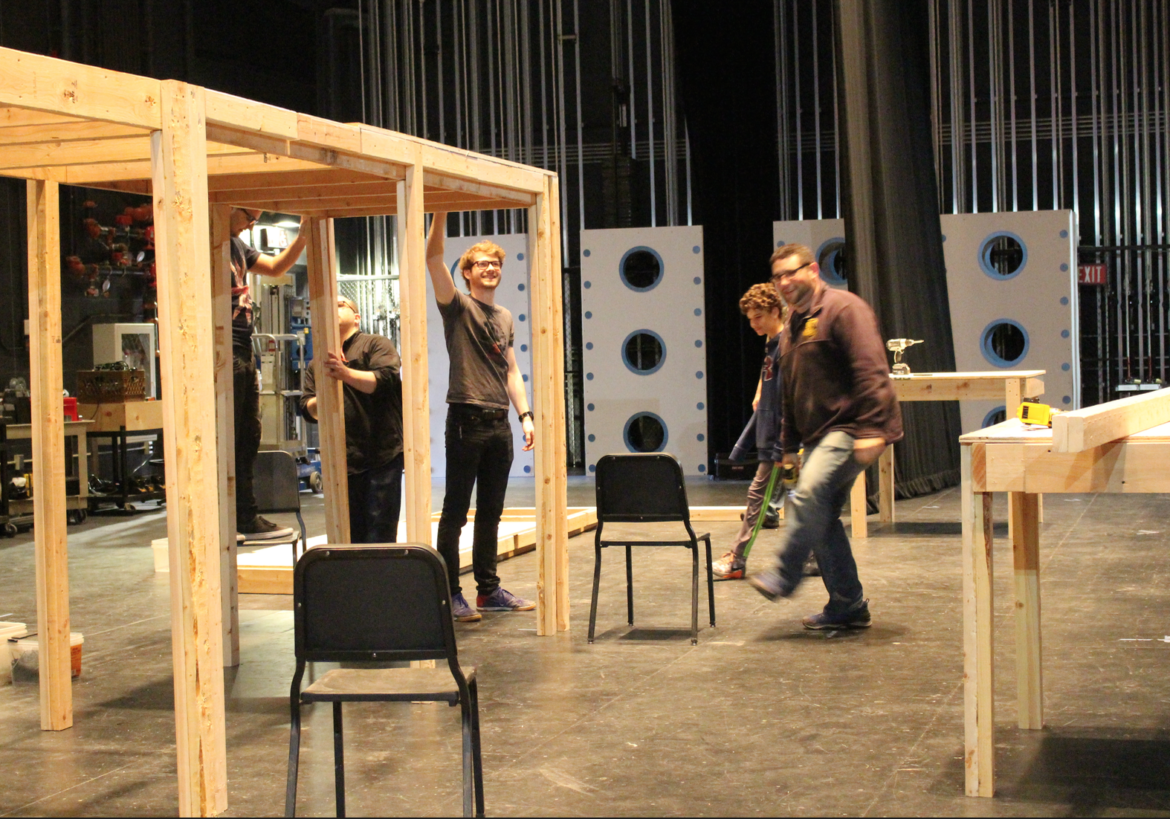 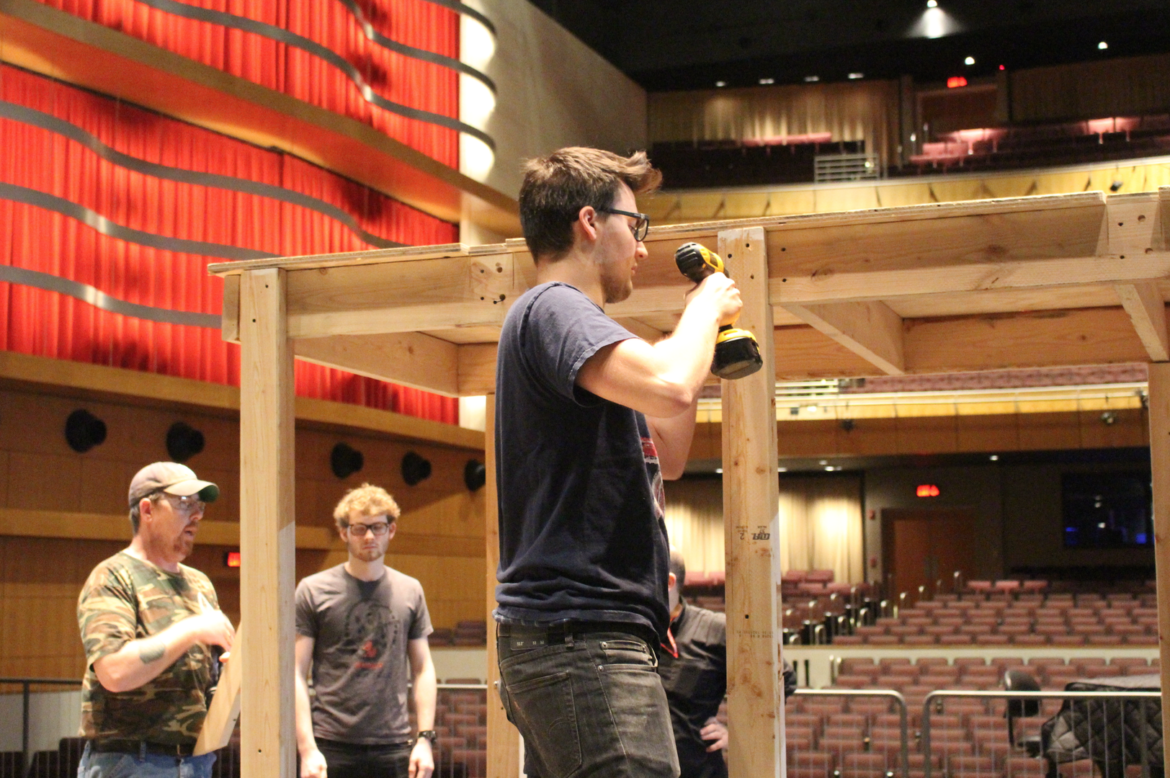 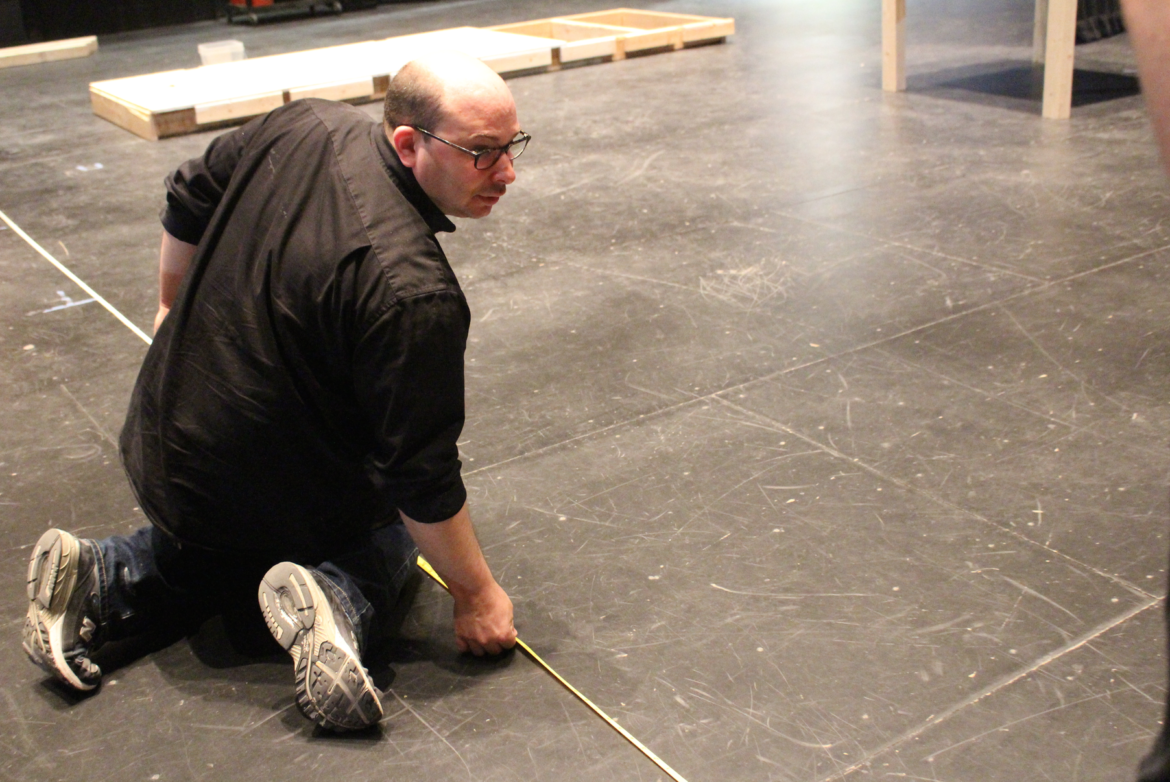 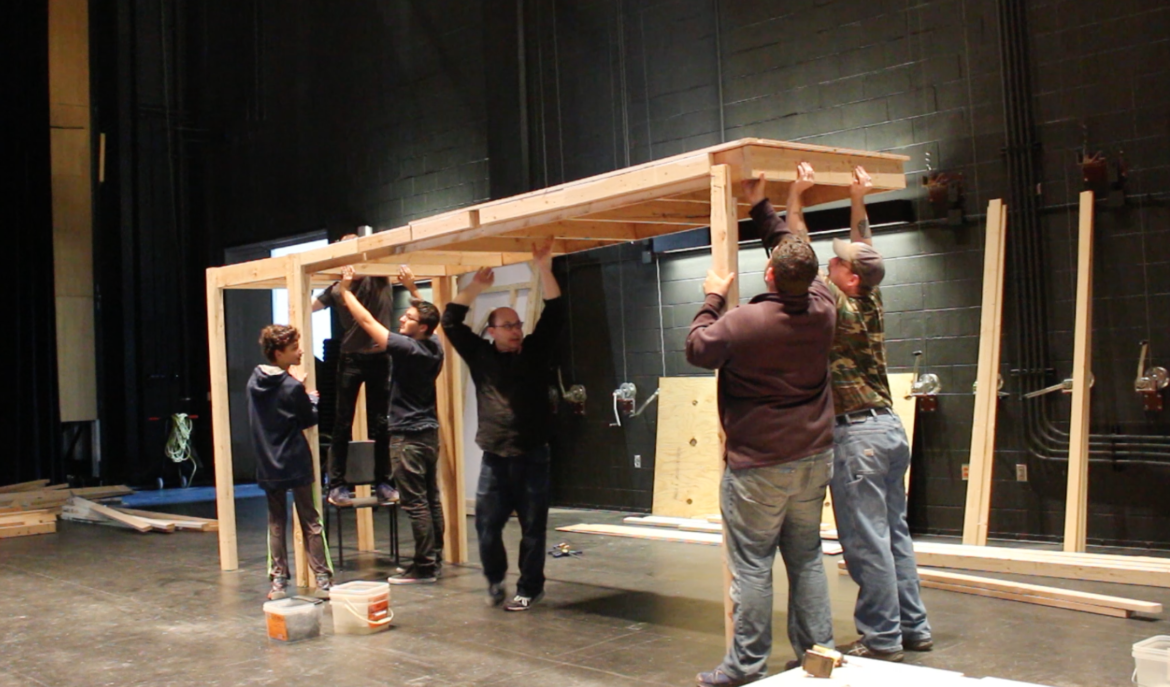