Soufflés really aren’t that hard to make. To make sure that your soufflés rise always use eggs at room temperature and make sure you don’t over-fold your mixture before baking. 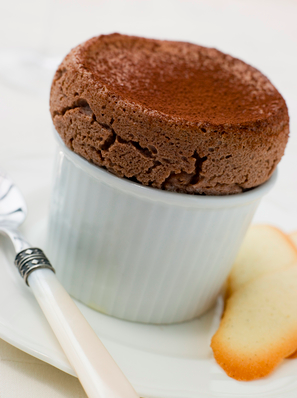 Preheat your oven to 375 degrees. Grease 4 ramekins with butter and add a small amount of sugar. Turn to coat the sides and bottom. Tap out any excess. In a small-size saucepan heat 1 cup milk with butter and vanilla seeds over a medium-low heat. In a small-size bowl mix remaining milk with flour until smooth. Stir into hot milk and simmer for 5 minutes. Stir continuously. Remove from heat and let cool slightly before mixing in chopped chocolate and 1 egg. Separate remaining 3 eggs. Beat egg whites with kosher salt to form peaks. Place in fridge and chill. Beat egg yolks with sugar and run until a thick, light mixture forms. Mix with cooled milk mixture. Tip beaten egg whites onto mixture and fold through (do not over-fold). Divide soufflé mixture equally between the four ramekins. Place in oven and bake for 10 to 20 minutes until puffy. Serve immediately. Serves 4