At The Center for Sexual Assault Crisis and Education, leaders recently talked about their visits to Greenwich High School where they are part of the health curriculum.

Outgoing director at The Center Ivonne Zucco said that in the past, the focus was on prevention and a victim’s responsibility.

“Advice was, ‘Don’t walk alone. Don’t dress a certain way. Don’t drink, and be careful who you’re hanging out with,’” Zucco said, adding that nowadays their focus is more on working with children at a young age on issues of empathy, personal boundaries and asking permission.

“We teach those skills very young,” Zucco said. “That may sound like it’s about sexual assault, but it’s actually a lesson about respect.”

Zucco said conversations about personal boundaries and permission translate down the road to speaking up and asking for consent.

These days, The Center for Sexual Assault Crisis and Education has an increased focus on boys, with the goal of increasing their emotional intelligence.

Zucco said the media, in the process of selling products and music, creates messages about treating women like objects.

“Real prevention will switch things around so that culturally these behaviors are not accepted,” said Quentin Ball, the incoming director at The Center, who is assuming Zucco’s role.

Ms. Ball said she previously worked at a school for children ages 4-13, and that emphasis was placed on social emotional learning.

“The challenge is to combat images in society of how boys should behave to be masculine – boys aren’t supposed to cry,” she said. “We focused on ways to express feelings and emotions.”

Ball said that images of men in society can result in boys having low emotional intelligence coupled with high entitlement.

In the context of sexual assault and sexual harassment, Ball said this culture effects boys as much as girls.

“Boys have a hard time connecting with their emotions because they’re not allowed to,” she continued. “When incidents do happen, we want to make sure guys can identify them, not be bystanders, and step up.” 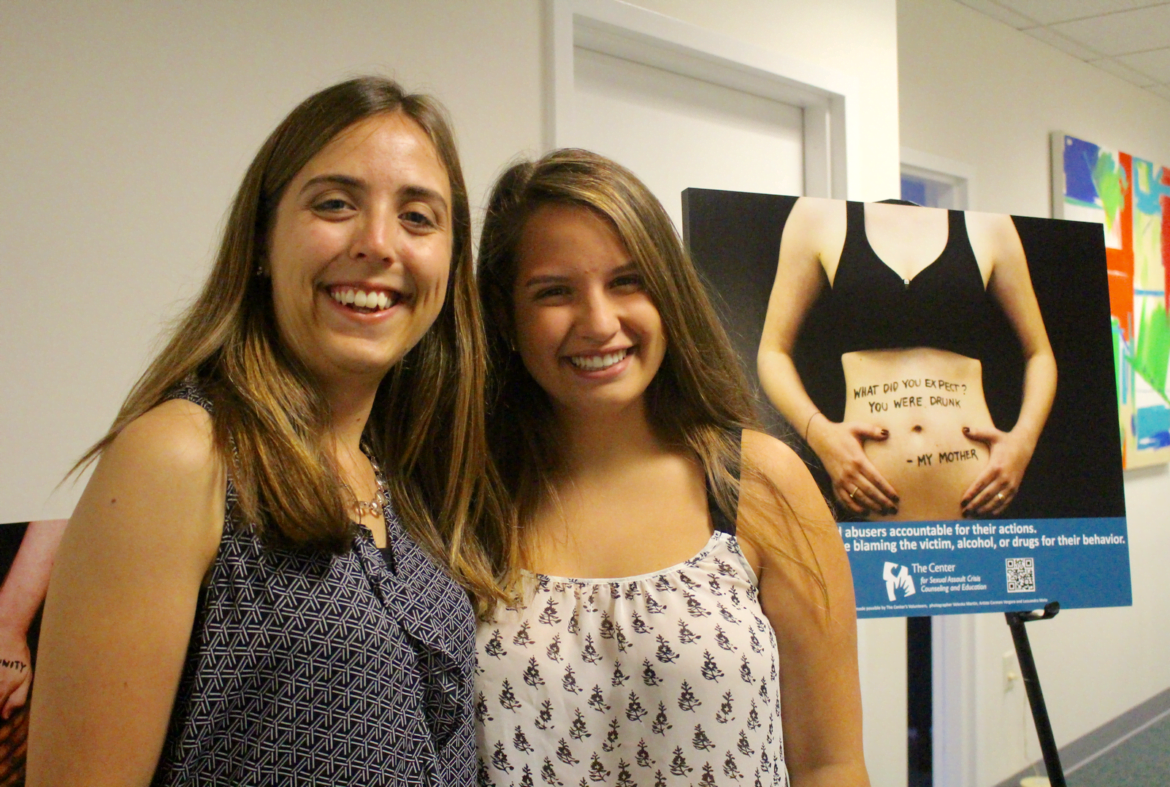 Ginger Furey and Rosanna Neri at The Center for Sexual Assault Crisis and Education in Stamford.

Know Before You Go (to College)

The Center also has a program for teens entering college called Know Before You Go, which is part of the health curriculum at GHS.

The presentation encourages students to inquire about resources at campuses if they are a victim of sexual assault, as well what it means, how to recognize it, and what to do if  it happens to them or someone they know.

The presentation differentiates between reporting to the police versus campus authorities, and whether confidentiality is kept or not.

The presentation includes advice on what to look for, and questions to ask during college tours.

Zucco and Ball said their advice is to look on the schools’ websites for crime stats, and to factor in that colleges and universities have an interest in keeping their crime rates low.

They said it’s good to ask how are incidents handled, and whether they are dealt with internally or through an outsourced group.  And, they noted that when incidents are handled internally, they may not be reflected in the school’s official statistics.

Ms. Ball suggested that during a college tour it’s ideal to visit the office of security. “Ask them what they do in a case of sexual assault, and how it’s handled,” she said.

She also suggested visiting the office of student services.  “See if they have the blue light system,” she said. “Most schools do have them. You use them if you feel someone is following you, or if you’re afraid. Or if someone attacks you. It triggers the security office.”

Also, Ms. Ball suggested inquiring about whether the school has an introductory presentation to freshmen on policies and behavior concerning sexual assault.

“Whether they’re faculty or trained staff, whether they have a sexual assault response team that handles reports of sexual abuse,” Ms. Ball said. “Schools with these systems in place are in better position to respond.” 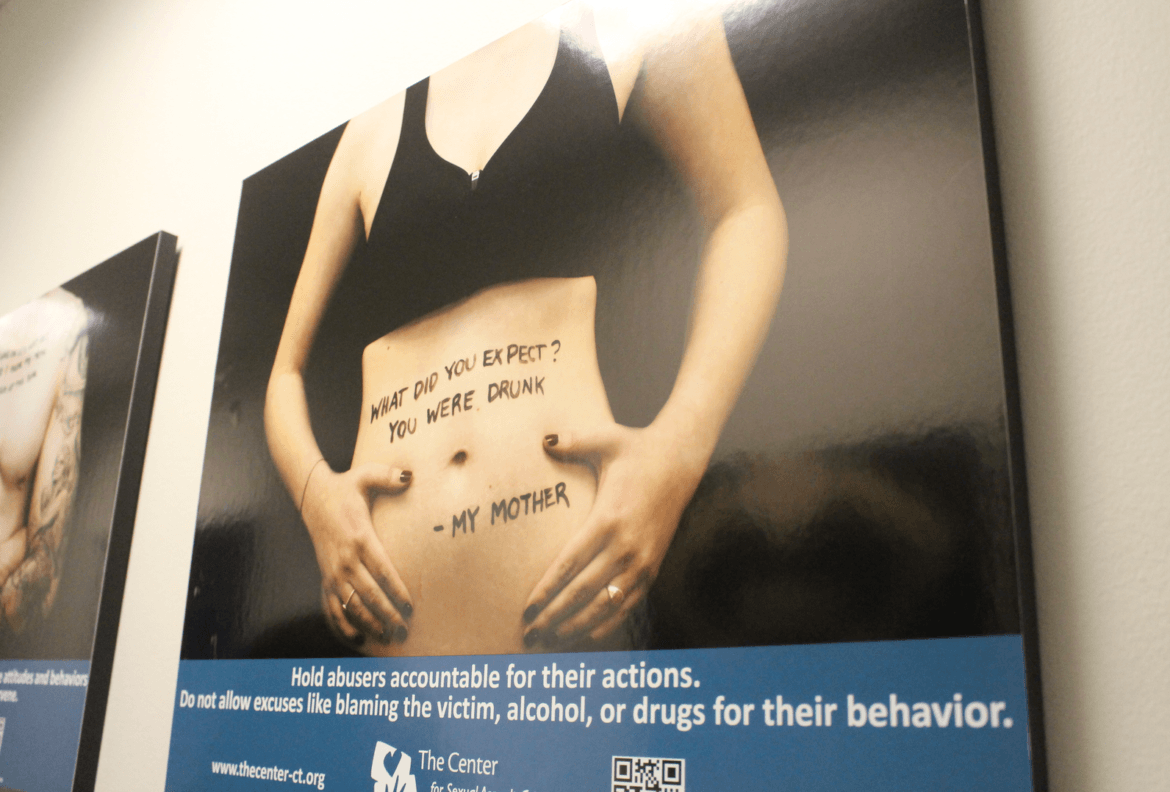 College Parties
Ms. Ball said it’s normal to want to attend parties in college, but there are precautions to take.

“Make sure you have a support system that goes with you and who live with you,” she said, adding that she’d learned of cases where women were drugged at parties.

“They just wanted to have a good time, but when their friend started acting strange – instead of sticking with them – they said ‘You’re acting crazy, I’m leaving,'” Ball said. “If your friend only has one or two beers and then starts acting crazy, they need help.”

Ms. Ball said girls need to look after each other. “Even if your friend has too much to drink, stay and take care of them. Don’t leave them,” she said. 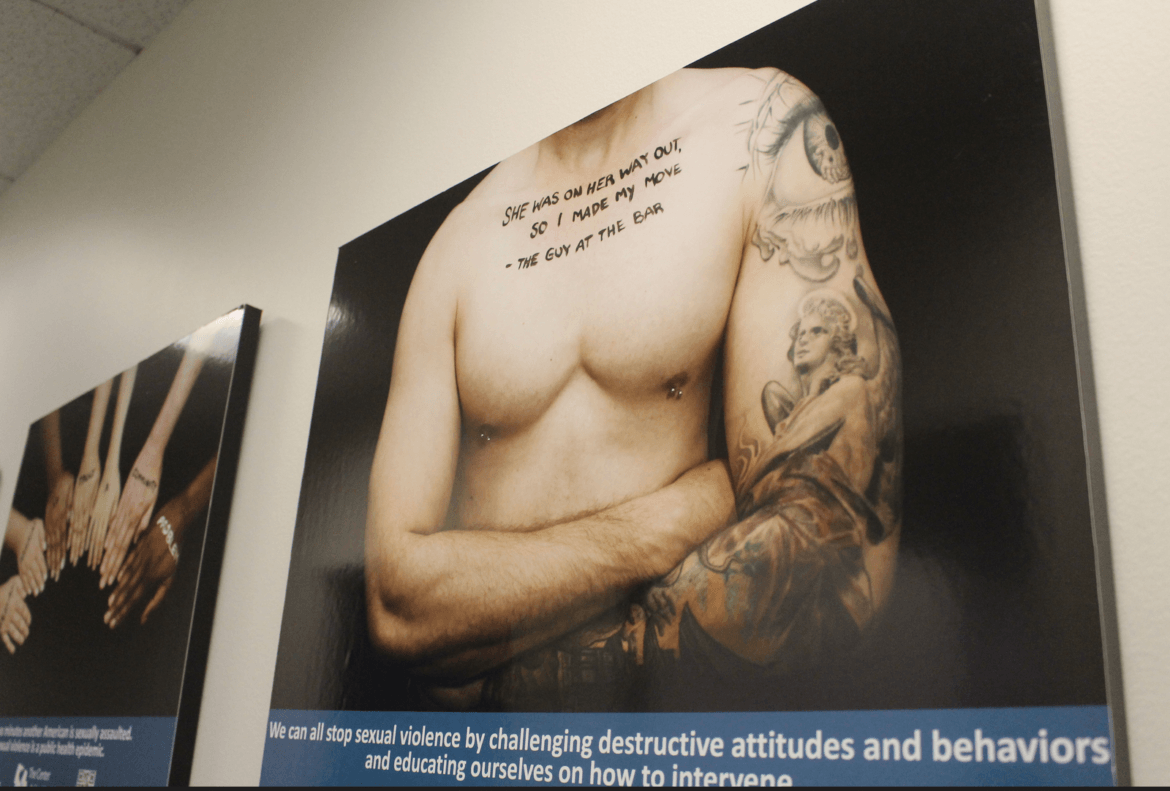 Sexual Assault
Ginger Furey, a prevention educator at The Center who regularly visits Greenwich High School junior and senior health classes, talked about responding “in the moment” to an inappropriate gesture or assault.

“Women are expected to have to have the right response in the moment,” she said, adding that a normal reaction is typically to freeze.

“Later, friends ask, ‘Why didn’t you say something? I would have said something.’ We’re expected to have these crafted responses.”

Ms. Zucco, Ms. Ball and Ms. Furey agreed it is hard to think on the spot.

“When you’re talking about human response to a situation of anger, your fight or fight response kicks in. But the most common response is the freeze response,” Ms. Zucco said. “The main goal in that moment is to preserve your immediate safety.”

The staff at the Center are strong proponents of the idea that one person can make a difference.

“Through your own personal education, if you can stop this from happening to one person, you’re altering the course of one person’s life,” Ms. Ball said. “But it can impact every aspect of their life, from their relationships – everything form  their sleep to their health overall.”

“Many social movements have started because of one person starting to do something,” Ms. Ball added.

At GHS, Ms. Furey said her experience has been very positive.

“What’s been interesting is the amount of questions I get,” she said. “This can be a hard topic to talk about, but the juniors and seniors have been very interested and engaged in what sexual assault looks like in our community, and how it’s not exactly what they’ve pictured.”

“We’ve had some heated conversations. …We talk about issues with alcohol and how alcohol affects consent, and what they need to look out for on campus, and how to take on sexual assault without losing social status,” Ms. Furey said.

“We talk about, ‘How far do we go before we speak up?’ Or ‘I know they didn’t want to go off with this person, should I say something?’ Particularly with the seniors, we spend a lot time talking about the culture that surrounds sexual assault in the media and songs that make it seem like some of these behaviors can be okay. Like these are just a part of being an 18 year old.”

Ms. Furey said the goal is to make conversations about consent not be awkward.

“If I’ve been with this person for three years –  ‘What do you mean do I have to ask for consent?’ Consent is not a forever thing,” she said. “Especially with the hookup culture. What if one person doesn’t want to hook up any more? That’s okay,” Furey continued. “Each interaction is a new interaction.”

“We try as much as possible to let them lead the conversation. Our role is to make it a safe place to speak openly,” Furey said.

She said there is discussion of the culture of “victim blaming” and that despite one’s best effort to minimize risk, sexual assault can happen to anyone.

“You can do everything right, and it can still happen,” she said, adding that at least, “Know if your school will take this on or not. Some schools have signs in the bathroom, this is something we have low tolerance for, and make it easy to report and they provide a phone number to call. On school visits, Furey suggested paying attention to the people and the culture of the school.

As for men on campus, there are ways to speak up when it counts, rather than be a bystander. “It doesn’t mean you’re ‘a sissy. We want to plant the seed, so that when the situation comes up, they’ll remember this conversation.”

Ms Furey said she enjoys her visits to GHS, and finds it a compliment when students tell her that in the moment, one of the scenarios they’ve discussed in school actually plays out. “They tell me taht they ask themselves, ‘What would Ginger say?’”