Anyone who’s ever tried to plan a surprise party knows how hard it is for people to keep mum, but on Friday afternoon the entire Western Middle School did precisely that.

At 2:00pm, the students and staff sat silently in the gymnasium and waited with the lights off.

When Mr. Beinstein strolled in, the lights came on, music played and the entire community cheered.

“He is such a determined person,” said Talia Klein and 8th graders at WMS. “His number one priority is us and the school, and to make us the best we can be.”

“He is definitely the number one support person for this school. He puts everyone above himself,” said 8th grader Jeslyn Vieira.

“Mr. Beinstein knows how to make a day at school more fun,” said 7th grader Avery Hirsh. “And he makes an effort to make connections with the students so we feel more comfortable.”

During the event which was a cross between a pep rally, surprise party and roast of s beloved principal, several student make remarks.

Brandon Yu, who presented Mr. Beinstein with a tie with a yellow  “W” for Western on it, said he is districted for Central Middle School, which is closer to his house.  And even though said he valued his sleep, he gets up 15 minutes earlier in the morning so he can attend Western.

“Ever since I met Mr. Beinstein three years ago I’ve never seen him without a smile on his face,” Brandon said.

“He really stays positive in any of the most difficult situations. I mean, how many principals actually go by ‘Shrek’ in front of 600 kids?” he asked, to another chorus of hollars. “I used to think middle school principals were all mean, strict and boring.”

Talia attributed Mr. Beinstein’s leadership to the school being “outgoing, courageous and amazing.”

“This person is always determined, jovial and caring for everyone here. Thank you for making this school what it is today and for also making this school better every day. We are not surprised you received the award of principal of the year.”

Jeslyn listed some of the words students use to describe Mr. Beinstein,  including vibrant, impactful, charismatic, goofy, boisterous, empathetic, dedicated and supportive.

Avery Hirsh also shared some fun facts about Mr. Beinstein that many people were unaware of.

“He is one of six children, two of which were adopted from Vietnam and Korea. Prior to being a principal, he was a teacher. Prior to that he was a bouncer in a bar. Although, when those times were over, he worked only in middle schools – working four separate districts, at five different schools.

“There are many breeds of dogs out there, but Mr. Beinstein has only ever had pit bulls,” Avery said. “And, an obvious one – he loves funky ties, but most of them are gifts. For obvious reasons, his favorite type of bird is a Bald Eagle,” said to a chorus of laughter. “His favorite baseball team is the Yankees.”

Mr. Beinstein had the last word. First apologizing for not wearing his “best camo,” he said.

“Western is a special place because of all of you and I’m proud to work here,” he said. 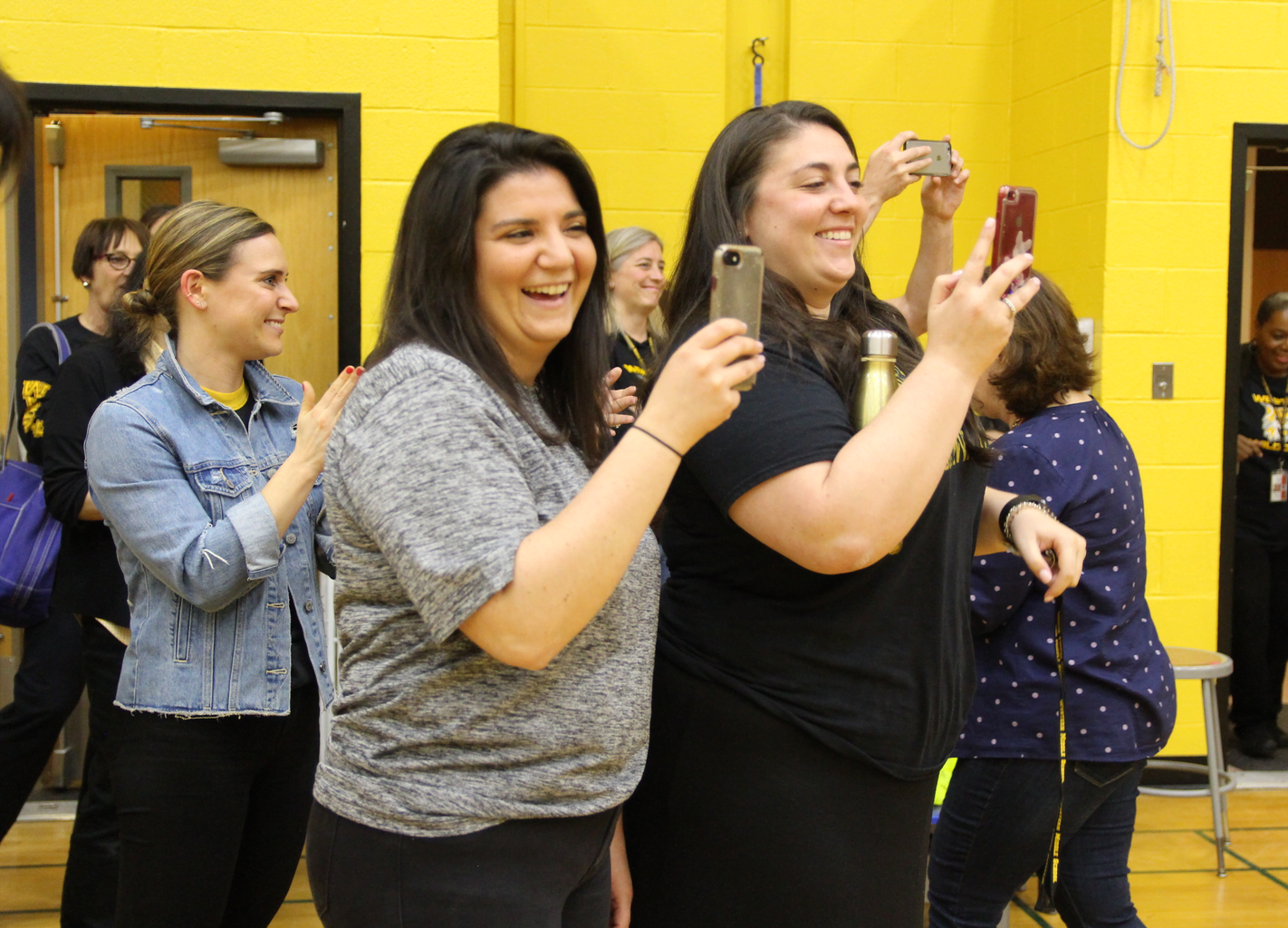 All the teachers photographed Mr. Beinstein’s surprised look as he walked into the gym to be surprised by the entire school community in honor of being named principal of the year. May 17, 2019 Photo: Leslie Yager 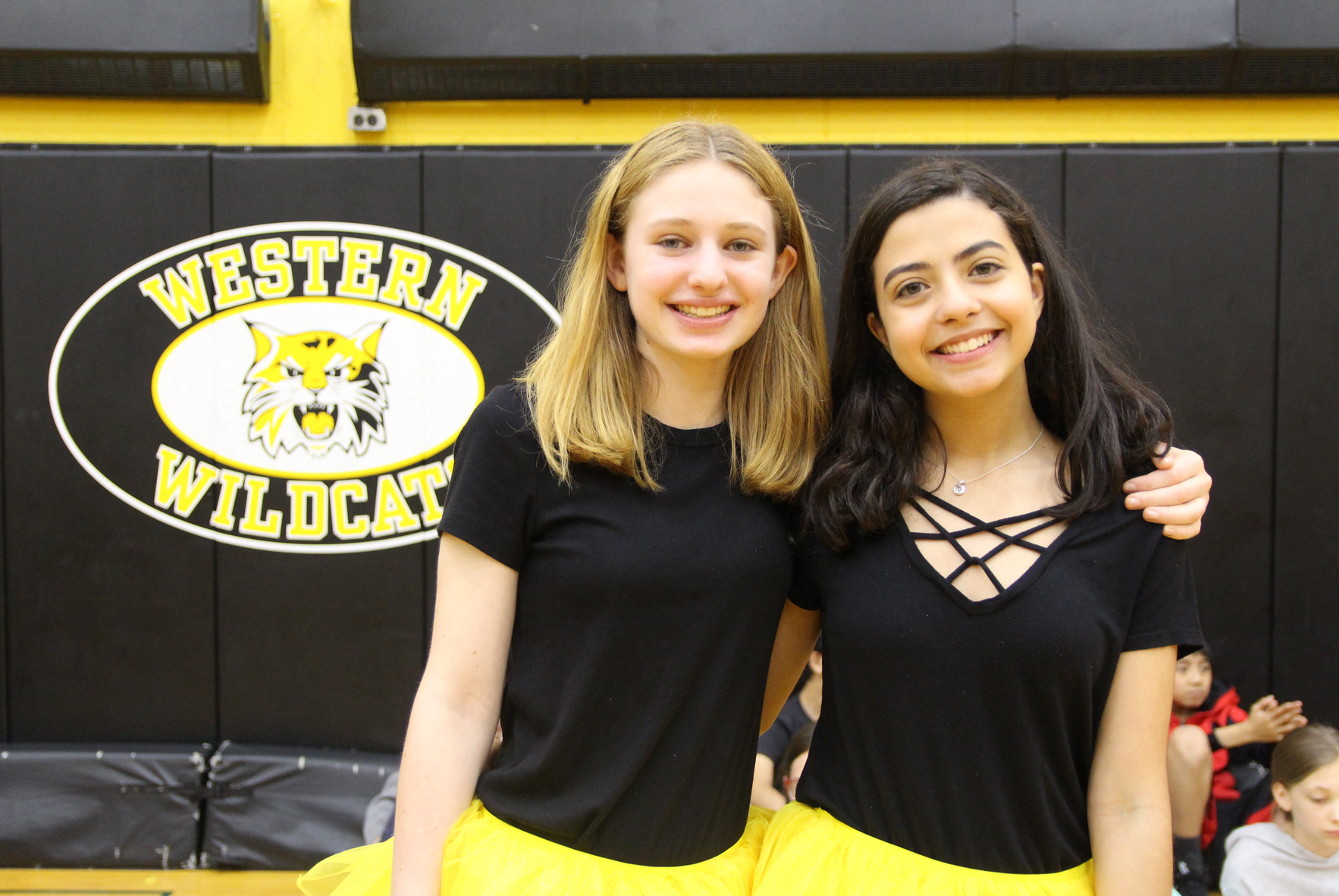 Talia Klein and Jeslyn Vieira, both 8th graders, were decked out in the school colors waiting for Mr. Beinstein to be surprised in honor of him being named principal of the year. May 17, 2019 Photo: Leslie yager 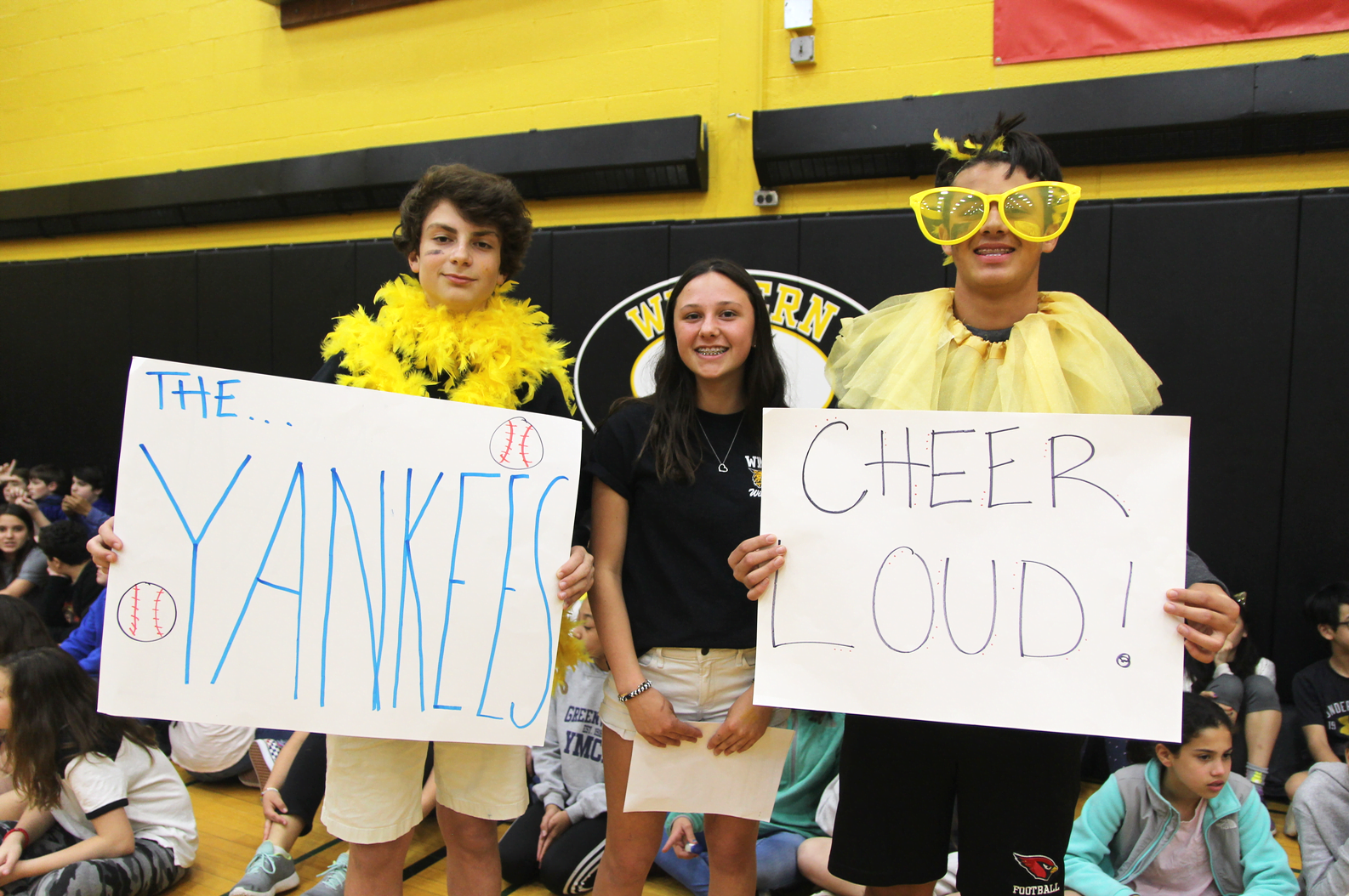 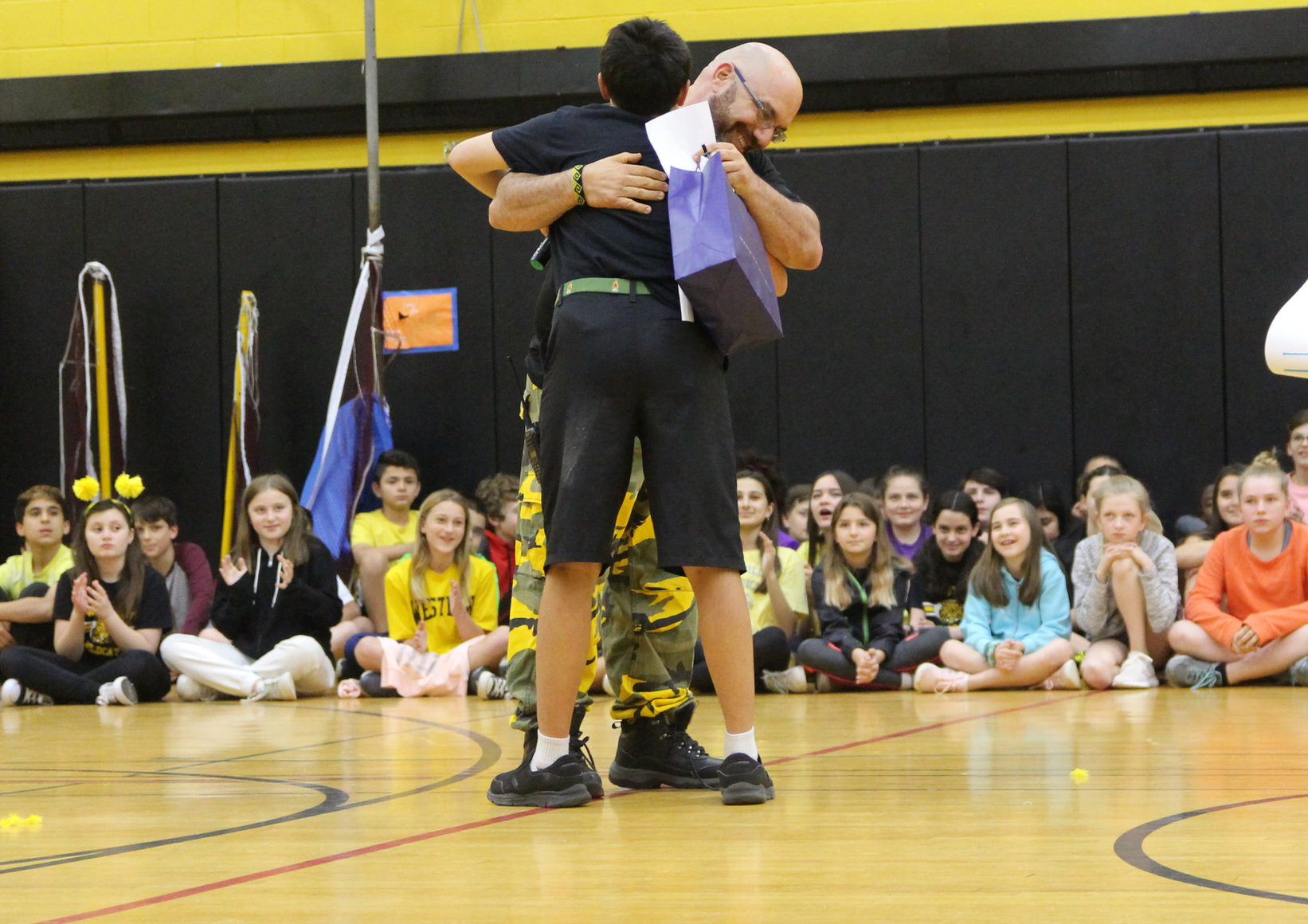 WMS principal Gordon Beinstein gets a hug from Brandon Yu during a surprise rally for him winning principal of the year. May 17, 2019 Photo: Leslie Yager 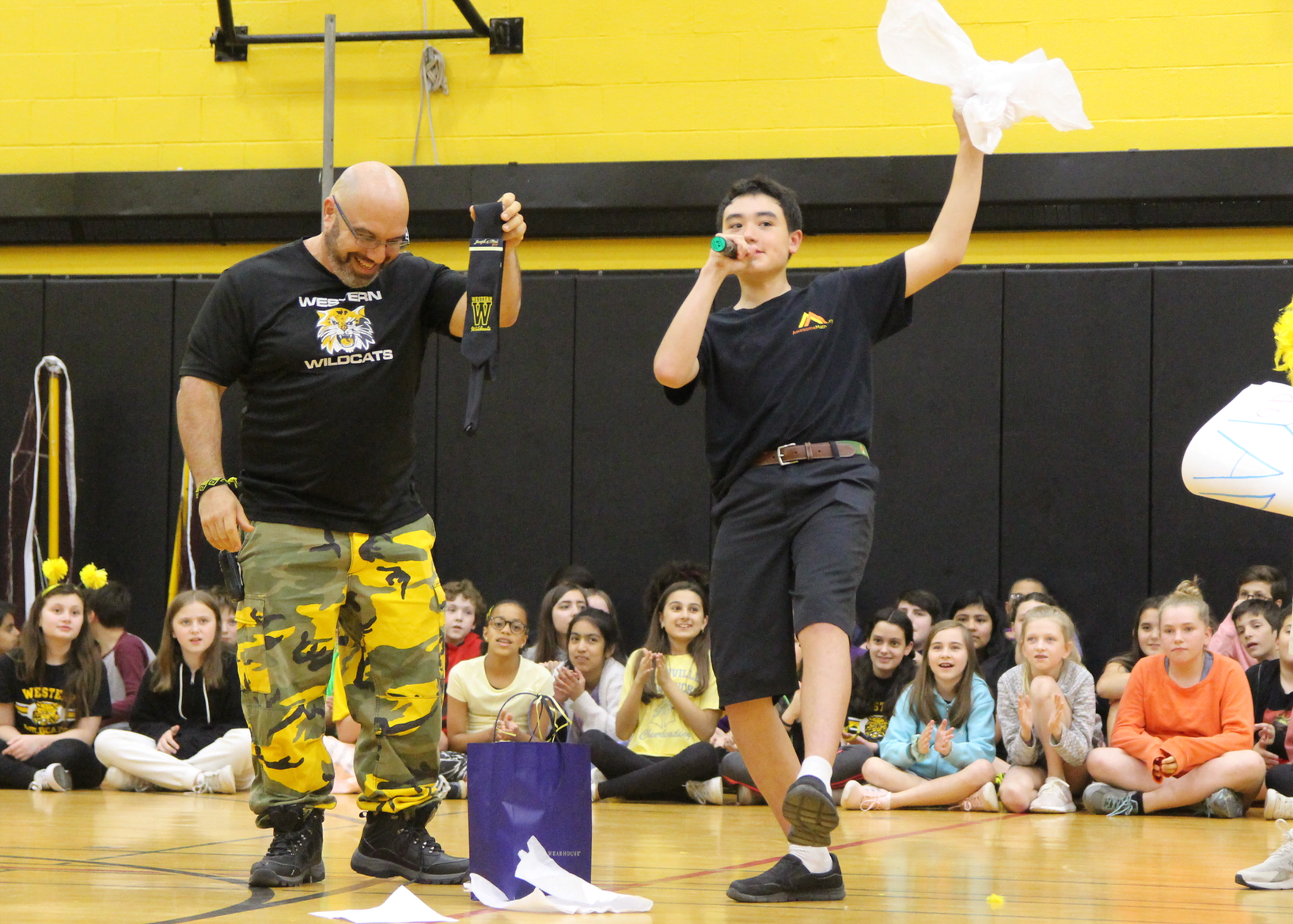 WMS principal Gordon Beinstein holds up a tie presented by Brandon Yu during a surprise rally for Beinstein winning principal of the year. May 17, 2019 Photo: Leslie Yager 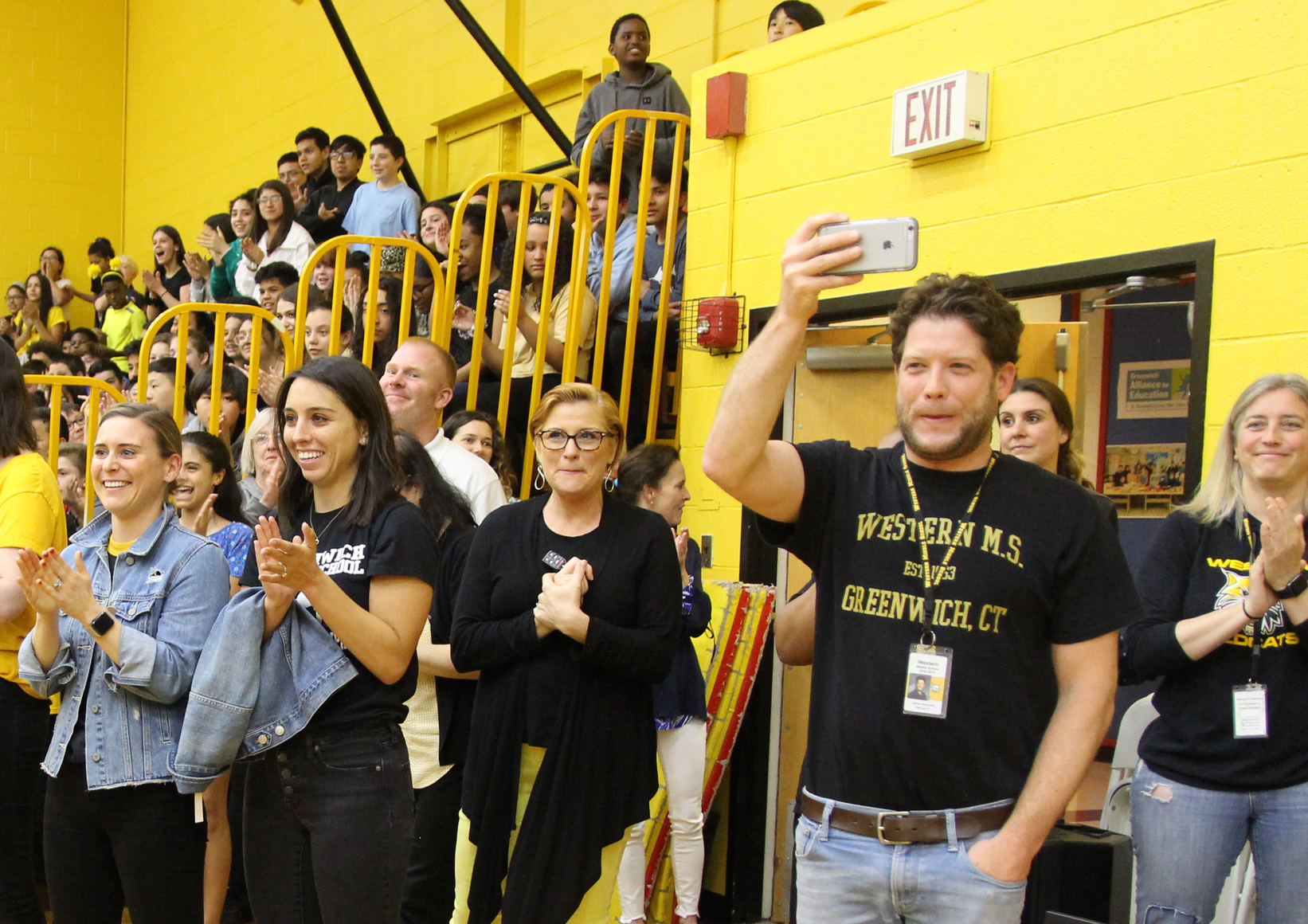 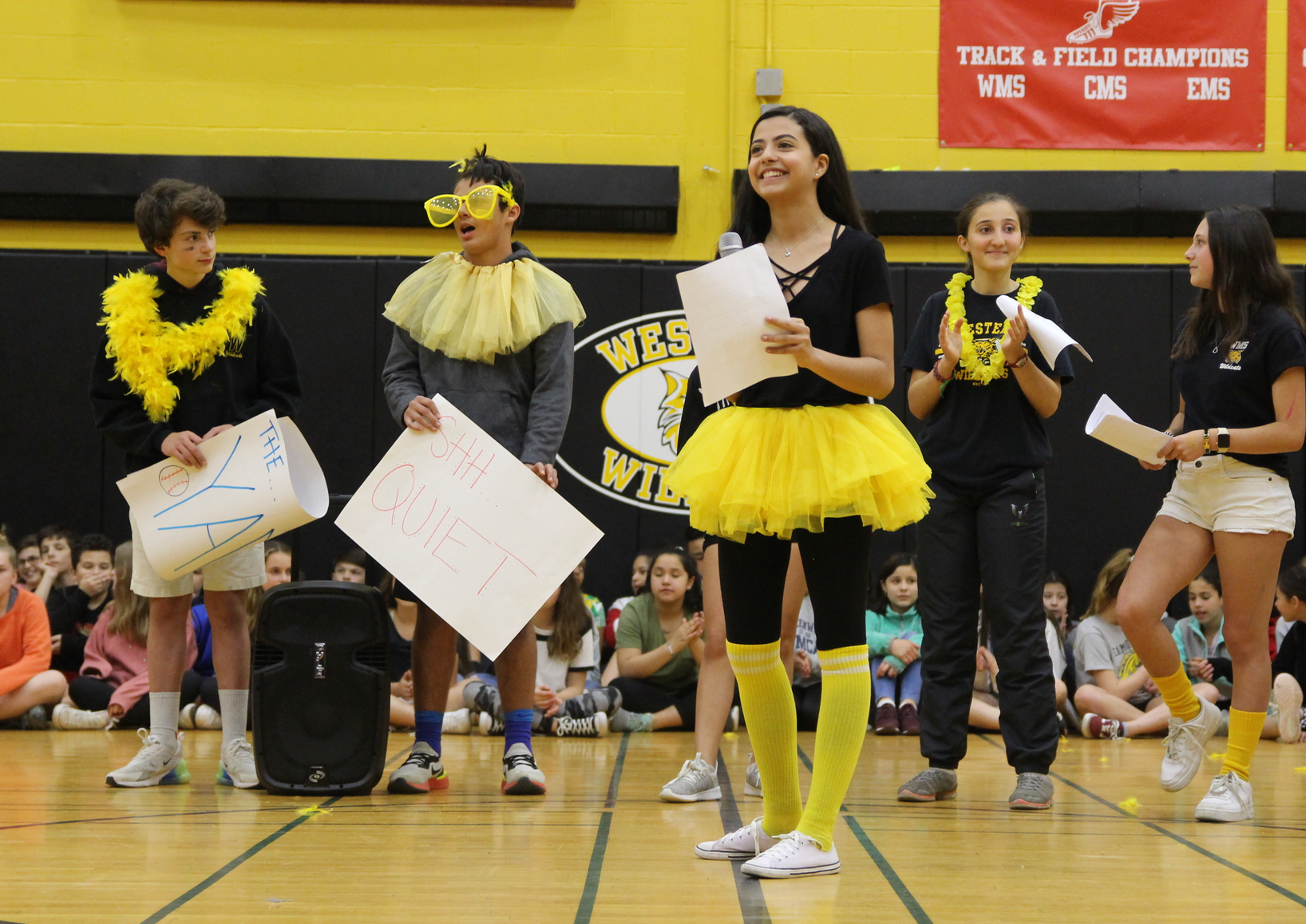 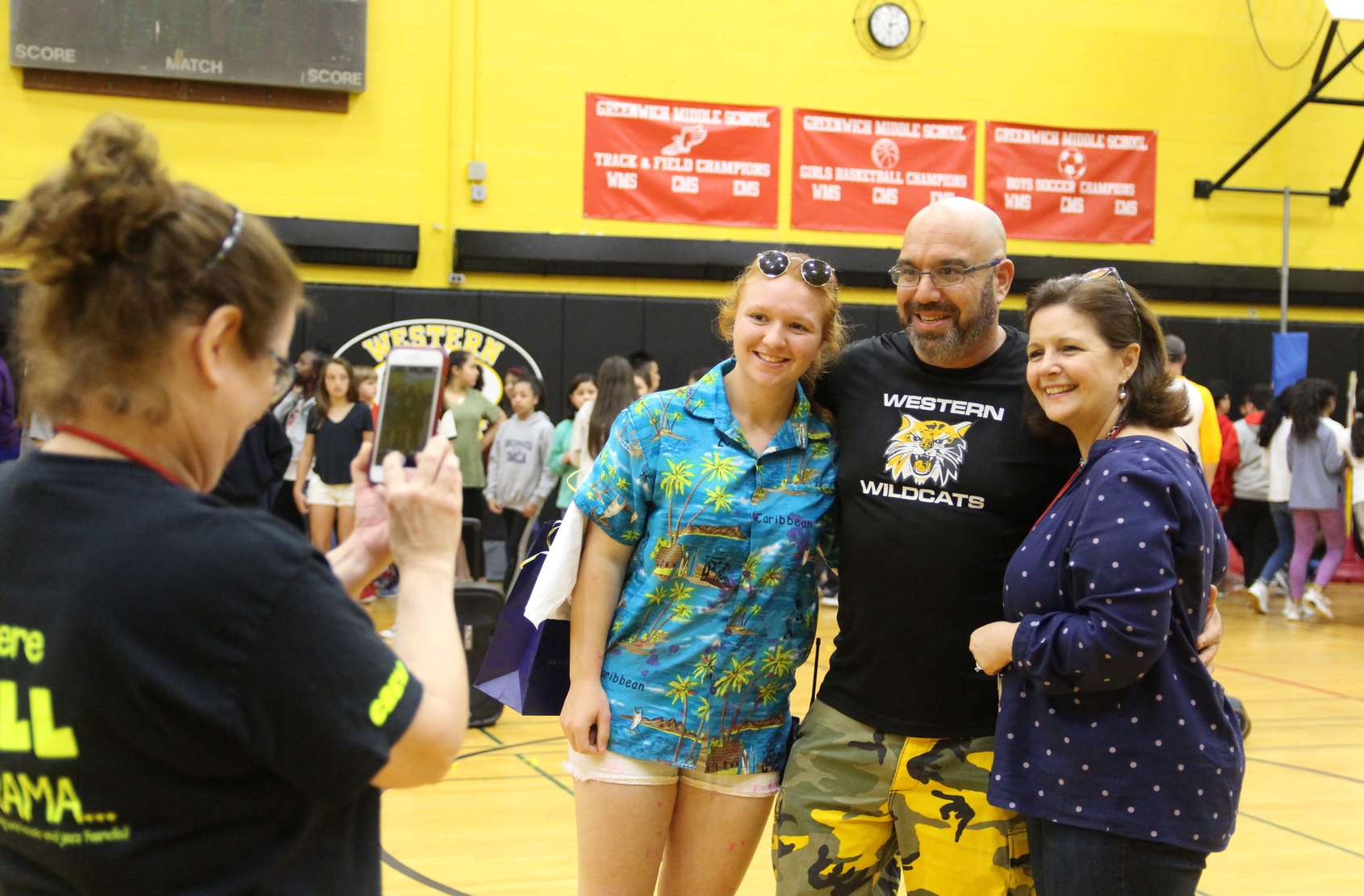 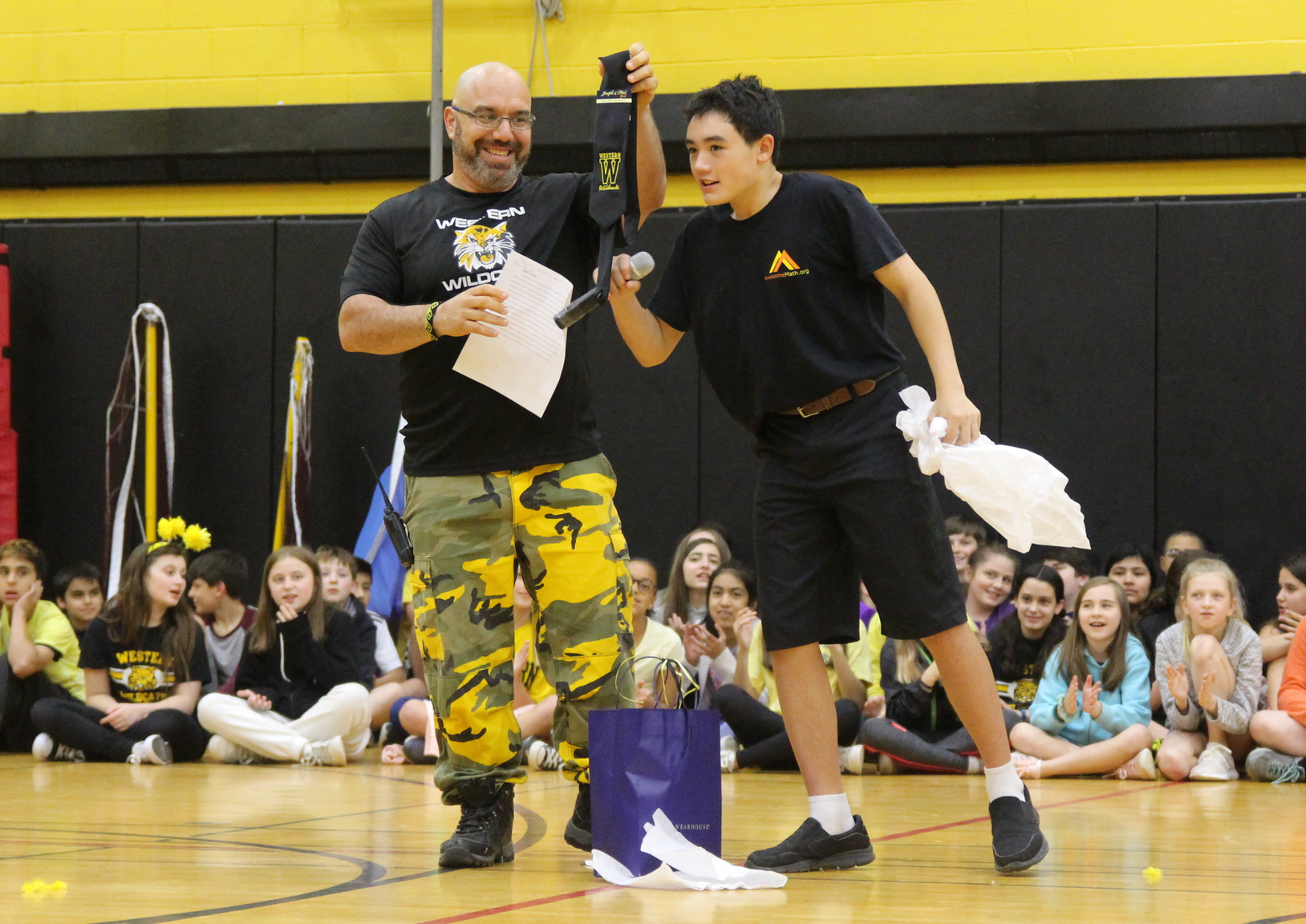