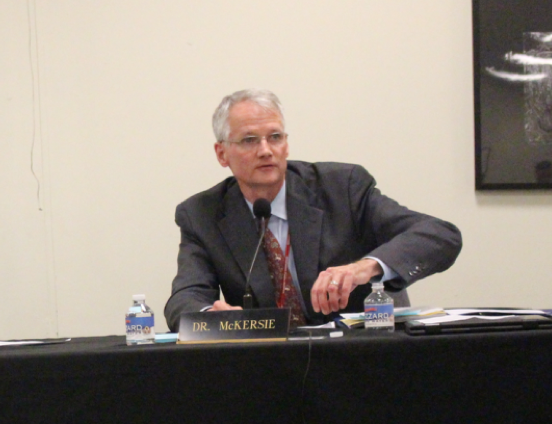 “It would be an honor to lead the Weston Public Schools, which is known as one of the premier school districts in New England and nationally,” McKersie said. “Like Greenwich, the Weston community sets the highest of expectations and provides its schools superb support. Greenwich always will have a special place in my heart and mind-for all that the town and school system stands for and achieves.”

Greenwich Board of Education Chair Laura Erickson announced on Friday, April 22 that Dr. McKersie would not be seeking renewal of his contract ending June 2017, noting that, “by several measures, the district is in a much better place than when the Superintendent arrived four years ago and has benefited from a period of stable leadership.”

Erickson added, “I congratulate Dr. McKersie on being the finalist to lead the Weston Public Schools, and we will work closely with him over the next several months to ensure the pending transition will be a smooth one for the Greenwich Public Schools.”

According to the Weston release, “Dr. McKersie’s candidacy is subject to a satisfactory site visit, background check, and formal appointment by the [Weston] Board in its May regularly scheduled meeting, and anticipate[s] that he will begin in Weston in early August.”

An educator for over thirty-four years, Dr. McKersie has been Superintendent of the Greenwich Public Schools (GPS) since July 2012.

He has led the GPS through the development of a five-year Strategic Plan, the implementation of a digital learning environment, the alignment of core academic curriculum to the CT Core Standards, and the advancement of a comprehensive assessment system, including the introduction of an academic growth model. Dr. McKersie was successful in obtaining the State Board of Education’s approval for the Greenwich Racial Balance Plan, which includes a renewal of the magnet school themes, a focus on narrowing the achievement gap, a new facility for the New Lebanon School community and a renewed commitment to neighborhood schools.

Prior to joining the Greenwich Public Schools in 2012, Dr. McKersie was the Associate Superintendent for Academic Excellence for the Archdiocese of Boston (2008-2012), where he was responsible for providing the strategic direction to promote and ensure academic excellence, mission effectiveness, fiscal sustainability and school vitality in each of the 122 schools.

Additionally, in 2010, Dr. McKersie served as one of 70 nationally-selected peer reviewers for the first and second rounds of the Race to the Top Grant Competition. He was also selected to chair the state finalist interviews in both rounds.

Dr. McKersie began his career as an Admissions Officer, and faculty member of the Northfield Mount Hermon School in Northfield, MA. In 1986, he became the Program Officer for the Joyce Foundation in Chicago IL, and then the Senior Program Officer in 1989.

From 1990 to 1997, Dr. McKersie was an Education Policy Consultant for a variety of educational organizations and commissions (1990-1993), including Education Commission of the States (Denver, CO), Recruiting New Teachers (Cambridge, MA), and the John D. and Catherine T. MacArthur Foundation (Chicago, IL). He was an instructor at the University of Chicago, Chicago, IL from 1994-1995.

In 1997, Dr. McKersie became the Senior Program Director for The Cleveland Foundation, the world’s first community foundation, and the nation’s third largest, with assets of $1.9 billion and annual grant making of $85 million.

From 2002-2004, Dr. McKersie led a transformation project of Cleveland Heights High School in Cleveland Heights, OH, as part of a statewide initiative funded by the Bill and Melinda Gates Foundation in partnership with the Knowledge Works Foundation.

In 2004, Dr. McKersie became the Associate Dean for Development and Alumni Relations for Harvard University’s Graduate School of Education. In this position he secured over $30 million in gifts and pledges including the school’s largest single gift of $12 million to support the educational research, leadership, and policymaking.

McKersie Will Not Renew Contract with Greenwich Public Schools