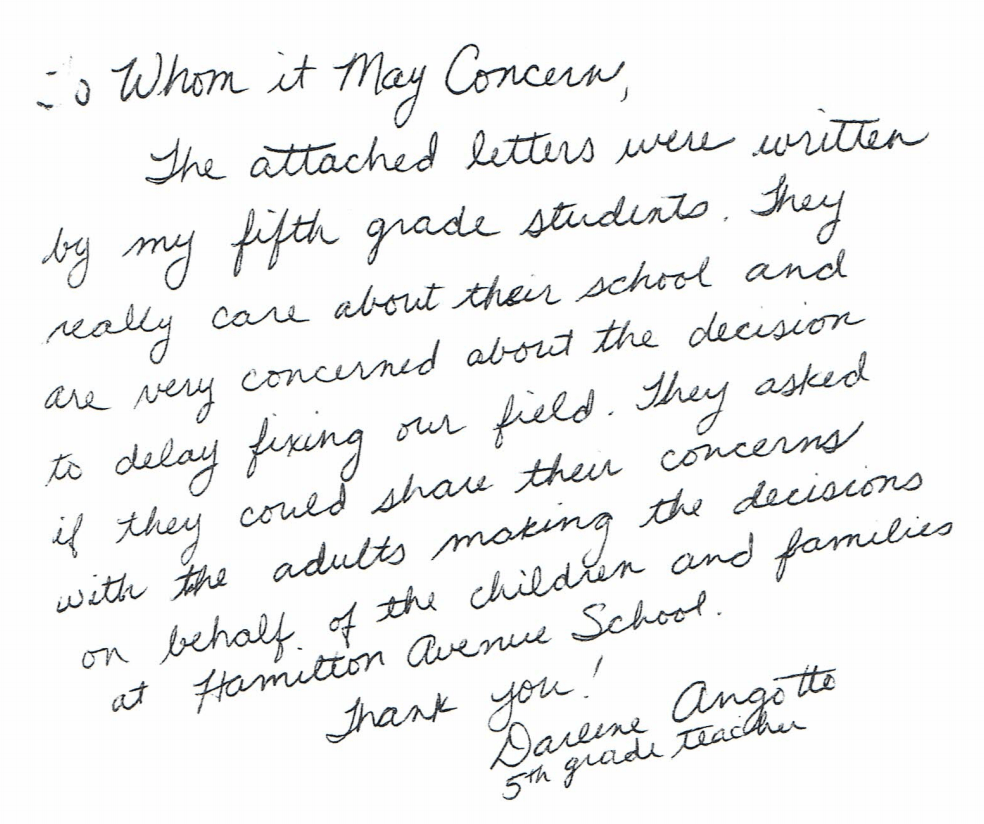 Fifth graders from Hamilton Avenue School banned together to write open letters to the Board of Estimate and Taxation, Parks & Rec board, and Board of Education.

The letters, which are addressed “to the editor,” lament the sorry state of the field which was left damaged nine years ago during construction of the new school house.

The letters, which were received by Greenwich Free Press on April 3, were first mentioned at the March 23 Board of Education meeting by longtime Chickahominy residents Syl Pecora and Dave D’Andrea.

Mr. Pecora, who has been a consistent advocate for repairs to the field during public hearings over the years, did not mince words.

“I have no more words to try to convince you how we need the field at Hamilton Avenue this summer,” he said on March 23. He said he’d heard from members of the community that they weren’t surprised that the project was eliminated from the budget. “‘What is the matter with you? Don’t you know where the school is? Do you think they care about us in Chickahominy?'” he recalled residents saying. “The western end of town always gets the shaft.'”

Of the 31 letters from the Hamilton Ave 5th graders, Mr. Pecora told the Board of Education, “I do expect you to read every single one of them.”

“If this field is not fixed by next summer – ten years after the school was built – the Board of Education, the BET and Town as a whole all should be ashamed of themselves,” Pecora concluded.

Dave D’Andrea said he had worked in horticulture and turf management, as well as facility management for the Town of Greenwich for many years,  and wanted to add a professional perspective.

“I want to see a project that is done once, and done right – not a bandaid approach,” he said. “I understand the budgetary restraints, needs and processes. I’ve been there and done it.”

But, he said, “Some of my input could have saved you a couple hundred thousand dollars. I felt insulted, being a professional in the industry. Hopefully you will include us in the process.”

D’Andrea urged the Board to include the community in the project, and pointed out that he has spent 65 years in the Chickahominy community, having attended Hamilton Avenue school himself.

“I have no players in the game. My children are grown,” he said. “I don’t want to hear the excuse that came from the BET that it’s too small of a field for a school.”

D’Andrea said as he was growing up in Chickahominy, there were always 70 to 80 kids playing on the Hamilton Avenue School field on weekends.

“We accepted whatever size you gave us, we made due of it,” D’Andrea said. “Whether it was playing football, baseball or soccer. We had a blast, not matter what size. Don’t worry about the size. It’s all about the quality.”

The letters, which were compiled by longtime 5th grade teacher Darlene Angotto, lament the sorry condition of the school field.

Following are excerpts from a representation of the 31 student letters.

Among the themes are the holes in the field, its uneven surface, lack of drainage and puddles.

Students also mention that the poor condition of the field is a disincentive to dog owners to pick up after their pets.

“Please fix our field! Our field should be fixed because when they were doing construction on the field, the trucks made A LOT of holes,” one student wrote. “When some kids play soccer, they trip on some of them. …I have been to other schools and their fields are really neat, with no holes in  them. So, if you fixed their schools, why can’t you fix ours?” 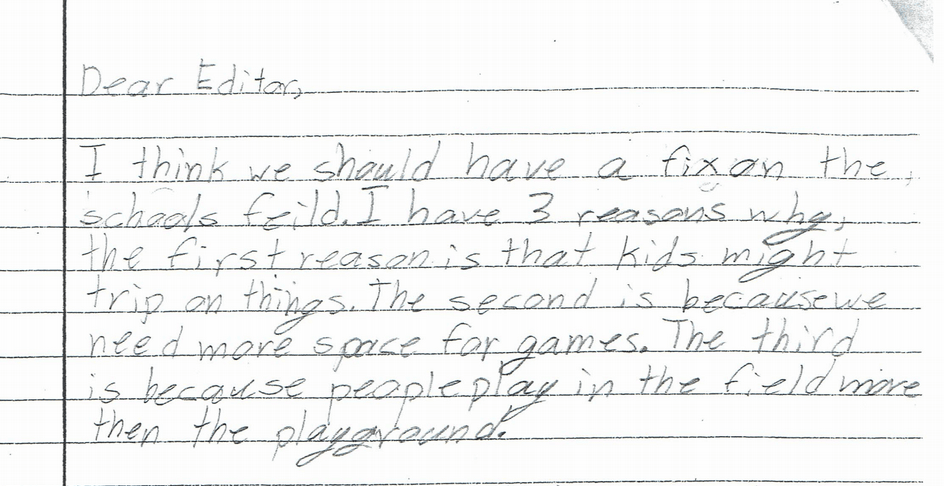 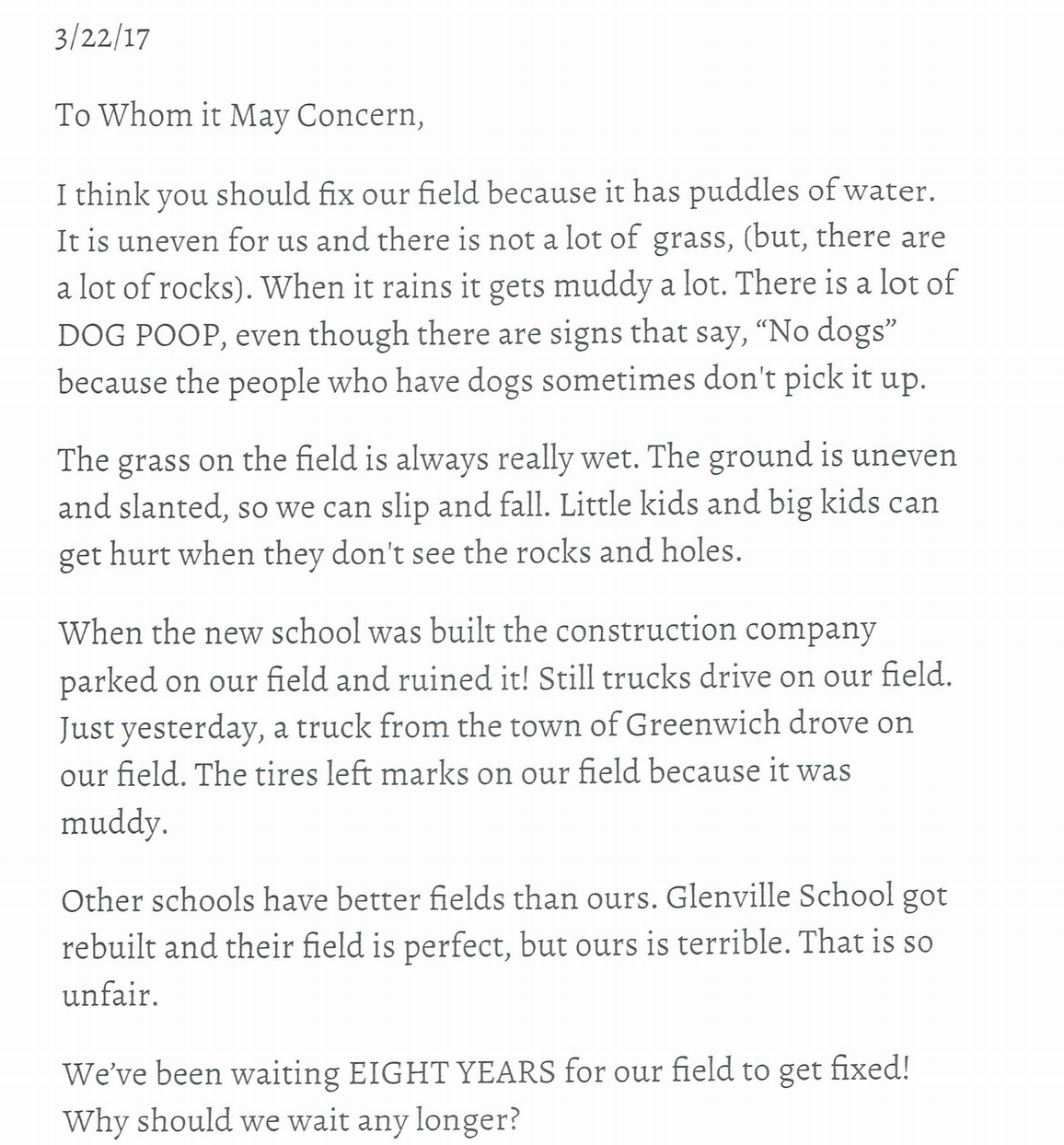 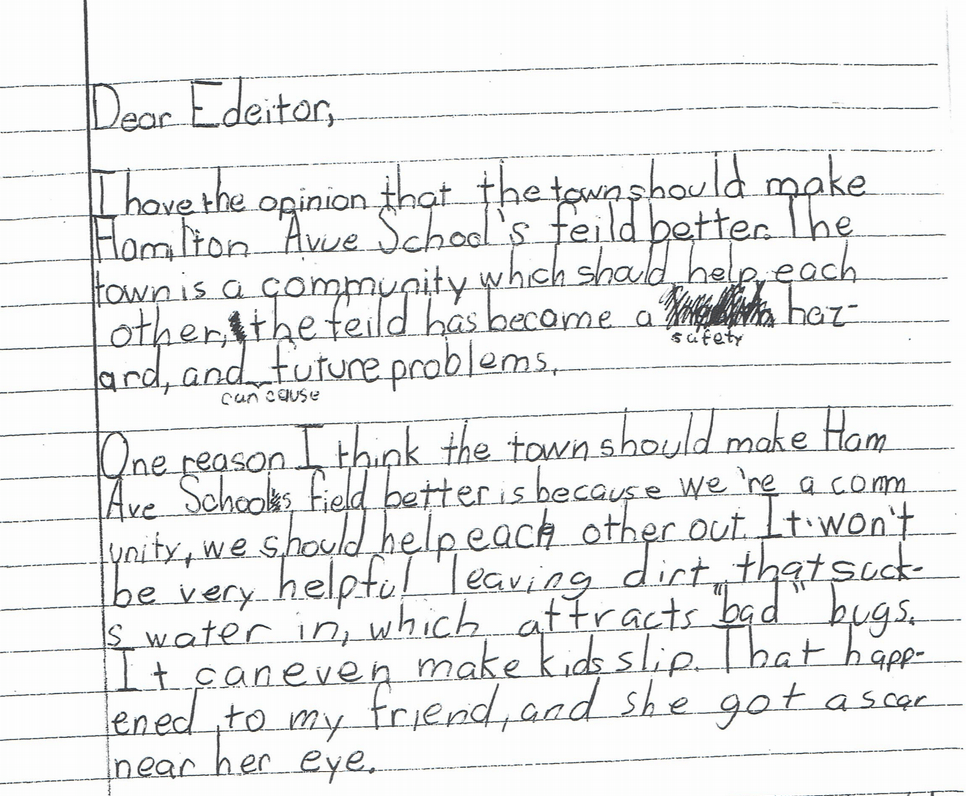 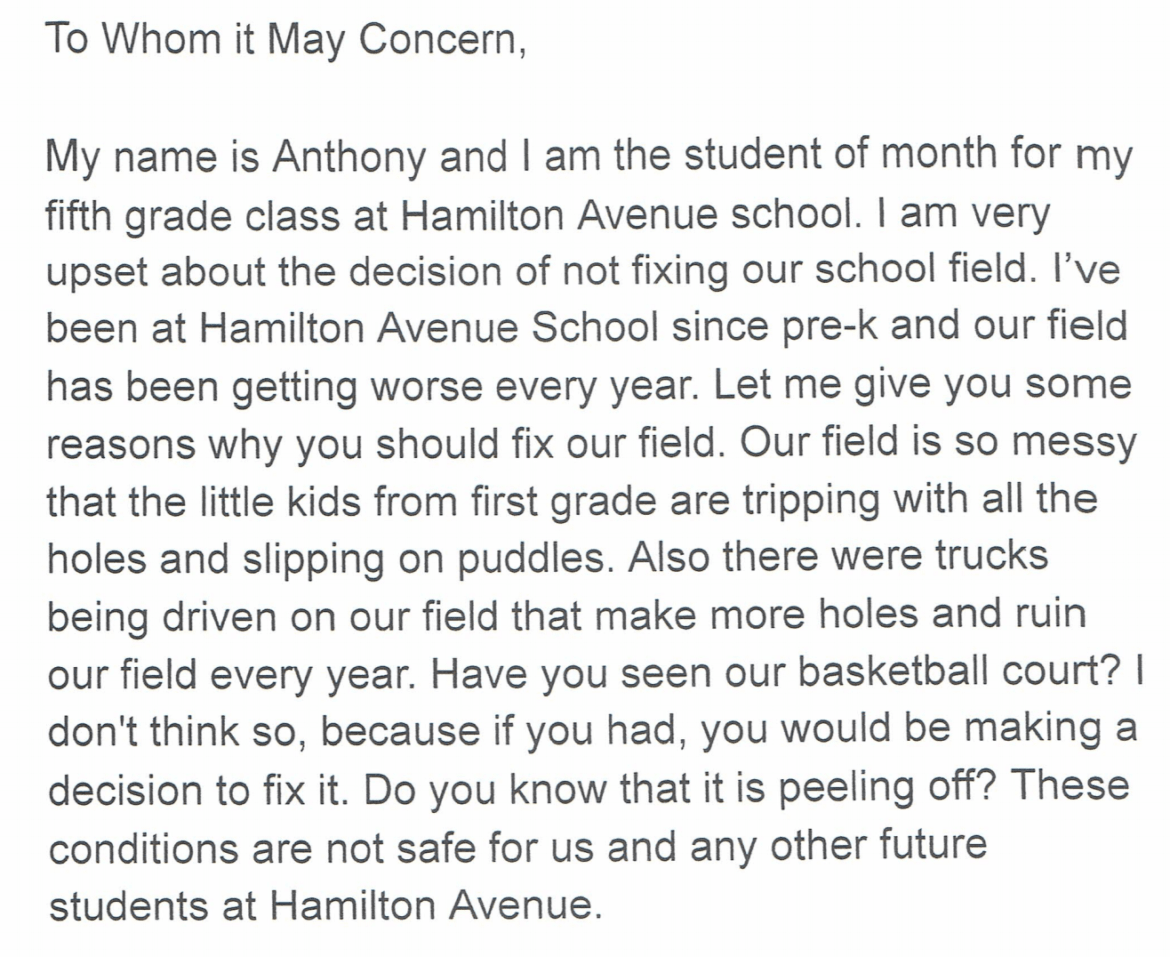 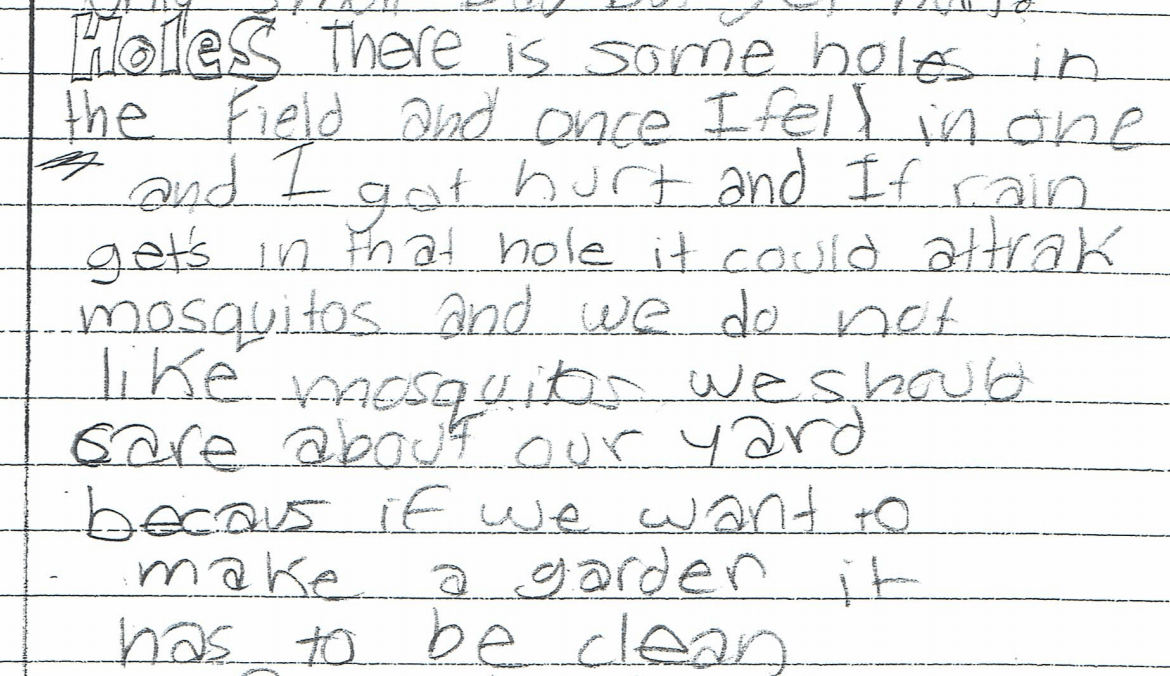 Parks & Rec Fields Update: Swinging in the Wind on Three Fields on West Side of Town