On May 18, 2017, The Harlan Institute and The Constitutional Sources Project (ConSource) hosted the championship round of the fifth annual National Virtual Supreme Court Competition for high school students.

Two teams of students argued the case of Trinity Lutheran Church v. Comer in front of a panel of nine judges in a small-scale replica of the courtroom at the US Supreme Court.

Lucy Mini and Arjun Ahuja from Greenwich High School argued on behalf of the petitioners.

Students from Lake Oswego High School in Lake Oswego, Oregon argued on behalf of the respondents.

To reach the championship round, these outstanding students had to compete against dozens of teams from all corners of the continental United States. Ahuha and Mini and Chang and Austin not only submitted the best-written appellate briefs, but also proved to be the most able oral advocates in the preliminary oral argument rounds.

Their skills were put to the test during the championship round where, during oral argument in front of a lively panel of nine distinguished judges, the students had to respond to rapid fire and complex legal questions. The competition was judged by Honorable Andre Davis, United States Court of Appeals for the Fourth Circuit; Honorable Meg Ryan, United States Court of Appeals for the Armed Forces; Honorable Royce Lamberth, United States District Court for the District of Columbia; Ilya Shapiro, Senior Fellow in Constitutional Studies at the Cato Institute; Elizabeth Wydra, President of the Constitutional Accountability Center; Shon Hopwood, Georgetown University Law Center; Gregory Lipper, Clinton Brook & Peed; Josh Blackman, President of the Harlan Institute; and Julie Silverbrook, Executive Director of The Constitutional Sources Project.

The competition was fierce, but Lucy Mini and Arjun Ahuja from Greenwich High School prevailed in the end and were named the champions of the Virtual Supreme Court Competition. 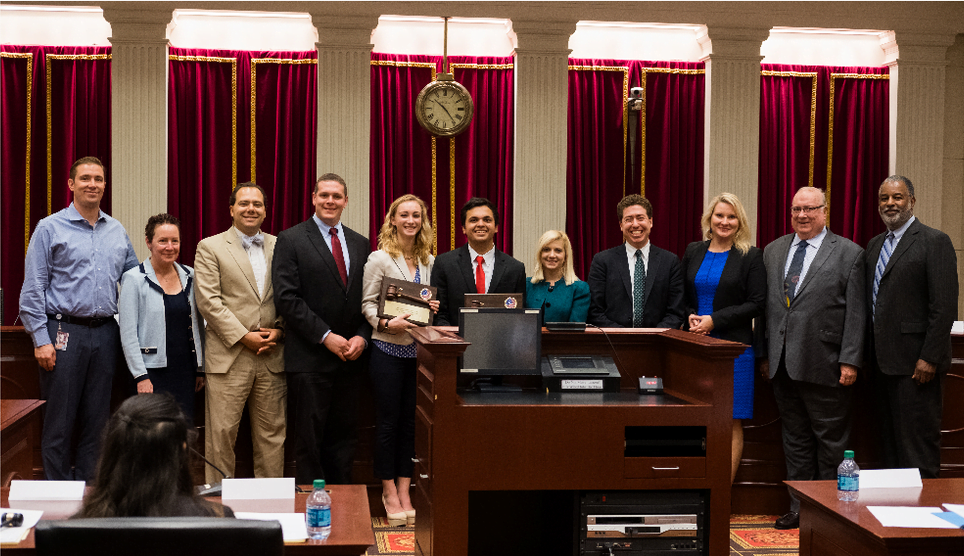 The Harlan Institute and the Constitutional Sources Project

Their coach, Aaron Hull, a model civic educator talked about how his students prepared for the competition.

“Lucy prepared for the competition in the middle of AP Exams, and Arjun had graduated, moved on to Senior Internship, and could have mailed it in,” Mr. Hull said. “Instead, both dug deep to develop Petitioners’ argument at a substantive and nuanced level, attempting, as we often strive to find in our Republic, a balance between the safety of all of our citizens and excessive governmental entanglement in the religious beliefs of a sect of them.”

Mrl Hull said that after arriving in DC, settling in, having dinner, and touring the monuments, Arjun and Lucy continued to work into the night to deepen their understanding of the facts of the case. “What a pair of citizen scholars,” he said.

“There are few time periods in US history where it would be more important to be constitutionally literate than right now. I find the law and the legal field to be interesting so it’s easy, but things like the Virtual Supreme Court keep the flame alive. I hope to continue with events like this to help advance the ideals that the Constitution represents.” – Greenwich High School senior, Arjun Ahuja

“The Constitution is no where near as black and white as it may seem in a traditional classroom setting,” said Greenwich High School junior, Lucy Mini. “Taking a stand on what those broad words mean, and then being battered by judges looking for any cracks in your argument, that is what the Founders intended when they wrote the Constitution, which is exactly what this competition provides for.”

“Constitutional education is so important and it’s heartening to see such a high level of constitutional facility from high schoolers,” said Ilya Shapiro, one of this year’s judges. “I would love to see this program become a standard part of social-science classes nationwide.”

“These students represent the very best of America,” said Julie Silverbrook, Executive Director of ConSource. “They are a testament to what can be achieved when thought leaders, public officials, schools, teachers, and parents invest in the civic education of our young people!”

“The top two teams were absolutely amazing. They fielded difficult and probing questions from a panel of nine judges with poise and sophistication. Watching these students’ impressive performance gives me faith for the future of the Republic,” said Harlan Institute President, Josh Blackman, reflecting Reflecting on how the competition has grown over the last five years.

“In less than five years, the Harlan Institute-ConSource Virtual Supreme Court grew from an idea Julie and I hatched to, what I hope, will remain as a venerable institution for many years to come.”

Coach Aaron Hull expressed his appreciation for the Virtual Supreme Court Competition: “What [The Harlan Institute and ConSource] have achieved has motivated my students by placing a rigorous, demanding, achievable, and open-ended goal in front of [them] that will propel them to find their excellence, within themselves. Thank you for motivating and inspiring- its the core of education more broadly, and the key to inspiring the civic engagement our Constitutional Republic so desperately needs. My students will pay it forward, I can assure you.”

Gerrit Koepping, who coached second place finalists Jacklin Chang and Emma Austin, and has participated in the Virtual Supreme Court Competition for three years, added “This competition provides students with meaningful insight into how the courts work and how our constitution is interpreted. It is hard not to be inspired by the work and dedication of these students.”