On Friday after school the GHS dance team squeezed in one more practice before state’s on Saturday in Hamden.

Friday also happened to be the team’s senior day. While last year 13 dancers were seniors, this year there are just three, and they were made to feel special by their younger team mates.

Delainey Sheehan, Tabitha Ireifej and Diana Finkel were surprised by the other girls on the team who brought in tutus, t shirts, crowns and wands, which they wore at school all day. The team also decorated the dance studio with pink balloons and streamers.

While it’s nice to blow of steam, and the girls were looking forward to a fun pajama themed dinner on the eve of the big competition, the tutus and crowns belie the seriousness of the team’s commitment.

Not only do the girls have practice after school three days a week for 90 minutes, the team has no season per se.

In addition to their own competitions, the girls perform at the homecoming pep rally, football games, basketball games and even the occasional soccer game.

And, for the captains, the work doesn’t start on the first day of school. Tabitha, Delainey and Ellie worked all last summer choreographing dances.

In fact, they choreograph all the team’s routines, which is quite a feat. One hop hop dance took about two months to complete.

“Other teams hire coaches and professionals with years of experience to do their choreography,” Ellie said.

Expectations are high, and coach Kathy Steiner said all the girls are good students first.

“We suggest girls continue to dance beyond this team,” said  Tabitha who took up dancing when she was 9, adding that girls on the dance team often take classes at Allegra or Greenwich Dance Studio.

The team will compete on Saturday in the hip hop and jazz categories. (They don’t compete in the categories of kick or palm, which is a mix of cheerleading and dance.)

“A couple weeks ago at a competition at Fairfield Warde High School we got the judge’s award for jazz,” Delainey said. “It was an acknowledgment of how synchronized we were for such a big group.”

This year the captains have collaborated with the cheerleaders and danced together in a routine that wove in flips and handsprings. “It brings more excitement to the game,” Delainey said. “We included dancing, stunting and jumps.”

The past several weeks the two senior captains Tabitha and Delainey are also sharing their talents with seniors in SRO. Without giving too much away, they said they’re teaching the boys a dance to Justin Bieber. The couple’s dance is set to “You’re the One That I Want” from Grease, and the girls’ dance is Beyoncé’s “Run the World.”

“SRO’s been great. We get to spend time with friends we don’t see that often during the day, and even meet new people,” Delainey said. 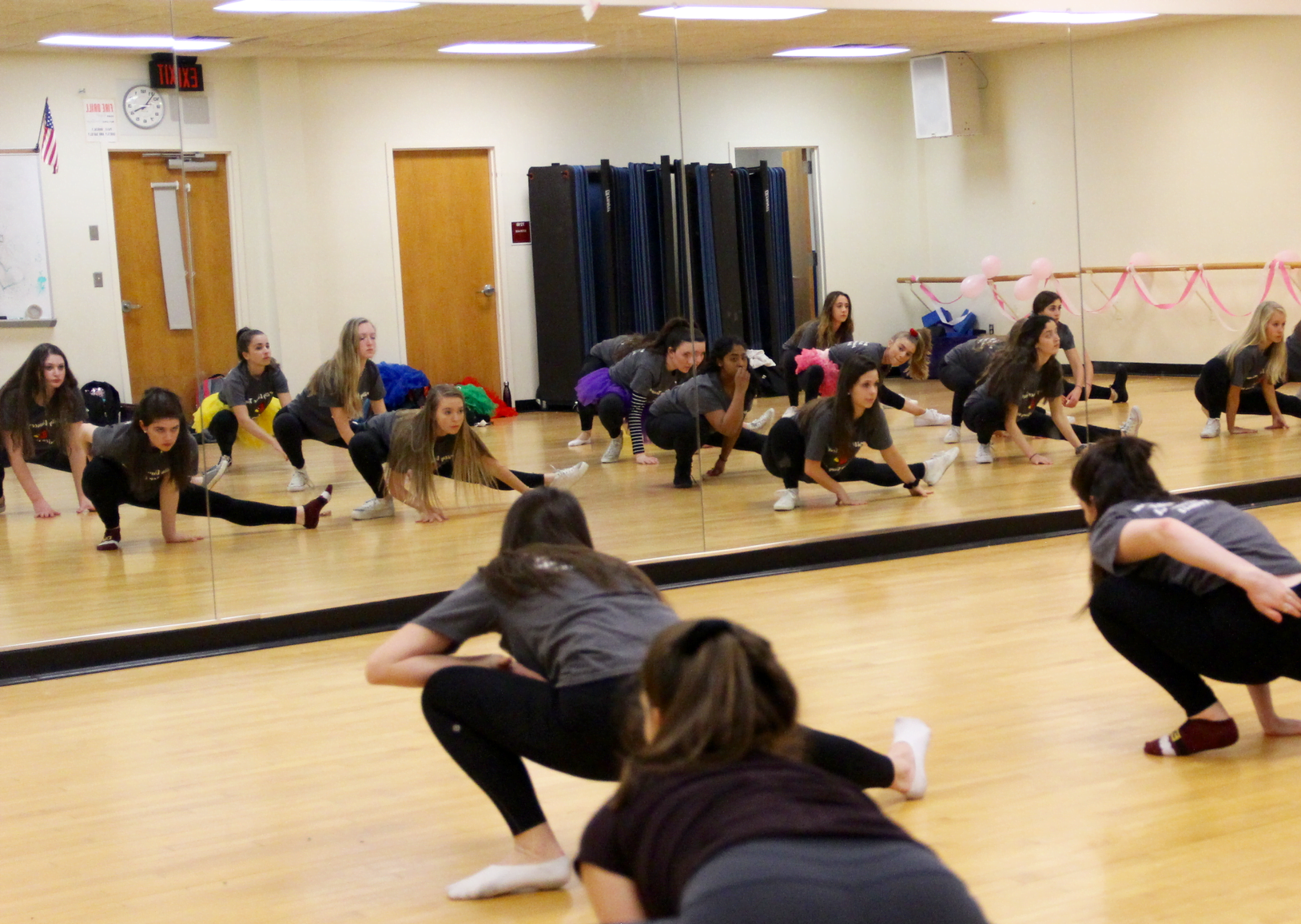 The GHS dance team warms up in the dance studio at GHS on Feb 23, 2018 Photo: Leslie Yager

Coach Steiner, who said the team was started about 25 years ago, said over the years expectations have increased.

“There is more skill, more technique, and a higher quality of the dance choreography. The girls respect each other and the athletic department sees the dance team as a varsity team,” she said. 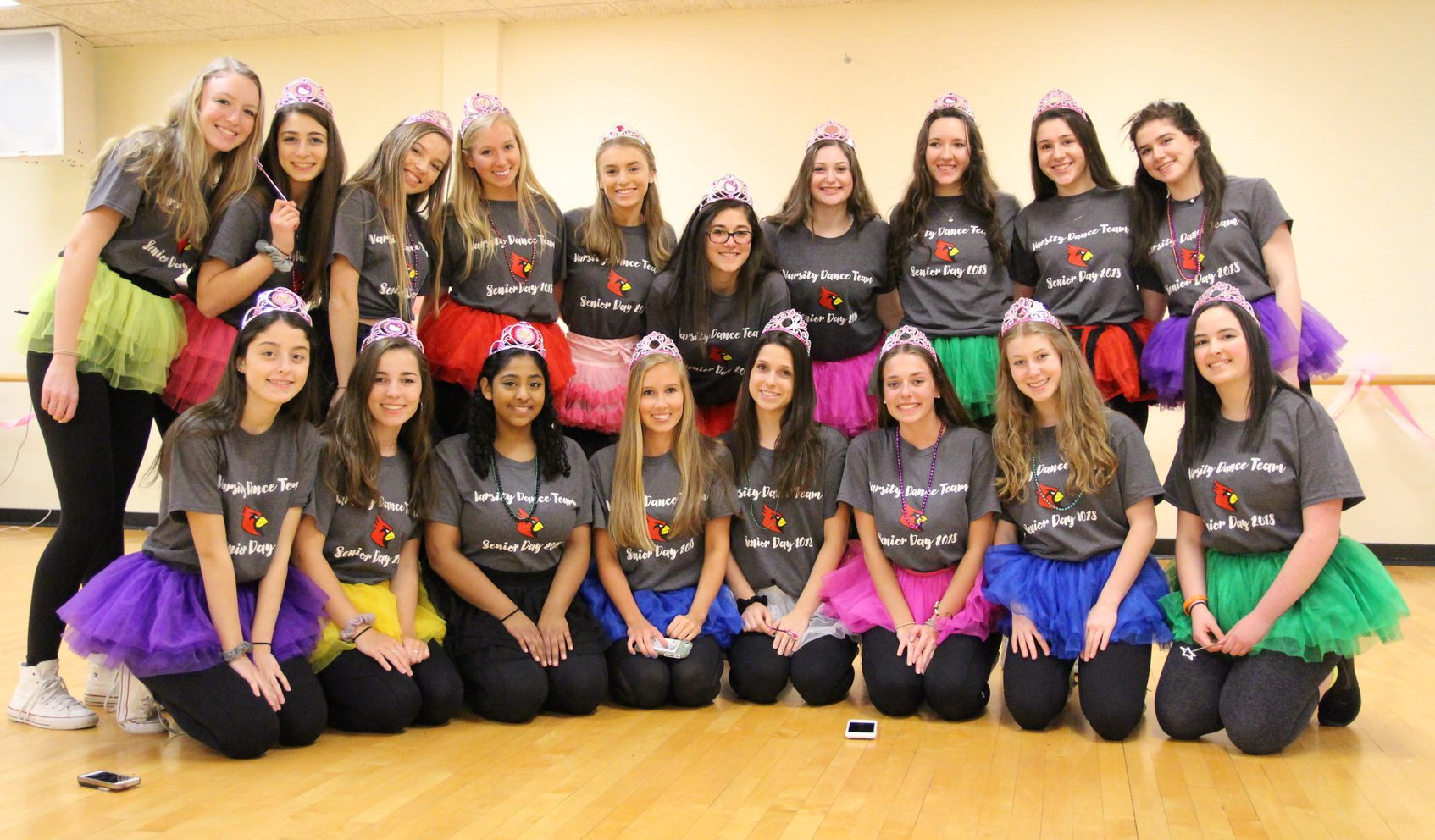