At Greenwich High School the Girls Dance Team is on a tear. Robin Bologna, who is in her second year as captain, and co-captains Sarah Bueller and Bianca Cardini took time from their rehearsal schedule to talk about dance team.

At a recent competition at Woodland Regional High School, the team placed third in the varsity jazz category.

The win came as a surprise for the team.

Not only did the girls do their own choreography while other teams hire professionals, but the GHS girls are mostly known in Greenwich for their half-time hip-hop routines.

“It was the ‘Dancing in the Woods’ category and there were eight teams,” Bianca explained. “We didn’t have our hip hop dance ready yet, but we had spent a lot of time to make the jazz dance competition-ready.”

The girls have another competition coming up in two weeks at Fairfield Warde where they’ll dance compete in both jazz and hip-hop. Then it’s on to State’s in Hamden.

The captains said their jazz dance came to life last summer, when they choreographed the routine in their limited free time. During the school year time is even more limited.

“We don’t have practice on Monday or Thursday, so we’d go to Robin’s to choreograph. Also during finals and mid terms,” Sarah said. “It’s a lot to get done.”

“It was hard because the three of us were in my small basement,” Robin explained.

“We didn’t know what it would look like with the whole team dancing,” Sarah said of the jazz routine, which is to the song Feel Again by OneRepublic. More recently the girls have perfected their hip-hop routine.

The dance team mainly performs at boys football and basketball games, though the disruption caused by the leak in the gymnasium has moved games to other venues. Unfortunately, since the dance team are not provided buses, they haven’t been able to perform at the boys basketball games.

That said, on Thursday night, the dance team will perform their winning jazz routine at half time during the girls basketball game which will be played at Brunswick School.

“No one here has seen our jazz routine yet,” Robin said.

“A lot of people think, ‘Oh we love the dance team. They can move,'” Sarah said. “Jazz dancing involves more skill than hip-hop.”

All three girls come to the dance team from different middle schools and dance backgrounds.

Robin has been dancing at Allegra Dance Greenwich since she was three, taking a variety of classes. In addition to dance team, she currently spends on average 8 hours taking ballet, pointe, jazz & tap classes. She teaches tap class to young dancers at Allegra and has studied during the summer at Joffrey Ballet and Broadway Dance Center both in New York City.

Sarah started at St. Saviour’s School of Dance in Old Greenwich when she was five, taking basic ballet and tap class, and was in the competition class for five years.

Bianca also started dancing at three. She became a passionate dancer when she started taking classes at Greenwich Dance Studio. In fact, all three captains continue to take classes in addition to their dance team commitment.

The dance team has two upcoming competitions at end of the month. They will travel to Fairfield Warde and State’s last weekend of Feb in Hamden.

A unique feature of dance team is that it is both a Varsity sport and a club.

Unlike the cheerleaders, who have a second tryout for winter sports season, the dance team’s roster is the same for two seasons.

“We start in September and go to March,” Sarah said. “Once fall ends we don’t have a second try out. The team stays the same.”

The captains said their unique status as a club affords some opportunities a sports teams don’t have. Because they’re not sanctioned by CIAC – they can schedule some of their rehearsals at Allegra Dance Greenwich.

Also, because of their club status they can do activities teams can’t always do under the umbrella of GHS Athletics. 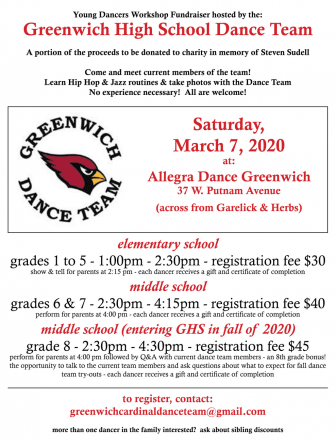 On March 7, 2020 at Allegra Dance Greenwich, 37 West Putnam Ave, the dance team will hold a “Young Dancers Workshop” where elementary school, middle school grades 6&7, and grade 8 will learn hip hop and jazz routines and take photos with the dance team. No experience is necessary.

For some it will be their first dance experience. For eighth graders it’s a chance to meet GHS dance team members and learn about the team.