On Wednesday at Greenwich High School not only did the inaugural Innovation Lab class have a chance to show off their new digs and share their stories with parents, press, teachers and administrators, but all six recipients of Greenwich Alliance for Education grants had the opportunity to talk about their work and express their gratitude. The Alliance has given a total of $97,070 in “Reaching Out Grants.”

One of the six grant recipients was the Innovation Lab at GHS, and a highlight of the event on Wednesday was getting to hear from the students in the program, who talked about how much they are learning and enjoying the process. 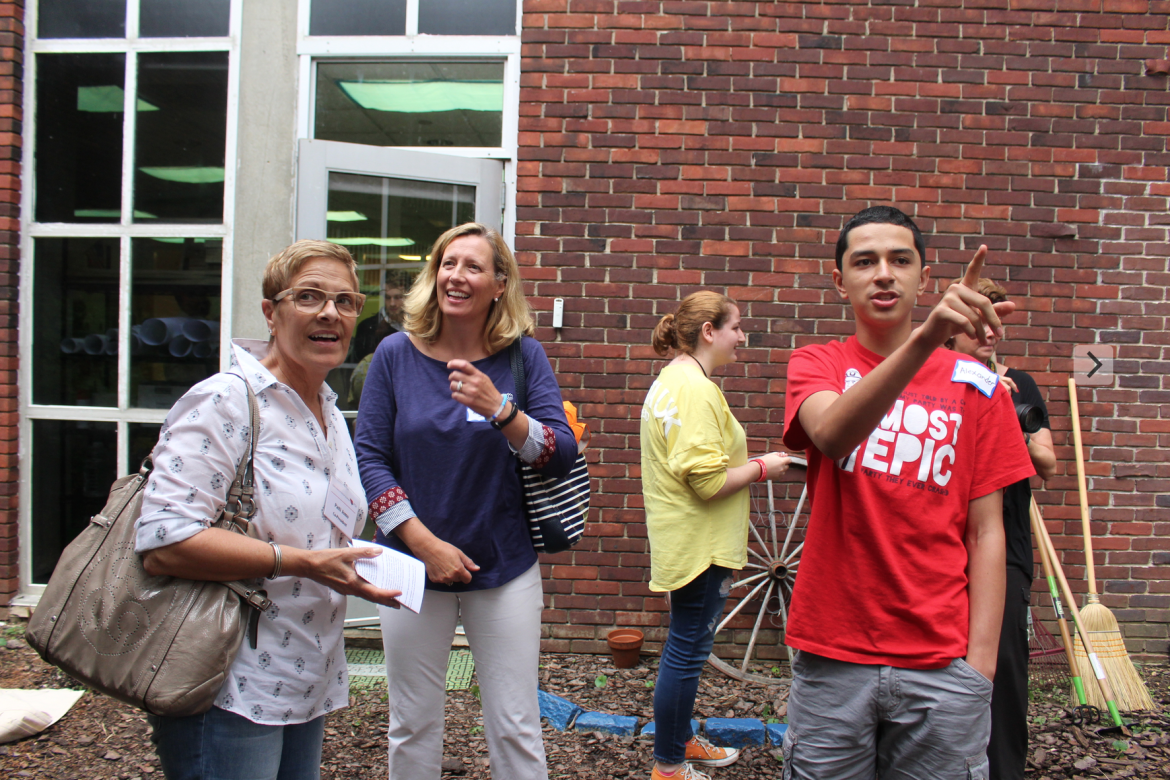 Alexander shows GHS PTA co-presidents Cricket Dyment & Patti Jomo work that the InnovationLab students have done in what was previously neglected courtyard. The courtyard is adjacent to the glass corridor and student center. Access is via the STEM classroom the Inn Lab students use every day. Credit: Leslie Yager

“At Innovation Lab you have no excuse not to know something because you are doing a project. It’s more for the sake of learning. I love learning now, more than I did before and Innovation Lab has really helped shape that,” said Kathryn.

“I’m not that great at regurgitation,” said Alexander. “I’m more of a hands-on person, so this is a much better environment for me.”

“We get to work in groups and then go to a teacher for help. Last year, sitting down and being told what to learn and memorize, I was always confused, and not knowing what was confusing me,” Molly said. “But, working in a group, if we’re all stumped, we hone in on one problem, and that’s when to ask the teacher for help.” 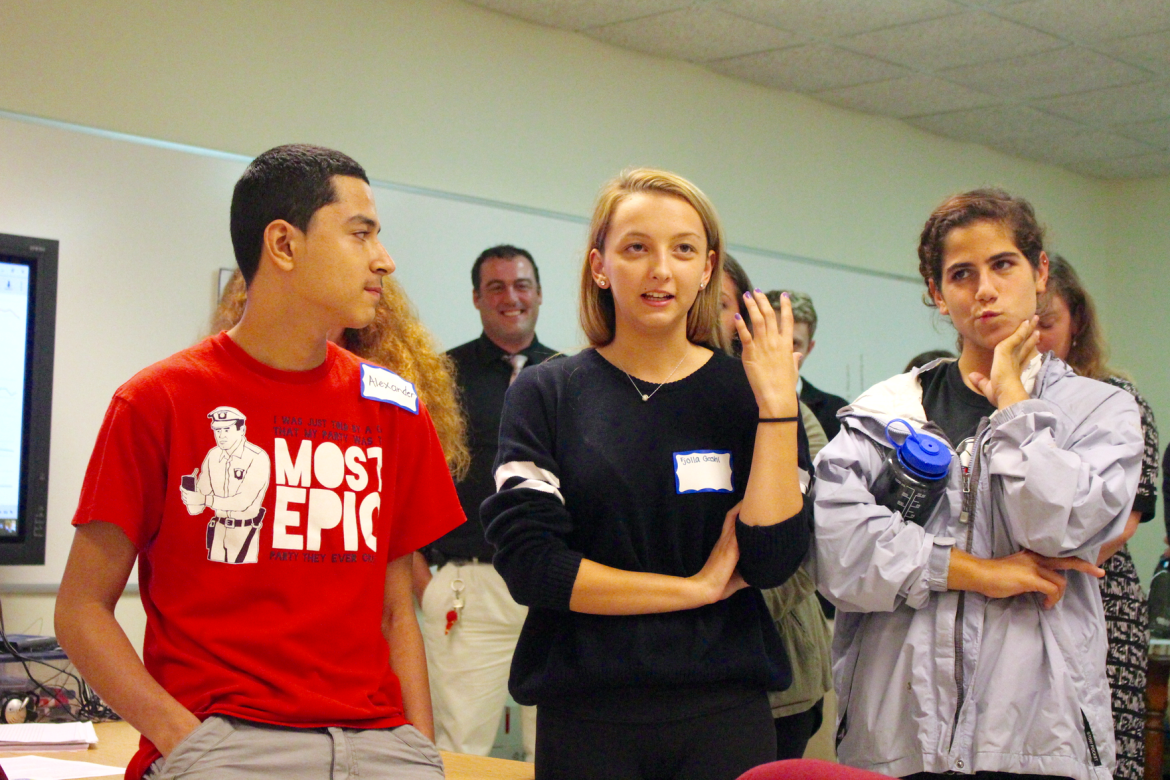 The Innovation Lab students spoke off the cuff about their experiences so far during the Alliance reception to celebrate $97K of grants for projects in Greenwich Schools. Credit: Leslie Yager

The students said the transition from traditional class instruction, to more independent learning took just a few days. “In life no one is really telling you what to do. You have to make decisions for yourself. That’s really important,” said Kathryn.

Julie Faryniarz, executive director of the Alliance, introduced teachers and administrators who each spoke about the grant projects they’re involved with.

Reaching Out Grants included AVID at Western Middle School. Tom Healy, an Assistant principal at Western, the AVID administrator at WMS, said though AVID is not new to the district, it is new to WMS, where 12 teachers over two years have gone through the summer institute. We have had school wide training and our first AVID elective class of 19 7th graders. “It has been such a huge success and such a point of pride for all of us,” Mr Healy said. “We can’t thank the Alliance enough for the support.” 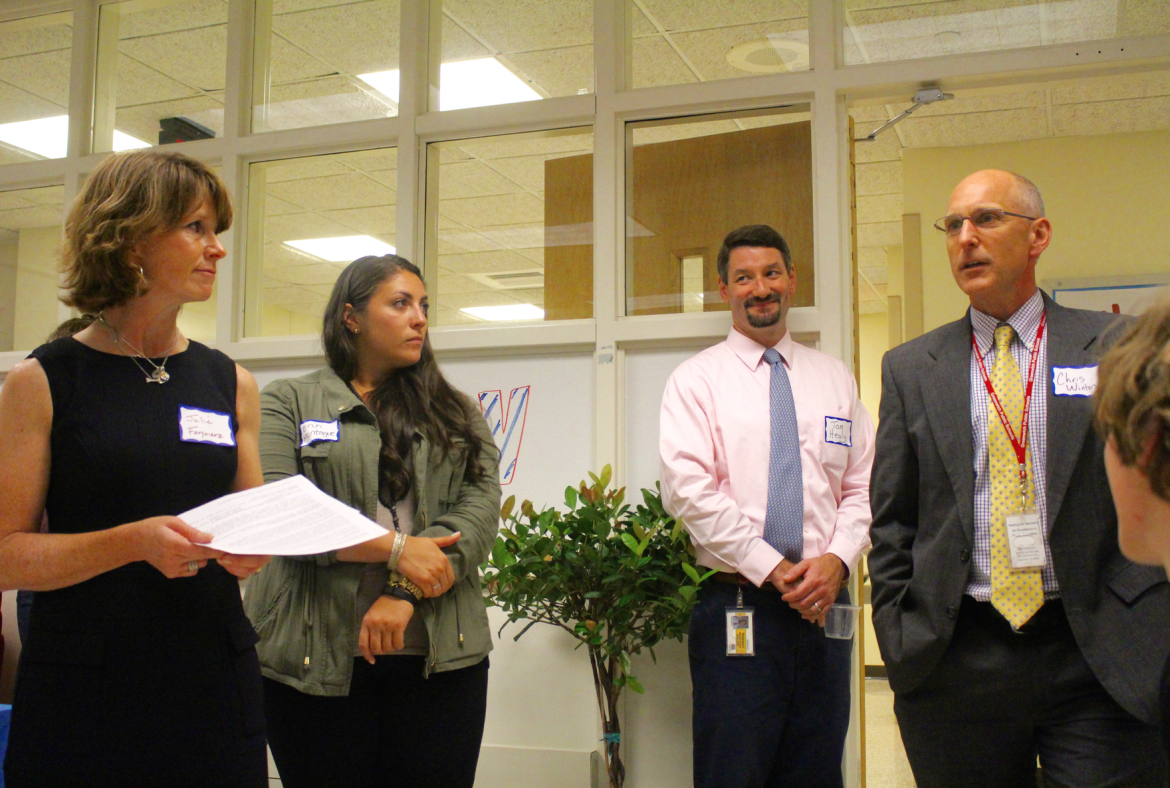 Mr. Healy said the 19 elective students were “voluntold” to come to Open House where they served as student ambassadors and answered questions from parents. “Not only was it wonderful for their parents and their peers to see them in that leadership role, but they were so excited and they felt extraordinarily empowered by that experience.”

Odyssey of the Mind, which also received a grant, provides a chance for six teams at four Greenwich Schools to come up with creative problem solving opportunities that range from mechanical devices to presenting their own interpretation of literary classics.  The international program, which involves competition on local, state and world levels, is in JC, Parkway, Cos Cob and Riverside Schools. 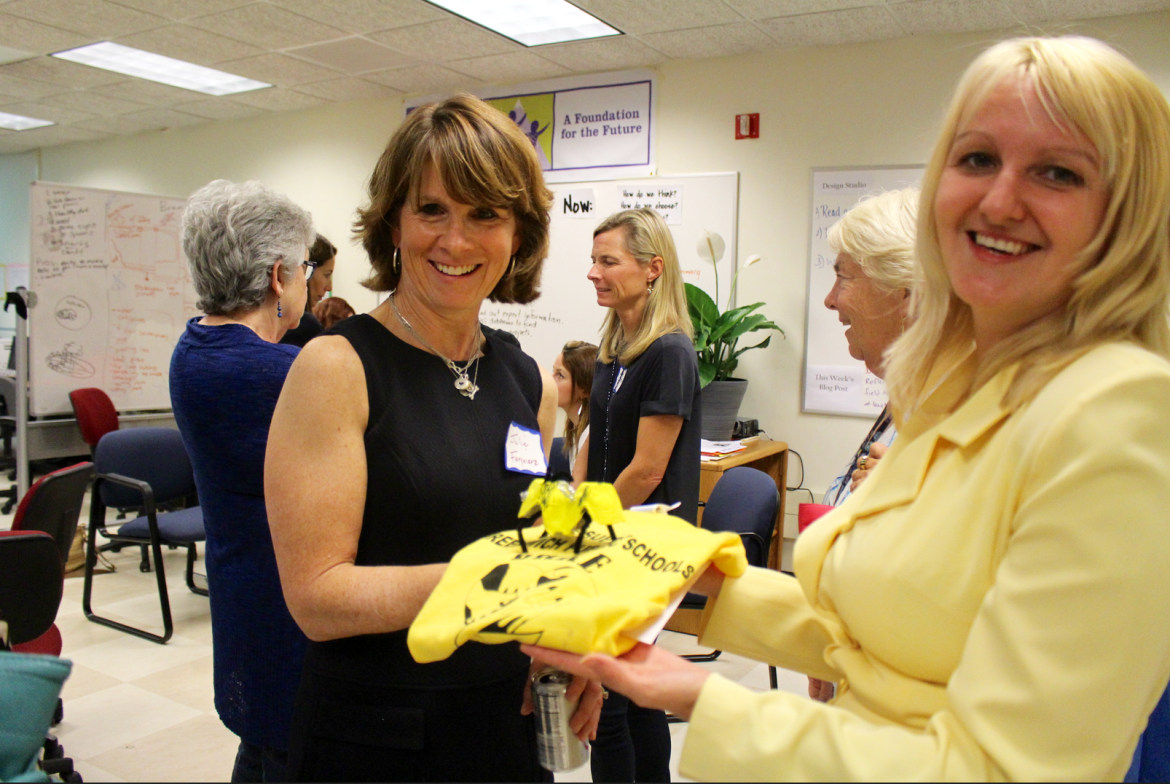 Julie Faryniarz from the Alliance with Alina Boie who is a psychologists with the district. The two are holding Dare 2 Care t-shirt and “bee.” Credit: Leslie Yager

The Dare 2 Care initiative, another grant recipient, allows for several events to be planned including this week’s Log Off and Listen Day. The grant will also make possible a series of workshops in elementary and middle schools in Greenwich, conducted by mental health professionals with assistance from Greenwich Alternative High School Students. 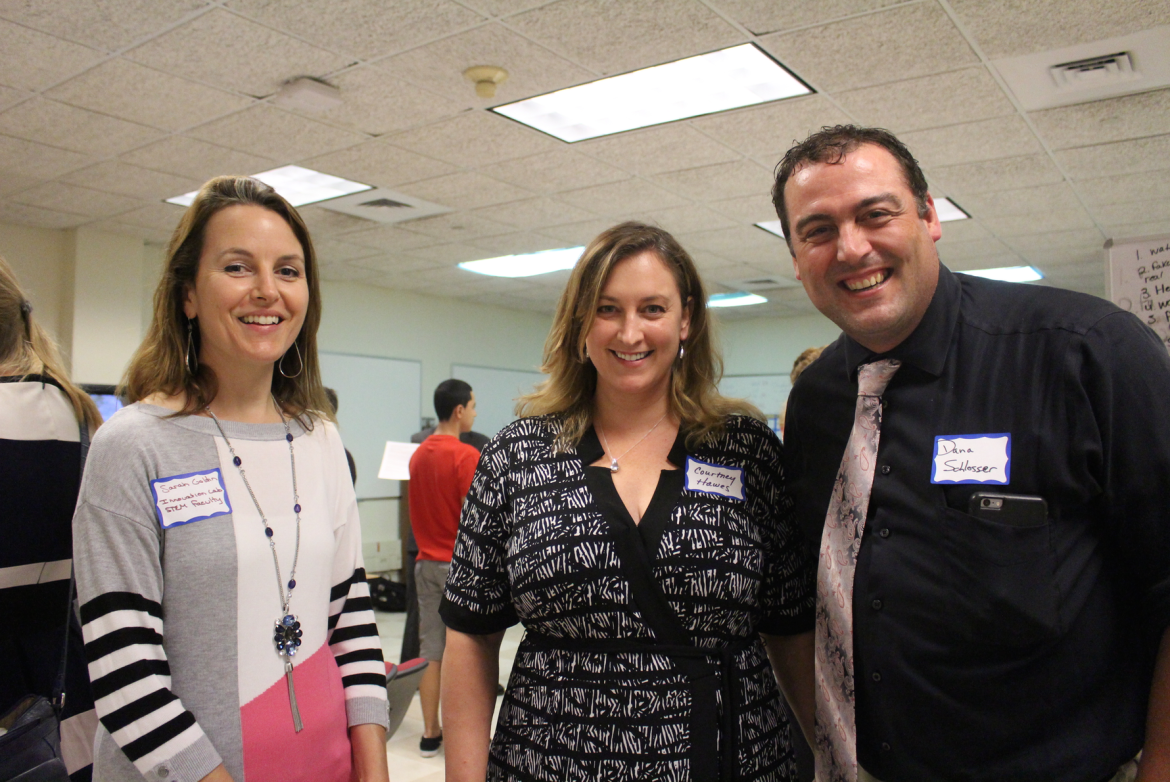 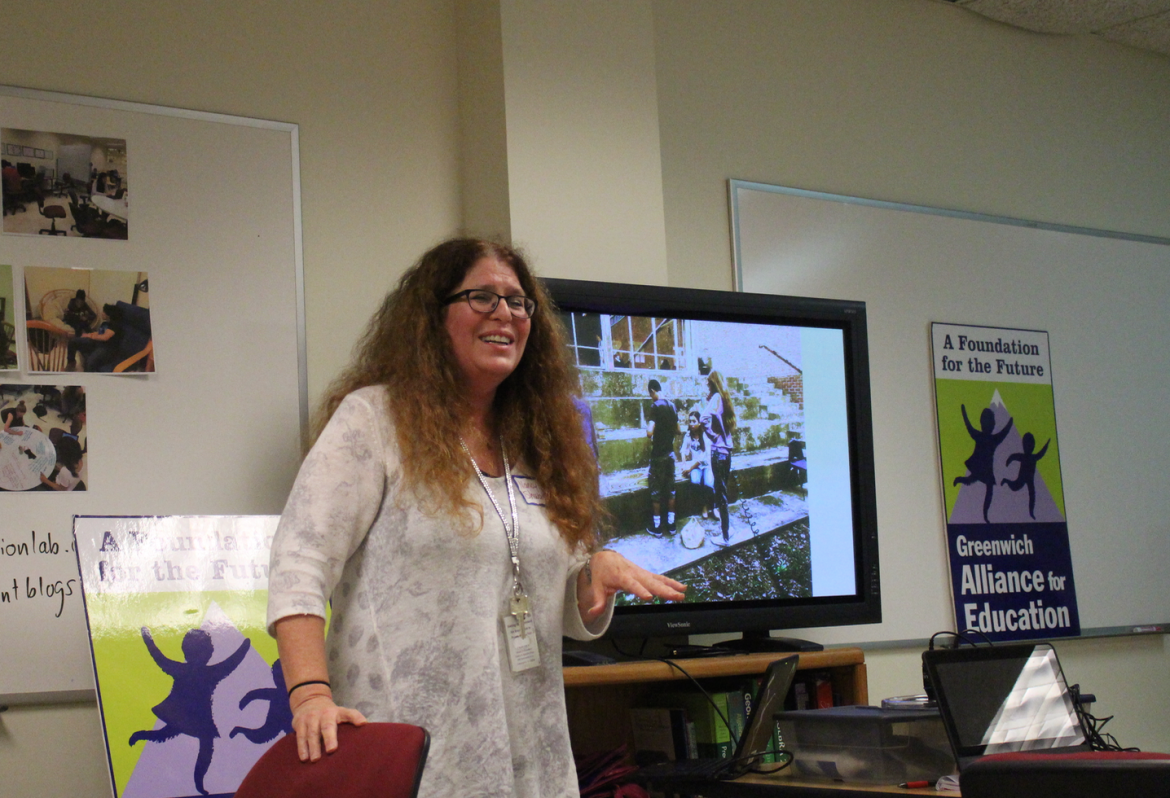 Nancy Shwartz from Cos Cob School at the Alliance reception. Credit: Leslie Yager

Nancy Shwartz from Cos Cob School, spoke about Learning Commons which has been renamed “Innovation Space” in anticipation of collaborations with Innovation Lab. The Innovation Space at Cos Cob School, made possible by a grant front the Alliance. “What we have now is a space for all the students to think creatively Our new slogan is Creation without Fear is our new slogan,” she said. “We want all students have the opportunity to create and fail. And it’s okay to fail because that’s how we learn.”

Cos Cob School Says Farewell to Its Media Center 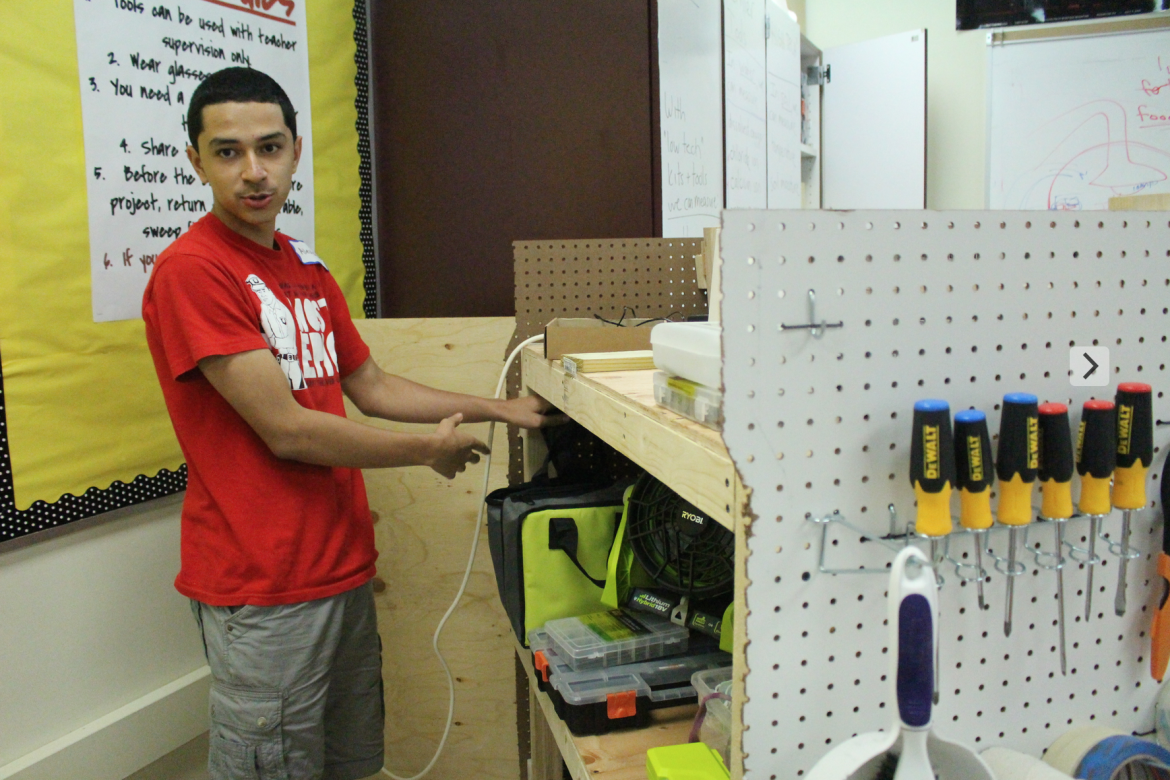 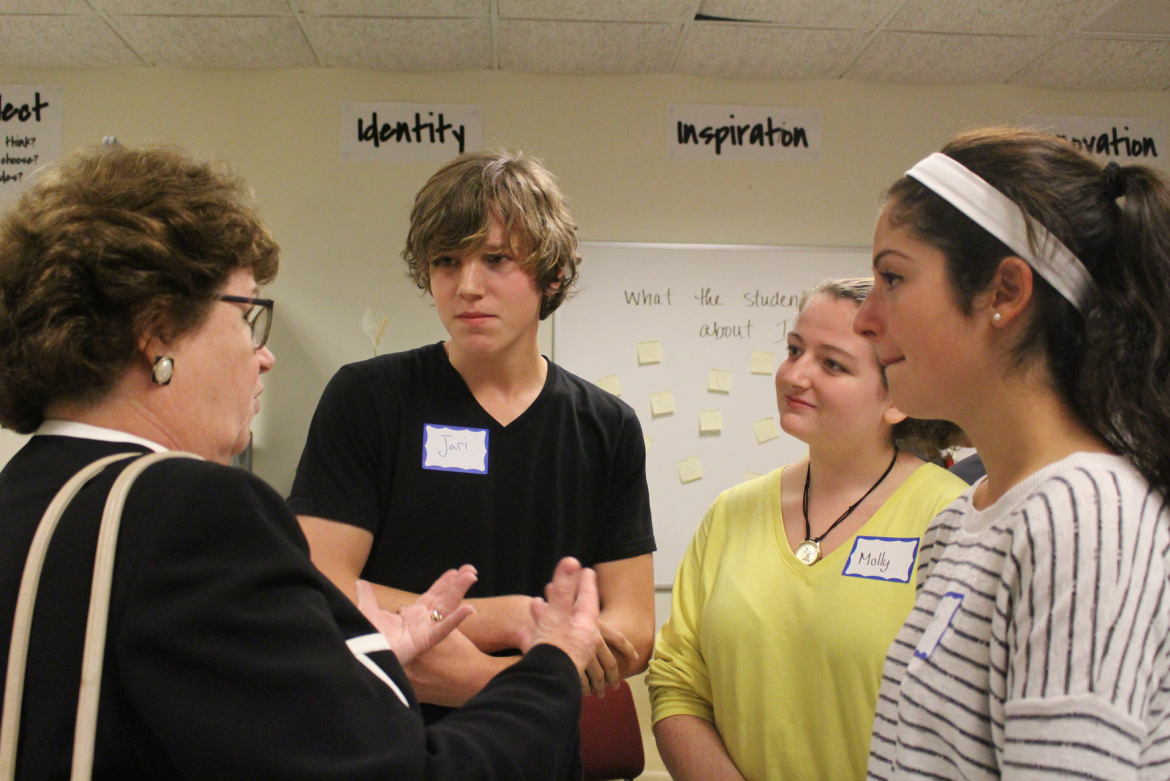 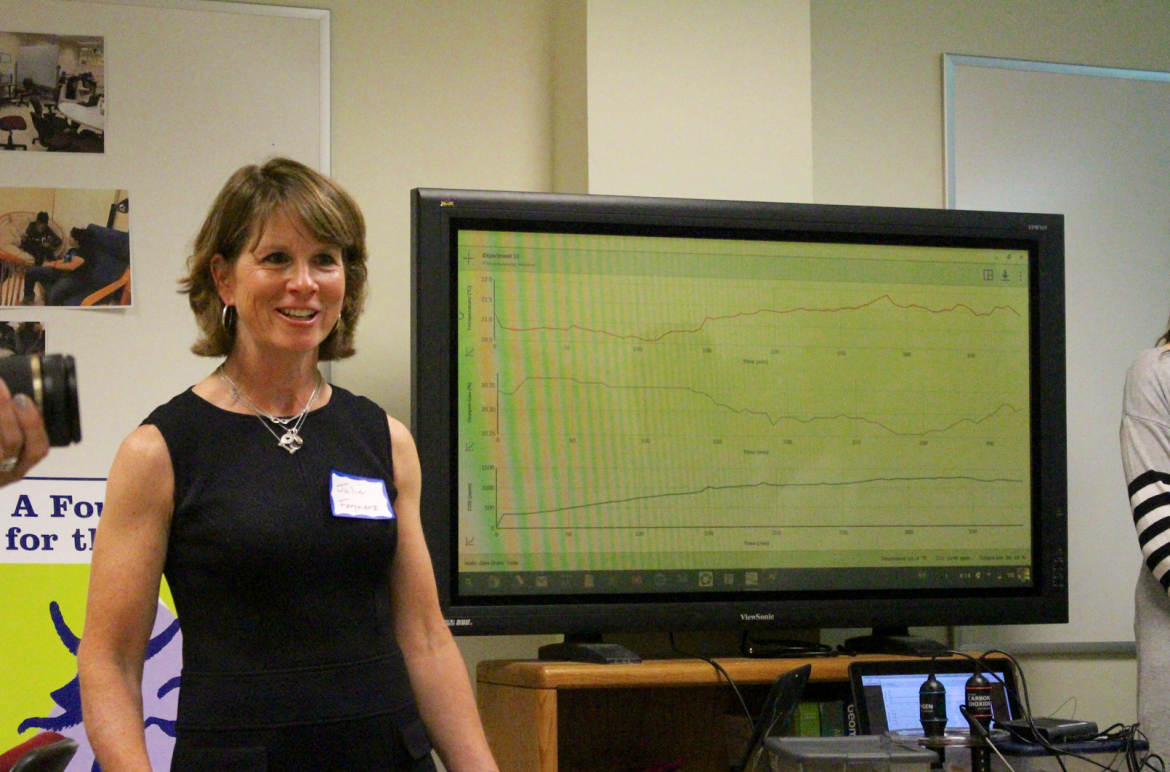 Julie Faryniarz of Greenwich Alliance at the reception held in the Innovation Lab at GHS on Sept. 30, 2015. Credit: Leslie Yager 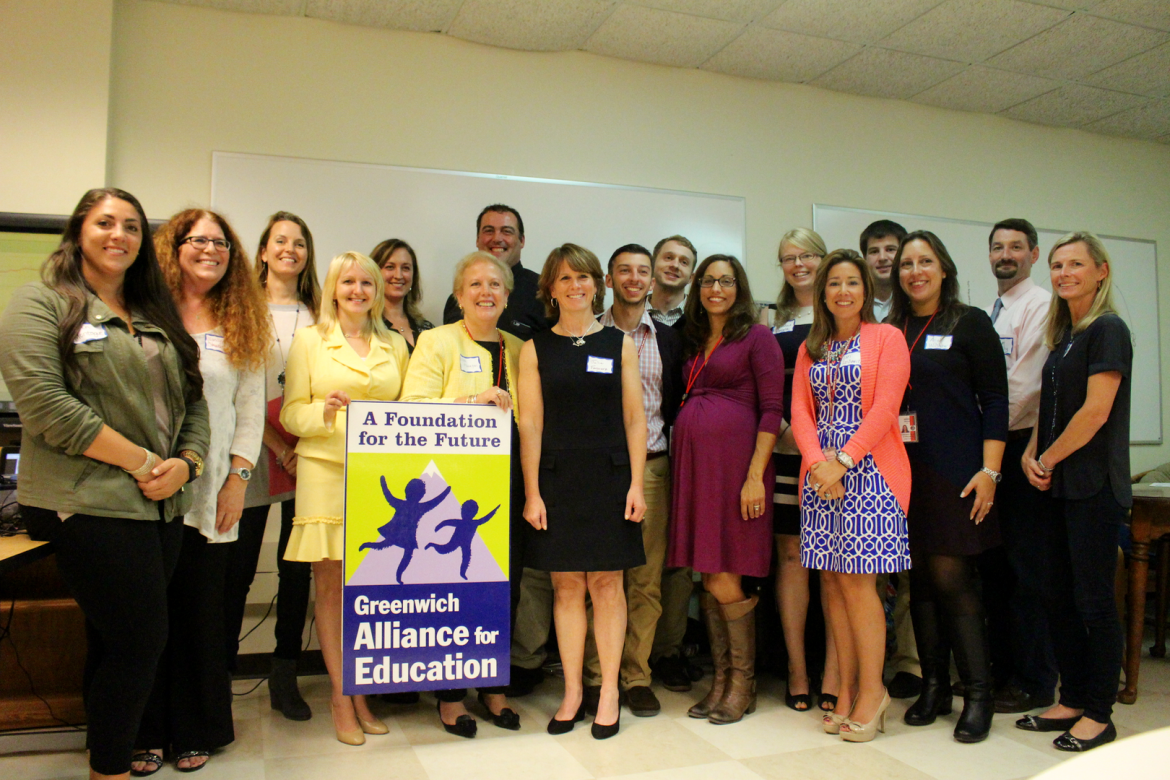 Group photo of all the Reaching Out Grant recipients during a reception in the Innovation Lab on Wednesday. A total of $97,070 grants went to six projects in Greenwich Schools. Credit: Leslie Yager 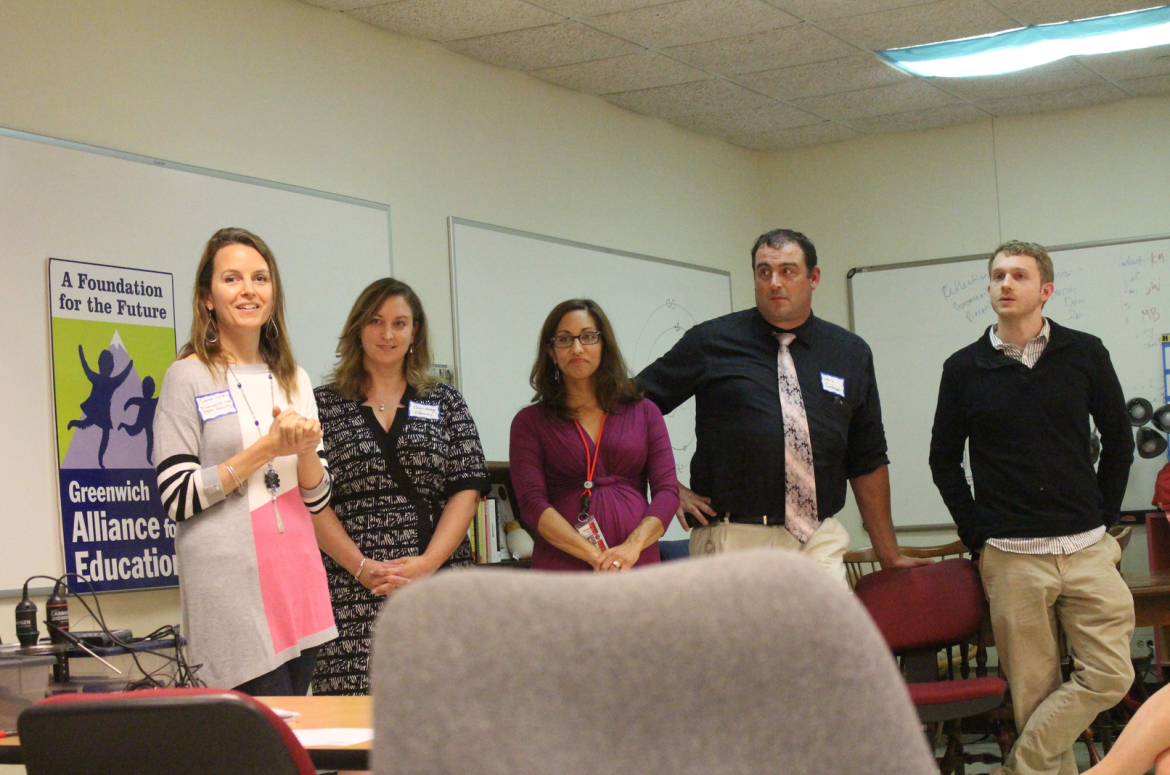 Some of the GHS Innovation Lab team at the reception in honor of Greenwich Alliance’s distribution of “Reaching Out Grants.” Credit: Leslie Yager 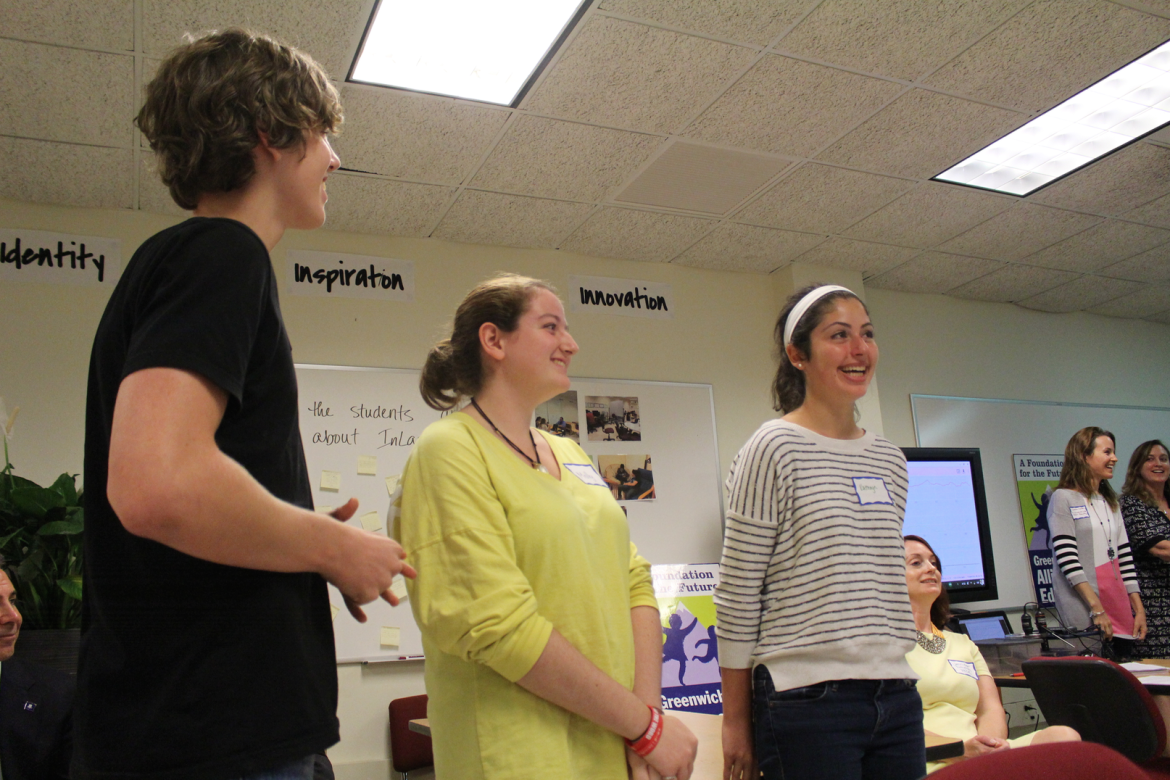 Jari, Molly and Kathryn each spoke about their experiences so far in Innovation Lab at GHS. Credit: Leslie Yager 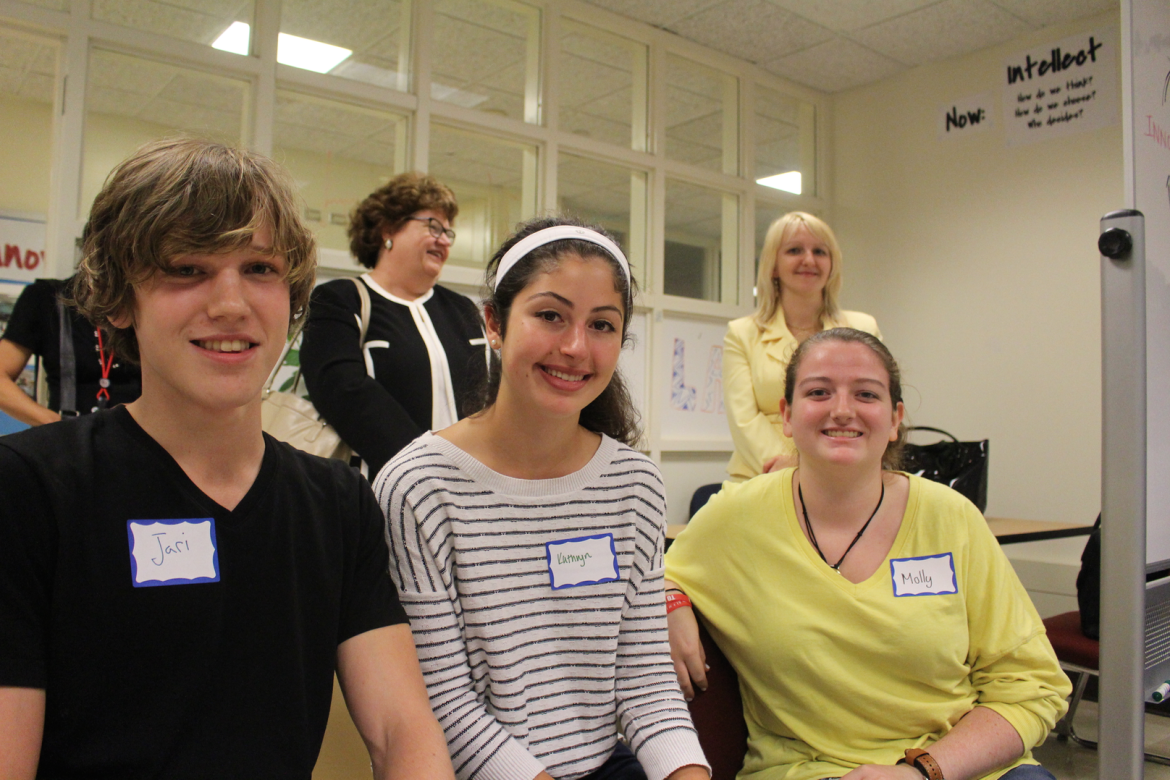