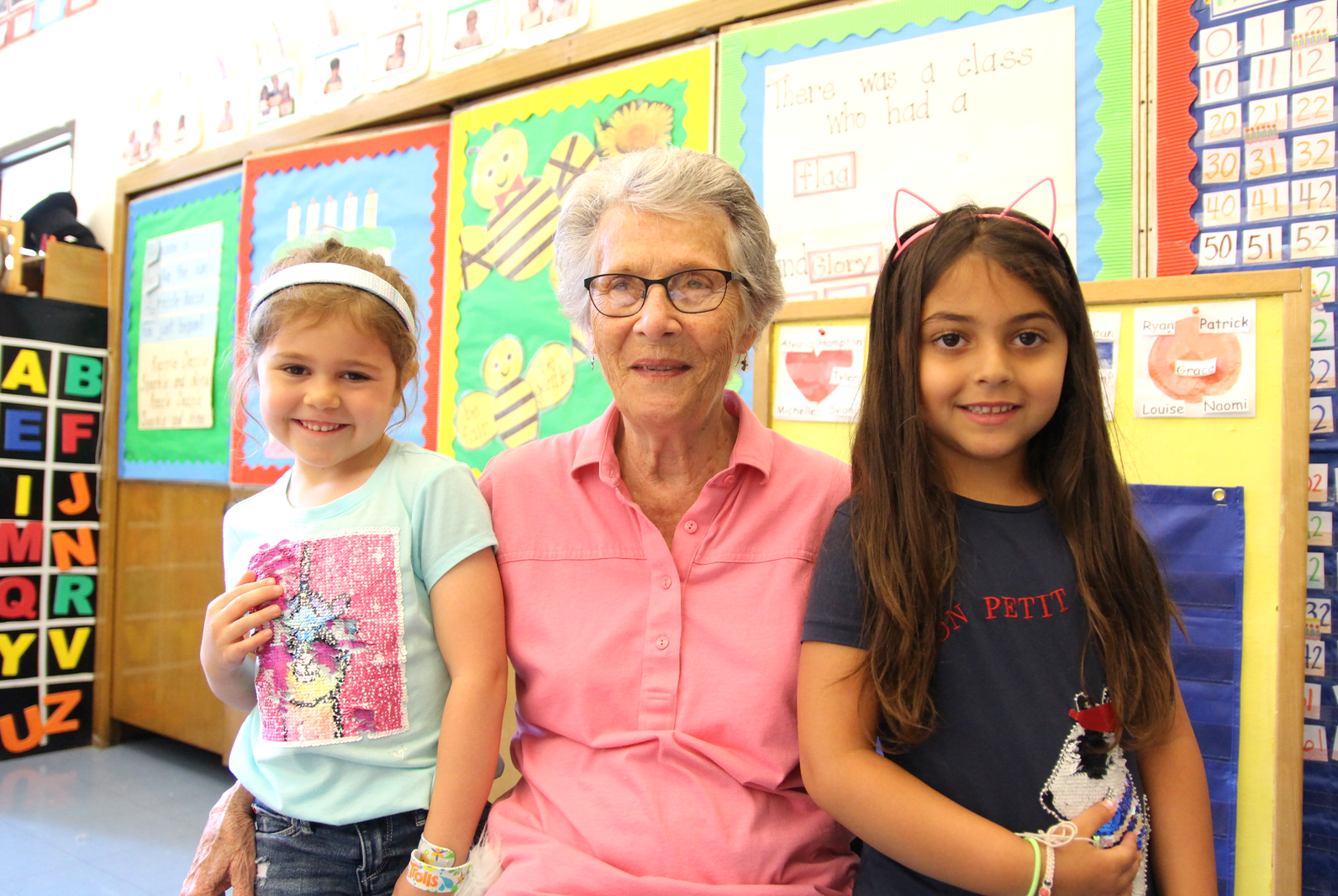 Grace and Lilian with Mrs. Littlefield in their kindergarten class at Old Greenwich School. May 30, 2018 Photo: Leslie Yager

It was one of those “It’s a small world” moments that make you shake your head.

Louise Williamson’s husband Joe was at his 40th Greenwich High School reunion in 2016 when he connected with Bart Littlefield. The two had grown up near each other in Riverside, attending Riverside School, Eastern Junior High School and GHS.

Bart said his mother taught in the classroom No. 2, which had a pretty bay window, and Joe said that was exactly where his wife has been teaching since 1990.

Louise Williamson started teaching in Stamford, then went to GCDS for a year before being hired at North Street School – the year kindergarten became full day.

She said when she heard room No. 2 was going to be open at Old Greenwich School, she asked if she could transfer, and has been teaching in that room ever since.

“I thought Bobby might enjoy a visit,” Mrs. Williamson recalled. “And then she came to read a book to the children, and one thing lead to another.” 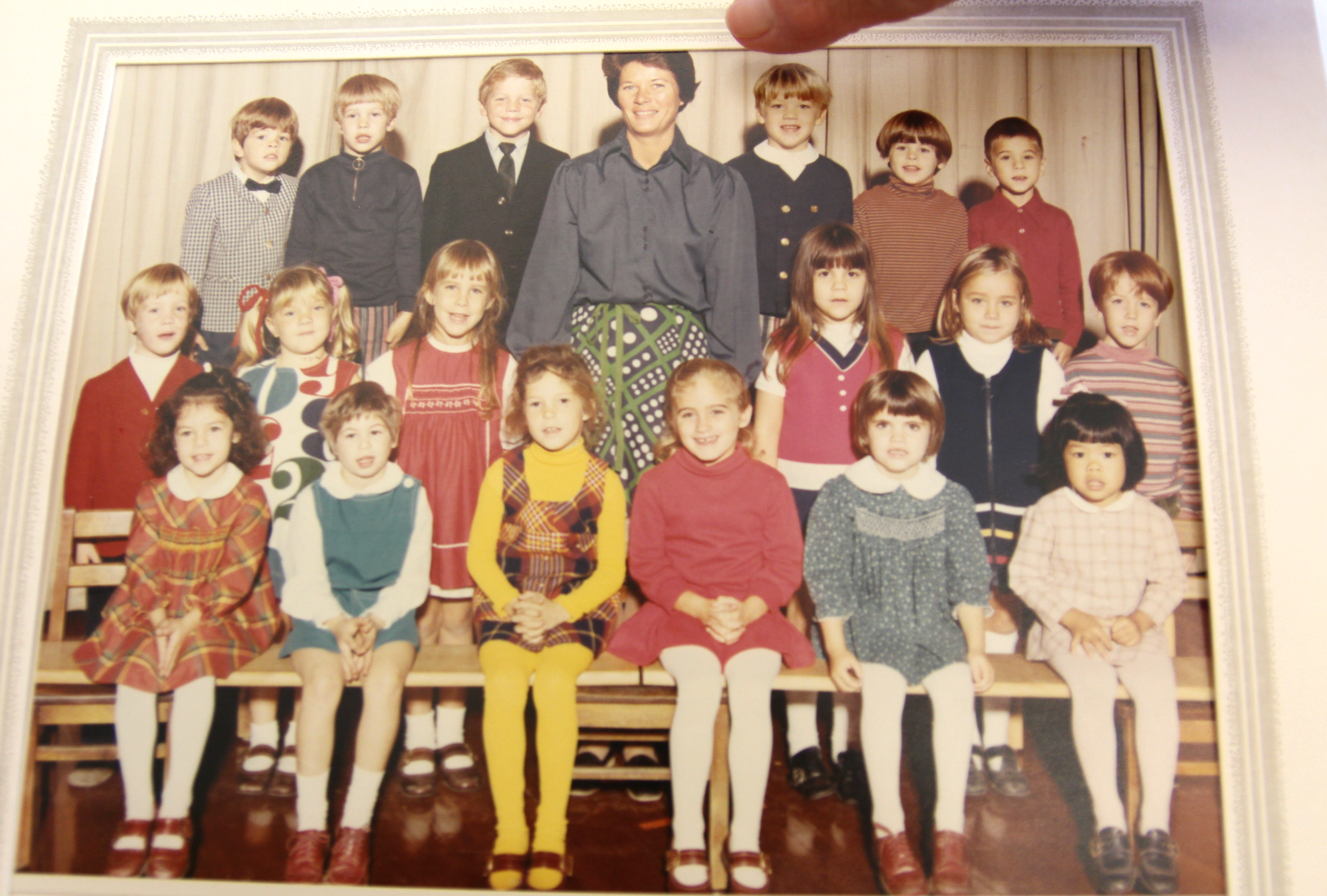 A class photo from the 1970s when Sue Harvey (formerly Sue Dippy), a current an instructional coach at Old Greenwich School, was a kindergarten student of Bobby Littlefield.

Now Mrs. Littlefield works with the children in her former classroom twice a week.

“When I put out the chair for Mrs. Littlefield, they get very excited,” Mrs. Williamson said. “They wait for the knock on the window. Then they run to her.”

On Wednesday, the children had a lesson on opinions. They were tasked with sharing their opinion of Mrs. Littlefield. 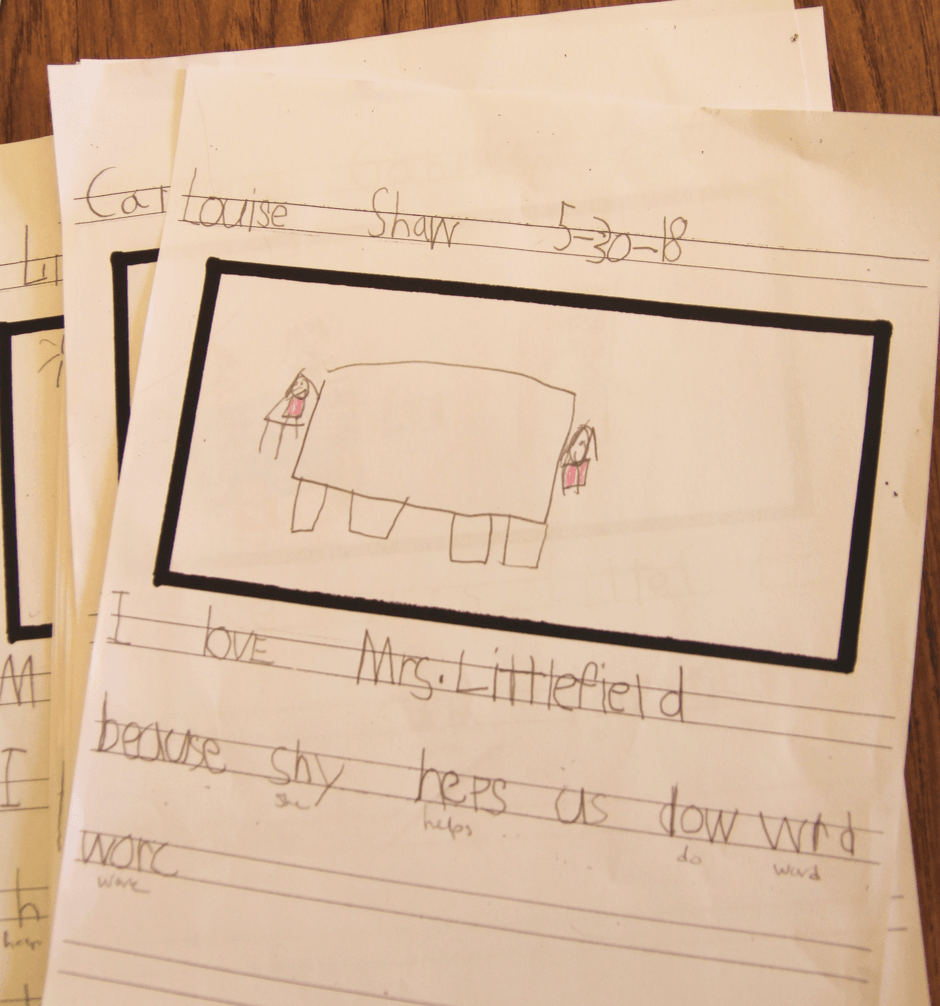 On Wednesday, the children had a lesson what it means to have an opinion. They were tasked with sharing their opinion of Mrs. Littlefield. May 30, 2018 Photo: Leslie Yager

Mrs. Littlefield couldn’t recall the year she began teaching, but that she wanted to work part-time teaching kindergarten when it was a half day and students went home in time for lunch.

“The room has so much more in it today,” she observed on Wednesday. “There are all these plants, and tables with groups of children. When this was my classroom there were small desks. My desk was here,” she said, gesturing to the back of the room. And there was a piano.”

Mrs. Littlefield recalled three boys whose daily barrage of expletives were a challenge. When the boys resisted her requests to clean up their language, she came up with a novel idea involving the tiniest dab of soap.

The idea worked, but she was concerned that the principal, Bill Wright, whose name is forever memorialized on the tiles in the school entrance, might fire her.

As soon as the class dismissed she ran to Mr. Wright’s office and told him of her tactic. Waiting with bated breath, she was relieved when he shook her hand and said, ‘I thank you. His parents will thank you.’

When she returned to her classroom, indeed one of the boys’ mothers was waiting in the doorway. “She thanked me,” Littlefield recalled with a wry smile.

“Kids are kids,” she said. “Some are studious. Some are not. They have their ups and downs like we do.”

Littlefield said she loved every minute of teaching. “Well, almost every minute,” she corrected herself. 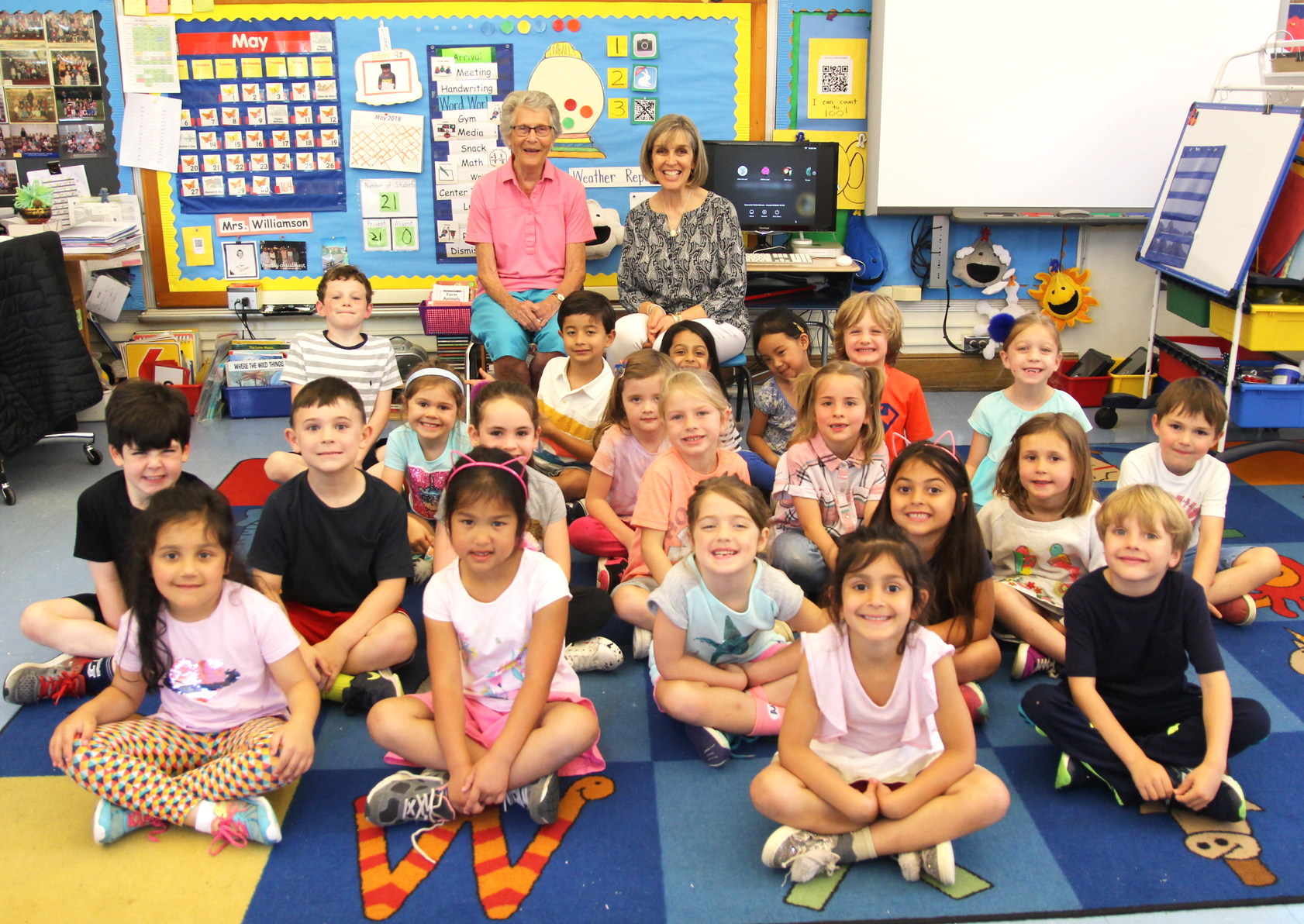 Louise Williamson’s kindergarten class at Old Greenwich School in Room No. 2, where Bobby Littlefield taught kindergarten when it was just a half day and children went home in time for lunch. May 30, 2018 Photo: Leslie Yager 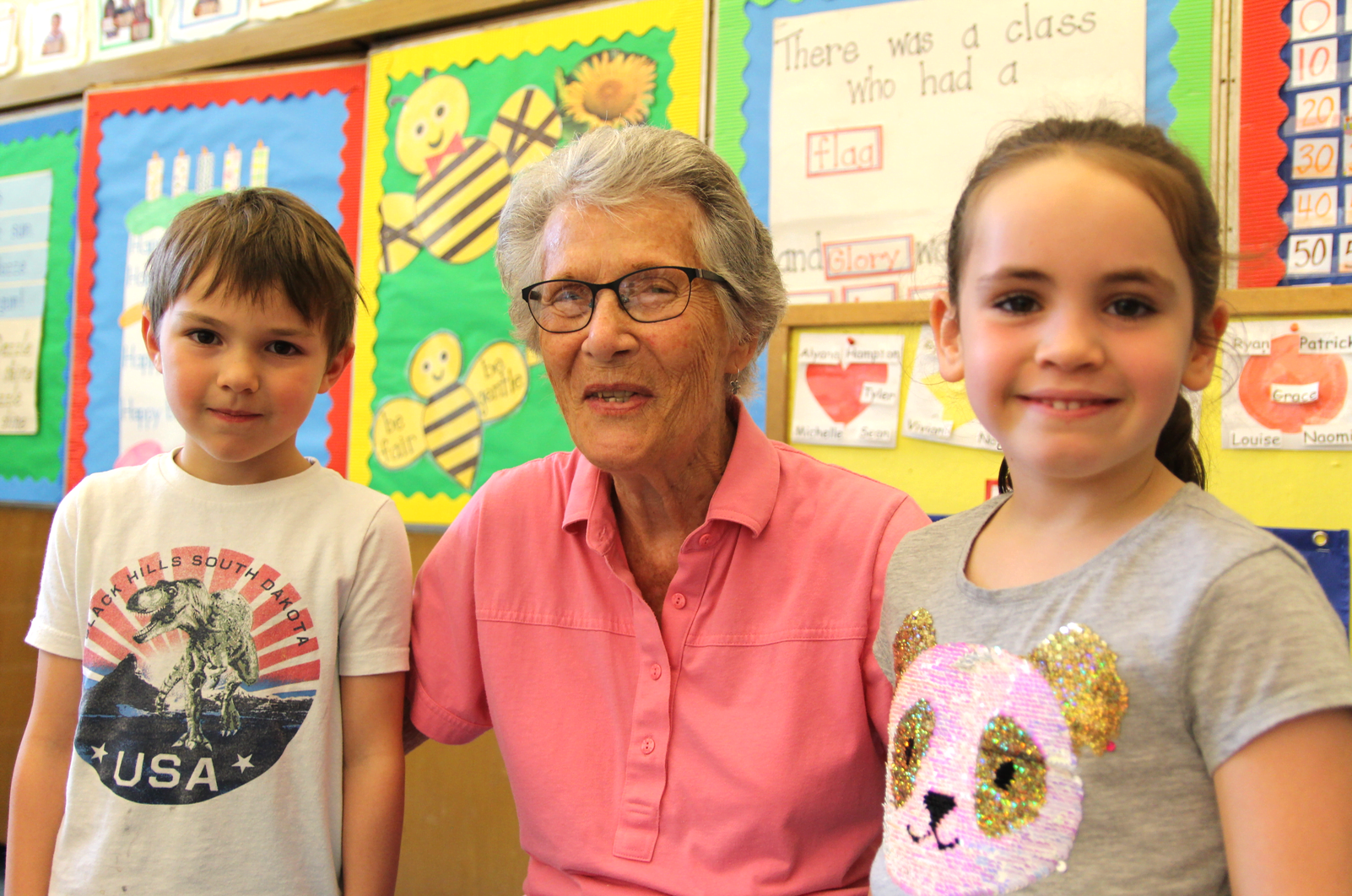 Bobby Littlefield with Nate and Christine in Room No. 2 at Old Greenwich School. May 30, 2018 Photo: Leslie Yager 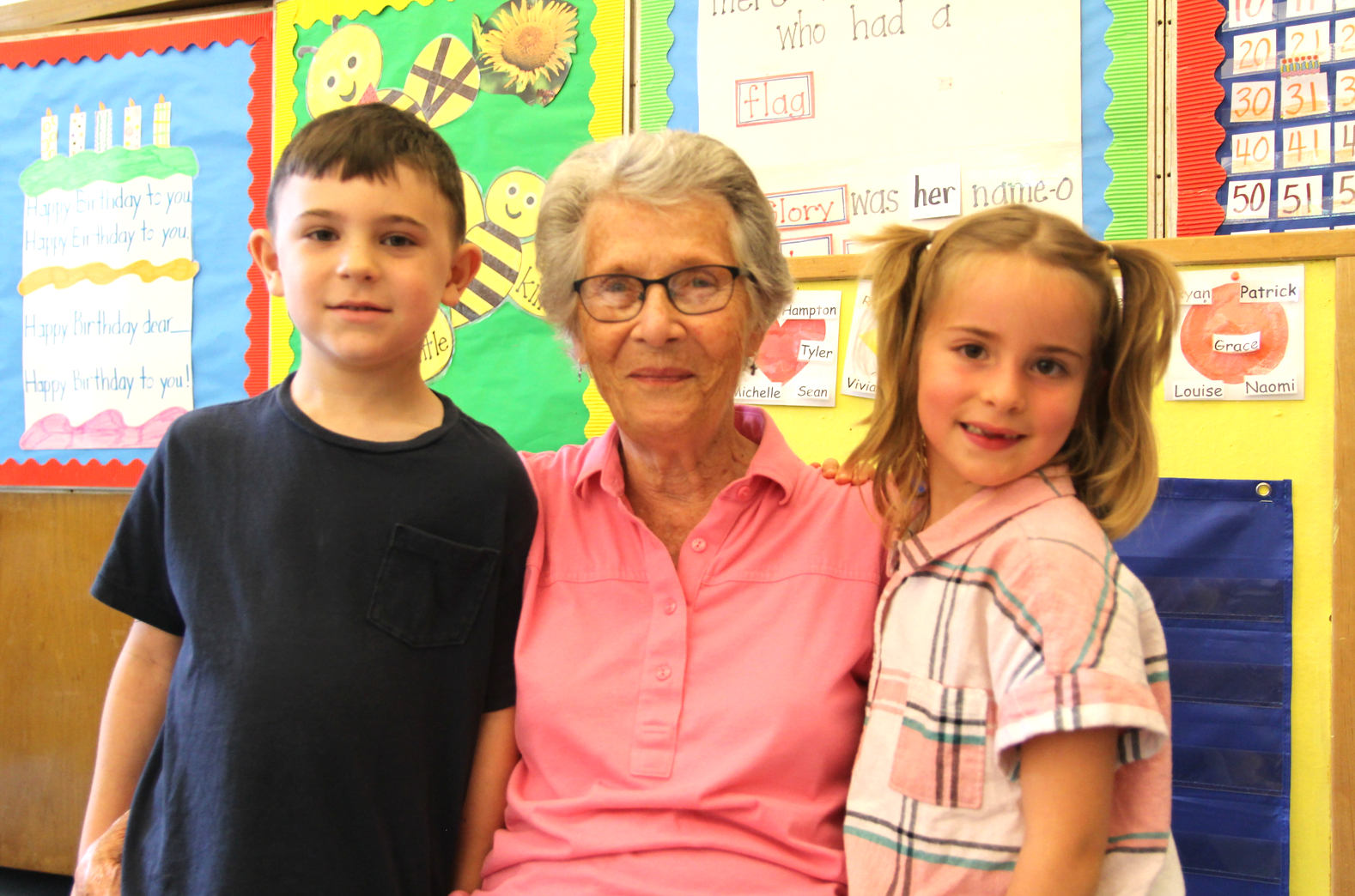 Mrs. Littlefield with Patrick and Sophie in room No. 2 at Old Greenwich School. May 30, 2018 Photo: Leslie Yager 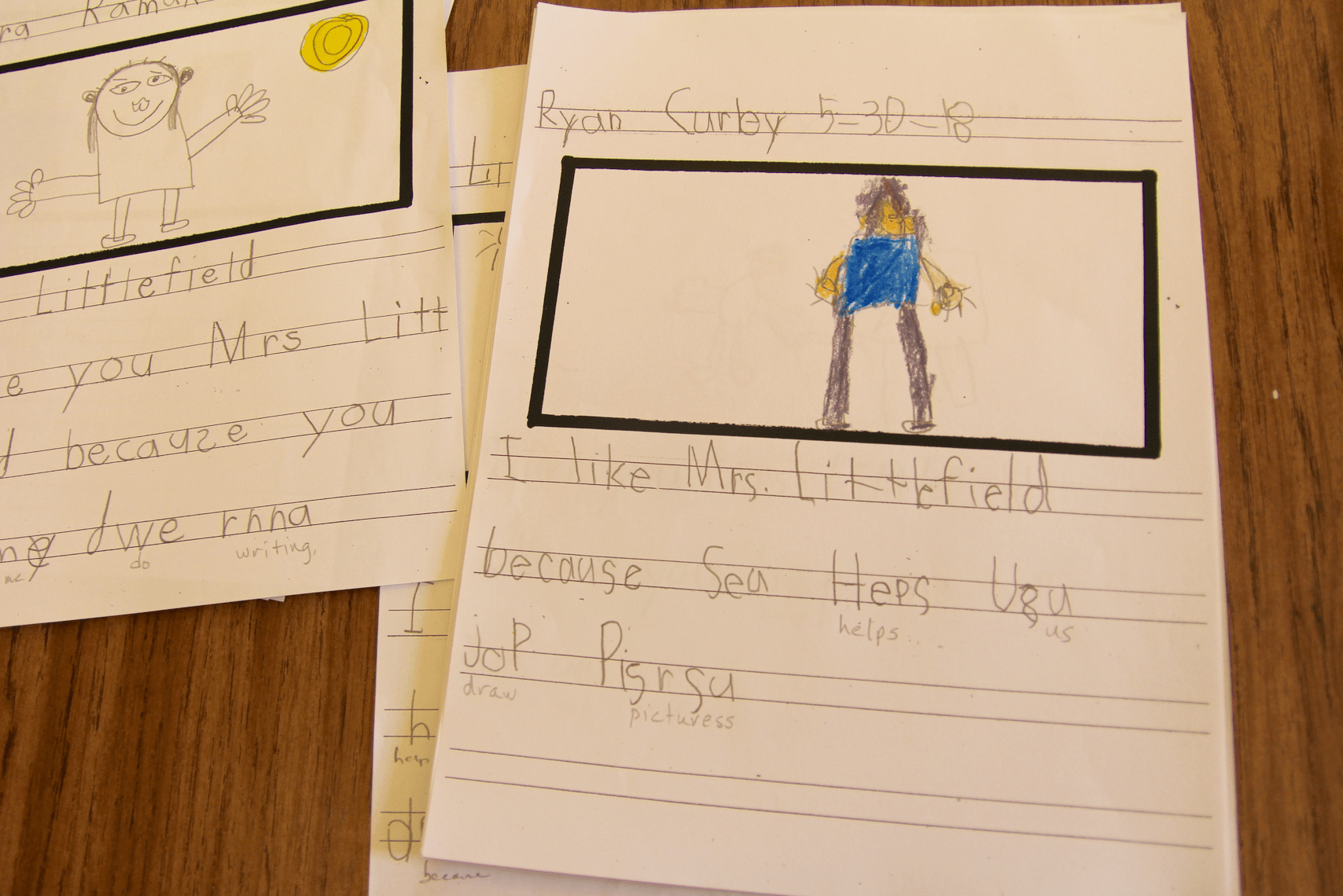 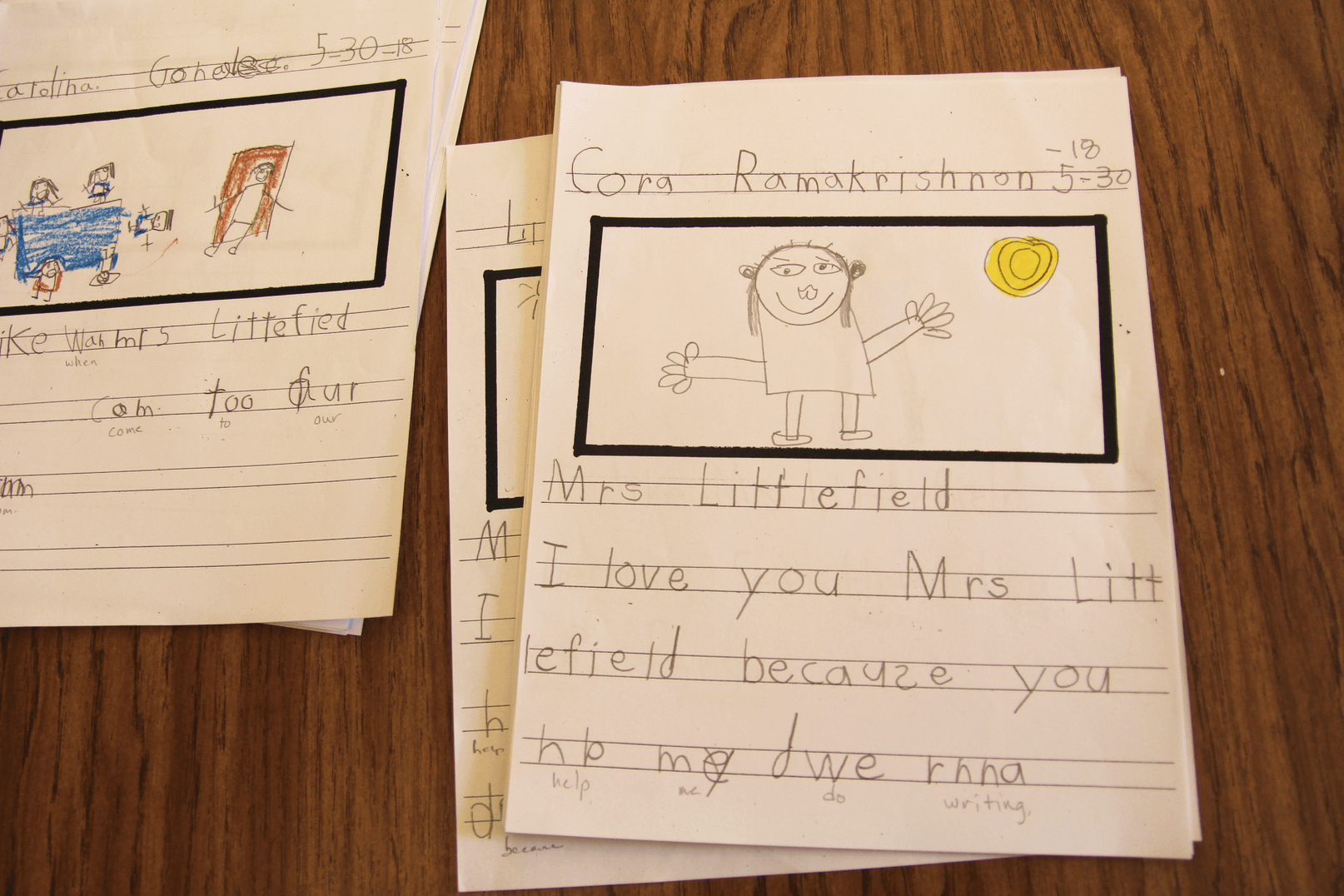 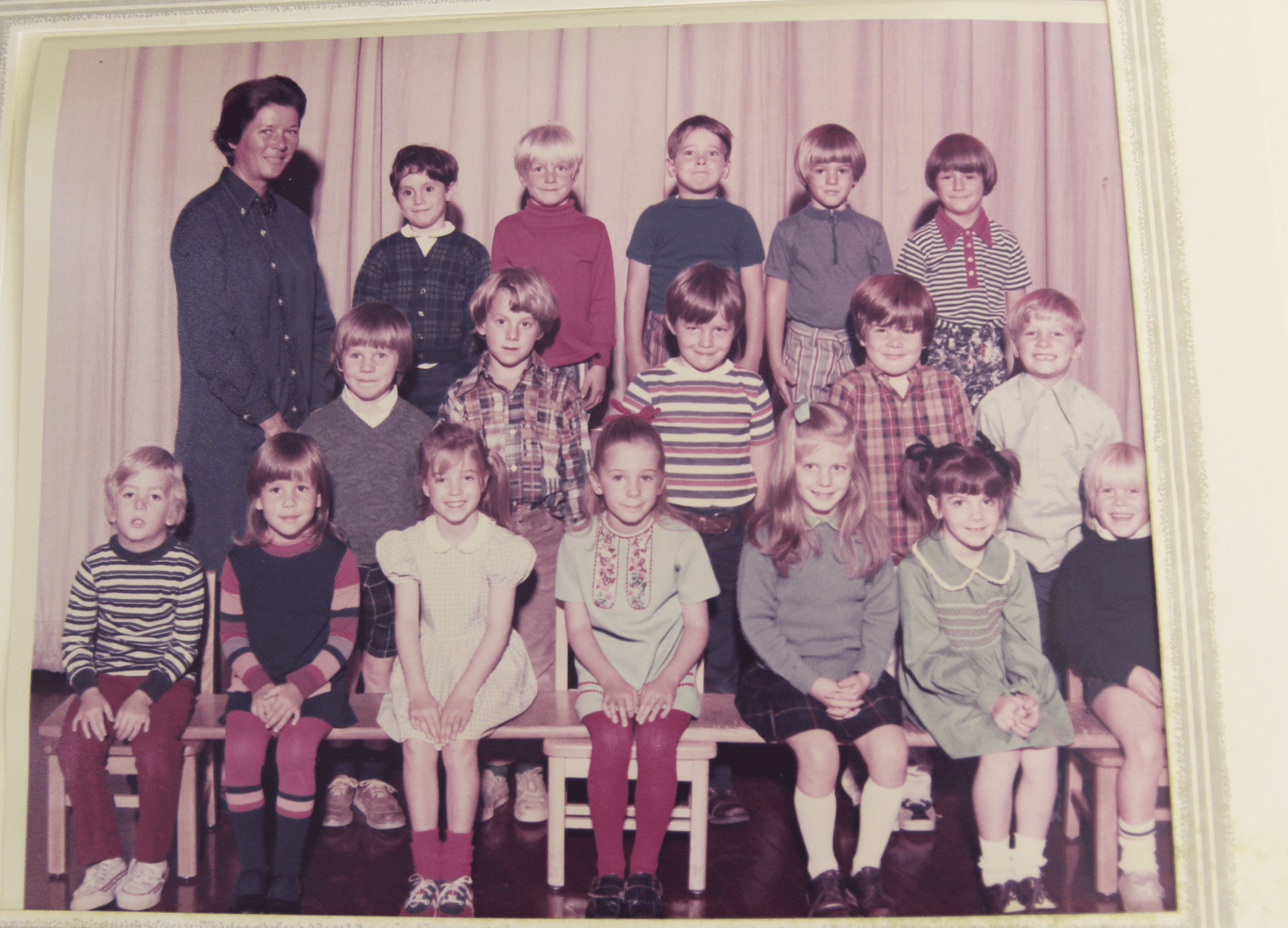 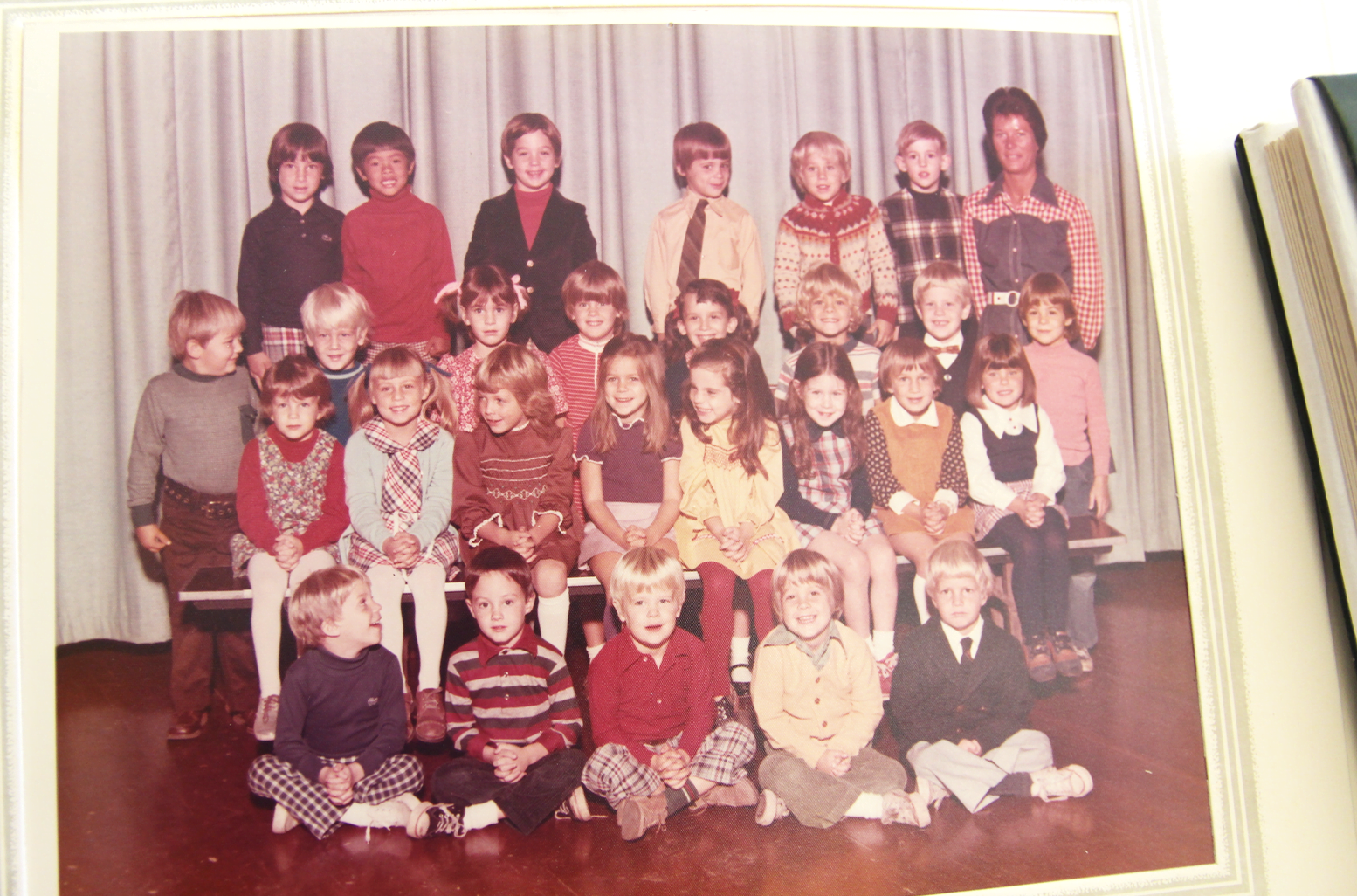 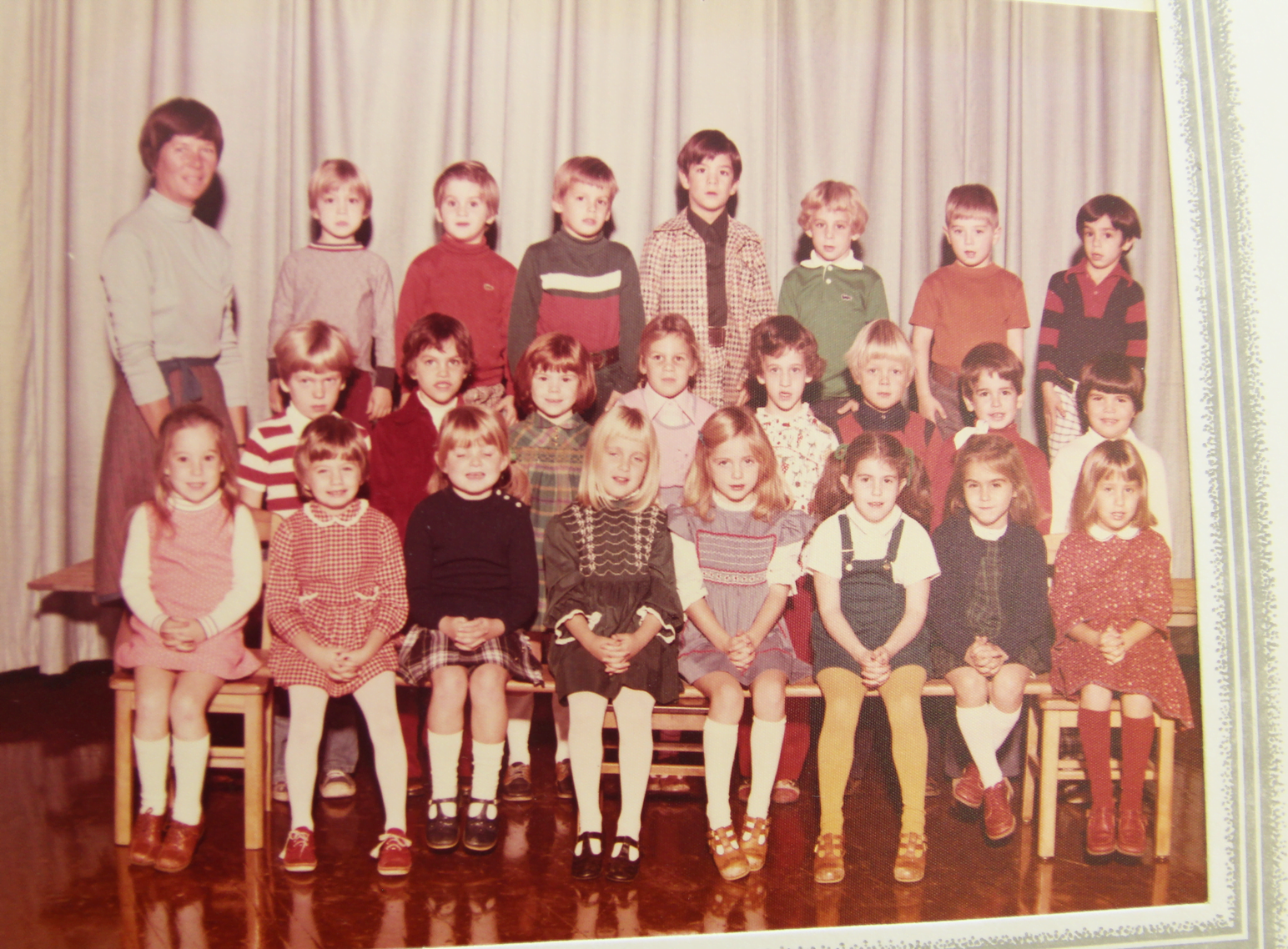