“We’re the last of the Mohicans,” Cos Cob Fire Police Patrol’s chief Brian M. Kelly said of his volunteer organization and the Glenville Fire Police.

There was a time when the Cos Cob Fire Police Patrol only handled Cos Cob calls and there was a fire police patrol attached to each of the town’s fire companies — Sound Beach, Round Hill, Glenville, Byram, Banksville, and Central District. Today, the Glenville Volunteer Fire Co. benefits from the Glenville Fire Police, who provide services both directing traffic and protecting fire scenes and property during fire company operations.

Today, the Cos Cob Fire Police Patrol serves the entire town. They specialize in salvage operations, protecting the protectors and freeing up resources. “Our services to the town have not changed since 1927,” Kelly said. “We assist in fire salvage operations assist with fire suppression, traffic contol and work with Greenwich Police on special police details when needed by the Chief of Police. The only changes are that we no longer have the power of arrest, but we can give out parking tickets for fire hydrant and fire lane parking or standing.”

Kelly, who joined the Cos Cob organization at 18, and served as Captain from 1997-2006 before becoming its first Chief Officer, is the keeper of the archives for the organization. In fact, Kelly has a keen interest in the Town’s history as he is a descendant of one of the Town’s original families, the Mead family, and greatly interested Greenwich’s 375 anniversary. Kelly’s grandfather, Aubrey E Mead Sr, was Captain – Chief Officer of the CCFPP from 1957-18. The family has been actively serving the CCFPP for over 64 years.

Paging through scrap books that chronicle the decades, yellowing news clippings, Polaroids, and photos that evolve from black and white to color, he shares memories of his grandfather. 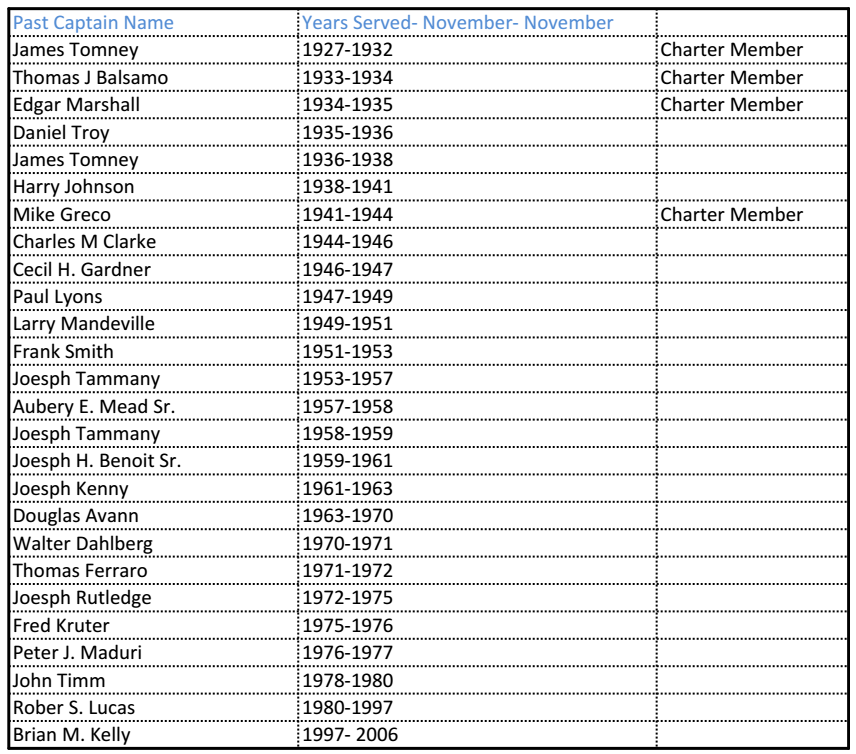 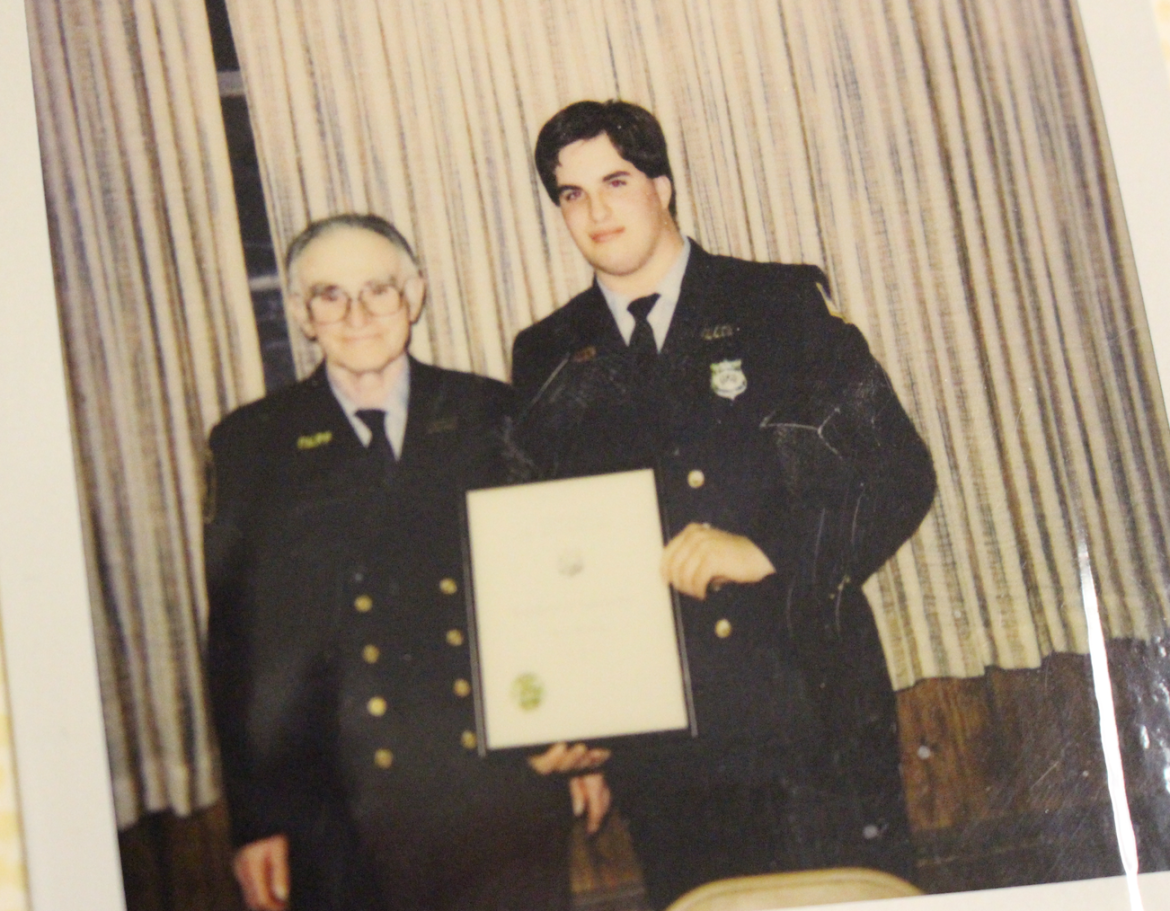 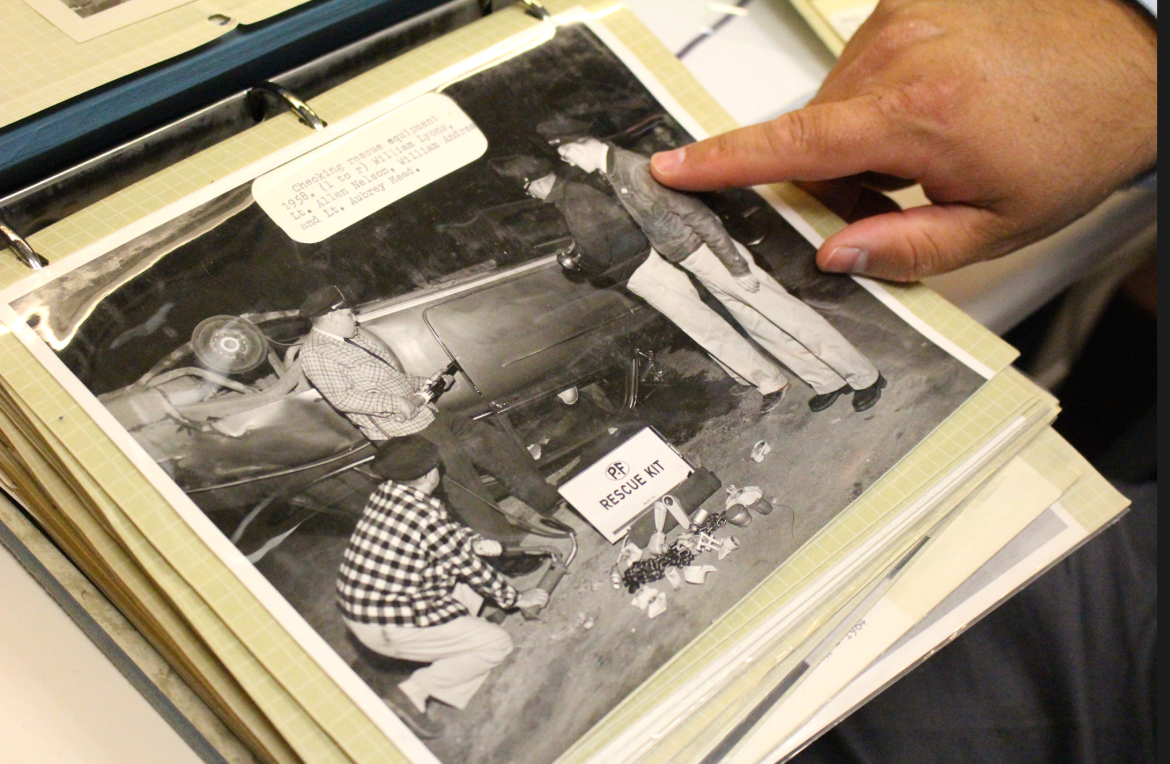 A 1958 photo of Cos Cob Fire Police Patrol testing equipment that predated the Hurst tool, also known as Jaws of Life. “They’re wearing their 8-point caps and shirts and ties from work. Nowadays we have to wear full gear,” Kelly said. 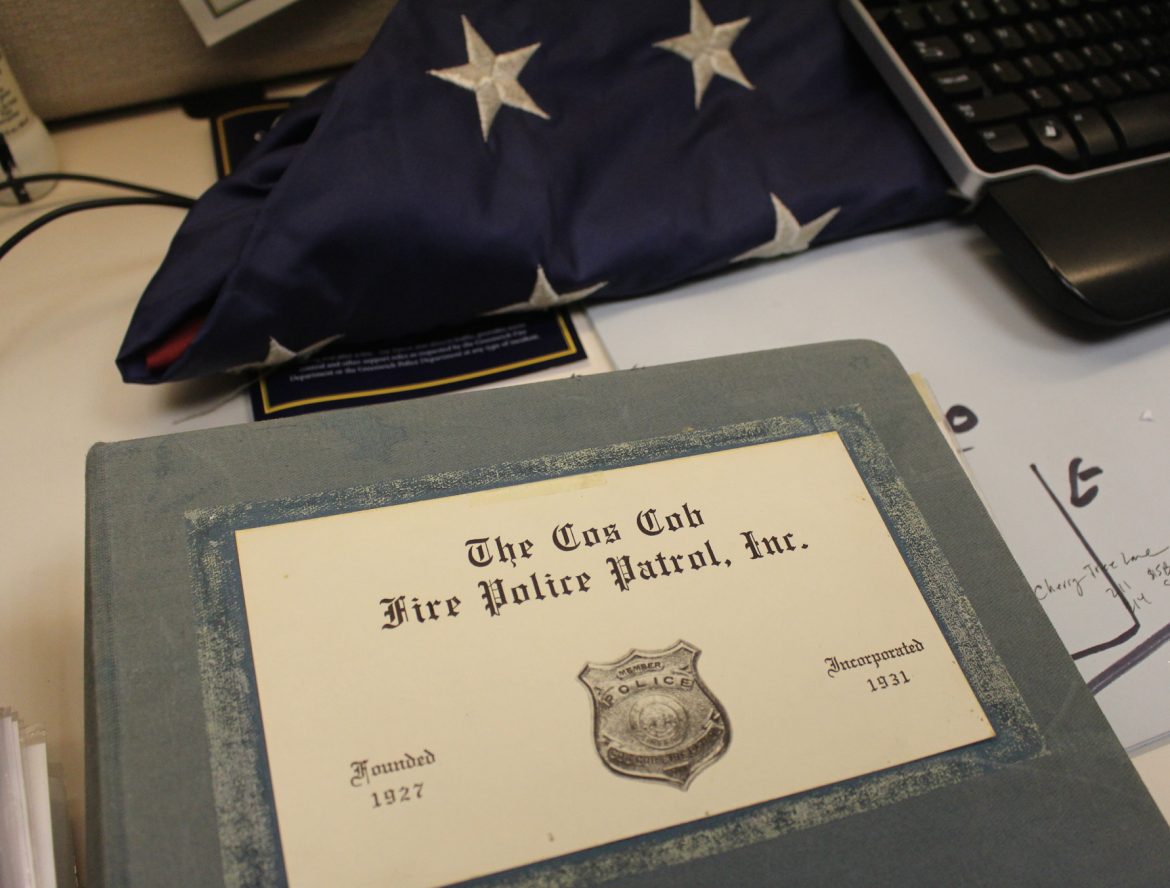 The Cos Cob Fire Police Patrol, founded in 1927 and incorporated in 1931, was modeled on the New York City Fire Patrol, which was created by the New York Board of Fire Underwriters, and operated from 1839 until 2006.

Their original mission was to discover fires and to prevent losses to insured properties. The New York City Patrol responded primarily to fires at commercial structures. During the fire the Patrol would spread canvas salvage covers, remove water, operate elevators and secure utilities. Fire police have been around since 1803 as the first paid fire service in New York City, which predates FDNY by almost 80 years. According to Kelly, to fund the city Fire Patrol in the early 1800s the city imposed a two percent fire tax on all commercial properties. 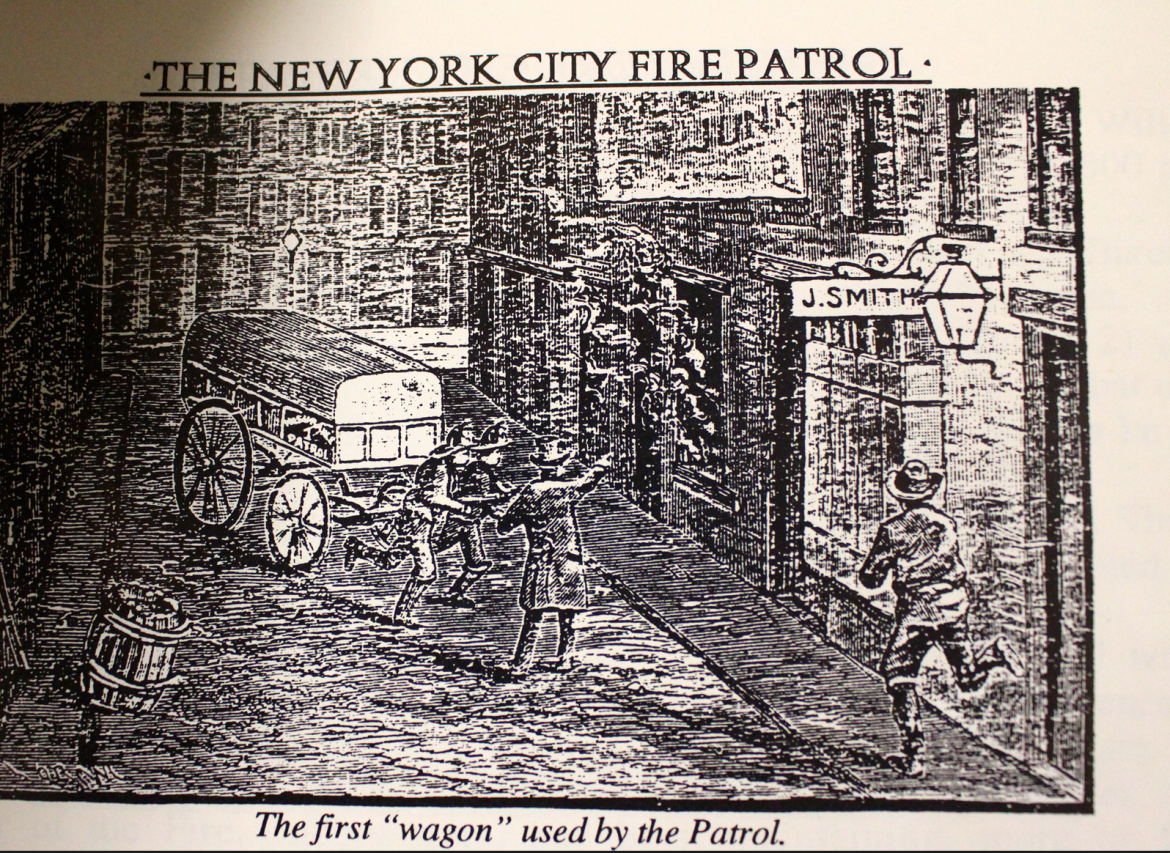 In the early days of the New York City Fire Patrol, a hand-drawn pie wagon was used to carry equipment to the scene of a fire.

Baby Ratchets and Pie Wagons
The concept was to save inventory. “The motto was ‘ever ready to save the stock,'” Kelly said. The underwriters paid employees called fire police to patrol the streets of New York City at night,” Kelly said. “If there was a fire they’d use their baby ratchets, which were basically noise makers, to alert people and fire police patrols in other areas that there was an issue.”

In response, fire police would send out the pie wagon. In the days of horses and buggies, all the equipment was delivered to the scene via hand drawn wagons, the same ones the vendors used. “The term carried over to us,” Kelly said. “The last living Charter Member of the Cos Cob Fire Police Patrol, Tommy Balsamo, who died in 2000, called the truck a wagon.” 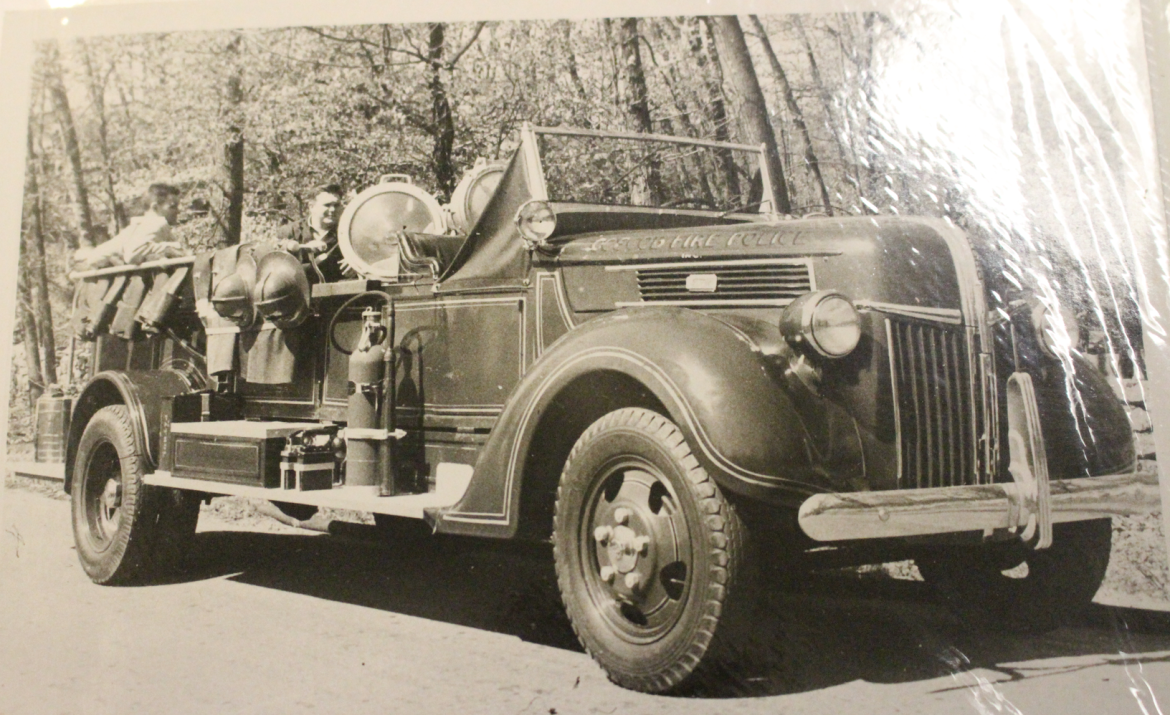 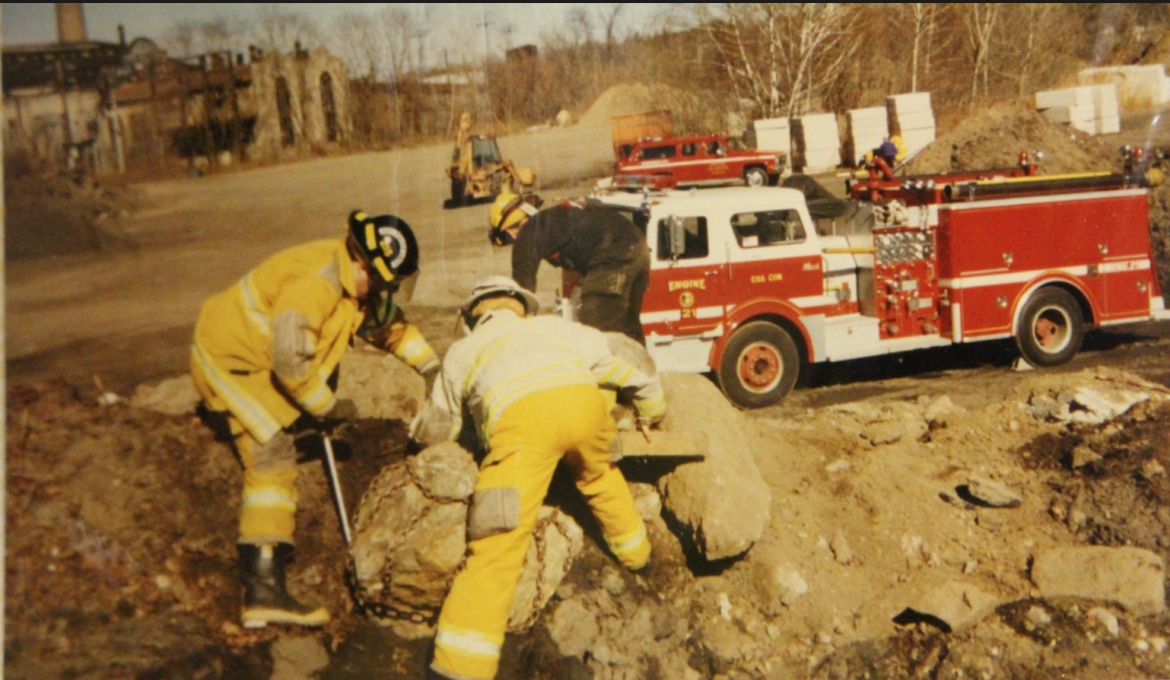 Back in March 1996, Brian Kelly who was First Lieutenant at the time, with the then chief Thomas Anderson at Cos Cob Power Plant performing weekend drills including moving heavy objects.

Before the fire house’s modernization was completed in 2004, there were horns on the fire house, powered by an air compressor. “Five blasts meant no school, snow day,” Kelly recalled. “One-one-one was the signal for fire police.”

Today the Cos Cob Fire Police Patrol, like the original patrol in New York, salvage valuables during emergencies. When thousands of gallons of water come in through a hole cut in the roof upstairs, the CCFP are likely to be downstairs covering furniture with tarps and setting up a water slide.  When frozen pipes burst in winter time, there they are protecting items from the ravages of water.

Where do thousands of gallons of water go if they’re not directed out of a structure? Back in the 1950s Kelly’s grandfather Aubrey Mead fashioned a homemade canvas waterslide. Today waterslides are commercially produced, but just like the big hand augur used to make a hole to drain the water, but the CCFPP have held onto the old equipment as a benchmark of their progress. 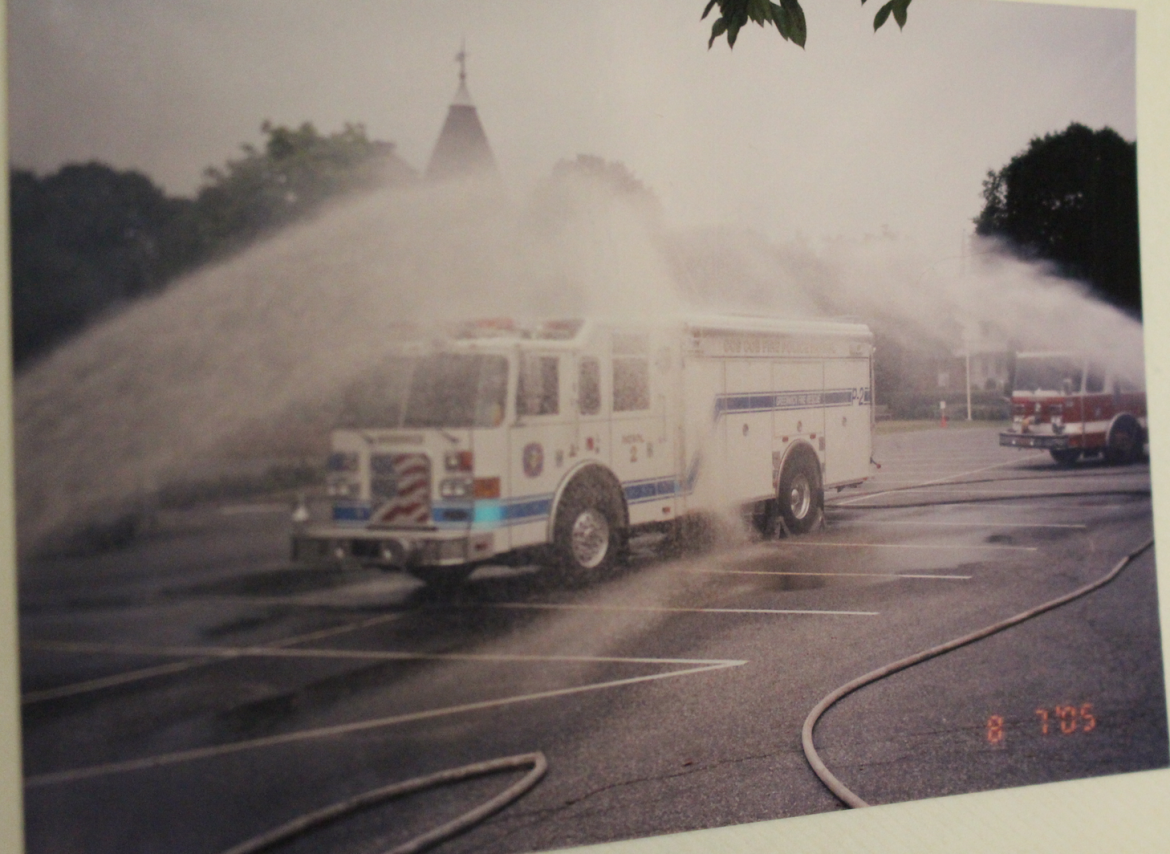 These days the patrol is fundraising for a replacement utility truck, at an estimated cost of $150,000. The vehicle houses equipment for directing traffic, pumps and supplies like tarps for salvaging inventory, and can be driven by the younger volunteers, 18-21, who aren’t allowed to drive “Patrol 2,” the big blue and white truck.

The CCFPP protect furniture and computers as well as personal memorabilia, mementos and other items that are irreplaceable.”We throw salvage covers, gather up pictures, move computers. We may say to the homeowner who has been evacuated, ‘What do you need taken away?’ and they’ll ask us to get Great Aunt Edna’s painting on the wall.”

“I remember manning a table for volunteer recruitment at the St. Catherine’s fair one year,” Kelly recalled. “A man I didn’t recognize came to thank me. He said ten years earlier when he was out on the sidewalk as firefighters fought a blaze in his home, we had gone into the house and retrieved some items that were valuable to him. I don’t remember what the items were, but it made a difference to him,” Kelly said.

Second, the fire patrol protects the protectors. For example, when there is a motor vehicle accident and the scene is teeming with ambulance, police and fire officials, the Cos Cob Fire Police Patrol are the guys in the back setting up the flares and directing traffic.

Years ago Lt. Jim Pucci was hit by a car when he responded to an accident and nearly lost his life. “He had gotten out of the car but there was no protection for the protectors. He lost his leg in the accident,”Kelly recalled. 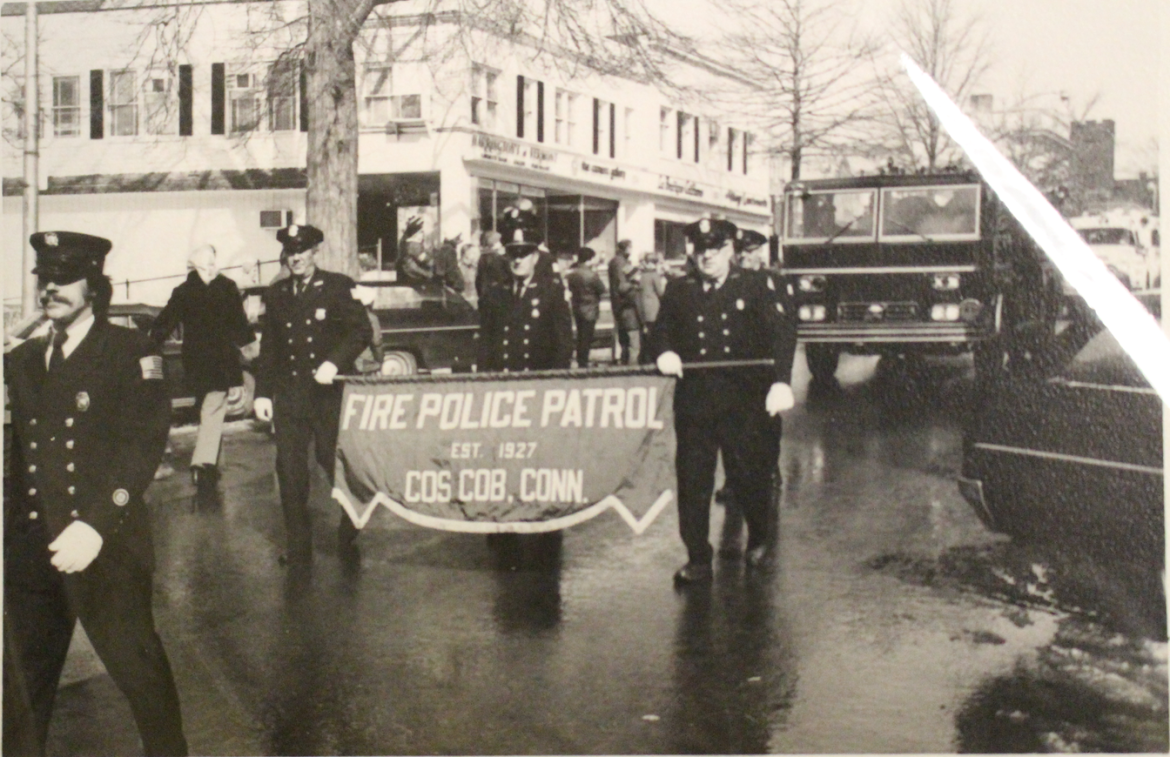 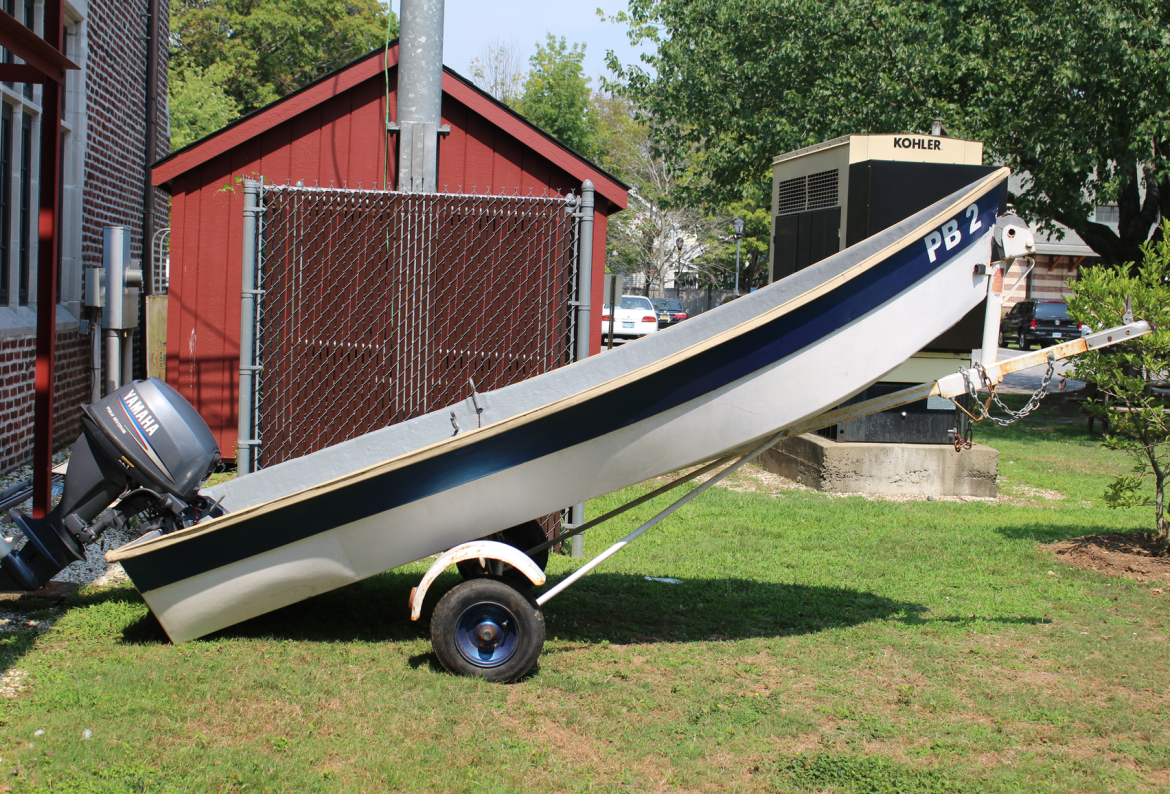 The fire police work is also valuable in that it frees resources so officers can go back on patrol. If there is a downed wire, an accident or fire scene — any place you might expect emergency responders — they can come in and relieve them. “So they can go to a burglary or another fire call,” Kelly said.

Kelly said that during the series of freak storms in recent years, the CCFPP has kept very busy.

“During a storm we are out in full force augmenting the ranks of the first responders,” Kelly said, adding that the fire police have their own flat bottom boat. “I can’t count how many times we’ve used the boat to get up Orchard Street during floods.”

“We cordon off downed wires and close roads. We rescue property, clean up after fires and if there’s a motor vehicle accident we block lanes and divert traffic around fires and highway accidents.”

Kelly pointed out that the Greenwich municipal code was updated in 2007, with new rules and regulations outlining what the fire police can and can’t do. “We have a job description,” Kelly said. “If the police department needs us for a special detail, like a presidential visit, we’ll work the perimeter doing traffic control.” Another example of a special detail assigned to the fire police took place in 2003 during the Brown Out. “The police department set up a mobile command post here in Cos Cob, and posted fire police along the Post Road because all of the street lights were out.”

“With all these nutty storms we’ve had in recent years, you need a lot of people who know how to problem solve and be sympathetic to the public,” Kelly said. In 2007 when there was yet another storm with high winds and heavy rain. Police, fire and GEMS were all occupied.  Kelly recalled how the pressure on the sewer system was over-run.

“The caps to the sewers system were popping up,” he said. “The pressure built up on the lowest point. At one home on Water Street in Byram a homeowner had a toilet int he finished basement. It was throwing up. It looked like something out of a horror movie — like a geyser. We made the house safe, shut off the utilities.” 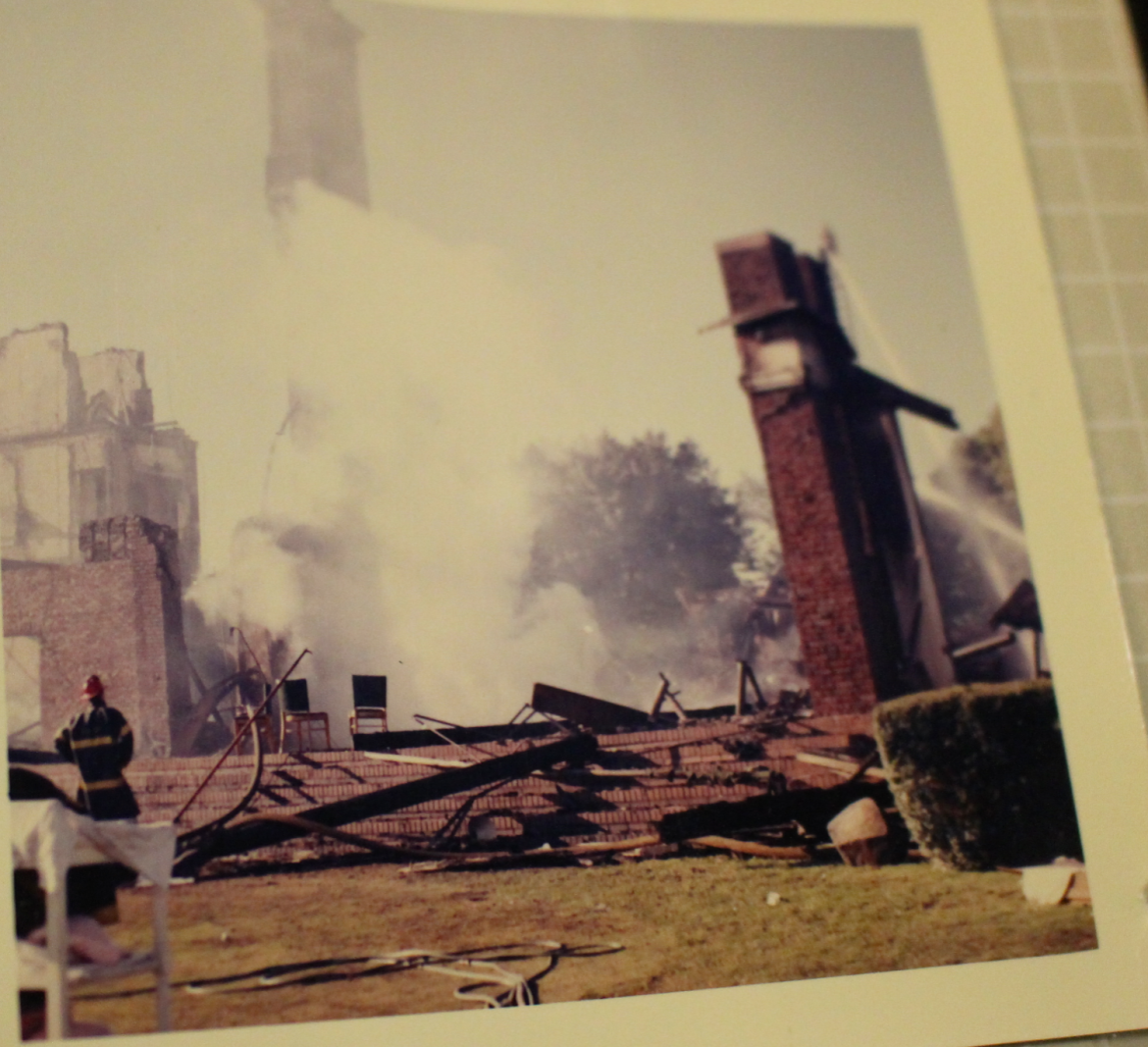 If you are interested in joining the Cos Cob Fire Police Patrol or any other volunteer fire company in Greenwich, please contact Chief/Greenwich Fire Dept volunteer coordinator Brian M Kelly  [email protected] and office line 203-618-8877