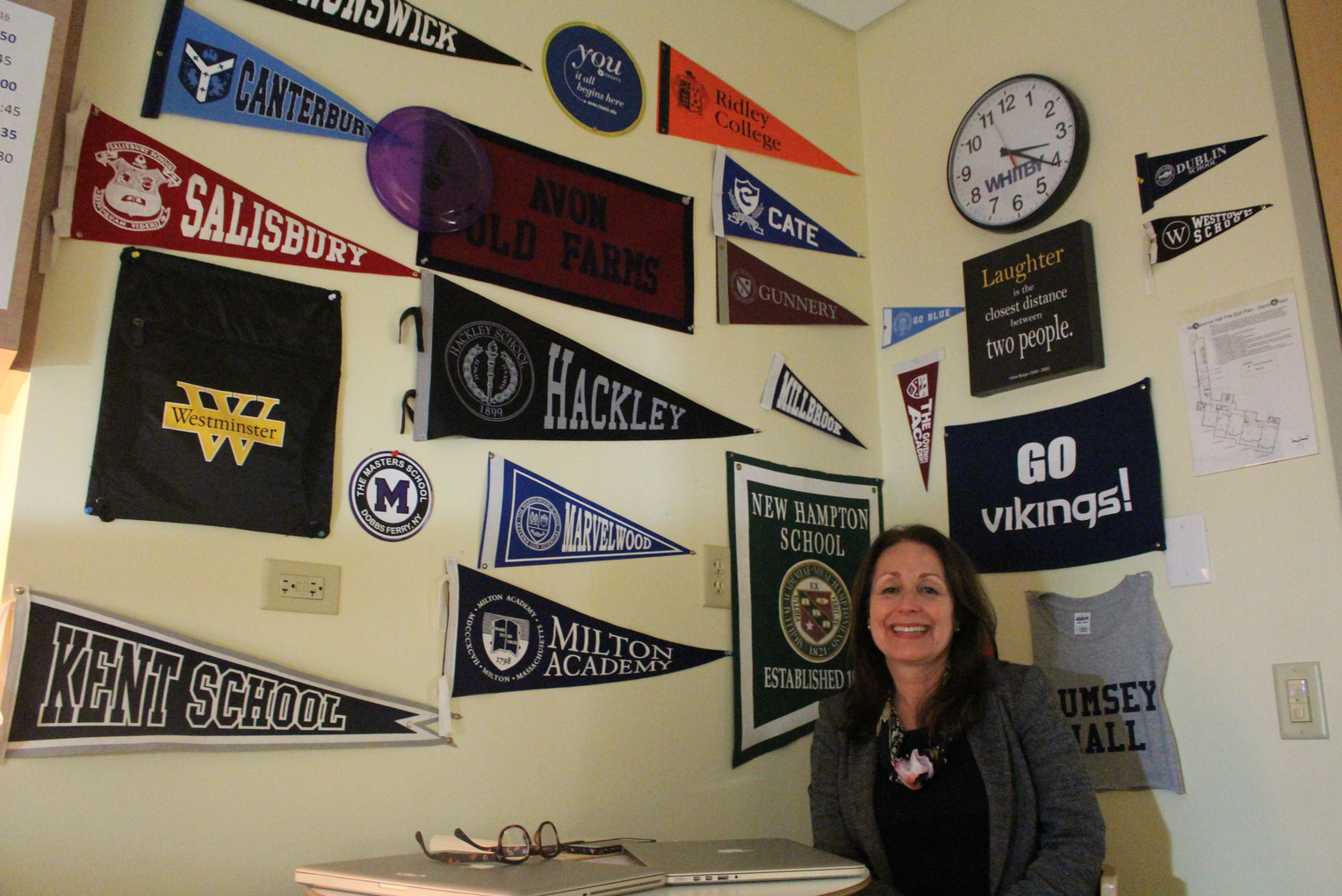 Whitby is growing. Enrollment is up. There are 16 eighth graders this year and next year there will be 36. The school constructed an addition to house more classrooms. A new gymnasium is under way. The Whitby magic is drawing more and more students. Yet, after 8th grade, perhaps reluctantly, students must move on.

Enter Jacquie Quigley, Whitby’s Director of Upper School Admissions and Secondary School Counseling. Quigley, who has been at Whitby for four years, said secondary schools are impressed by Whitby students, both for their uniqueness and their self-awareness. That is no accident. According to Quigley, Whitby students and their families are mentored through the school search starting in 7th grade.

“These are not cookie cutter kids. Each child is different. That’s what’s appealing to other schools. They are in touch with who they are,” Quigley said.

Quigley, who has a private education consulting background, was given free reign by Head of School Bryan Nixon to replicate what she did in the private sector. Toward that end, she created a Learner Profile, which is an exercise to help the children get to know themselves better as students. Middle schoolers aren’t inherently introspective, but it is a skill that can be learned and the IB profile embraced at Whitby features a lot of self-reflection.

Beginning  in 7th grade, Quigley has the students fill out an inventory with questions like, How strongly motivated are you to do in school? What are your strengths and challenges? Are your grades a reflection of your ability? What do your teachers say about you? How would your peers describe you?

In the short run, students become self-aware. The dose of introspection goes a long way as they start to build their stories. They think about their goals for 8th grade and what they need to be successful in school. “The children are given ownership of the process. They have a voice,” Quigley said.

“Working with the theater and English departments, we prep the kids for the interviews in a unit called ‘What I stand for’ in 8th grade,” Quigley said. “They understand what they’re passionate about and what they’re looking for, and present themselves appropriately.”

Quigley pointed out that basically interviewing is public speaking. With that in mind, the students’ final project combines English and theater classes. “They come up with either a TED talk or podcast for the project. The unit is called The Power of Words, and it helps the children prepare to write their personal statements.”

By 8th grade Whitby students have acquired the skills they need to explore and evaluate secondary schools, determine whether they are good fit, and articulate their story to admissions staff.

Whitby School hosts an annual secondary school fair in September with Greenwich Catholic School. About 100 local day schools, boarding schools, and religious schools participate. “For 7th graders, the fair is a time for them to get their toe in the water,” Quigley said. For 8th graders, who are whittling down their list of potential schools, the fair is an opportunity to make appointments to interview and tour the schools.

In addition to the fair, Whitby takes the kids to visit boarding schools. “We choose two boarding schools with different size and culture,” Quigley said. “The kids find out what it is like to be in front of admissions staff and tour guides.”

Last year Quigley brought the students to visit Kent and Canterbury. The year before, they went to Avon Old farms and Miss Porters. Before that, they visited Westminster and Suffield Academy. “It’s an important learning experience even if they wind up going to Greenwich High School,” Quigley said. “It’s a great experience. They eat among the kids and experience life in high school.”

Closer to home, during “Whitby preview days” students visit three to five schools in October. Some of the local day schools offer Whitby students a mini open house with a visit by head of the school and admission officers, and a tour of the school while while it is in session.

At the end of October, Quigley takes the kids to see Greenwich High School. They meet with the head of Guidance Dept, Judy Nedell, and the students shadow a GHS student for a few hours. Then, at beginning of December, Quigley brings a group of parents to meet Ms. Nedell, and they too take a tour of the public high school.

Quigley asks 8th graders questions to encourage thoughtfulness: Who are the significant people in your life? What are three words that best describe you? Separately, parents respond to a questionnaire about their child. All the replies return to Quigley, who factors them in as she drafts a list of possible schools.

“A lot of parents aren’t aware of options,” Quigley said. “There is a big world out there.”  Also, there are times when either a parent or their child is determined to stay local, but through the process and self-reflection, they may change their mind and wind up in a boarding school, or vice versa.

Quigley said she comes up with a list of schools for 7th graders. “The list will change. And it should,” she said, describing the process as organic. “They leave for the summer with a preliminary list and use it as a reference point.”

In April, Whitby offers a secondary school panel.  By then, all the 8th graders have made their decisions. They sit on on the panel and 7th graders get to ask them questions without parents present.

“They think, ‘Ahhh, someone else is going through the same thing,'” Quigley said. “It’s very comforting. The kids love it.”