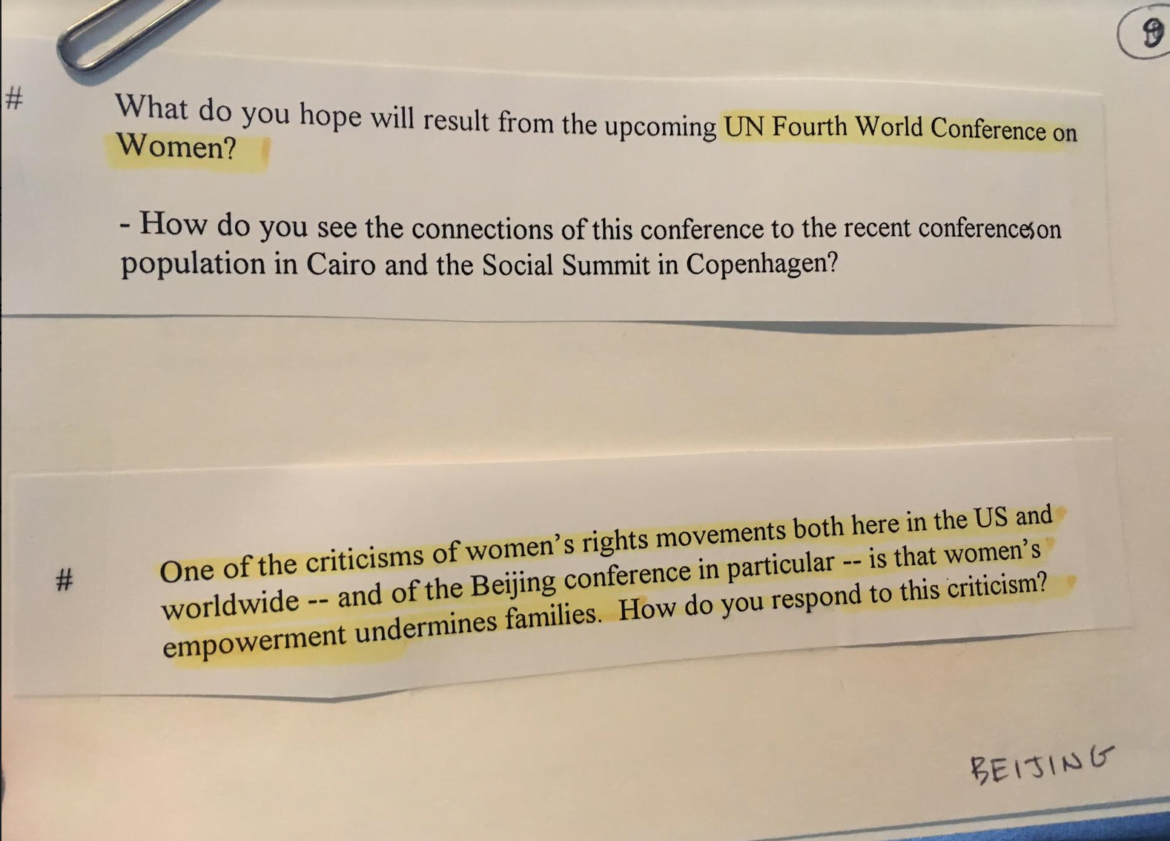 Shelly Cryer’s index cards from her interview with Hillary Clinton in 1995. Contributed

I’m looking at the 5×7 index cards I used when I interviewed Hillary Clinton in 1995. The paper is yellow, but my memories are vivid of the hour I spent in the White House, recording a conversation on an old fashioned audio recorder. I was moved and inspired by Mrs. Clinton’s commitment to the rights of women and children and her dedication to service that seemed to radiate from within. But my most lasting impression was how carefully and intentionally she chose her words, both when we were recording our conversation, and when we weren’t.

I was in my mid-20s, working freelance for women’s and human rights organizations. This job was with the Population Reference Bureau, a respected DC-based nonprofit. I was charged with researching and writing educational materials pegged to the United Nations Fourth World Conference on Women (the 1995 “Beijing Women’s Conference,” that Mrs. Clinton would attend).

As part of my work for PRB, I helped produce a 13-part series of radio interviews with influential women from around the world. I spoke with impressive leaders – heads of state, a vice president, research scientists, an activist. As the project was nearing completion, I wrote to the White House. Would Hillary Clinton serve as the 13th and final interviewee? Her staff responded promptly. Yes.

When Mrs. Clinton entered the interview room, we stood talking before starting the recording. I mentioned that I had just interviewed Princess Chulabhorn Walailak of Thailand. Chulabhorn, a strong proponent for scientific research and an early advocate combating the AIDS epidemic in Asia, was visiting Washington, DC. Mrs. Clinton was to meet with her that same week.

Mrs. Clinton immediately turned the conversation to me, asking me about my conversation with and impressions of the Princess. Minutes typically devoted to small talk instead had substance. I was struck by Mrs. Clinton’s curiosity, and moved by the intelligence of her questions, her quiet attention as I answered, and her respect for my opinions.

We then sat down to begin the interview, the tape recorder turned on. As soon as I asked my first question, Mrs. Clinton stared down at the table. She remained that way for the 30 minute recording. She was passionate about the issues we were discussing, but she didn’t look up. Initially, I was unnerved. “She seems so serious,” I remember thinking. But I then realized she had much to say, and wanted to be clear.

My children struggle to comprehend that we duplicated these recordings onto audio cassettes, and packed them in padded envelopes, to be sent (by mail) to English-language radio stations throughout the world. Mrs. Clinton understood that these packages were precious, and that her words mattered. She understood that men and women, along with their children – in Africa, Asia, Europe, and the United States – would be listening to her, as an ambassador for the values of our country.

Mrs. Clinton’s had just returned from an extensive tour of South Asia with her daughter Chelsea, then 15 years old. She reflected on what this trip taught her and her daughter about the struggle of women worldwide “to take some control over their own lives,” as she said to me. She brought that global perspective home, saying, “It made me want to redouble my efforts to reach as many American women as I could with the challenge that they, too, can make a difference in their own lives and the lives of their communities, and their nation.”

Hillary Clinton has had a long career with its share of fumbles in words and actions. But overwhelmingly, it’s the career of a woman who dedicated her life to service and recognizes that words matter. She chooses her words with care, respects those she speaks with, and extends dignity to those who have no voice.

If I can find a cassette player, I’ll pop in this 20 year old tape of my Hillary Clinton interview and have my two daughters listen to Mrs. Clinton’s voice … and have them find mine. I’ll remind them that the questions we ask and our ability to listen are often as powerful as our own answers. And I will stress that our words are no less precious today just because we now can transmit them so widely with the mere click of a button.

For now, I’m rereading the transcript, and imagining Hillary Clinton’s clear, steady, informed, and intentional words being the voice for our country and its citizens. I find that thought comforting.