Twelve volunteers were honored and the committee announced that the 2020 PTA Council Essence Award for Excellence in Volunteerism went to Ana Laborde from ISD and Eastern Middle School.

Dr. Toni Jones said said the qualities recognized by the award go to the core of what PTA, “but also what we model for our children – especially thinking about the time we are in right now.”

“PTA in general has really been lifting us all up during this time and letting our staff and teachers know how appreciated we are,” Jones added.

The qualifications include selflessness, ongoing involvement, being a willing team member, a motivator, a person who significantly improved the school community and a representative of the PTA values of collaboration, commitment, respect, and integrity. 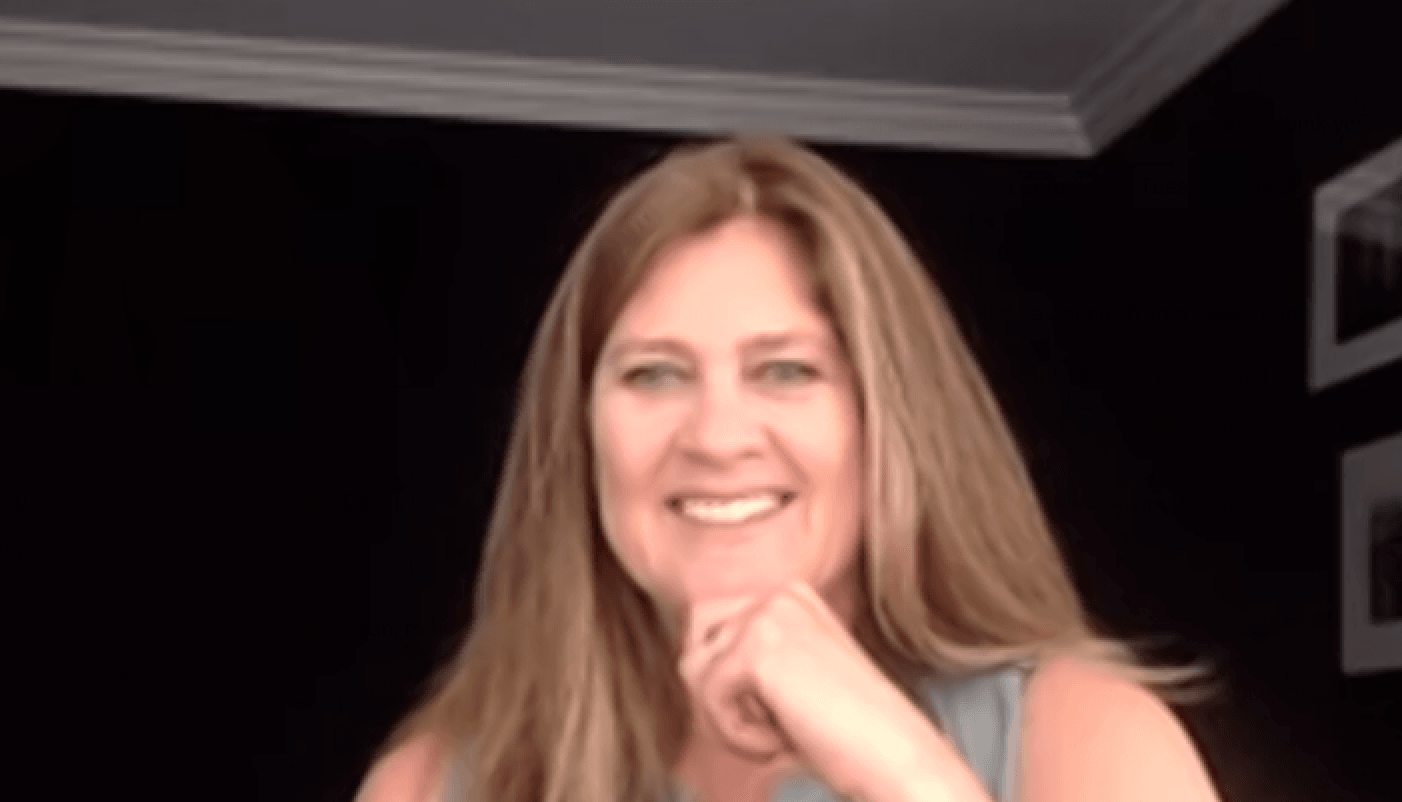 The 2020 PTA Council Essence Lifetime Award for Excellence in Volunteerism went to Maureen Bonanno from Greenwich High School. Screenshot from Essence Awards via Zoom. May 26, 2020

Bonanno, who was nominated by Terry Lamantia, has volunteered for PTAs for almost 20 years as her children attended Old Greenwich School, Eastern, and Greenwich High School.

She is serving as the GHS PTA Co-President and previously was the Old Greenwich School PTA President and served on PTAC as Co-Chair of Academic Excellence.

At GHS, Bonanno has worked tirelessly to enhance the educational experience of GHS students and to support the GHS community. She has been an advocate, supporter and agent for change, making sure that GHS families are well informed about the issues that are affecting GHS and the district.

Bonanno is also a resource for newer volunteers who is always willing to teach others in a kind and patient way.

Next year, Maureen has offered to continue to help PTA Council as the Scholarship Chair and will also be the GHS PTA Secretary.

Shelly Cryer, nominated for the Essence Award by Carolyn Petersen,
Cristina Broderick and Jennifer Bencivengo, has been a dedicated
volunteer at Old Greenwich School and the community at large.

She also volunteers at Old Greenwich School with allergy awareness, as Chair of the school’s Spring Musical, as a Class Parent, as an art room volunteer, and as a parent volunteer to the school’s Music Program. 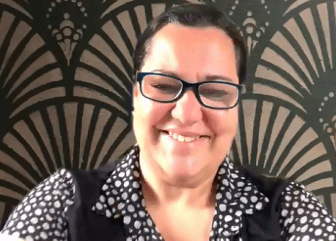 Betty DaSilva. Screenshot from Essence Awards on Zoom. May 26, 2020

Betty DaSilva, nominated by the PTA Board of Directors of Hamilton Avenue School, has been serving as VP of Parents and Community for the past two years. During her time in this position, Betty has also volunteered to help with Box Tops, Picture Day, Hospitality, Teacher Appreciation and the PTA Bulletin Board. Betty organizes and heads up a staff appreciation breakfast in December as a thank you to our teachers during the holiday season.

Additionally, DaSilva organized an effort to collect at least $1 from every student to give as a thank you gift to the two Hamilton Avenue crossing guards who are both WWII veterans. DaSilva is always thinking of new and creative ways to build community engagement and to show appreciation for the Hamilton Avenue teachers.

Maureen Harper from the Old Greenwich School PTA was nominated by Jennette Leal. Maureen has served as Pumpkin Patch Co-chair, VP of Fundraising, and led volunteer efforts for Teacher Appreciation Week, the 5th grade Luncheon, and the year long effort to to plan and execute 5th Grade-specific activities for this year’s graduating class. This year she led the creation of the 5th grade slideshow, spending hours following up with parents to make sure each child was represented. Recently, she contacted every 5th grade parent who had forgotten to order yearbooks for their graduate – whenever she sees a need, she doesn’t hesitate to jump in and help. 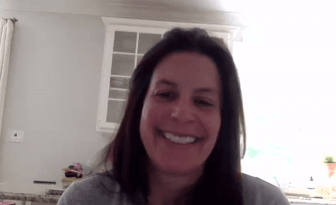 Alison Hoenig. Screenshot from Essence Awards on Zoom. May 26, 2020

Alison Hoenig is our next nominee and she was nominated by the North Street School PTA Executive Board where she has been a dedicated and trusted volunteer for several years. She has headed up Membership, Class Parents, Book Fair Volunteers and Spiritwear. She has served as Secretary and Co-President of the North Street School Executive Board. Hoenig has volunteered as part of the Nominating Committee for PTAC in 2018-2019 and is currently the DLE representative. She is described by her
nominators as being cool under pressure, very diplomatic and professional. This year, as President Emerita, she was an all-around amazing sounding board for the Executive Board to bounce ideas and issues off of all year long. 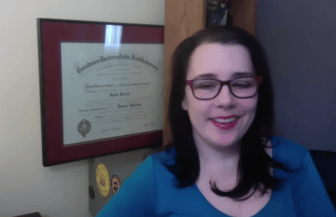 Clare Kilgallen. Screenshot from Essence Awards on Zoom. May 26, 2020

She served as a voting member on the New Lebanon Building Committee, which involved hundreds of meetings over several years – collaborating with architects, community members, construction teams, and many others. Her steadfast efforts paid off greatly, as the community received what was well deserved. The New Lebanon Community is thankful to Clare for her years of service. 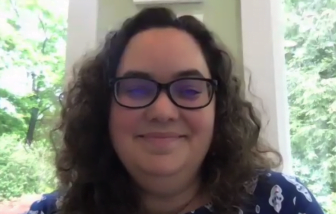 Ana Laborde, nominated by Angie Hartofilis and Kaori Higgins, has volunteered at ISD, the larger Greenwich Schools district, and the community.

Laborde offered to serve  a third term as ISD Co-President when her Incoming Co-President had to move unexpectedly. One of her lasting contributions was bringing the Membership Toolkit to Greenwich PTA’s. The Toolkit is a versatile management website that multitasks as a database, communications, volunteer system, self-building directory, online store, donation center and report generator all in one place.

Her achievement was the inspiration and impetus for other Greenwich Schools schools in our district and Fairfield County to incorporate Membership Toolkit as well.  The Toolkit has eliminated countless manual volunteer tasks and enabled volunteers to put their time and effort into other areas.

Kerstin Montenegro, nominated for the Essence Award by Reina Medrano, has been an invaluable volunteer at Hamilton Avenue School for the past five years. As the VP of Volunteers, she has worked to create a community of volunteers who feel valued and represents the makeup of the school.

Montenegro also chairs the committee of volunteers that helps with Friday Folders and copies for teachers and is a regular in helping with International Night, fluoride rinse, and just about any time that volunteers are needed.

Montenegro has created a welcoming environment for other parents to volunteer, including those who may not be proficient English speakers. Her work has created an environment where inclusivity blossoms, community is built, and information is shared.

Dina Murphy has volunteered at Riverside School, Eastern Middle School and on the PTA Council for many years, putting in countless hours to make these schools better places and has become a go-to resource for others in all of these organizations. She has served as the Riverside Run Chair, VP of Class Parents at Riverside School, PTA President at Riverside School, the VP of Communications at EMS, and as PTAC Scholarship Chair. She was nominated for the Essence award by Sarah Fugelsang and Stephanie Bastek.

While Murphy was PTA President at Riverside School, she worked to overhaul the school’s deteriorating outdated cafeteria. She worked with the school administration, parents and the Greenwich department of education officials to make the project happen.

Murphy stayed involved even after she had completed her term as PTA President to work through countless details, and has shown this same commitment and dedication at Eastern Middle School where she has served as VP of Communications.

Marla Leamon Nedder was nominated by the North Street School Executive Board and has been volunteering there since her daughter first started kindergarten. Nedder initially volunteered planning Cultural Café and Assemblies and subsequently stepped into the role of Vice President of Education.

Later on, she was NSS’s SIP and Academic Excellence representative and lately has been the Co-President for the last two years. Marla is an incredible team player and always puts the needs of the children and school at the forefront of every conversation. She views the PTA’s role as support for the Principal, administration and staff in all aspects.

Geovana and Geancarlos Sanches, a couple who were described as a volunteer “package deal,” were nominated together by Reina Medrano for their work at Hamilton Avenue School.

The couple were volunteers during their older son’s years at Hamilton Avenue, and have continued that effort for their younger son’s years at the school as well. They are regular volunteers for Friday Folders, and show up for the book fair and class activities. They have also served as been class parents.

Geovana and Geancarlos have been in Greenwich for a number of years, but are originally from Brazil. Their presence at school is a huge aid in communicating with their Portuguese speaking
families who may not be English proficient.