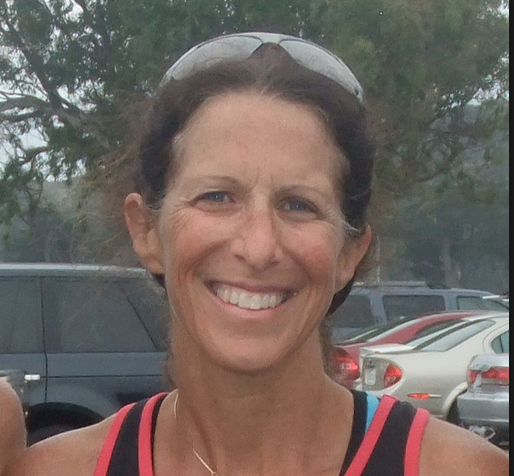 Greenwich resident Sharon Vos will discuss how she does it, competing in strenuous running events that daunt younger people.

In 2015, at 60 years of age, coming in first in division in the Boston Marathon.

In 2010 finishing 1-2-3 in the women’s race in the Lake Merced 4.5-miler in San Francisco with her two identical twins?

Vos and her sisters ran track for one year in high school, but she didn’t compete at the University of Puget Sound in Tacoma, Wash., where she majored in international business.

In fact, her running career didn’t really begin until 1981, when she was living in Brussels, Belgium, with her husband, Joost, whom she met while she was an exchange student in Holland. “My husband, a friend and I wanted to get into better shape,” she recalled.  “Our goal was to see who could first run a mile without stopping. I won. We then ran the 20K in Brussels in 1982 purely to try it. My goal was to finish without walking.”

After moving to New York City in 1983, Vos began running regularly in Central Park, and after watching the 1984 New York City Marathon decided it was something she wanted to try.

She finished the 1985 race in 3:32. In 1989, after taking time out to give birth to her oldest daughter, Jennifer, she lowered her time to 3:02. Vos added a second daughter to the family, then became even more serious, turning in her marathon personal best of 2:57:32 in the 1994 Marine Corps Marathon, when she was 39.

The Greenwich Retired Men’s Association offers a free program every Wednesday that is open to the public, both men and women; no reservations are required.

The RMA takes it social break starting at 10:40am, followed promptly by their featured speaker at 11:00am.

Programs are at the First Presbyterian Church, 1 West Putnam in Greenwich. For additional information see www.greenwichrma.org or contact [email protected]