Downtown Greenwich is undergoing a transformation.

In particular, century old multi-family homes in walking distance to the train, restaurants and shops are giving way to new construction designed to reflect the way people live today.

Mother and son real estate partners Rosemarie and Anthony Longo of Longo Realty Group, a division of William Raveis, are positively rosy about the future of downtown.

“Interest rates are at a two year low,” Rosemarie said during a tour of new construction at 255/257 Bruce Park Ave, where her husband Tony Longo and his partner Mike Jedlicka are building four town homes.

“Interest rates still drive the market,” said Rosemarie, adding that she and Anthony have a combined 25 years of real estate experience. But, beyond interest rates, she said walkability sells.

“It’s .3 miles to the train station,” Anthony said. “It’s a short walk to the restaurants and shopping on Greenwich Avenue, the movie theater, Island Beach Ferry and the amenities of Bruce Park, including tennis courts.”

While the Planning & Zoning commission changed the regulations to limit multi-family dwellings in the R6 zone to two units, the lot at 257 Bruce Park Ave was oversized at a half acre, and the Town approved a subdivision.

That allowed the development to feature a total of four units – two in front and two in back, each with three bedrooms. The front units are 2,400 sq ft and have attached garages. The rear units are slightly larger with 2,600 and 2,700 sq ft respectively, plus garages and elevators.

Rosemarie and Anthony both see downtown Greenwich properties as the bright spot in the current real estate market.

Anthony, who worked for several years as an analyst at a Stamford hedge fund said he was itching to follow his entrepreneurial spirit and has a great working relationship with his mother.

“Nothing is a waste of time,” Rosemarie said of Anthony’s years as an analyst. “He can pull all the information into a spread sheet.”

“Luxury buyers like to analyze, and if you have that type of experience, it converts well,” Anthony said, adding that he creates spreadsheets with comparable interest rates, property taxes, and square footage, and also factors in changing municipal regulations and trends when he works with his clients.

“Luxury buyers are attracted to downtown because it will always have good resale value,” he said.

Anthony and Rosemarie said buyers of town homes in central Greenwich fall broadly into two categories: millennials coming out of New York City and back country empty-nesters seeking to downsize.

“Millennials are attracted to urban living and like a turn-key, easy way of living,” Anthony said.

“They want to pay a common charge that includes snow plowing, lawn care, garbage and grounds maintenance,” Rosemarie added. “They appreciate having a home owners association and exterior insurance from the walls out. Plus they don’t want to spend their weekends doing yard work.”

Rosemarie and Anthony agreed that all those features also attract empty-nesters.

“The convenience factor withstands all the ebb and flow of the market,” said Tony who joined the conversation. The family seeks to become a “one stop shop for all things real estate.”

“Even people who know they’ll only be here for three years know their property will resell,” Anthony said. 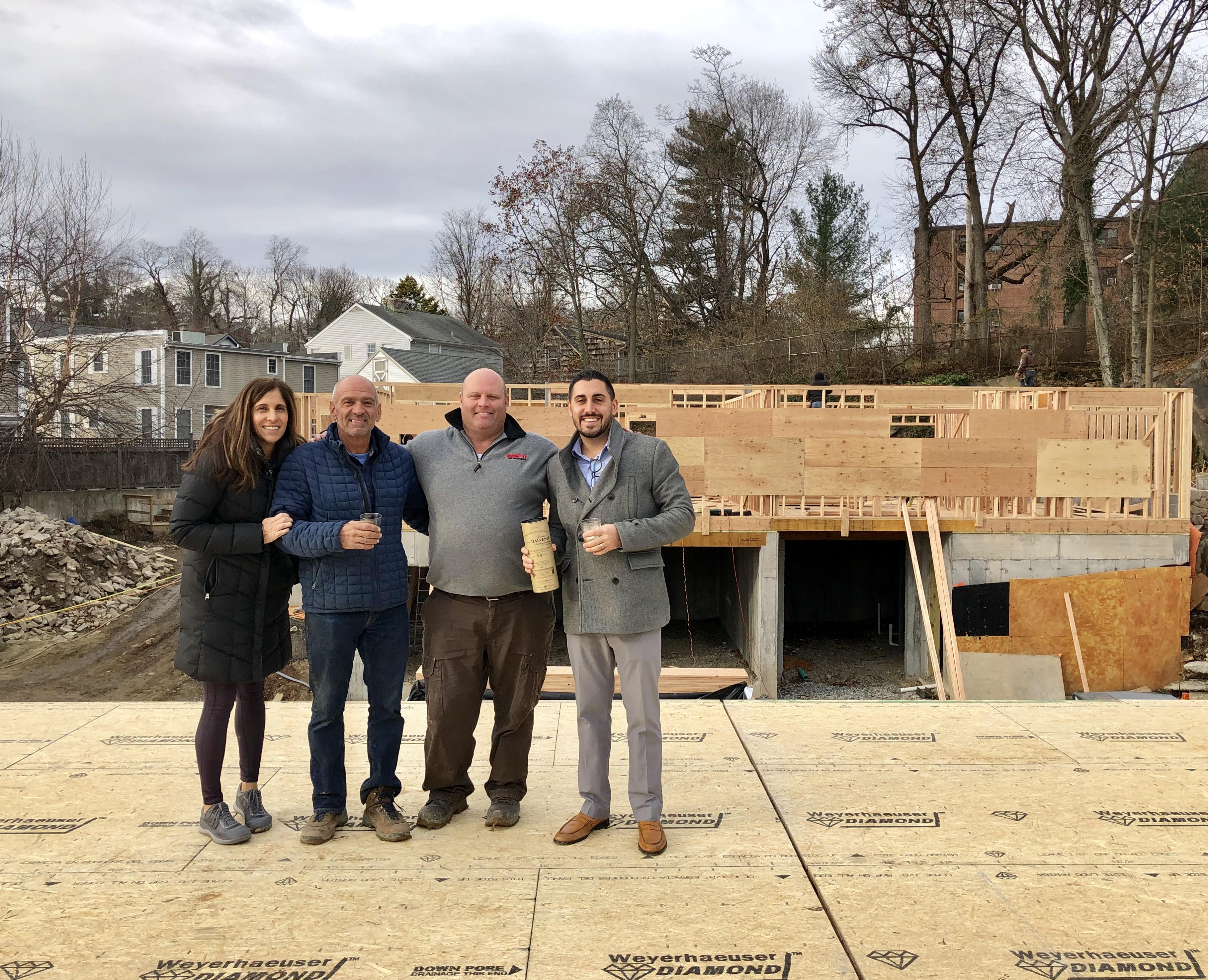 Tony, who grew up around the corner from Bruce Park Ave at 301 Davis Avenue, said he is attached to the neighborhood.

In fact, he said both he and his father were born in the house on Davis Ave.

“My grandparents came from Sicily in the 1920s and rented the house on Davis Ave. In the 1950s they bought it for $17,000, and three years ago I bought it, tore it down and built town houses.”

Rosemarie, whose maiden name is Vitiello, said her parents also came to the US from Italy.

“They landed in the Bronx and made their way to Greenwich and ran DaVinci’s Restaurant on Greenwich Avenue for 40 years,” she said of the restaurant that was a favorite of many longtime Greenwich residents. “That was the original DaVinci’s. There were also DaVinci’s in Glenville and Cos Cob.”

“All of us live here. We all went to Greenwich High School. We all care for the Town,” said Tony of Rosemarie, Anthony and Mike and Cecilie Jedlicka. “We’re not here today and gone tomorrow.”

“We’ve done 11 units together in Greenwich – five are completed and six are in progress,” Tony said.

Mike said that like Tony, his family lived on Davis Ave when he was a young boy, but they moved to Glenville before he started kindergarten.

He attended Greenwich Schools, including the “old new Glenville School” on Riversville Road, and graduated from Greenwich High School, where he met and later married his high school sweetheart Cecilie. The Jedlickas now live in Old Greenwich and have have three boys – two at GHS and one at Eastern Middle School.

“This is career 2.0 for me,” Mike said, adding that he has always been interested in construction. “My father owned a plumbing business and I grew up in Greenwich shadowing him on jobs, so I always had an interest in the big picture.”

And even though they had many mutual friends, Tony and Mike, who are ten years apart, didn’t connect until recently.

“Tony built my best friend’s house and did a great job,” Mike said. “I was beginning to unwind my oil career and wanted another investment vehicle. We built our first spec house together we developed a bond. So we formed a partnership and decided to scale it.”

Combined projects of Longo Construction Management and Catalyst Construction that are in progress include the four at Bruce Park Ave and two at 73 Orchard Place.

The town homes at 257 Bruce Park Ave will be completed in a few months.