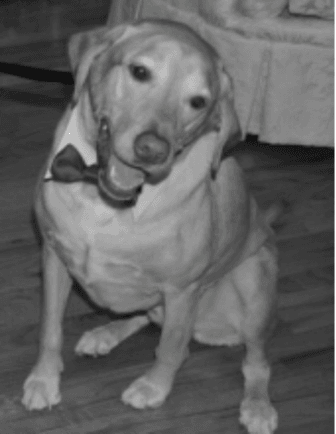 Oliver North Graziano, aka “Kugle Dog” and “Moose,” broke the heart of his human family on July 27, 2018, when he closed his eyes and left this life. He was 104 years old.

Oliver was a beautiful creature, a yellow Lab/Vizsla mix. He was the gentlest, sweetest dog and intelligent beyond belief.

He came to us as a pup and quickly became part of our family. We nursed him through broken femurs and he did the same for us on many occasions.

He was graceful and poetic in his gallop around the yard of which he never tired. A noble snout and warm inviting eyes communicated all you needed to know about his nature. He was love personified.

As grandchildren came along his duties increased. He was patient, never angered as they hugged and tugged him. He returned those hugs with wet licks from his considerable tongue. He watched over them as a doting grandparent. He’d follow and bark to warn us if he sensed danger.

Did I say intelligent?

He had an internal clock, that told him when to eat his main meals. And he’d let us know in case our clock wasn’t working.

Oliver’s favorite food was anything within his considerable reach. He stood tall on his hind legs to reach shrimp, sopersata, cheese, bread or anything on the kitchen counter.

A discernable palate, he once removed hot peppers from a sandwich I made and left unattended. Then he ate it. He would find the pill hidden in his food and place it alongside the bowl.

Did I say smart?

The staple of his diet was chicken cooked specially for him each day by his mother. Over fourteen years he consumed tons of chicken, with intermittent treats of cookies and snacks of which he insisted. Oliver had an insatiable appetite.

In later years Oliver wintered in South West Florida. The long drive was always a challenge. The drive was necessary because he was too big for the plane. He knew exactly where he was headed when we loaded him in the car packed with luggage. He’d inhale a flapjack from McDonald’s along the way and wait for a clean sheet to be put on the hotel bed before he’d jump on it.

Did I mention fussy?

In Florida he enjoyed going each day to the dog park to meet friends, chit chat, play ball. He was the “mayor” of the dog park, indeed of the community. Everyone knew and waited for Ollie. He would stop in the street to let people catch up, so he could say hello.

He’d investigate every passing car to see if he knew the occupants. I swear he’d recognize our son or daughter’s car from a distance as they pull into the driveway and hurry to get back home to greet them.

His favorite mode of transportation was my small convertible. He’d sit up tall in the back seat. I’d drive and watch him through the rear-view mirror, his ears flapping in the wind. I’d catch him staring back at me, letting me know, life was good. And it was, with him.

Ollie loved sitting on the lanai. He’d jump on a lounge chair and stare at birds as they flew over, or the fountains in the distance, then to me with a nod, again to say, life is good.

Exchanging glances with him revealed a human quality hard to explain. He was a strong, determined dog that worked through torn ACL’s, and crippling arthritis until his legs could no longer carry him.

At this time, life is not good for us. Oliver passing has left a hole in our hearts, a void never to be filled. It is an indescribable anguish to be left with only his memory now, everywhere we look, his memory. His indominable spirit and character made it all the more painful for us to say good-bye and we will second guess our decision forever. I only hope he knew, even in those last moments as he closed his eyes, that we loved him. Our life will never be the same. He filled our life with joy and purpose beyond anything we could have imagined.