They do it under the cloak of darkness. The bold ones do it in the bright light of day.

On Saturday, about a dozen residents in western Greenwich organized their own trash pickup to parallel the Townwide Cleanup event organized by Greenwich Green & Clean.

A dozen members of the Pemberwick-Glenville Association met at Castle View Deli just as the sun turned the heat up to broil along the banks of the Byram River at Caroline Place.

The Pemberwick and Glenville residents described the debris collection event as the first in a series of planned projects for their burgeoning neighborhood association.

Along with their youngest volunteer, 13-year-old Caitlin Curtis, a 8th grader from Western Middle School, the residents pulled all manner of yard waste, litter and a few antiques from the slippery slopes of what is otherwise a beauty spot in western Greenwich. 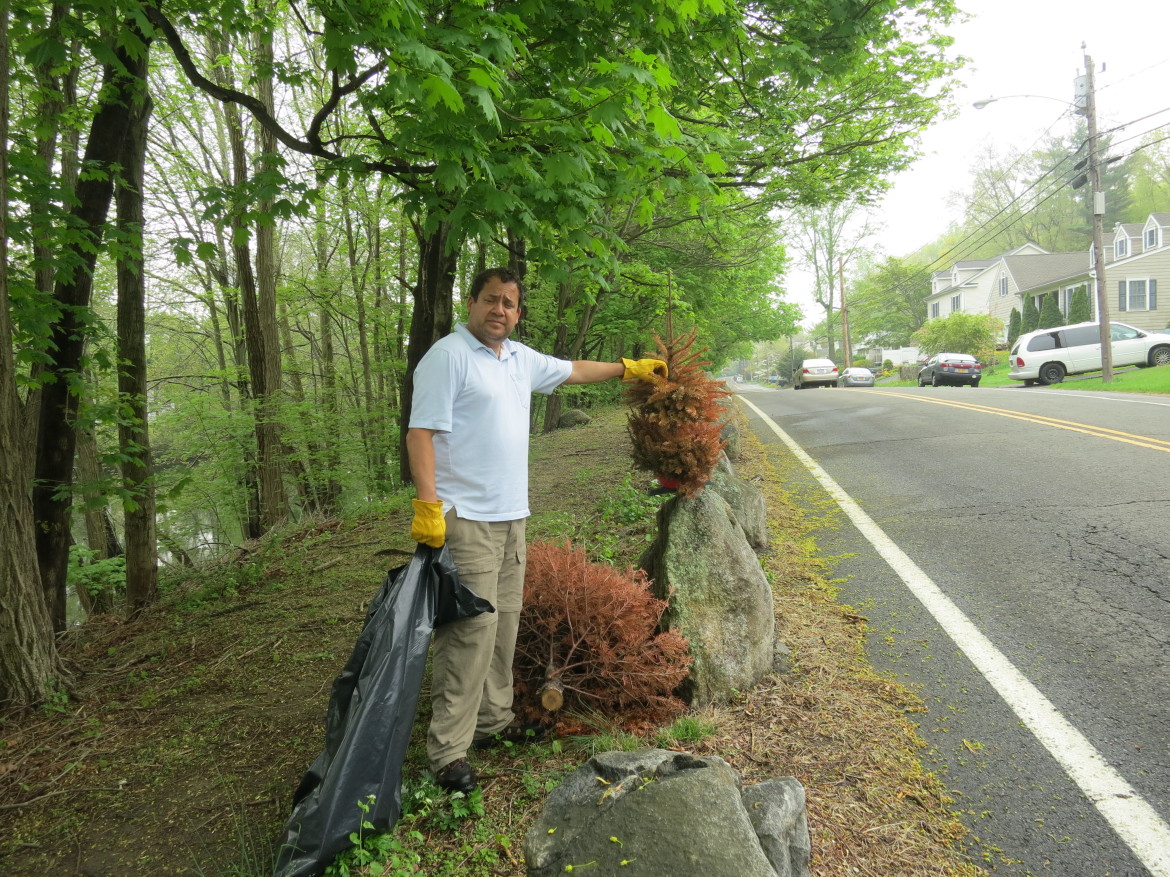 Moments after Philip Petrone dragged these Christmas trees up the riverbank along Caroline Place, Vince DeMarco pulled a wreath from the muck. Credit: Leslie Yager

Reached by phone May Hull, longtime director of Greenwich Green & Clean, a non-profit that works closely with the Town, said she would have liked to work more closely with the group. Hull’s office is located in Pemberwick Park, on the other side of the river from where the volunteers were busy cleaning.

“We should not be working separately,” Hull said, noting that she works under the auspices of the Town and therefore volunteers for her group are covered by the Town’s insurance.

Hull said that she oversaw cleanups along the riverbank of Caroline Place “ten or twelve times in the last two years.” She said volunteer groups have included students from GCDS, Greenwich Academy, Stanwich School and other private schools who have more flexibility on field trip scheduling than public school students. She also escorts students from ARCH School and multiple Scout groups, providing them supervision as well as gloves and bags. 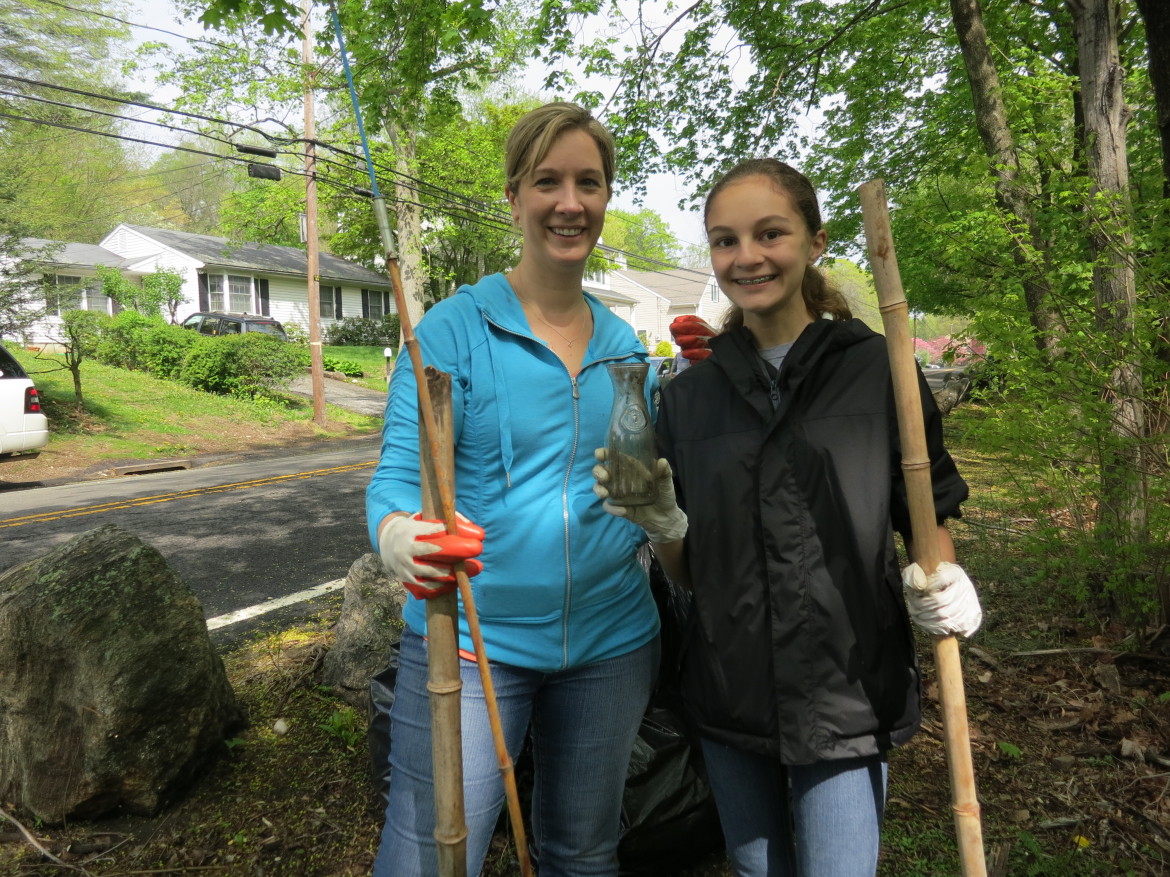 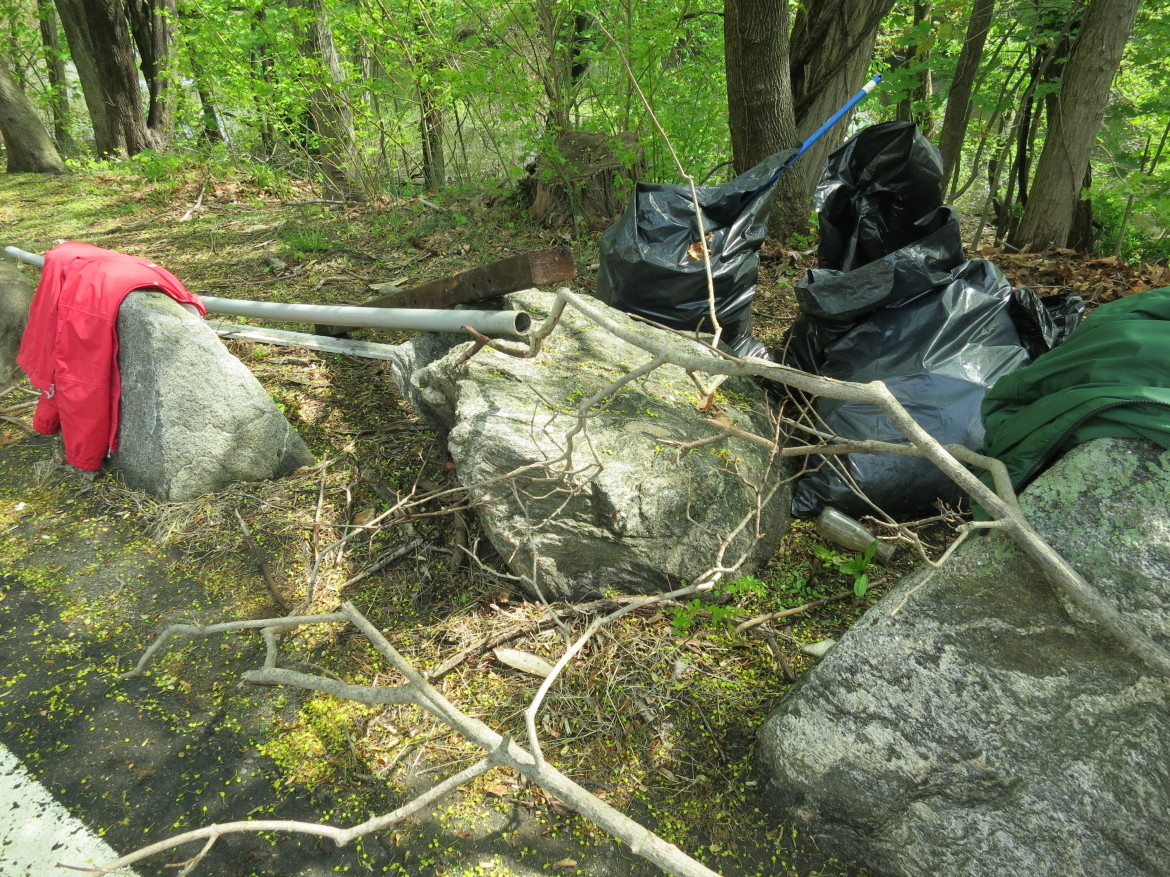 Indeed, on Saturday, Andrea Blume, armed with gloves and a trash bag at Caroline Place, pointed to a “no dumping” sign. Just underneath it was a pile of yard waste. From the pile emerged a single blooming tulip. 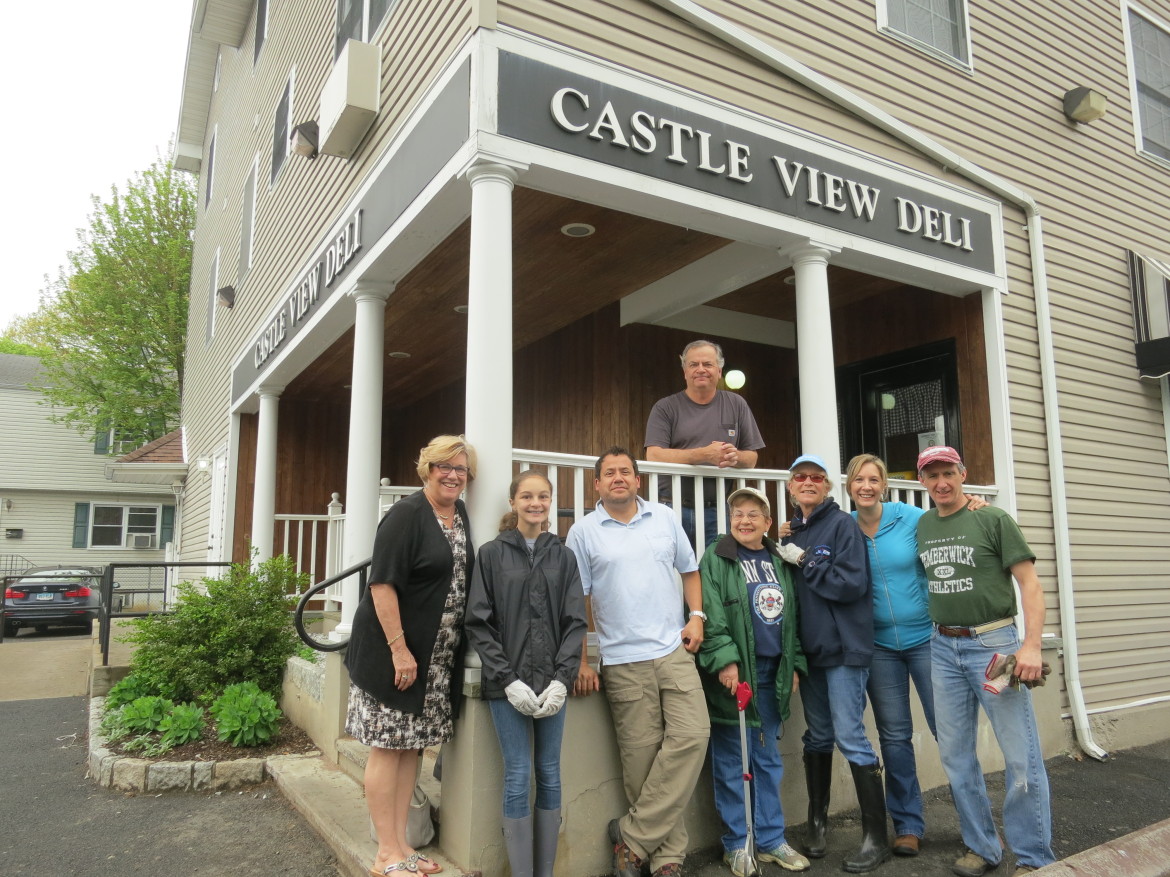 Vince DeMarco, of the Pemberwick-Glenville Association, described the ambiguous nature of the Caroline Pond area in particular, which encompasses more than one voting district and a nebulous boundary between Pemberwick and Glenville, which Andrea Blume said is sometimes referred to as “Glennick.” 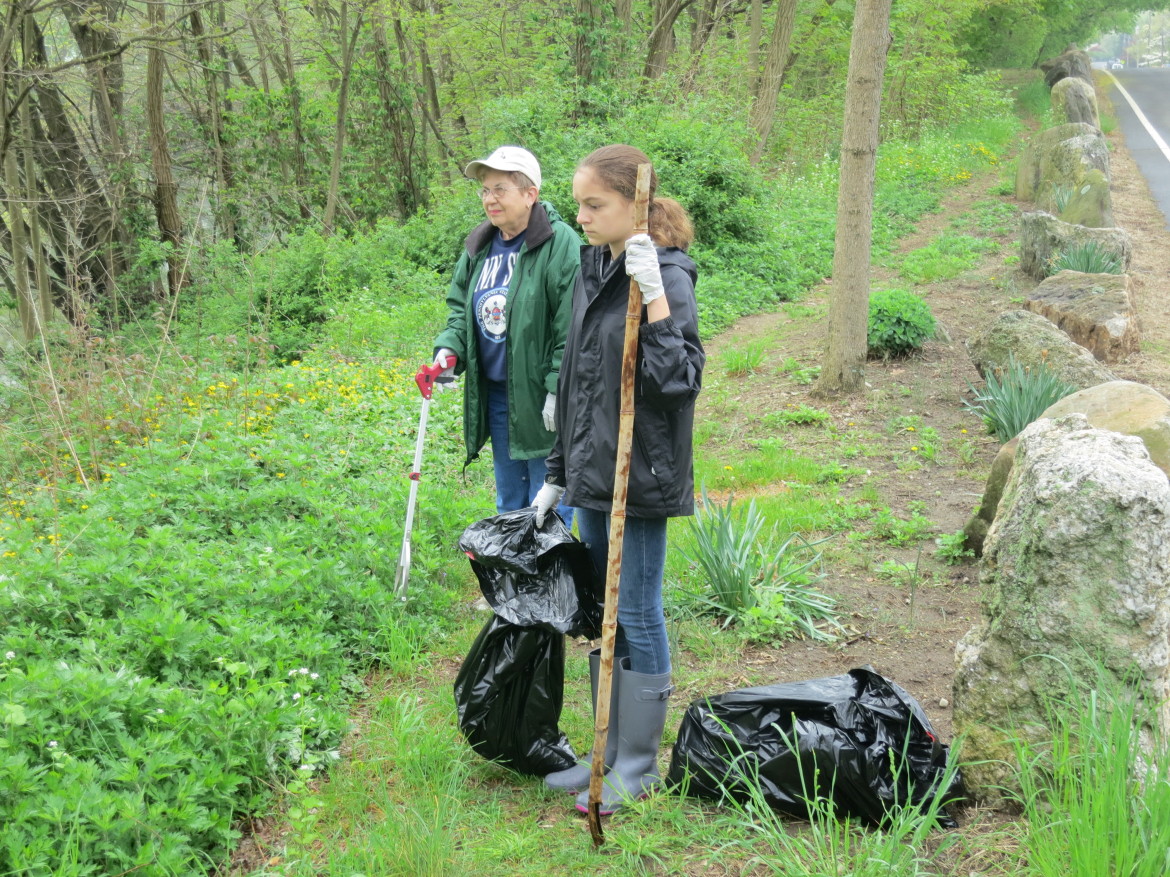 Hull agreed it is disappointing that so many people dump litter and even household items in the river and down the embankment. She said the culprits are often landscapers who finish work after Holly Hill is closed for the day and prefer to start the morning with a clean truck.

What’s more, the residents with the best views of the Byram River — those at the end of Rex St and Lucy St, for example — describe spotting disparate items in the river ranging from a car bumper, to an air conditioner and even an entire tree floating in the water.

Eva Spelman has gone so far as to paddle out in her kayak to pull objects out of the river.

Looking at the GIS database, the property lines for homes on the east side of Caroline Pond extend into the water. Whereas Caroline Place residents’ homes are separated the the roadway from the riverbank, which belongs to the Town.

Michael Chambers, director of the Inland Wetlands and Watercourses Dept at Town Hall said it’s not illegal for residents to paddle out to retrieve debris from the river, but that they should leave word with his department to let them know what they’re doing.

Hull said that residents from all parts of Town are encouraged to send word of “trashy places” to Green & Clean by phone (203) 531-0006 or email at [email protected] She said that when townspeople alert her to problem spots, she, in turn, will contact  the Town’s Highway Department. “If there’s a dead rat in the middle of the road, it’ll be gone,” she said. Still, she said there is no way that DPW has the time for every single piece of Town property, but that they do pick up along the sides of the roads and that a “sweep” is planned for this summer.

Commissioner of Public Works, Amy Siebert, said in an email, “We have 265 miles of roads, and about 50 Highway folks to deploy to address not only cleanup but sidewalk maintenance, pothole patching, asphalt paving, storm drain/catch basin cleaning, mowing, street sweeping, leaf pickup, other roadway infrastructure repair, etc.,” she said. “And of course, we have crews out doing projects, so we don’t have all these staff available to do nothing more than litter patrol and cleanup.”

More information about the Pemberwick-Glenville Association is available online.