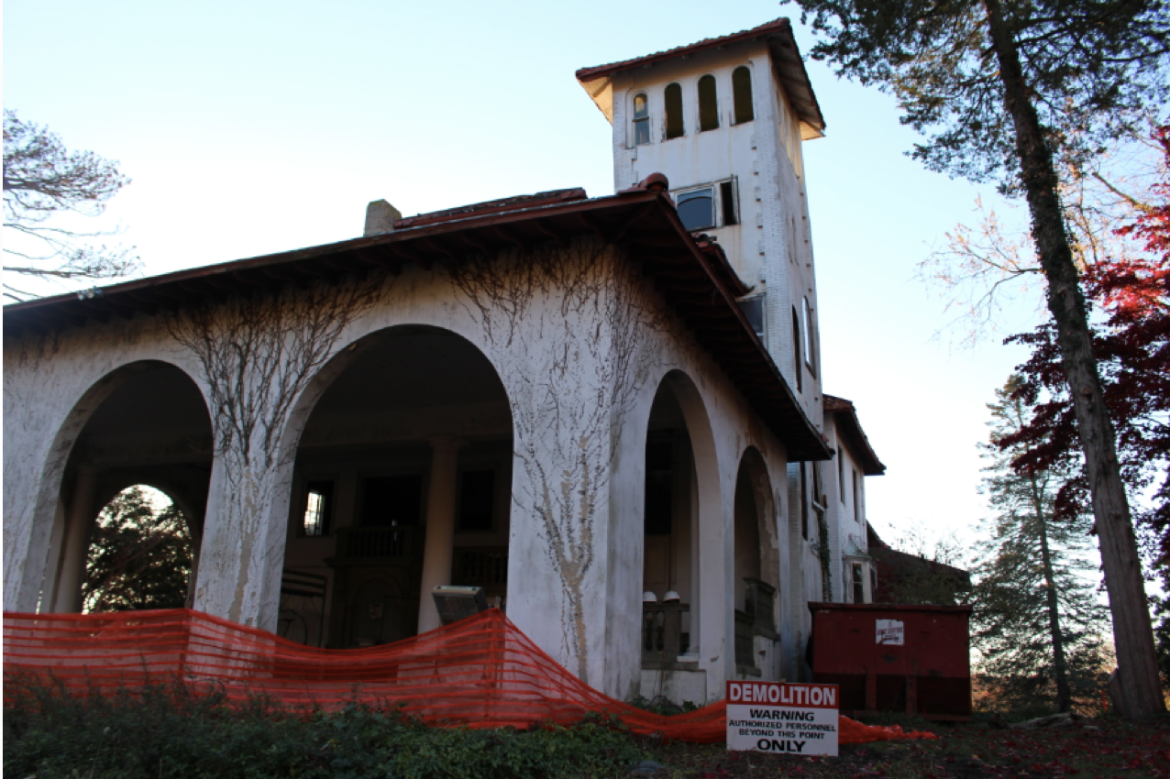 Yet after a lengthy presentation from engineer Mr. D’Andrea and attorney Chip Haslun, the commission declined to take a vote, leaving the application open so the applicant can address outstanding issues. Most of the questions for follow-up relate to grading, drainage, basins and detention basins, as well as sewer capacity.

Known by neighbors as “The Castle,” the mansion had fallen into disrepair and was priced for the value of its land — around $6.3 million.  A concrete lined pool that was part of the original estate, and was adjacent to Gary Dell’Abate’s property, was removed last fall. 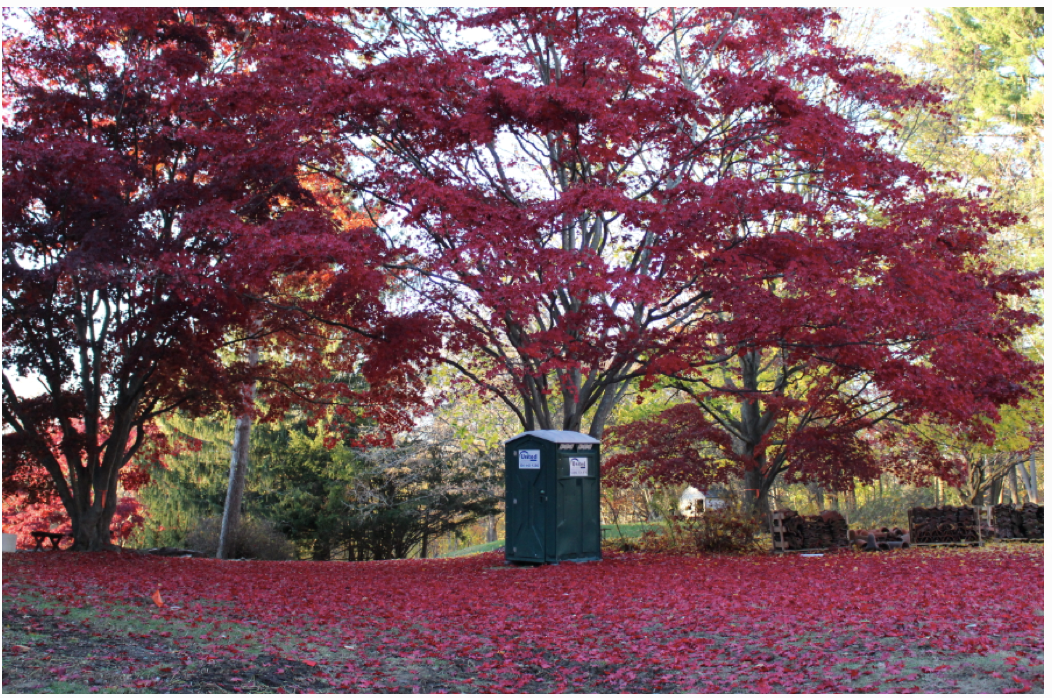 Trees the Planning and Zoning Commission hope will be preserved when the former Buena Vista property is subdivided for 6 homes. Credit: Leslie Yager

Mr. Haslun said that the application seeks to subdivide the property into six lots, though he said under existing regulations, eight lots would have been possible. Haslun said the applicant had met with the Historic District Commission who he said agreed with the applicant that nothing that could be saved of the original house.

D’Andrea said the developer intends to build two homes at a time, building from the north to the south so that he doesn’t have to drive past the completed homes before starting the next.

There’s a lot of open area. There’s a tremendous amount of open space at the end of the day,” Mr. D’Andrea said.

Mrs. Alban said the Conservation Commission had raised questions about whether several trees of large caliper could be saved, including a Norwegian Spruce and a Japanese Maple that Mrs. Alban described as “a gorgeous, gorgeous tree,” and some “substantial” Spruce trees.

Mr. D’Andrea said they would keep trees that don’t conflict with the driveways, and would attempt to keep the Maple and 30″ Pine trees along Hillcrest. “We’ve identified all the large trees along the street. It is beneficial to the developer and the appearance of the neighborhood, so everyone is in favor of that,” D’Andrea said.

As for the old stone wall along Palmer Hill, Mr. D’Andrea said, “We’re going to retain most of it and replace a piece of it because some of it will necessarily be moved to accommodate the entrance into lot no. 1.”

“These are modest homes,” Mr. D’Andrea said. “They’re not going to be homes based on our client’s development plan that would be possible on these lots. Because it doesn’t fit with the rest of the neighborhood.”

In a discussion about open space and wetlands on the property, Mr. Maitland said, “The open space is a funny shape. It’s not a strong rectangular shape,” he said, adding, “I think there are so many open questions, you could look at that.”

“What’s to prevent someone 10 years from now from doing something within that green space,” Mrs. DeLuca asked. “How do you reconcile future impacts on that area and how that would impact the detention basin?” 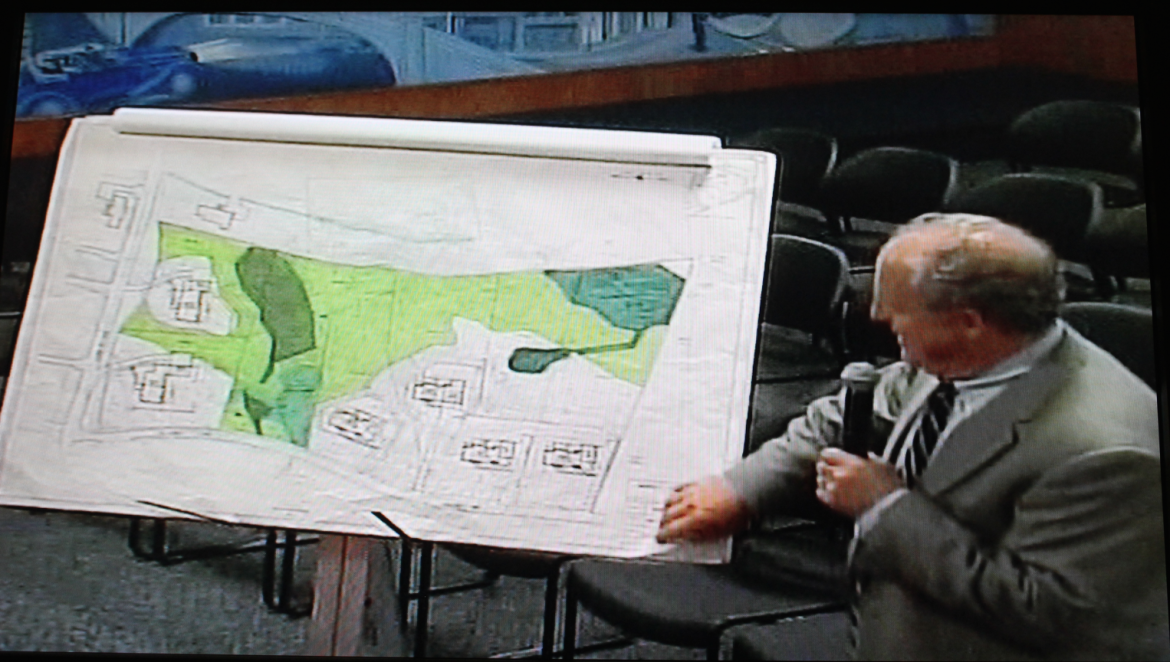 See also: PHOTOS: What’s Next for the Wrecking Ball in Greenwich? Buena Vista in Hillcrest Park