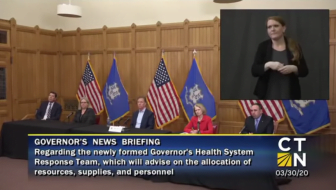 On Monday afternoon Governor Lamont appeared in a televised news briefing on COVID-19 with his health system response team.

Lamont said New Haven County is catching up quickly with Fairfield County in terms of where new cases are being added at the fastest rate.

Governor Lamont while the New York area had been the focus of national attention, there are outbreaks in others areas in the country, including some sparsely populated ones.

He said New Orleans became an unexpected hot spot and Louisiana Governor John Bel Edwards speculated that Mardi Gras had to do with the transmission.

He said Colorado’s pace may have accelerated its pace of infections because tourists from around the world head there to ski.

Even in rural areas of Montana there are areas with high infection rates despite not being heavily populated.

In Connecticut as of 7:00pm on Monday: an additional 578 Connecticut residents have tested positive for COVID-19, bringing the statewide total to 2,571.

517 people have been hospitalized in Connecticut due to complications of COVID-19, and there are 36 fatalities to date.

Lamont said Southern Connecticut is reaching closer to capacity, and is at the top of the priority list along with New York and New Jersey for PPE and ventilators.

He said he was pleased President Trump extended social distancing guidelines by a month. “It’s so important we speak with one voice,” he said.

The Governor said Connecticut received a small delivery of PPE from the federal government: 111,000 N95 masks and 146,000 surgical masks were delivered, and there is “a promise” of 50 ventilators.

He said to date, about 2,000 retired nurses and people with health care backgrounds have come forward to volunteer, and there is good support form the Army Corps of Engineers and FEMA who have been touring facilities across the state to see where more beds could be added, including the field house at Southern Connecticut State University, and the O’Neill Center at Western Connecticut State University.

Jennifer Jackson said the state has an able health care system but, she said it is important to keep demand down by abiding by social distancing and hand washing.

“The point is not to overwhelm the system,” Jackson said. “We plan for the  worst. Hospitals are being very creative and have already increased capacity considerably, and other spaces are being identified.”

Jackson said that lower Fairfield County hospitals – in particular Greenwich, Stamford, and Norwalk Hospitals – are most impacted by COVID-19 as a percentage of their total patient population.

“We have to be ready to take care of COVID-19 positive patients to the best of our ability, and take care of other patients including cancer patients who need to continue chemotherapy and radiation therapy treatments,” she said. “We’ve done a lot of work to empty out our hospitals and ambulatory clinics to create capacity to be ready to treat these patients.”

Asked about Norwalk Hospital having been described as a war zone by a physician there, Dr. John Murphy replied, “There are more patients, more sicker patients and some staff have been furloughed or who themselves are unwell at home. So you have a thinner team and a degree of anxiety. They are walking into an environment where they themselves could get sick,” he said. “It isn’t a war zone, but it is a stressful, complex, ever changing environment.”

“I can’t do that, I have hundreds of roads coming into the state,” he said. “But the sentiment is the same. If you can, stay home. If you absolutely have to on essential travel, make sure  you self quarantine, and your neighbors will be looking out for that. It’s the moral imperative. It’s the right thing to do.”

Marna Borgstrom of Yale New Haven Health said as of Monday morning Greenwich Hospital had between 85 to 90 COVID-19 positive patients, which she said was “pretty significant for a hospital of that size.”

Borgstrom said Greenwich is a logical place to follow patterns out of New York.

“A number of patients are intubated. They’re creating capacity, working with Stamford Hospital. They’re going to take the Tully Center, owned by Stamford Healthcare, which has been mothballed, and turn it into a respite care, post acute care for both Stamford and Greenwich,” she said. “The staff there is managing a very difficult situation with incredible grace and skill….Greenwich, Norwalk and Stamford are on the front line, but there is a cohort in New Haven.”

In New Haven, she said the top three floors of Smilow Cancer Hospital, which are negative pressure rooms, have been emptied out to create additional intensive care unit capacity.