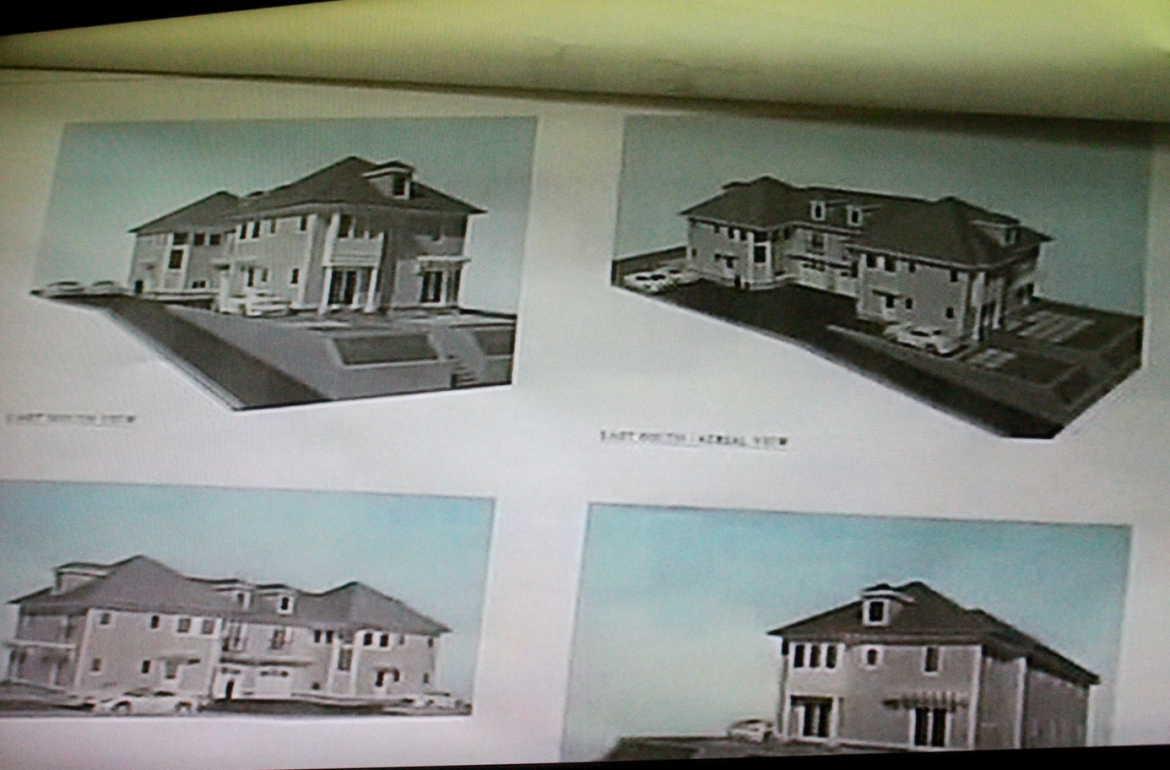 On Dec. 8, an updated rendering of proposed buildings reflected the creating of a front door facing Milbank Ave. 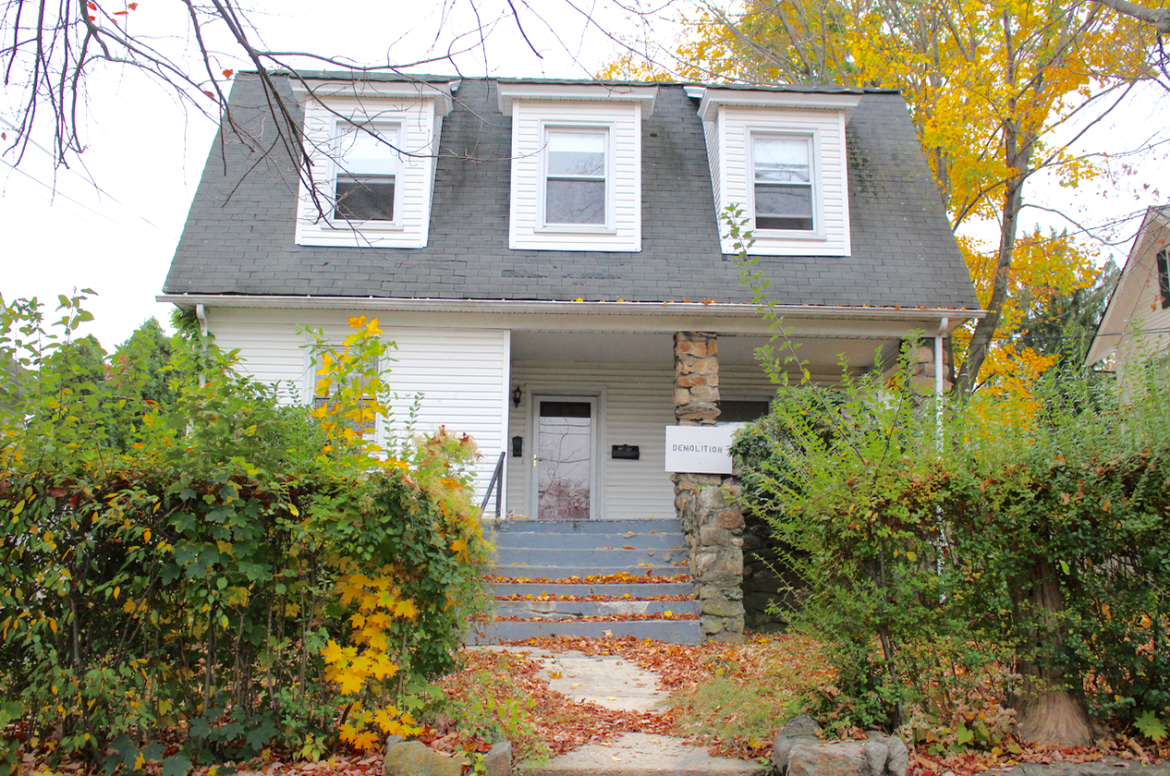 Despite a passionate debate about whether it was their prerogative to consider an application’s impact on a century old streetscape on upper Milbank Ave, the Planning & Zoning commission voted 4 to 1 to approve a final site plan and special permit to demolish a 1910 two-family house at 80 Milbank and replace it with “double-sideways” houses.

Back on Nov. 10, when Popi Nikas, represented by attorney Thomas Heagney, first presented his an application, the commission voiced issues with sewer laterals, parking and the streetscape.

Particularly, there were members who objected to the two units being oriented entirely sideways. 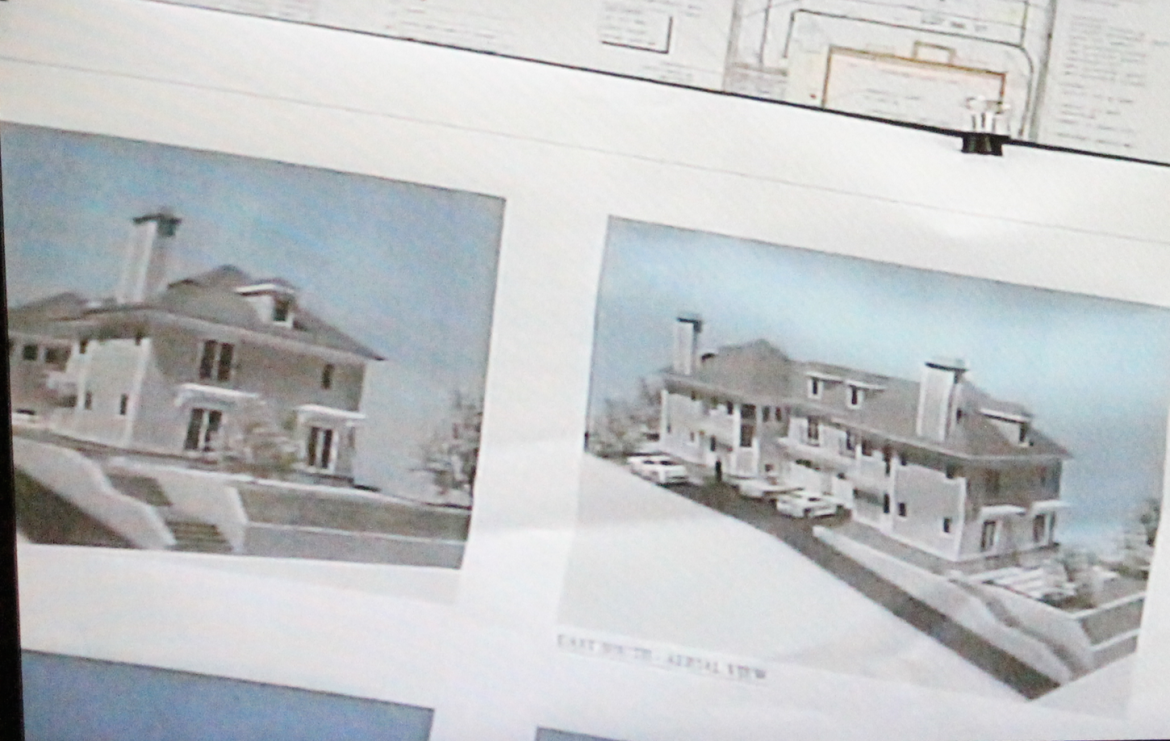 By Dec. 8, the application was updated in terms of proposed parking, sewer lateral and streetscape.

“We have revised the plan to show 3 surface parking spaces and 2 garage spaces to meet requirements for the two family home we’re proposing,” Attorney Heagney said, adding that the project’s engineer Tony D’Andrea revised his plan to show two sewer laterals instead of just one.

“As part of reducing the footprint of the building on the south side and removing the fireplaces, on the south side, we’ve been able to make the parking deeper,” Heagney explained. The two-bay area is deeper, allowing for greater movement and and ability of residents to back out both from the garages and from the unit closer to Milbank Ave.

“What I’m more concerned about is the parking space in the front. That’s really tight,” said Richard Maitland. “It’s built on top of a retaining wall. And that retaining wall is almost 6 ft above the roadway.”

“Six ft is not a good number for us,” Maitland continued. “And it’s a safety issue of driving and parking up there. There’s no railing around it…. It’s like going to an auto showroom…You’re going to have to do something to convince us it is safe.”

“We can certainly can have a railing put in there,” Heagney offered.

Attorney Heagney said that, reflecting the wishes of P&Z that rose from the Nov. 11 meeting, the applicant had made changes to the facade that faces Milbank. 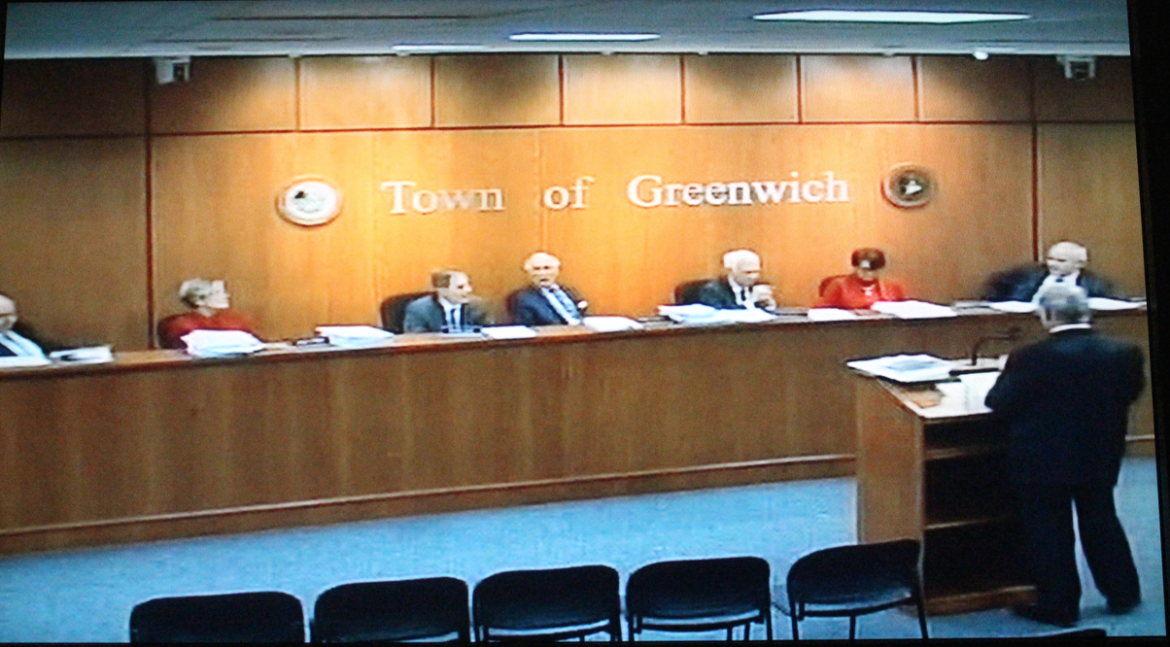 Thomas Heagney explains his client’s applicaiton to the Planning & Zoning Commission on Dec. 8, 2015

“There is something very awkward, and perhaps unsightly about it,” Mr. Levy said.

Mr. Macri, who is still an alternate member on the commission, addressed the front facade specifically.

“I appreciate what the design team has done, moving the stair around. But I still believe there is more effort that can be applied to this,” Macri said. “The homes on this block are predominantly of a hip roof nature. You have a band of windows and a porch structure on the front. You’ve got a vertical element that alludes to a front door.”

Macri asked if the applicant would create some type of porch and roof structure more in keeping with the streetscape.

At that suggestion the applicant’s attorney balked. “We have no ARC review with two family houses. We don’t have contextual zoning either,” he said. “You don’t have to design something in context with the rest of the neighborhood.”

“I walked the neighborhood and found six houses between Lenox and East Elm Street with no street entrance or street presence at all,” Heagney continued. “Some of them have been around for a long time. I found six with enclosed porches where at one point there had been a front porch. The horse is out of the barn,” he said.

“How can I figure out what kind of front door do you want,” Heagney asked, raising his voice.

“Nobody is telling you what type of front type of door to pick. We’re talking about a facade that is consistent with the street,” Mrs. Alban said.

“I think it is an improvement, but we must address the streetscape,” Mr. Levy said.

“More can be done,” Mr. Macri said. “I believe what’s happened previously is something that we should be moving away from. We’re allowing our streetscape and character to be lost. This would be the first step, and we need to start to look at this in depth and detail.”

When Mr. Heagney made the suggestion that the commission add a regulation toward that end, Mr. Heller tried to shut down the discussion.

“We’re not in the business of personal taste,” Mr. Heller said.

“Aren’t we in the business of protecting the character of our town?” Mr. Macri asked.

“I think it’s up to the commission to change its process,” Mr. Fox said. “Do we want more form-based code. We need to change our regulation for the process.”

“We’re not in the business of personal taste,” Heller said again.

A motion was made to approve the special permit and final site plan with the condition that the applicant add a railing to make safe the parking spot on top of the retaining wall. The  application was approved in a vote of 4-1 (Maitland, Heller, Fox and Levy in favor, with Alban opposed).

The Commissioners who voted affirmatively said they believed the applicant had taken acceptable measures to address the streetscape concerns raised at previous meeting.

What’s Next for the Wrecking Ball in Greenwich? 1910 Home Across from Observatory