Maybe it was the show of force from the neighbors who numbered about 20. Maybe it was scathing commentary from Aleksandra Moch, Environmental Analyst for Town of Greenwich.

In the end, Chris Bristol, lawyer for the applicant, Rossana Colangelo, who seeks to build a house on a very steep slope on Westview Place, said right off the bat that his client would be willing to rework her proposal and return at a future meeting. 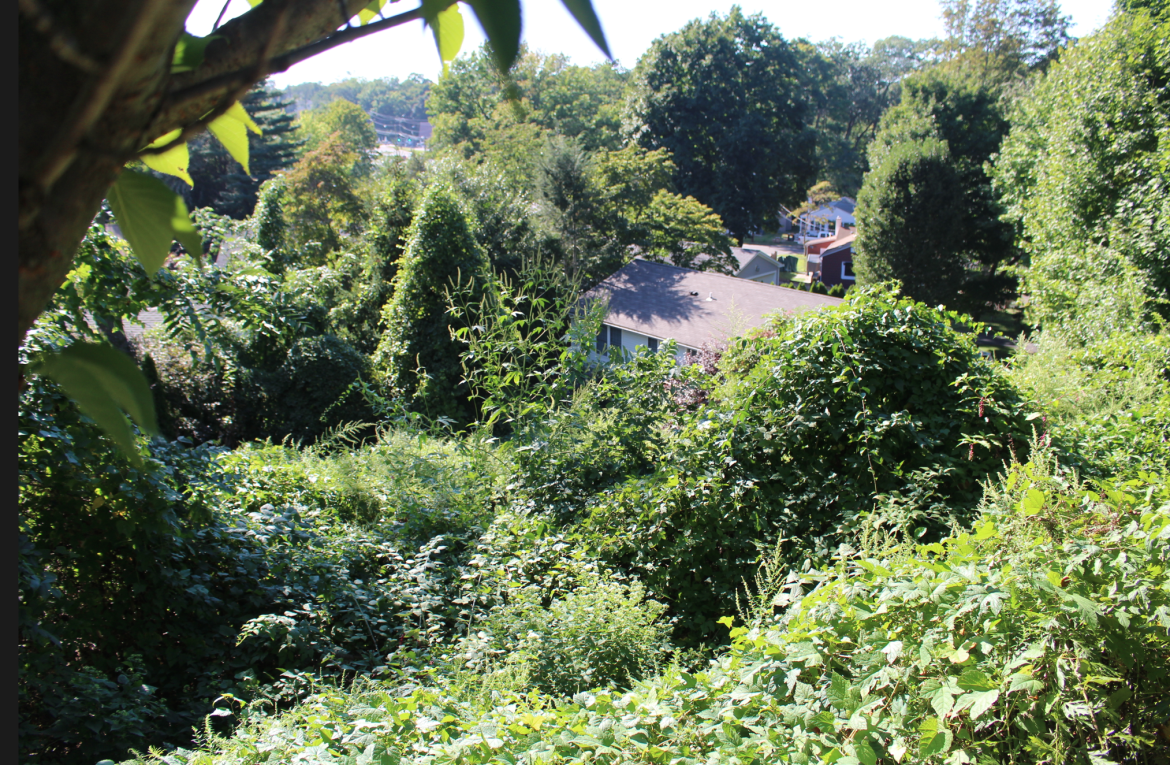 The view from Westview. Visible in photo are houses on Carey Drive and lights at intersection of East Putnam Ave and River Rd.. Credit: Leslie Yager

Ms. Colagelo seeks to construct a dwelling, driveway, pool, and associated retaining walls, installation of new storm drainage system sanitary sewer lateral and utility service connections on a vacant lot on Westview, the entrance of which is next to Balducci’s in Riverside.

If the application process is a negotiation, the opening bid was very high indeed. The existing lot is so steep that to walk it requires holding onto tree branches for balance. 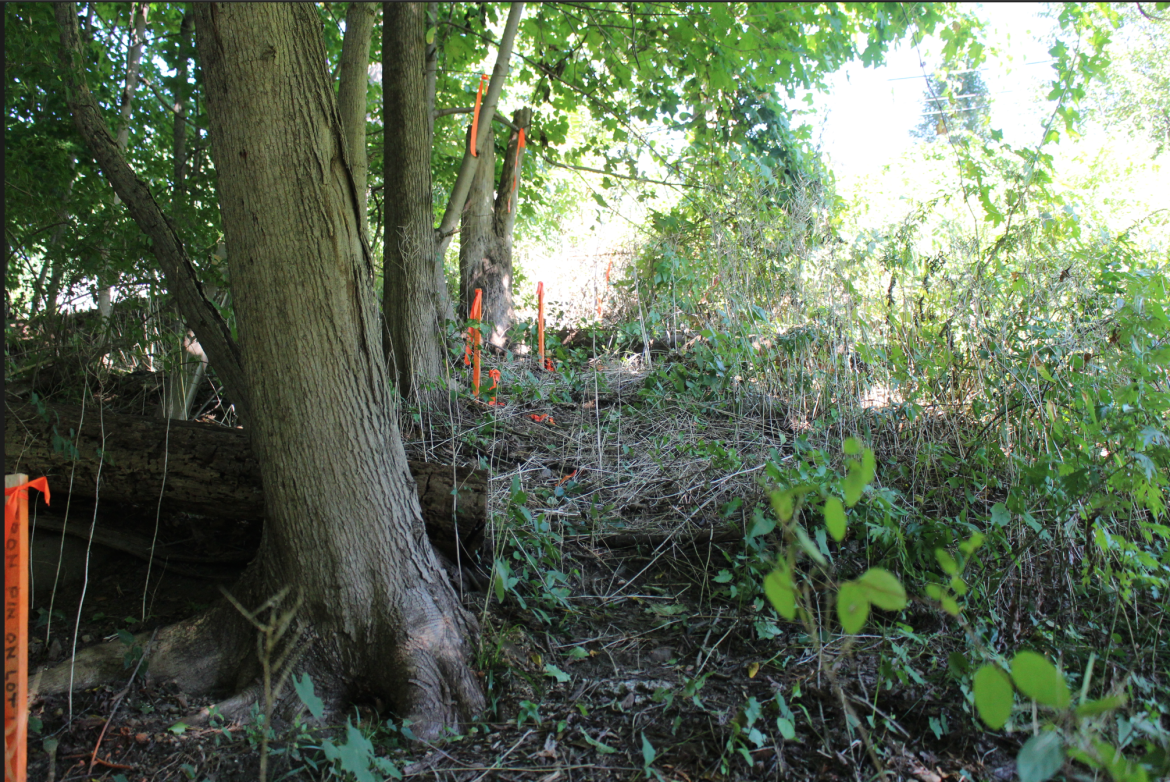 View of slope on Westview looking up. 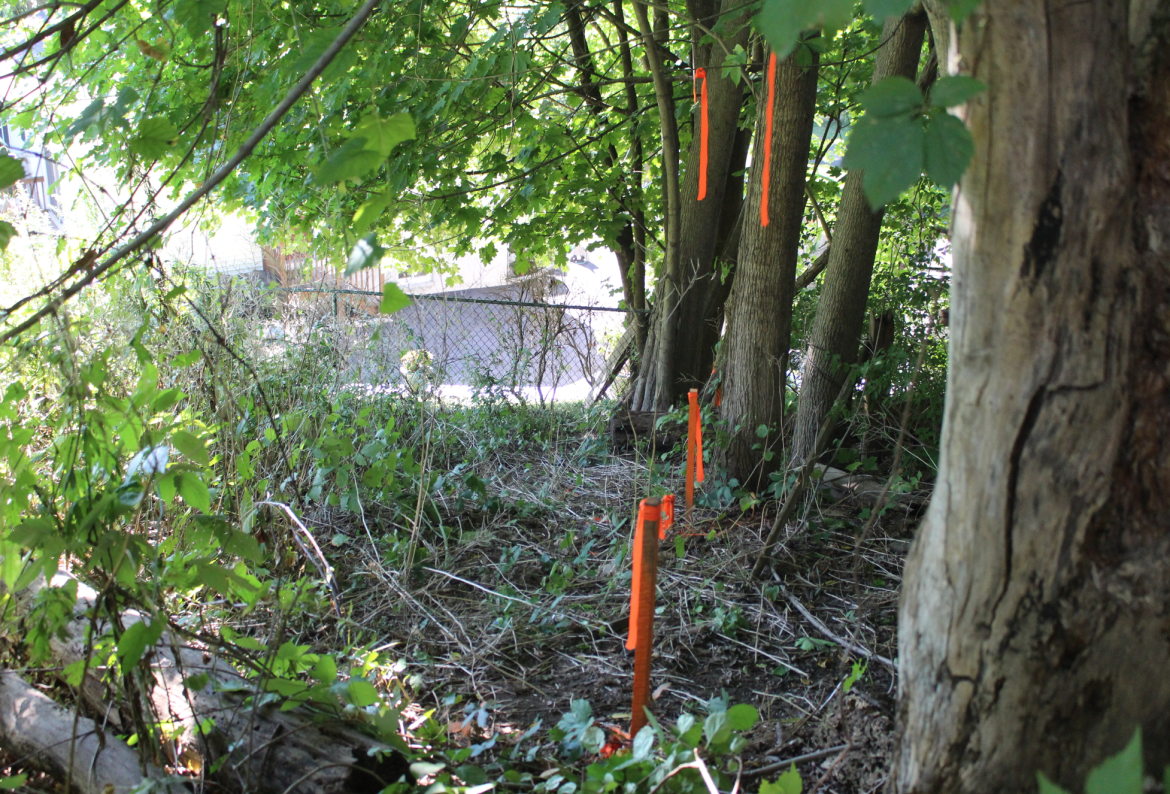 View of sloping lot on Westview looking down.

The proposal, which was discussed on Monday at an open staff meeting attended by teh applicant’s attorney. During the meeting commissioners and staff discussed the extreme manipulation of the lot, and the commission must consider disruptions the natural environment.

“They’re filling a mountain and making it flat,” commissioner Alban said on Monday.

“Nobody wants to have their bedrooms below,” Mr. Fox said.

The topographically challenged lot, should it be developed, would set a precedent for the rest of the land on the west side of the road. A metal safety guardrail runs along the steep side where Ms. Colagelo seeks to build her house.

Westview is a nonconforming road, as it is very narrow and comes to a dead end with no turnaround area for construction trucks, much less for snow plows or emergency vehicles. 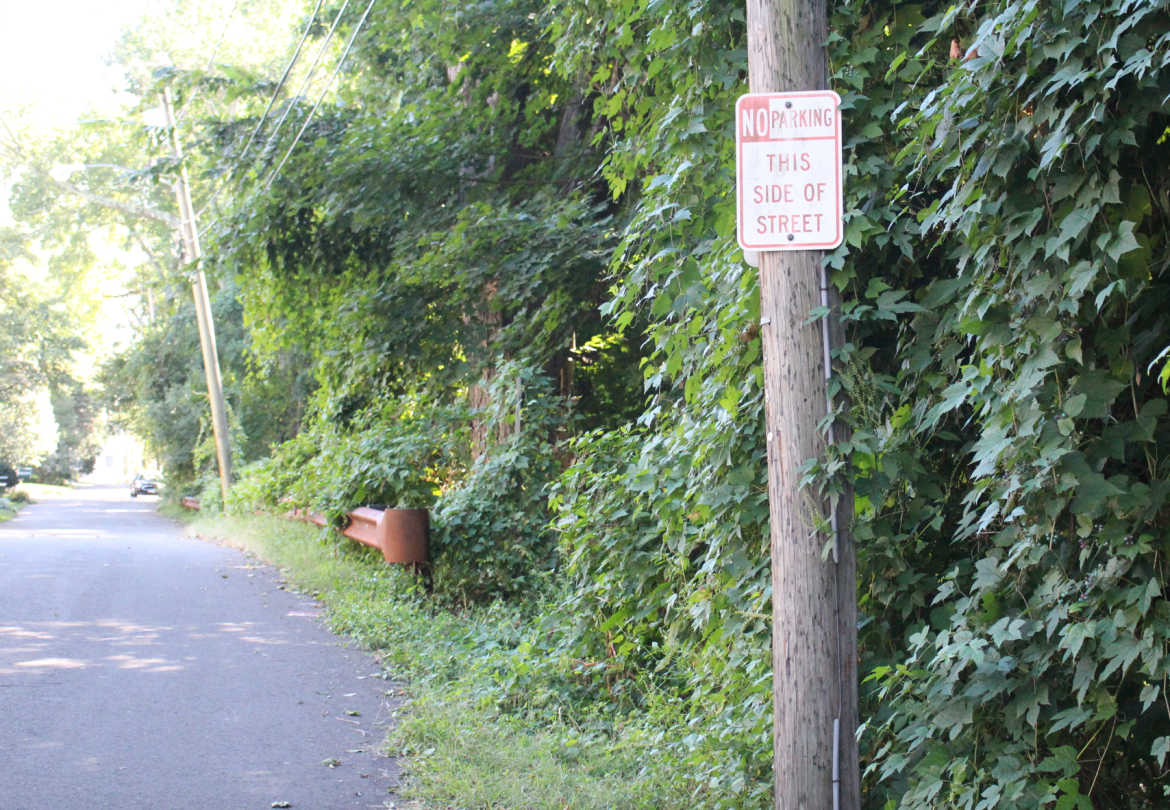 A guardrail runs along the steep lot at “0 Westview.”  Credit: Leslie Yager

The lot, which is being referred to as “0 Westview Place” and would be assigned a street number by the post office if it is developed, was referred to as an “upside down house” by P&Z members during their staff meeting. Comparisons of the proposed house were made to houses built on hillsides in Vail, Colorado or in California.

Concerns were raised on Monday about disturbing what is a stable slope. Specifically, once it is disturbed, it will impact drainage below. The streets below Westview are Cary Rd, Hines Lane and Fitch Lane. 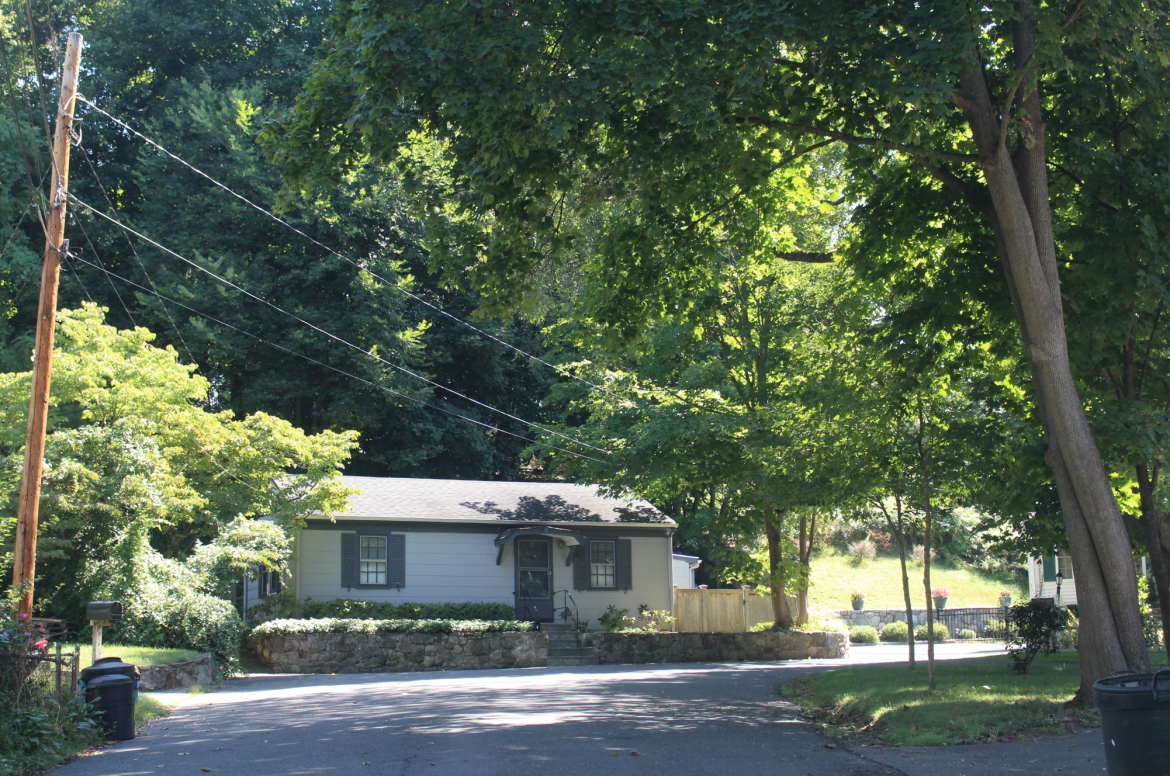 A house on Hines Lane at the foot of the steep slope where the applicant proposes to build retaining walls to accommodate a house and pool.

A letter from neighbor  at 50 Westview across from the proposed lot, expressed concern about storm drainage. “If a home is built across the street it will negatively impact my storm drainage system and create a serious risk of flooding,” wrote the owner of 50 Westview.

Ms. Moch’s report described the lot as naturally wooded, with ledge consisting of metamorphic mica schist and igneous granitic intrusions. The said the proposed single-family development would require extensive filling and installation of several stone retaining walls and pointed out that the Plan of Conservation and Development recognizes steep slopes as an important natural resource contributing to community character.

She said the retaining wall to the to the north and northwest proposed along the property lines, are “not only problematic during construction, but also any future access for maintenance could not be done without encroachments to the neighboring properties.” 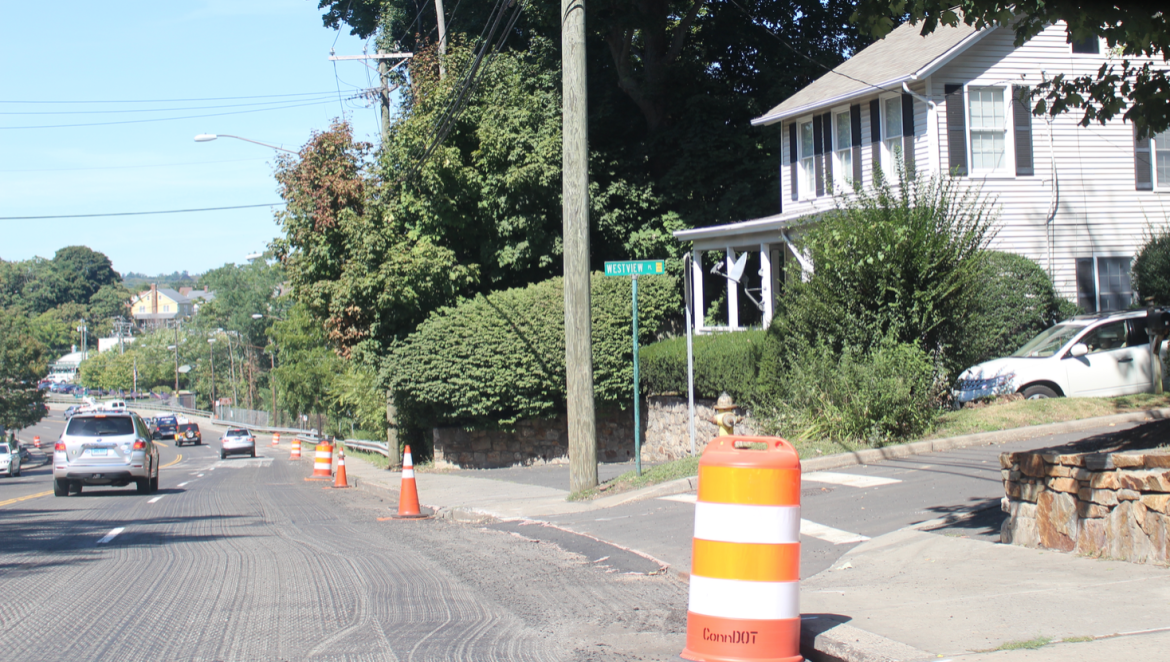 Ms. Moch expressed concern that at least 6 trees would be removed and others impacted along the perimeter, and that the applicant offered no mitigation for the loss of trees. Further more she pointed out that the proposed fill would cover almost 90% of the indigenous soil.

“This lost resource will be replaced with nutrient poor fill requiring an intensive use of fertilizers, herbicides, and irrigation,” Ms. Moch said. “To ensure that the fill would not cause site contamination, the imported material should be tested for heavy metal, arsenic, hydrocarbons, PCBs and other common contaminants.”

Ms. Moch’s recommendation was for the applicant to return with an alternate design. 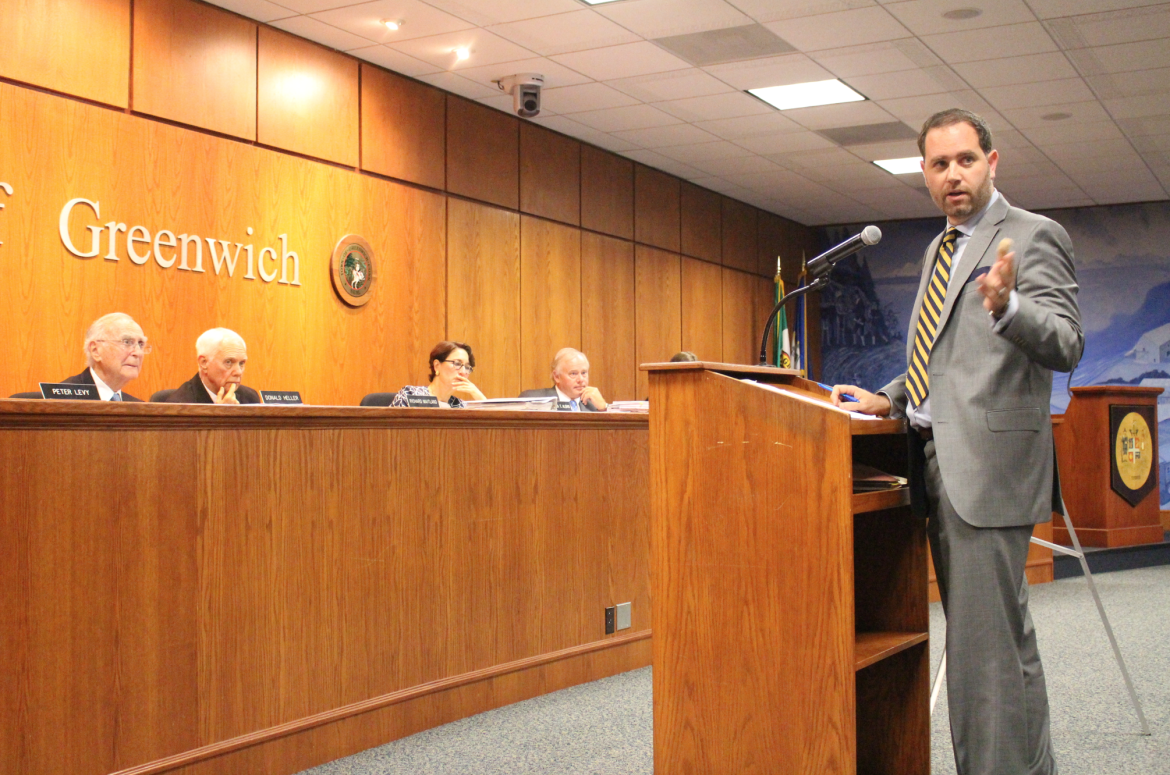 Mario Coppola, attorney from Berchem, Moses and Devlin, retained by neighbors who oppose the application, referred to a report by Trinkaus Engineering, who the neighbors retained as a third party expert.

Mr. Trinkaus’ report raised issues with the storm water management, and concluded that surface water would simply cascade over the top of the retaining walls, causing concern for property owners downslope. The Trinkaus report concluded that the proposal did not abide by the drainage manual, and the erosion control plan violated DEEP guidelines.

“He questions whether it is even feasible to construct some of the walls as proposed without adversely effecting adjacent properties,” Mr. Coppola said of the Trinkaus report, adding that at least one of the walls would be impossible to construct without going onto neighbor’s property. He said he wanted as a condition for the applicant to seek an easement.

The Trinkaus report calculated that the applicant is only leaving 10.1% of green space.

Mr. Coppola listed multiple standards of the P&Z commission that he argued are violated by the proposal to date, including public health and general welfare, protection of environment, property values, adequacy of open spaces, screening and buffering, harmony with adjacent development, preservation of natural attributes of the site and scenic views, drainage and design harmony with neighborhood and relationship to natural terrain and vegetation.

“At this point we believe all of those standards are violated by the proposed plans to date,” Coppola said. 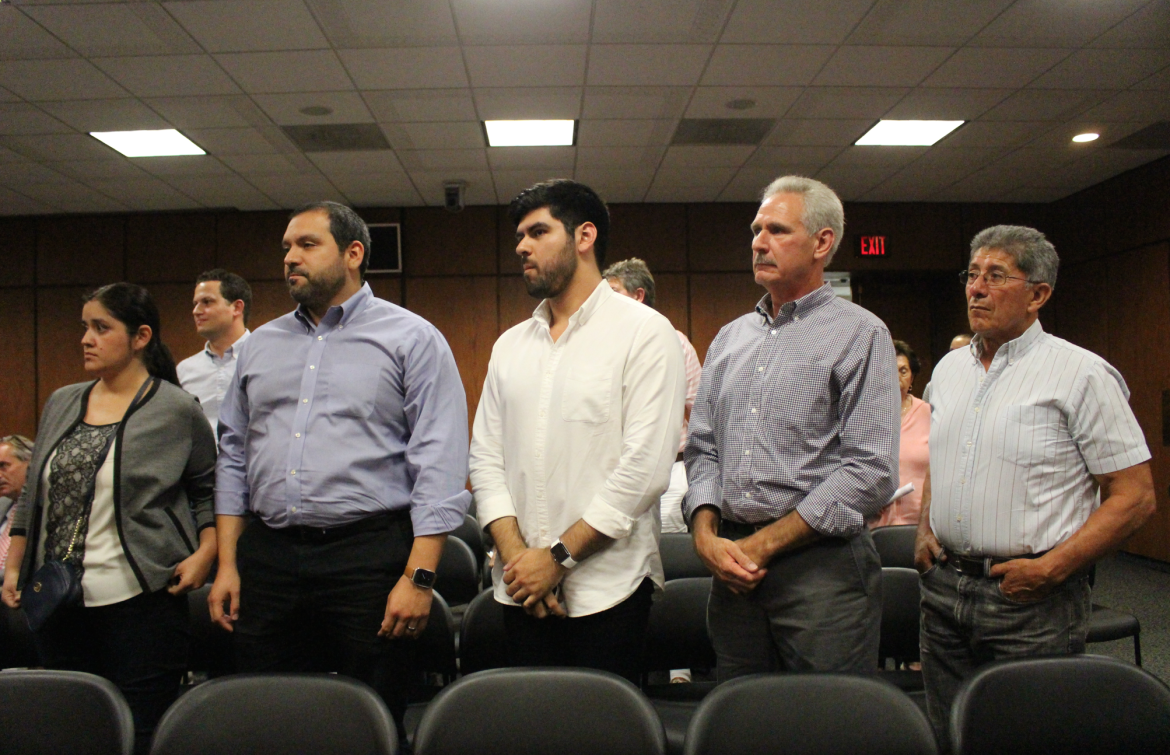 About two dozen neighbors showed up at the P&Z meeting on Tuesday night to express concerns about developing the steep slope on Westview. Among those who spoke were Mr. Belmonte, Ulf Lindahl and Vivian Schablin. Credit: Leslie Yager

The  neighbors downslope said they were concerned about detriments to their properties, starting with Ulf Lindahl, of 21 Westview place, who said his basement was flooded after development of Finney Knoll where land was raised with retaining walls. He also expressed concern about the damage to the street and neighbors’ property caused by hundreds of trucks bringing in landfill and rocks, and inability of trucks to turn around on the narrow, dead end street.

David Belmonte of 8 Fitch Lane, which is below and one property over form the proposed development, said he was concerned about water. He said his basement has flooded and he had to replace carpets and hard wood floors as a result work done during development of Finney Knoll. “My main concern is putting up this Eiffel Tower. We’re going to have water problems again,” he said.

Vivian Schablin, 30 year resident of 6 Hines Lane said  an arborist recommended by Bruce Spaman, Town tree warden, cautioned that disturbance of soil on the slope can impact erosion and drainage, and that the trees stabilize the hill behind her house and absorb water. She said the proposed retaining walls would be 30 ft from her kitchen window and loom large, blocking her sunlight. “The wide, stepped configurations will create a waterfall onto my property,” she added.

Ms. Schablin said the neighbors were not notified of the proposal because the agenda item was not advertised in the Greenwich Time as required. “It’s sheer accident that I found out about this,” she said. “This system benefits the owners and developers at the expense of the neighboring residents,” she concluded.

Patricia Carr who previously lived on 31 Westview Place but lives down the hill on 12 Cary Rd, having recently completed construction, described both streets as deficient.  She said on Westview, emergency trucks have to come in backwards because there’s no room to turn around.  She said snow removal is also tricky.

Mrs. Ramer asked Mr. Bristol about 25 ft separation between rain garden and drainage system proposed, and said it was inappropriate that test pits had not been done to know what the drainage is. 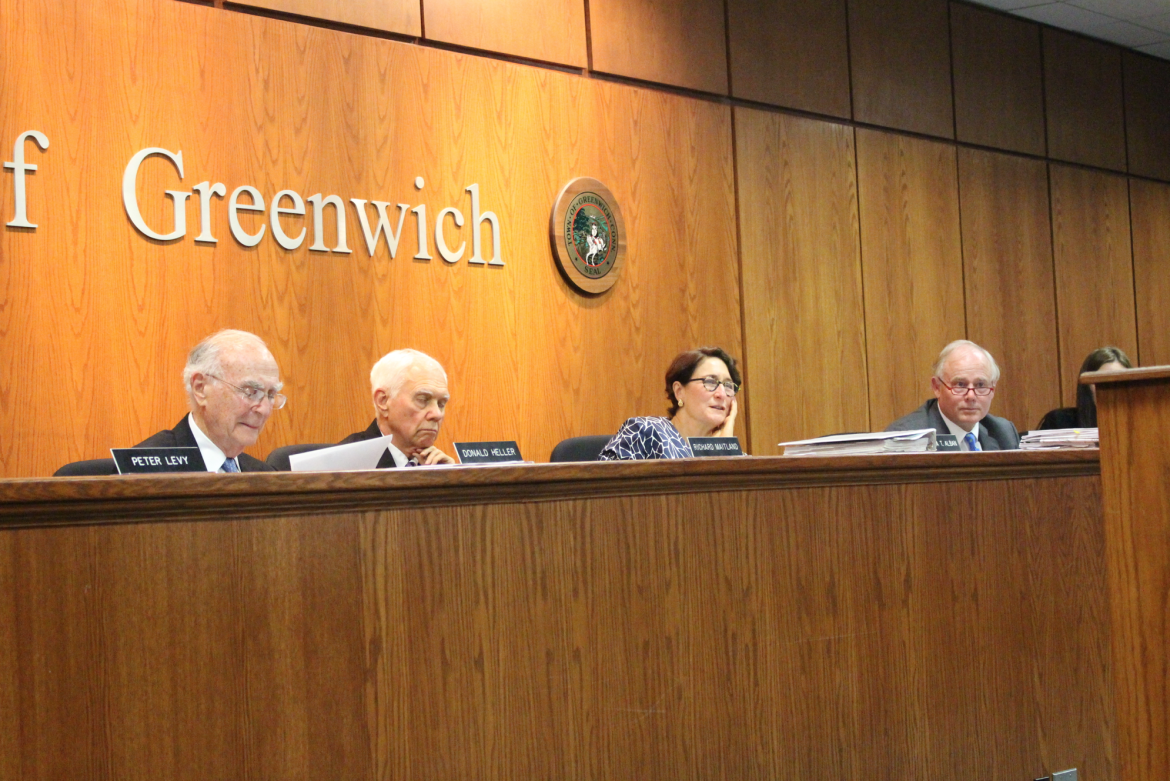 Mr. Bristol said the plans are vetted by the DPW engineers and the engineer hired by the applicant, Tony D’Andrea, is well known and has done hundreds of projects in town.

“We’re able to intercept all the water,retain it as required by the drainage manual, and discharge the excess through the drain that runs through the property,” he argued.

“”We don’t have to have a cookie cutter approach to everything. Everything we propose will work because we know how the soils work and where the water will go. There’s only a surprise if we don’t understand the topography,” D’Andrea said.

Mr. Bristol said his client would redesign the proposal and concessions would include working the home into the slope a bit more, reducing the walls, lowering the profile, and taking the comments from P&Z and neighbors to heart. 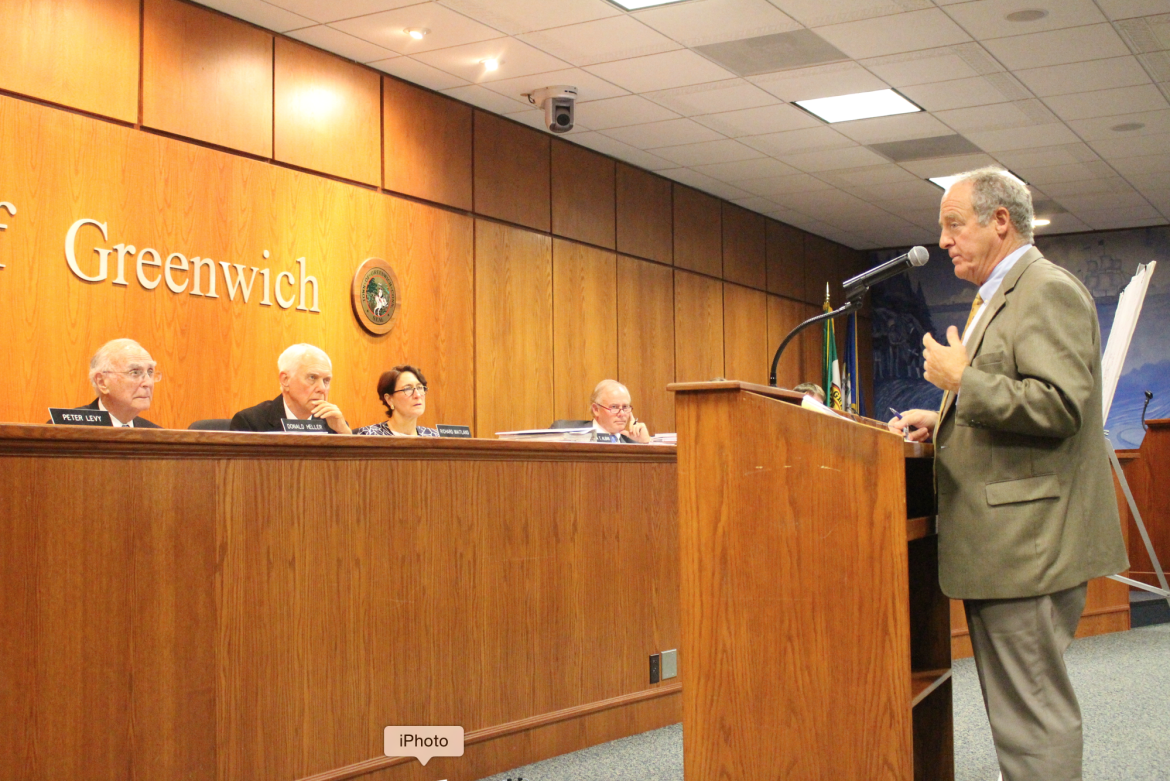 Engineer Tony D’Andrea said the drainage plans for the proposed house on Westview were very good.