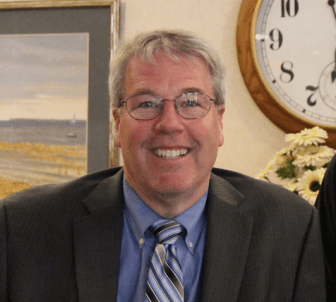 In a letter distributed Monday night, Mike Mason announced he would withdraw his name as Republican candidate for First Selectman and instead seek another term on the Town’s finance board, the Board of Estimate and Taxation.

Mr. Mason chaired the BET until the last election when Democratic member Jill Oberlander was the top vote-getter and was unanimously voted in as the new chair.

With Mason’s announcement, the stage is set for State Rep Fred Camillo (R-151) to officially receive the endorsement of the Republican Town Committee on Tuesday night at their nominating meeting at Town Hall. The election is on November 5, 2019.

Democrats last week endorsed BET chairwoman Jill Oberlander to run for First Selectman alongside Sandy Litvack who will run for a second term as Democratic Selectman.

While Camillo spoke in favor of GHS Rugby coach Joe Kelly’s candidacy for Selectman at a May kick off event at the Milbrook Club, calling him a great guy and saying, “I remember 2016 primaries when Donald Trump labeled another candidate ‘low energy.’ You’re not Low Energy Joe!” Coach Kelly has since changed course.

Mr. Kelly has instead set his sights on a spot on the Board of Education, though the Town legal department said that would present a conflict of interest.

Lauren Rabin, a current member of the Board of Education, is seeking the party’s nod for Republican Selectman.

She said in an interview with GFP in June that if she wins, she would work alongside whomever becomes the other Selectman and First Selectman.

In a scenario in which she would serve on the three-member Board with Oberlander and Litvack she said, “That would not be my preference, but I would work with it.”

Other candidates hoping for the RTC nod for Selectman are Granit Balidemaj and Dan Quigley.

In his letter, Mr. Mason said he had been humbled by support from places he hadn’t expected.

“The work began and 16 years have gone by so fast. Good economy, bad economy, spend, don’t spend. Make policies, define planning and always know where the town was and where we wanted to go. And always keep Greenwich as the best place to invest, raise a family, retire, protect our low tax rate and continue to make Greenwich the the envy of our peers,” he wrote adding that he had learned how important it is to listen, learn and take a bipartisan approach.

“Greenwich is my priority. We are in a time where external influences are causing memory lapse of what Greenwich really is to so many. We are victims of these new external challenges and what looks like a new focus to use Greenwich as a bully pulpit to address national issues rather than protecting our neighbors and town assets.” – Mike Mason

Tuesday night’s RTM nominating meeting and vote is at 8:00pm in the meeting room at Town Hall, 101 Field Point Road. (Refreshments at 7:30pm)