Volunteers manning a table outside the US Post Office in Cos Cob were hard to miss this week. With a giant poster featuring Donald Trump, Pat Servidio and his colleague Donald Clark in his red Make American Great Again hat caught many eyes.

For several days, the duo were stationed firmly on the sidewalk, but careful not to block it, spreading the word of the Lyndon Larouche PAC to anyone willing to listen.

According to Mr. Servidio, a lifelong Greenwich resident who retired after decades working for New England Oil, reactions were mixed.

Some stop and politely listen, he said. Others shout obscenities or worse, going as far as ripping up LaRouche literature and throwing it at Servidio and Clark. 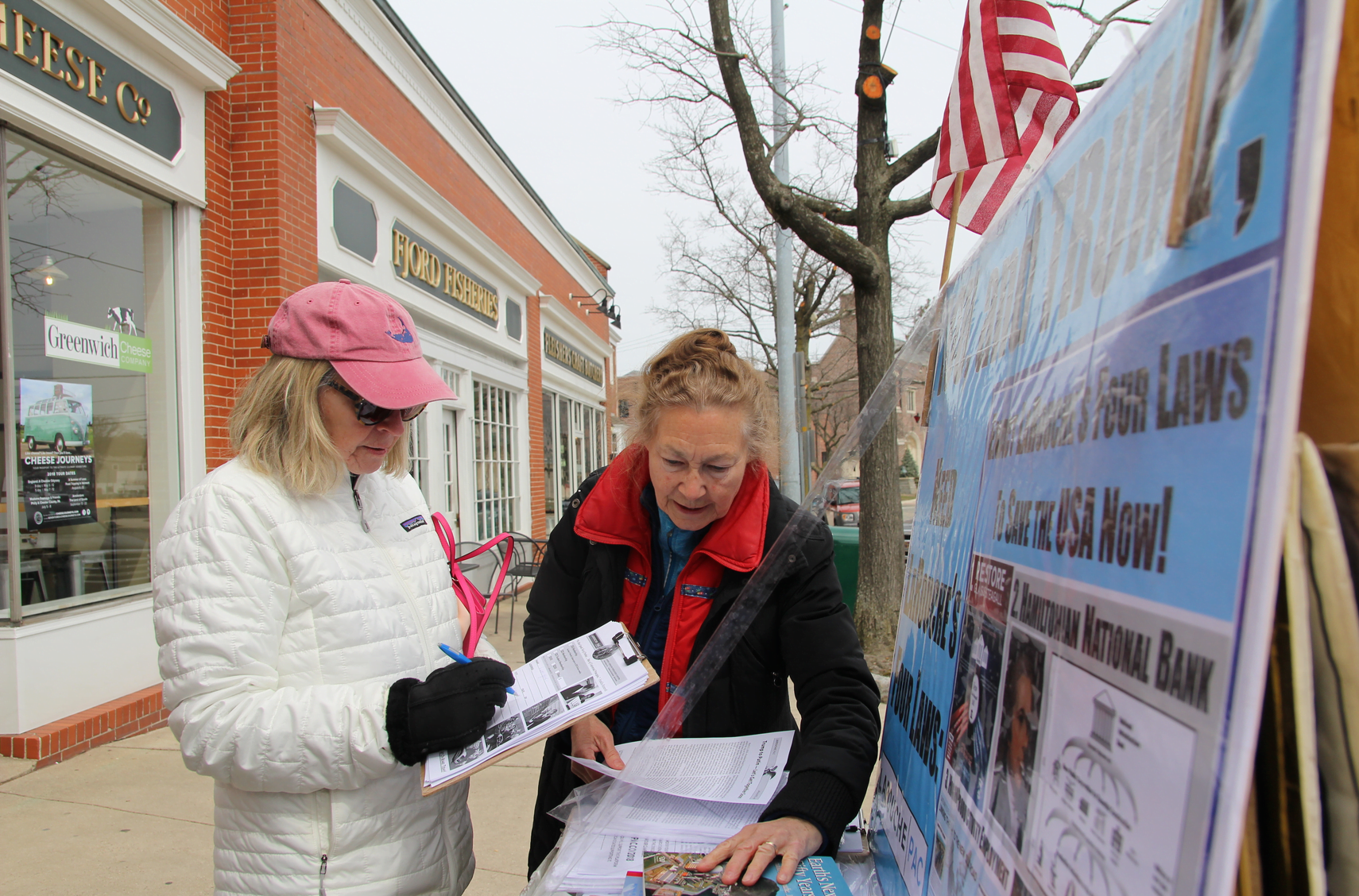 For those who listen, the volunteers, who refer to themselves as activists, share Larouche’s four economic laws: 1. Reinstating FDR\’s Glass-Steagall banking separation act. 2. Returning to a national banking system as defined by Alexander Hamilton (versus the British monetary system) 3. Directing trillions of dollars of US federal credit towards high tech and high productivity employment, including the rebuilding of US infrastructure, and 4. Expanding NASA’s human space exploration program.

Asked about their support of Donald Trump, Servidio said the President’s past behavior is irrelevant.

“It’s character assassination on both sides,” he said. “When all these candidates were running, the Democrats would bring up the past, like with Judge Roy Moore in Alabama, and issues of character. But the bigger issue is the attempted coup against Trump, and they’re using the press to make stuff up.”

To illustrate his point, Servidio asked, “Where was CNN in 2003 when the Iraq War started? (Former British Prime Minister) Tony Blair pushed Iraq and weapons of mass destruction, and war broke out killing thousands of children.”

The LaRouche supporters say that in the 2012 Sandy Hook massacre, and in the Parkland, Florida shooting last month, the FBI knew what was coming, but turned a blind eye intentionally in order to use the media to create a groundswell of activism for gun control, with the ultimate goal of disarming citizens. 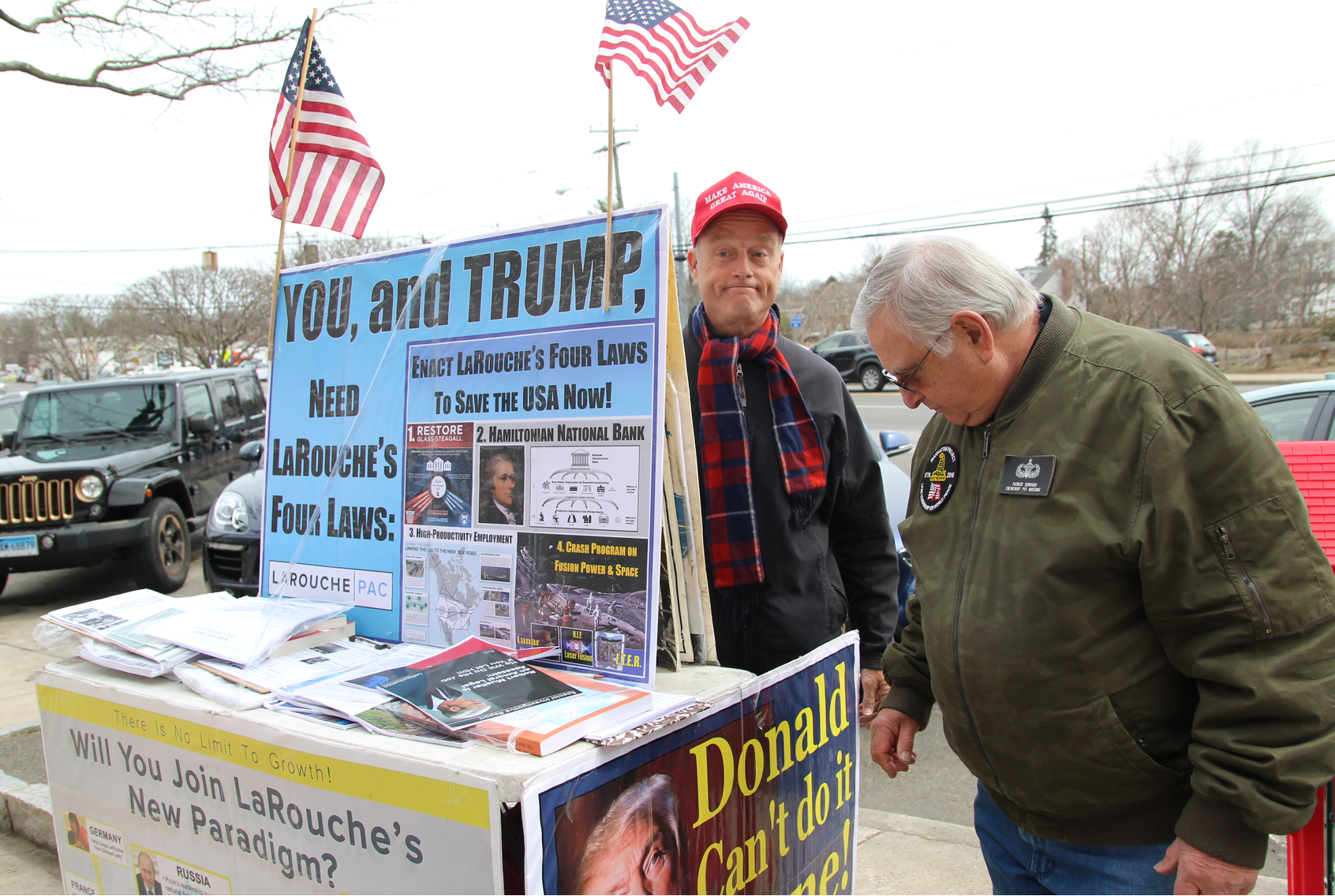 Donald Clark and Pat Servidio in Cos Cob on March 27, 2018 Photo: Leslie Yager

Servidio added that days before Adam Lanza fatally shot 26 people in Sandy Hook, CT, 14 port-o-potties had already been set up by the school.

“They roped them off and put up signs that said ‘Report Here,'” he said. “It’s fake. It’s their way to confiscate guns. They want people to have their guns taken away, and only the FBI and law enforcement to have guns.”

Servidio said the attempted coup against Trump originates in Britain.

“We’re going to do what the British tell us to do, and even invade Russia. They (Britain) are offering to work with the US on terrorism and arms control, and are saying Russia is a threat, when in fact Russia is key in fighting terrorism.”

Servidio and Clark said that Christopher Steele’s dossier has yet to be verified.

“They’re trying to sink the President to keep him away from Putin, which changes the geo-political state of working with Russia instead instead of with the British. …The British are writing dossiers on leaders as a form of blackmail.”

And, Servidio said, “There was no hack on the DNC computers. It wasn’t the Russians. It’s just a handful of people running a scam against the United States – John McCain, Christopher Steele with his dossier, (former CIA director) John Brennan, (former FBI director) James Comey and Richard Mueller.”

“The worst thing is the media takes the propaganda and distributes it,” Servidio said. “How can they attack Trump when he opposed going into Iraq in the first place?” Servidio asked, adding that the goal of those against Trump is to take America into war.

“People slamming Trump and Putin are just pulling us into war, saying they are the war threat,” Servidio said.

Of former FBI director Robert Mueller’s special counsel investigation into possible Russian interference in the 2016 US elections, including exploring links between Trump’s 2016 campaign and the Russians, Servidio said, “Mueller in the 1980s ran the prosecution against LaRouche and used phony stuff then too. He’s an amoral legal assassin,” he continued, holding up a LaRouche PAC special investigative report with a suggested contribution of $20.

“I spread news of the future, which is massive infrastructure development,” Servidio continued, adding that China is a great role model for the US. “They’ve taken 700 million people out of poverty. They are working and supporting their families and adding to the future of China.”

Servidio said that in contrast, Americans are working more hours, for less money, and sacrificing family time on Sundays.

Servidio and Clark say that the premise of LaRouche, who is now 95, is to prioritize children and families.

“Years ago it was all about family time. Sundays lasted all day,” Servidio said. “This oligarchy said we have to destroy the spirit of the American family. …They want you to work on Sundays so that they can make more money.”

Servidio and Clark say that America doesn’t make anything any more, but that Russia and China are willing to invest in US infrastructure and take people out of poverty.”

“For stagnating industrialized nations, this is a critical opportunity for a new era of rebuilding, advancing and producing… the US needs to join this program for win-win global development,” states the LaRouche literature.

More information on the LaRouche PAC is available online. 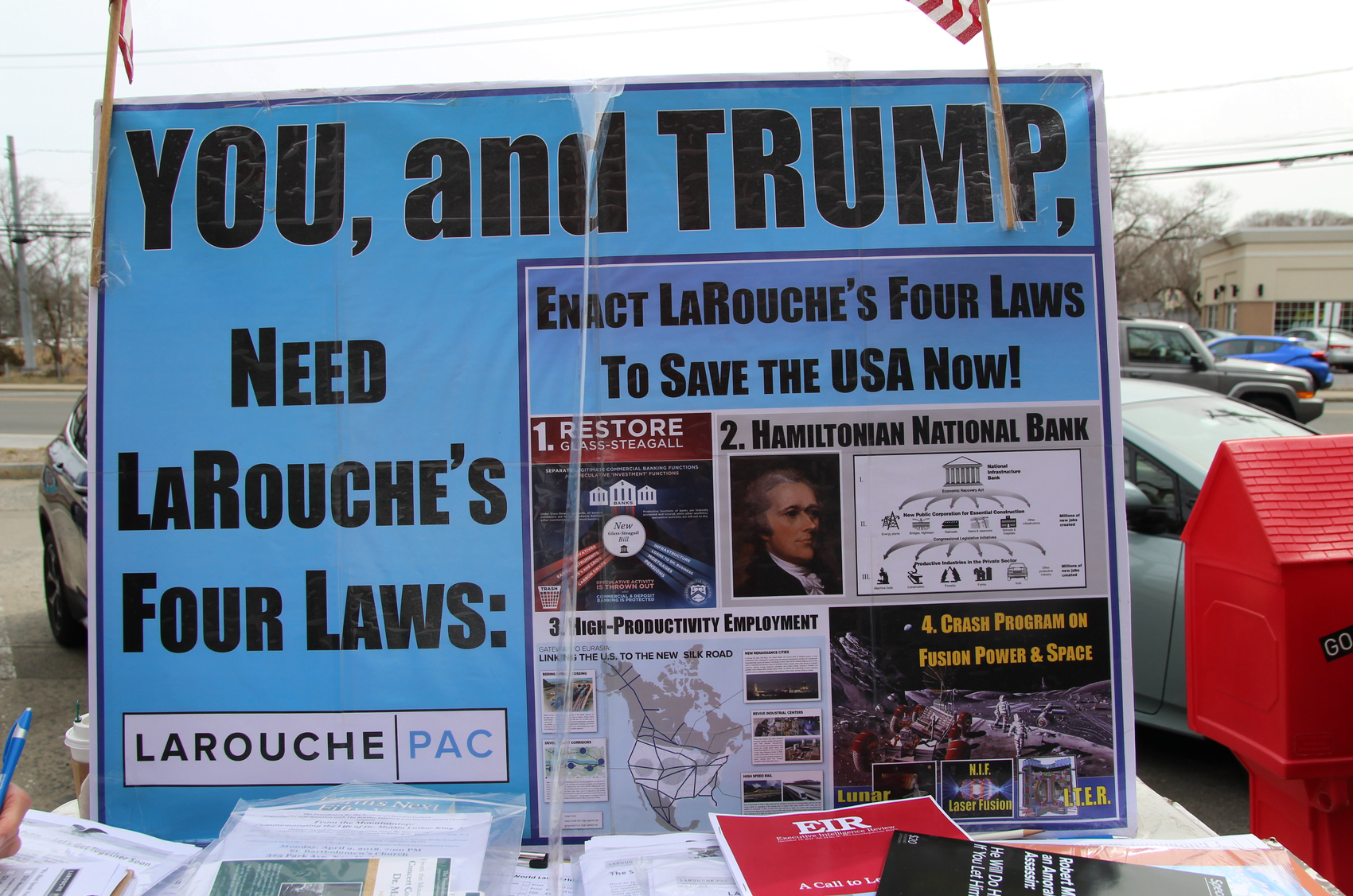