At the February Harbor Management Commission (HMC), the process of approving the minutes from the previous meeting took over an hour, which was unusual.

Also unusual, the harbor master sat at the table with the other commission members.

Commission member Peter Quigley said he had many issues with the draft of the minutes based on their inclusion of personnel matters, and the inclusion of disparaging remarks about a member of the commission.

“We cannot be collaborative if we are not working with the harbor master,” Quigley said, adding that taking away the harbor master’s boat from him would be akin to taking a hammer away from a carpenter.

He suggested multiple changes to the minutes, drafted by Penny Monahan, and chastised the committee and the chair for “disparaging remarks made in public,” saying they have “a destructive and polarizing effect on the capability of this commission to do an effective apolitical and unbiased job.” 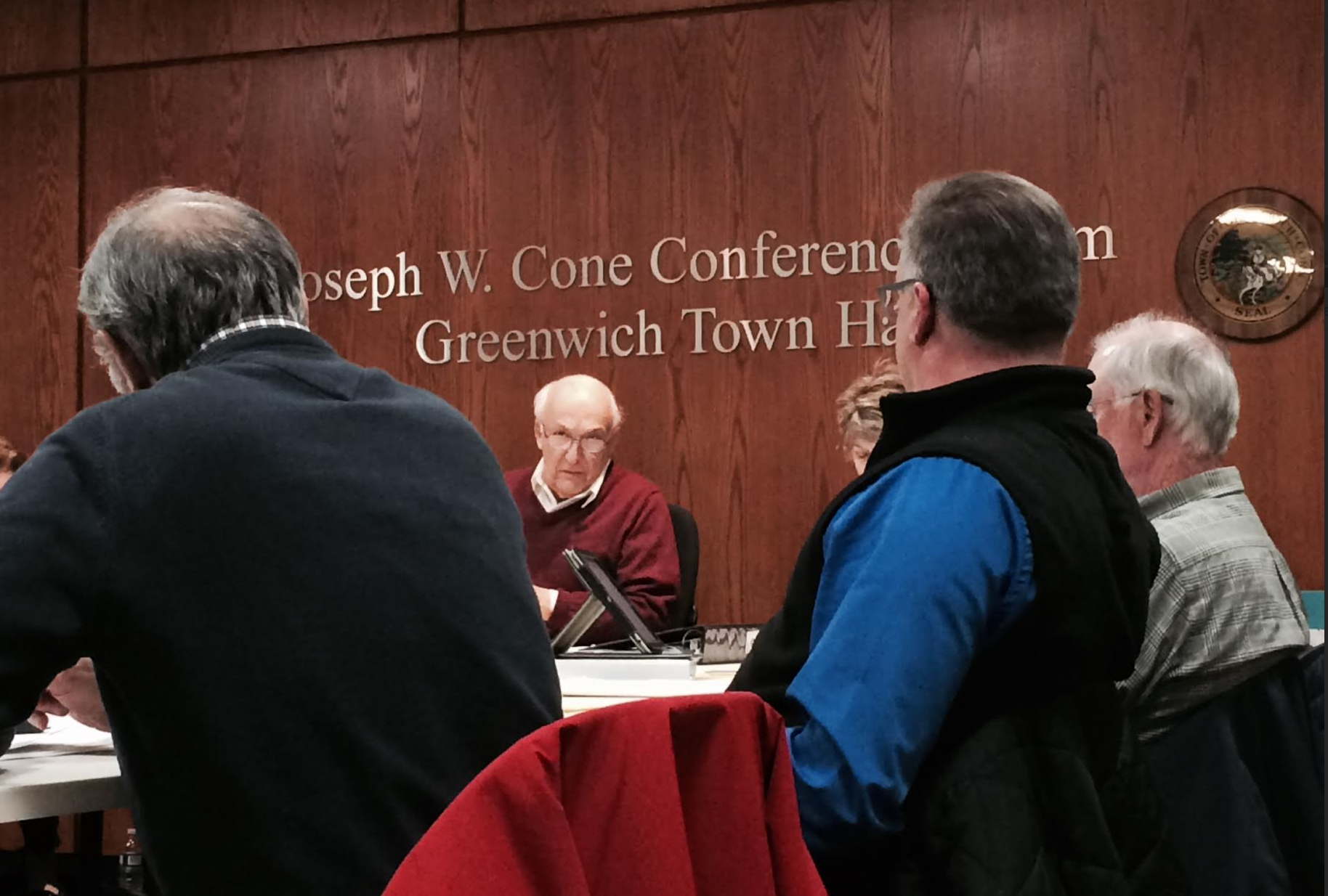 Quigley said personnel reviews of members had been handled in a cavalier and casual manner, referring to recent memo attached to the draft minutes of the Jan. 19 HMC meeting that disparaged harbor master Ian MacMillan, and referring likely to remarks made by HMC chair Frank Mazza at a Board of Selectmen meeting.

On the topic of a personnel review, Quigley said, “It ought to be done in a proper, orderly, due process manner by FOI and Robert’s Rules following one’s Constitutional rights to defend oneself against unfair and unsubstantiated accusations.”

“Who really wants to be part of this conduct and behavior?” Quigley asked. “This is not only a reflection of our individual reputations, but on the reputation of this commission.”

Specifically, the draft meeting minutes included a photo of the harbor master’s boat in a messy state with a can of beer on the bow. Mr. MacMillan has stated that the moment the boat was photographed was not the day he turned it in to be decommissioned for the winter, and that it was dirty because he had just hauled out some grubby tackle and the water had been turned off for the season.

Quigley asked that the draft minutes be revised to exclude the photo and memo penned by commission member Bruce Angiolillo stating, in part, “Let’s take a look at how Mr. MacMillan takes care of the boat and what it says about his professionalism. Here is a photograph of the condition of the boat when it was turned in to the Town for decommissioning and winter storage. Does this not offend? Does this not make you angry? Does this not make you sick to your stomach?…Please take one more look at it and note the empty Miller Lite beer can in the drink holder at the helm.”

Quigley also asked for an edit in the minutes, which stated, ‘Peter Quigley left the meeting because he did not get his way.’

“I would strike that subjective statement,” he said. “That was not why I left the meeting.”

He asked that the minutes be edited to say: “Peter Quigley’s departure was due to a failure of commission officers to recognize and acknowledge his standing objection to a point of order that allowed for appeal of a standing order on a personnel related matter, including public submission of material not posted on the agenda as order, violating FOIA and Robert’s Rules of Order.”

Quigley and Gary Silberberg both charged that HMC meetings had been improperly noticed according to FOI rules, which require that meetings be submitted to the town clerk. 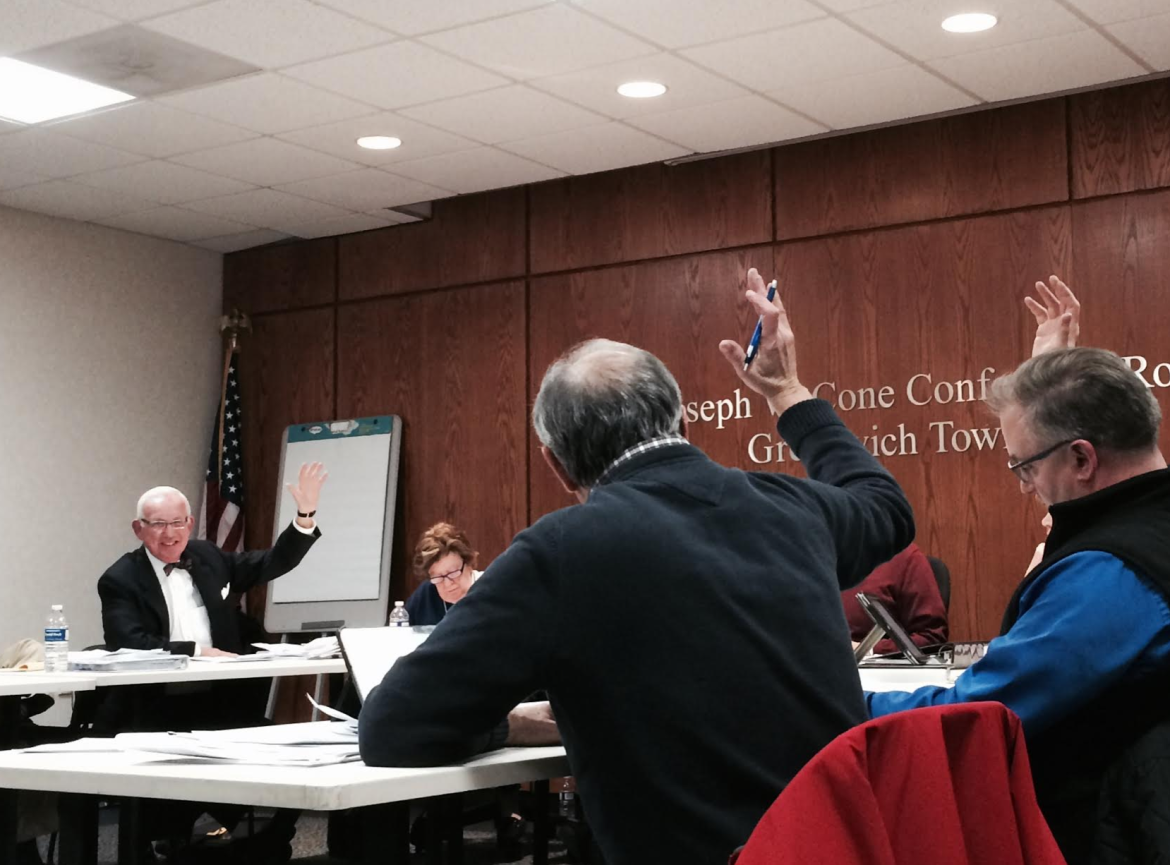 Mr.Mazza said the meeting schedule, and changes to the schedule are posted online. He said that is as good as giving them to the town clerk.

Bernard Armstrong, an alternate member of the commission, said he was disappointed in Mr. Kinner who had offered to serve as Parliamentarian, but had not intervened at any point to instruct the commission on proper meeting conduct.

Mr. Angiolillo argued that the commission is not subject to Robert’s Rules of Order. “I anticipated that expressing a contrary view would be met with calls of being out of order, and indeed a member rising and shouting,” he said.

Mr. Armstrong agreed, recalling that the commission voted last year to follow by Robert’s Rules of Order. “We adopted that, and Steve (Kinner) was going to be the Parliamentarian,” Armstrong said. “Steve, you should have exercised your authority as Parliamentarian, to make sure the rules were followed.”

Mr. Armstrong made a motion to strike Mr. Agiolillo’s remarks from the record.

“The FOI Act, doesn’t give the employee – even if the harbor master was an employee – a right to executive session. The right of the employee is for the session to be held in public,” Angiolillo said. “He is not subject to our control, as he has stated many times.”

“The harbor master is an ex officio member and has all the rights of any commission member,” Quigley said, adding that it is unprofessional and out of order to discuss any member’s opinion of another member. “We’ve entered the Wild West here.”

Quigley added that there are penalties in Freedom of Information Act as misdemeanors if things are done incorrectly.

Mr. Armstrong made a motion to strike disparaging remarks about the harbor master from the record. 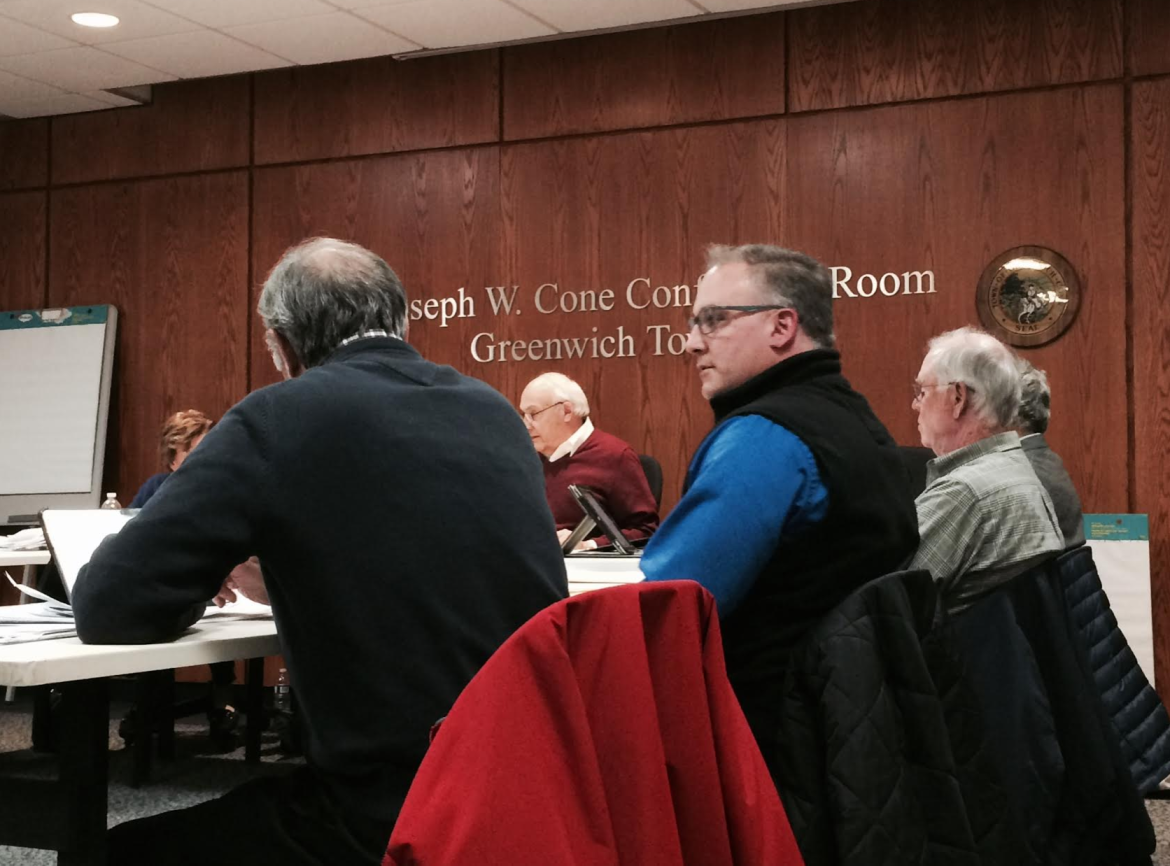 Lt. James Bonney at likely his last Harbor Management Commission meeting, as he is not seeking another term and stated that he has conflicts with the remaining two meetings of his term.

Lt. James Bonney who said he had conflicts with the next two meetings and wouldn’t be able to addend, and did not intent to serve another term, said he was uncomfortable with HMC members remarks. “We shouldn’t just fire off spurious things,” Bonney said.

He also took issue with the any member speaking on behalf of the entire commission without the group’s consent. “I don’t think that’s proper conduct. It makes me feel like people think that’s my feeling also.”

“When there are reports to BET or Board of Selectmen, statements given that represent the entire board should cleared first,” Bonney said.

At the Jan. 28 Board of Selectmen meeting, (1 hour 21 minutes) where Mr. Mazza presented a $60,000 budget request, asked the selectmen if they had seen the photo of the harbor master’s boat. That triggered a conversation about possibly taking away the boat from the harbor master.

“We should try to conduct ourselves in a more professional manner. In the RTM, they would never do this,” Bonney said, making a reference to statements ‘thrown from the hip.’

“It just makes us look like fools when we’re in the paper every day. I don’t agree with the tone of any of this,” he said, adding that he agreed the group should strike disparaging remarks from the record.

Mr. Angiolillo said no one had objected to the factual inaccuracy of his statements. “It may be that you don’t like that I put this on the table, but I have sat and listened patiently and listened to the suggestion that we give tax payer money to the harbor master.”

“He’s missing the point entirely. There’s a proper way to conduct performance reviews,” Quigley said. “There has not been a forum to allow the harbor master to respond. We may all agree with Mr. Angiolillo.”

Lt. Bonney said 33 people in the audience wasted an hour of their lives listening to a discussion on the minutes.

Mr. Mazza said criticism of him for speaking on behalf of the entire group was unfair. “I have to go to the meetings. Someone has to go.”

“We should all agree on what will be said in advance,” Bonney said.

“I don’t know what’s going to happen. I have to give answers. You cannot anticipate that,” Mazza said.