Leaders of the Young Democrats and the Young Republicans at Greenwich High School organized a rally on Wednesday during second lunch block to condemn hate.

During the 20 minute block, about 25 students signed a banner that said #GHSHatesHate! and listened to remarks by Sandy Litvack, a Democrat who is challenging Peter Tesei for First Selectman, and the head of the GHS diversity club, Felipe Sanchez.

Young Republicans leaders Jack Bound and Luca Barcelo said that Sara Stober had reached out to them to collaborate on the event and they were eager to join forces.

“We have to be unified against hate,” Barcelo said.”The students are Greenwich High School as largely liberal. But we must find a compromise and stand against hate.”

“People say because we’re young we can’t do anything. But we wanted to say that even though we can’t vote, we can’t legally drink and we can’t even drive with more than one person in the car, we can stand up to hate,” Stober said. “But no matter where you are, or who you are, hate is unacceptable.”

Felipe Sanchez, president of the Diversity Awareness Club at Greenwich High School, introduced himself as a fellow American who denounces hate, bigotry and racism.

“What happened in Charlottesville served an eye opener,” Sanchez said. “It showed us that our fight for equality, civil rights and diversity is more important now than ever. It showed us that we are pioneers of change, the ones responsible to make a difference.”

“Today, in this courtyard, we are denouncing hate, and promoting awareness, love and our solidarity. We are rectifying a bold and blatant mistake by showing white supremacists, neo-nazis, KKK and other hate groups what will never understand, and that is love and compassion.”

“I’m glad to share the stage with leadership of both the Young Democrats and Young Republicans, to show that no matter your political affiliation, we are here to denounce hate, bigotry, and every other menace to our civil rights,” Sanchez said. 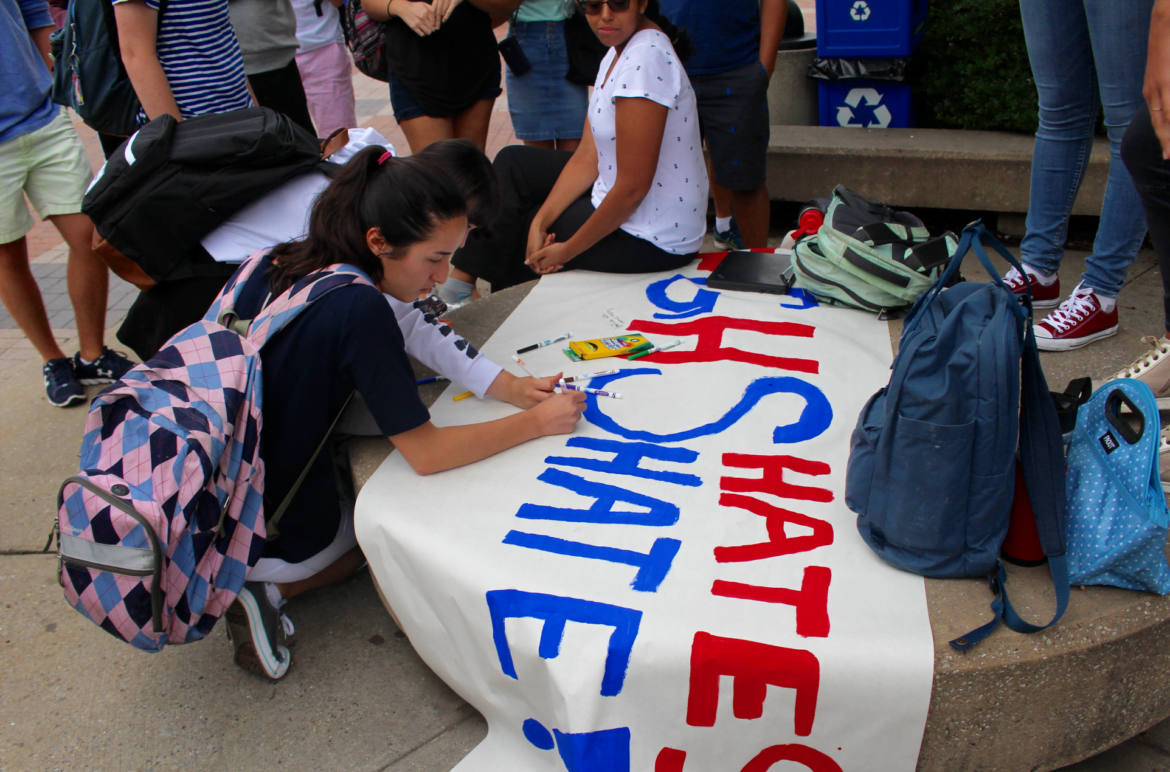 “Nelson Mandella said that nobody is born hating,” Litvack said, adding that there is an old song that says children have to be carefully taught by the time they are 7 or 8 to hate the people their relatives hate. “That means hate will probably be with us for a long time.”

Litvack said when people march with torches and shout neo-Nazi slogans that hate is easy to spot. But, there is discrimination, exclusion and disrespectful discourse that need to be recognized.

“Don’t give up,” Litvack said. “Speak up and say I will not accept this. This is not okay.”

In addition to inviting the Young Republicans and the Diversity Awareness Club to share the event, the Young Democrats invited Sandy Litvack, Democratic challenger for First Selectman on Nov 7, and and both US Senators Murphy and Blumenthal, though the senators were unable to attend.

“The only way to combat hate is with love,” Stober said. “Hate is not many sided – it’s one sided.”