Jill Oberlander, Candidate for State Rep for the 150th District, continued her Listening Tour by meeting Greenwich residents. This week she asked questions about transportation.

Before dawn on the morning of October 8, Mrs. Oberlander was on the platform at Greenwich train station where she asked commuters their opinions of about Metro North.

Answers ranged from “It’s fine, I have no complaints,” to “I hate it, and I’ve been taking the train for 20 years!”

One Greenwich resident, who works in finance and preferred not to be named, said, “Running Metro-North would be my dream job – I would conduct a complete overhaul from top to bottom.” He rattled off various ways he would hold Metro-North accountable for service, performance and safety. 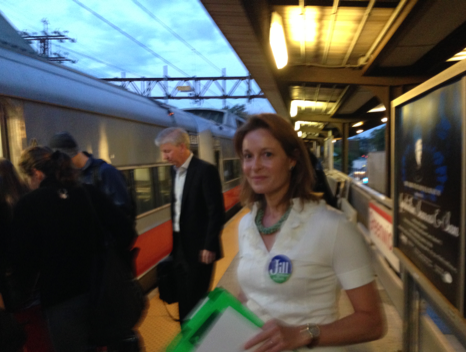 Mrs. Oberlander, who was a commuter herself for many years and spent six years working at the MTA, said that if elected she hopes to use her insight and experience to help improve the overall performance of Metro-North for Connecticut riders.

Oberlander advocates a system  through which commuters, through pre-tax transit subsidies are allowed to use pre-tax dollars to pay for their commutation costs, which she suggests will lower the cost of public transit for commuters, reduce congestion on the highways and reduce air pollution. She also advocates HOV lanes and shared-ride programs, combined with strict reinforcement of truck weight limits and higher penalties for violations during peak hours.

Oberlander recommends setting up a State Infrastructure Bank modeled after those in Vermont and the City of Chicago, to spur public-private partnerships and joint financing of important projects that would otherwise be delayed or cancelled. She also recommends sourcing grant money from the federal government.