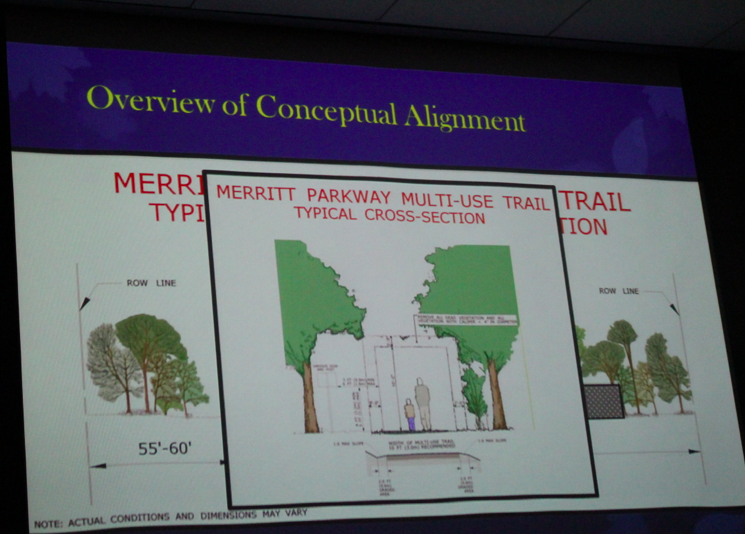 At Thursday morning’s Board of Selectmen meeting, Peter Tesei brought up the CONNDot proposed 37 mile Merritt Parkway Multi-Use Trail that would run from Greenwich through Stratford, traversing eight towns.

The proposed trail which was hotly debated at a public hearing Tuesday, September 16.

ConnDOT officials Michael Calabrese and project engineer Michael Cherpak said they were neither in favor of, nor opposed to the project, but rather present to explain the proposal and collect feedback. There was plenty. The state of Connecticut owns a 300 ft right-of-way on the Merritt, of which only a third to a half is used for the road.

The proposed trail, which would be built in the state right-of-way along south side of the Merritt Parkway, would be 10 ft wide. Overall, 63% of the trail would be at-grade, 16% with retaining walls, and 21% with bridges or boardwalks.

Mr. Tesei, on Thursday said the project’s estimated cost is $200-250 Million. “It is an extremely large amount of funds to establish a new infrastructure and our existing infrastructure is not in the best of shape,” he said, adding that rail and highway projects are more deserving of funding.

“They’re not going to cover the maintenance for trash and debris,” Tesei said of the state’s potential plan. “There is widespread agreement that why are we doing this now, when we have things falling down and needing to get fixed?” He also expressed concern about the ability of first responders to respond to an emergency on the trail as there are no public access points in Greenwich included in the proposal. Nor are there park and commute lots for the Merritt in Greenwich, as there are in other towns.

Tesei suggested that the plan was conceived and developed at a time when the CONNDot had “a knowledge gap.” He said a lot of engineers were retiring and they were taking advantage of incentives.

Selectman Theis asked what would happen if the multi-use trail were to be constructed and additional lanes added to the Merritt Parkway. Mr. Tesei said that the Merritt Parkway Conservancy want to keep it as close to how it originally was in the 1930s and would oppose that, making it unlikely.

Mr. Tesei said he urges residents to take advantage of a link on the Town’s website to a comment form to submit to the state Department of Transportation. He said the state is taking comments through Oct. 16.