At Tuesday night’s P&Z meeting, an application from  Lucia and Tommaso LaRocca for a final site plan to designate unit “A,” an existing one-bedroom basement apartment in a brick duplex style house at 74 Byram Terrace Drive sought consideration under the state’s affordable housing statute 8-30g.

The application to make the basement apartment, which their attorney John Heagney argued was not exactly in a basement (see photo) was triggered by a Cease and Desist order from the Town’s Zoning Enforcement Officer.

Similarly, last August, a legal two-family was found to have an illegal third apartment up the street at 62 Byram Terrace was also  flagged by the ZEO.

There the owners also went before Planning & Zoning with an application to bring the property up to code and turn the illegal apartment into an “affordable unit” under CT statute 830-g.

What is 8-30g? By state law, towns are required to have 10% of their housing “affordable.”

The 8-30g statute exempts owners or developers from local zoning regulations, unless the development would “significantly threaten public health or safety.”

Greenwich’s affordable housing stock has for many years been deficient. It has hovered around just 5%, and the pinch feels like it’s tightening, as any Greenwich resident can attest.

While back country housing prices struggle and a house listed at $25 million recently sold for $17 million, “bargains” have not trickled down to people seeking affordable housing closer to town.

Certainly, every time an older house in the R6 multi family zone is demolished and replaced with multi-million-dollar condominiums, de facto affordable housing is lost.

Further, developers are starting to use the 8-30g statute to purchase older properties in R6 zones like  Chickahominy and tear them down to construct multi-unit buildings with many units.

While so far these 8-30g developments on small lots have been in Chickahominy, (one under construction behind the Two Door Restaurant, and one at 303 Hamilton Ave there is one in the works in downtown Greenwich at 62 Mason Street across from the Boy Scouts. Watch this space.

Cease and Desist Order
Last summer, at 62 Byram Terrace, owners got permission to make an illegal third apartment affordable. They had been issued a Cease and Desist Order. Neighbors complained that the illegal basement apartment didn’t have adequate parking and that tenants parked on the street, sometimes blocking the postal carrier’s access to mailboxes, resulting in undelivered mail.

Like 62 Byram Terrace, the proposal for 74 Byram Terrace came about in response to a Cease and Desist Order from the Town’s Zoning Enforcement Officer.

At 74 Byram Terrace, the applicants seek to validate the third unit without additional construction.

Attorney John Heagney said the owners, the LaRoccas, acquired the property in 1997 believing it had three legal units, and that they are taxed on three units. (According to the Assessor’s office the annual property tax is $6,120.74).

The Assessor’s office lists the property as a 3-family in two places, but on the same document the style is listed as “two-family up/down flats” with duplex occupancy and just two kitchen sinks.

“We come before you to ask that it be validated under the state affordable housing statutes,” Heagney said to the commission.

The commission met the application with skepticism.

Heagney replied that the apartment meets the state’s Dept of Housing standards and regulations.

“The basement has access to light and air. It is not below ground. It is at grade,” he said, though he acknowledged that the owners would have to replace some windows for egress purposes.

“The basement level is above ground and the window shown is comparable to windows on all sides of the building,” Heagney said. “They are all similar in size and shape.”

Victoria Goss noted the basement may be above ground, but so is the garage. She raised a concern about fumes.

P&Z director Katie DeLuca said staff had spent considerable time with the Dept of Housing in Hartford talking about affordable housing. Specifically, she said the Town of Trumbull  had a successful effort converting illegal units into affordable ones.

“They had a very successful program and they added considerable affordable housing stock,” she said. “Having said that it would be appropriate to wait on this application until you can show specific plans and provide an affordability plan to 8-30g.”

Also, the commissioners referred to a town regulation, 6-100, which encourages the inclusion of below-market-rate dwelling units, including an increase in FAR. (See Greenwich Municipal Code click here, go to page 108.)

“I am very uncomfortable with the idea of the affordable apartment being less desirable than the other apartments,” Alban said. “Because that’s not the intent of either our 6-110 regulation or the state 8-30g statute. If you believe it’s okay for it to have less bedrooms, I think it’s advisable to have our town counsel review this.”

“The law is that it has to have a comparable number of bedrooms. They’re trying to make the affordable apartment equal,” Alban said. 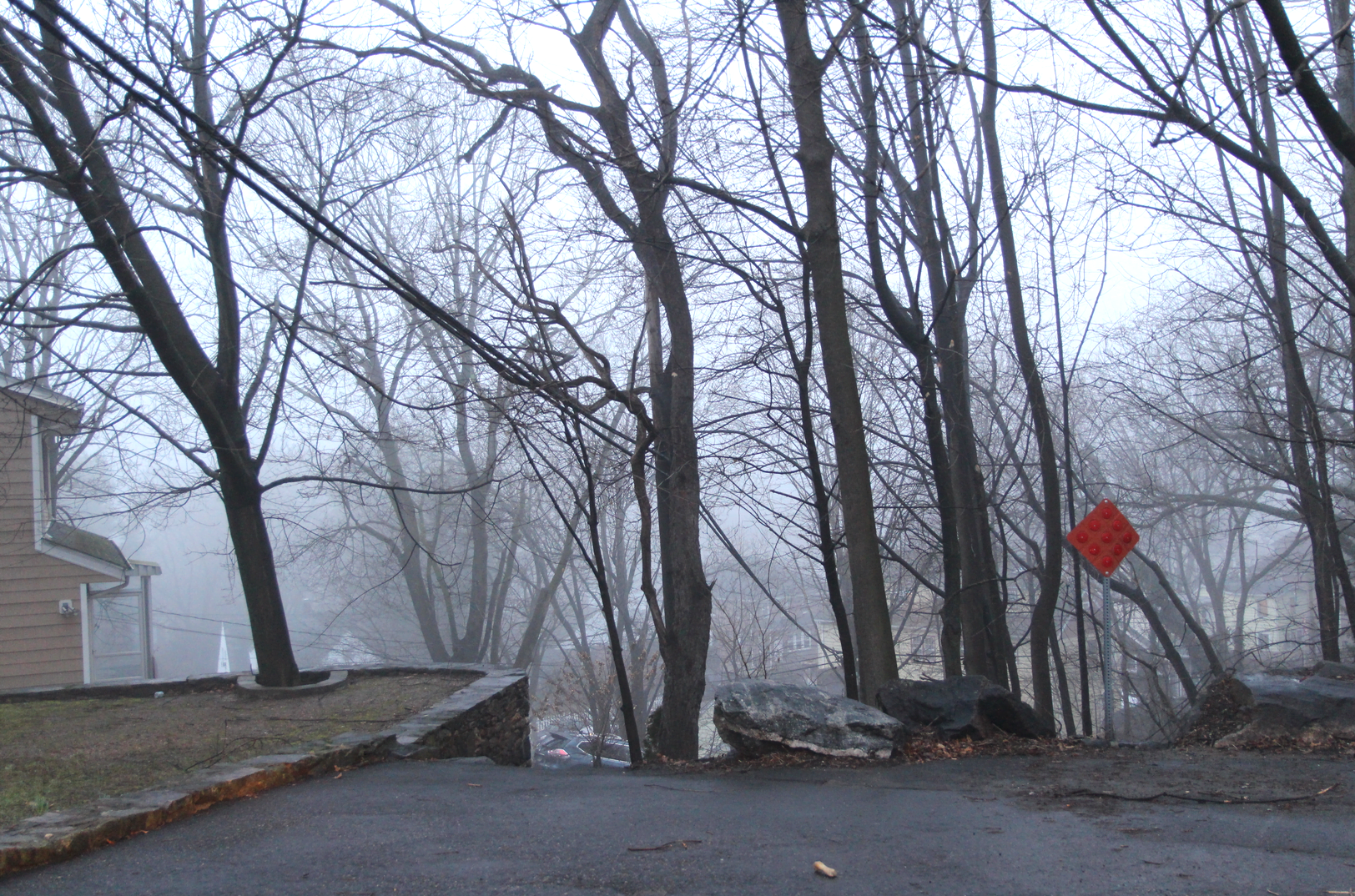 Dead end at Byram Terrace Drive features large boulders and an orange warning sign. Below the boulders the terrain drops off. Below is Pemberwick Road.

Commissioner Marci brought up the issue of parking. “The Zoning Enforcement Officer says you are short by 1.2 spaces,” he said. “There’s two spots in the garage and four outside.”

“We have an oversized driveway that can fit four cars easily,” Heagney said.

“I’m concerned about the garage. The photo doesn’t look conducive. You have 2 cars inside and 4 cars outside and 3 different units and 3 different families jockeying cars around,” Macri said. “Now it’s winding up on the street adjacent to the property.”

“We know Byram Terrace has parking issues,” Macri continued. “You show parking people parking adjacent to the property (at the dead end).”

“I believe it works in our application’s favor,” Heagney replied. “We are at the very end of Byram Terrace Drive.  If we don’t park cars there it creates a very dangerous condition,” Heagney pushed back.

“To use the street because nobody’s on it?” Macri asked.

“We’re open to other thoughts,” Heagney said, adding that he thought it increased safety to have cars parked at the foot of the dead end.

(There are boulders at the foot of the dead end, and beyond the boulders, the terrain drops off steeply. Below is Pemberwick Road.)

A neighbor, Ms. Rosati, testified that cars come down to the dead end to turn around all day long. ”

It’s gotten ridiculous over the years. Our concern is there are small kids on the street and cars come flying down the street. It’s like a freeway sometimes.”

The application was kept open.