In Greenwich, the Building Department at Town Hall learns about illegal apartments through a variety of channels.

P&Z director Katie DeLuca said they might spot electric meters and/or cable wires on the outside of a house going from one floor through to the other via the windows. Those are all clues, and the Assessor’s office alerts the building department.

In other situations, the building department receives anonymous complaints, which are sometimes from a tenant trying to get out of paying their last month’s rent. 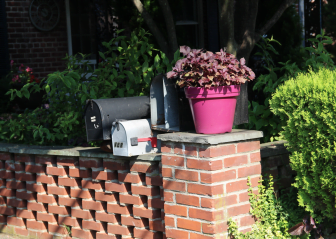 According to the building department, sometimes a disgruntled tenant complains, especially when they know they will be moving and don’t want to pay the last month’s rent. In those cases they research the permits to see if there are grandfathered situations where a two-family has permission for the third unit.

Often neighbors call town hall to complain, which they can do anonymously.

When there is a complaint, the building department checks to see whether there are permits in place. 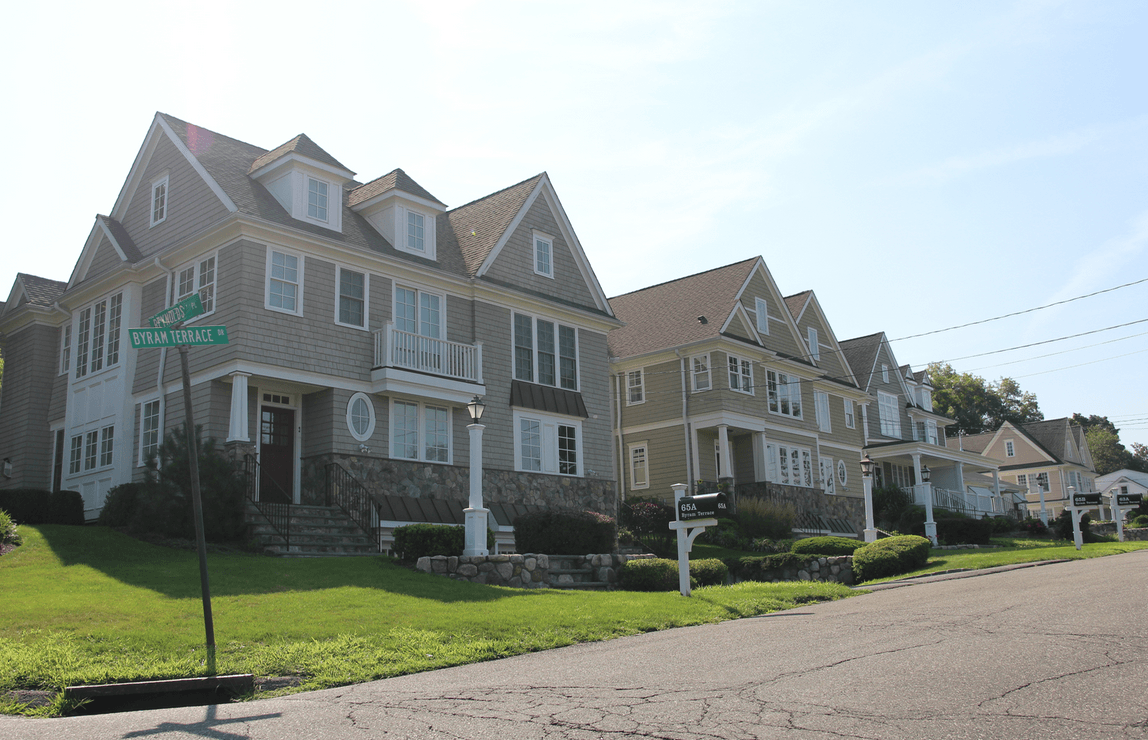 A neighbor on Byram Terrace said tenants at an illegal apartment park their cars blocking mailboxes at the condos across the street.

In the case of 62 Byram Terrace Drive, a property in the R6 zone, owned by Antoinette Delia, the Zoning Enforcement Officer received a complaint, investigated it, and found an illegal basement apartment, which was a third apartment in a two-family home. He subsequently issued a cease and desist order.

This Tuesday, at the P&Z commission’s meeting, the property owner, represented by attorney Thomas Heagney and architect Rudy Ridberg sought permission to keep the basement apartment by making it a legal 830-g affordable apartment.

The proposal is unique but could have implications for the future of the neighborhood.

Neighbor Ron Tyson who has lived directly across the street from 62 Byram Terrace Drive for three years, said he did not want the project approved. He said he had received a letter from the owner’s daughter who is handling the property for her mother, telling them about the “plight” she had with the neighbors.

“We had great words from her,” he said.  “Great story, very little action.”

Tyson said the neighbor never came across the street to tell them about any of the issues they were having with the tenants, who ultimately were evicted.

Tyson said tenants at 62 Byram Terrace don’t park in their driveway, and instead park on the street forcing him to drive around the corner to park.  He said when he asked them not to park there, they agreed not to but continued to do it anyway. Further, he said the tenants’ cars block his mailboxes and despite another pledge to stop doing that, it continues, and twice this week the mailman has declined to deliver his mail.

Tyson said he does not want the project approved and that there are several “rooming houses” on the street. He said 67 Reynolds Place has six cars on the street, and neither a driveway nor a garage. Further, he said next door, “At 58 Byram Terrace there are I believe four families in the house  – three in back  and two on the street.”

Tyson said at 71 Byram Terrace there are three cars and a “very trash filled yard.”

Tyson said residents of his 8-unit condo complex all but 3 cars park inside a garage.

Tyson said with the proposal for the three bedroom 830-g affordable apartment across the street including an additional 2 parking spots – an increase from 5 to 7 – “depending on who moves in, there could be more cars on the street and more cars blocking our mailboxes.”

Applicant’s attorney Mr. Heagney acknowledged that over the last year or so, there had been an issue with tenants in the building and that currently the basement apartment is unoccupied.

“It has not been easy for the residents in the area. Frankly, it has not been easy for the clients either, who had to bring an eviction action to get the tenants out and bring in a dumpster to clean out the apartment,” he said. “My clients are committed to providing a safe environment for all the neighborhood including the tenants they have. They make that pledge and make themselves available should any neighbors wish to contact them if there is an issue in the future.”

Heagney said the project would take place over time and two sets of tenants will be shuffled around as each unit is upgraded to meet code requirements.

Commissioner Alban said providing for the health and safety is the main mandate under 830g. She said the applicant has to address all outstanding comments – which include, most importantly, to address the safety issues and all building code violations that have been noted in the application process.

There was discussion of code requirements including sprinklers, egress windows, as well as working with the sewer department.

Alban noted the ZEO has commented there is not sufficient parking, that there are outstanding sewer department comments.

The DPW Engineering department has given no comments, however the applicant was asked to provide an exception request to engineering.

“My client is committed to being a responsible landlord and Mr. Tyson has their contact information so they can directly deal with their tenants. That has to happen whether there are two apartments or three apartments. The building code issues are resolvable.”

The commission converted the application to a preliminary site plan and a motion to move to final site plan with modifications listed above was moved by Ms. Alban, seconded by Mr. Fox approved unanimously. 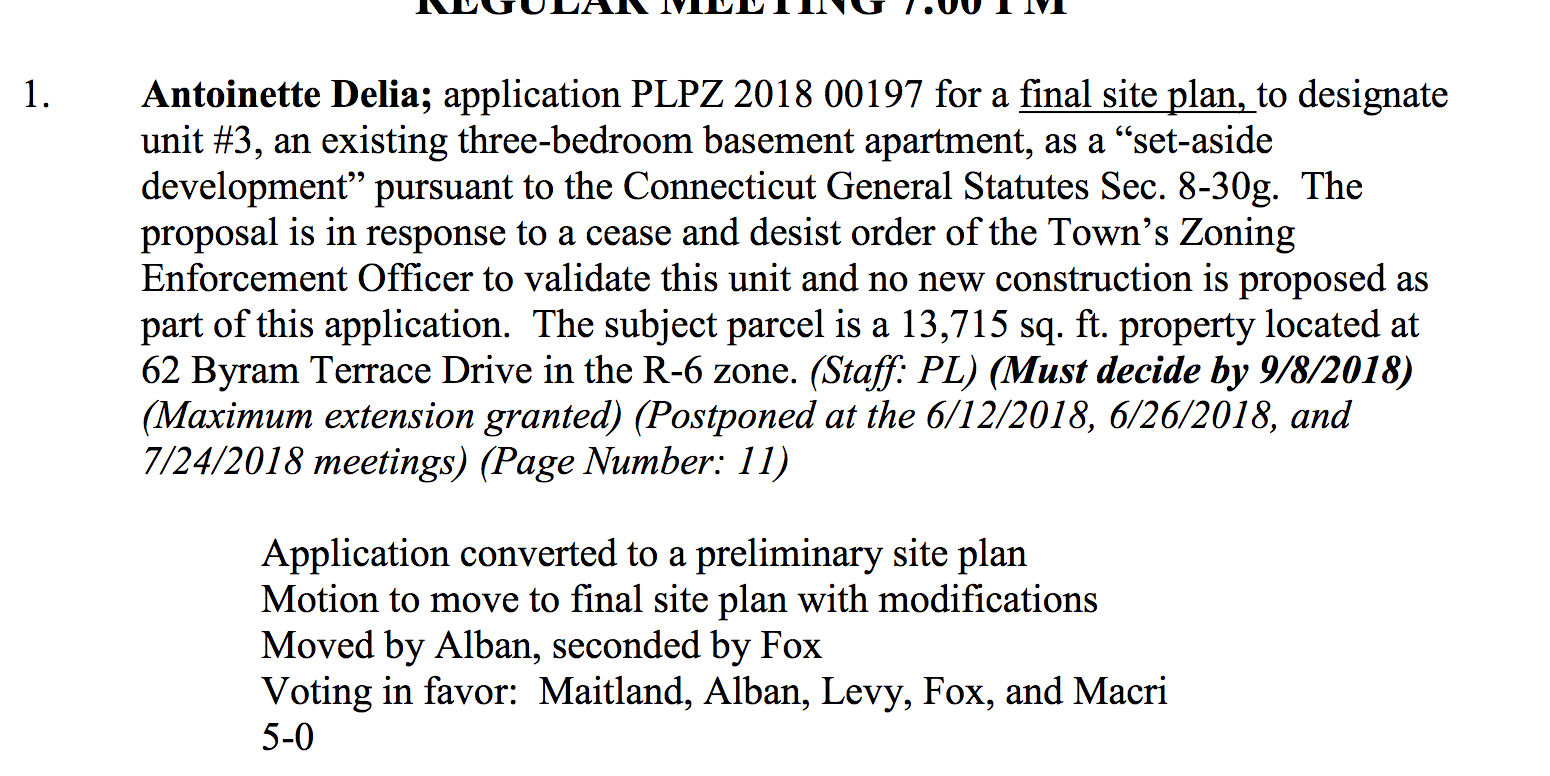