Kathleen Stowe, member of the Greenwich Board of Education was nominated unanimously during the Democratic nominating convention held on Zoom Monday night to run for State Rep in the 149th district, which includes Greenwich and parts of Stamford.

The job of State Rep for District 149 has been held for some 20 years by Republican Livvy Floren, who announced in April she would not seek another term.

Stowe was elected to the BOE in 2017 and she has pledged to serve the remainder of her term, which expires in 2021.

She is currently the Vice Chair of the BOE and serves as Chair of both the Policy Governance and Budget Committees and is the Board representative to the Parks & Recreation Field Feasibility Study.

“I have learned a lot in this role, but it is working with colleagues to build consensus regardless of political ideologies that should serve me well as I hope to advocate for us in Hartford,” she said. 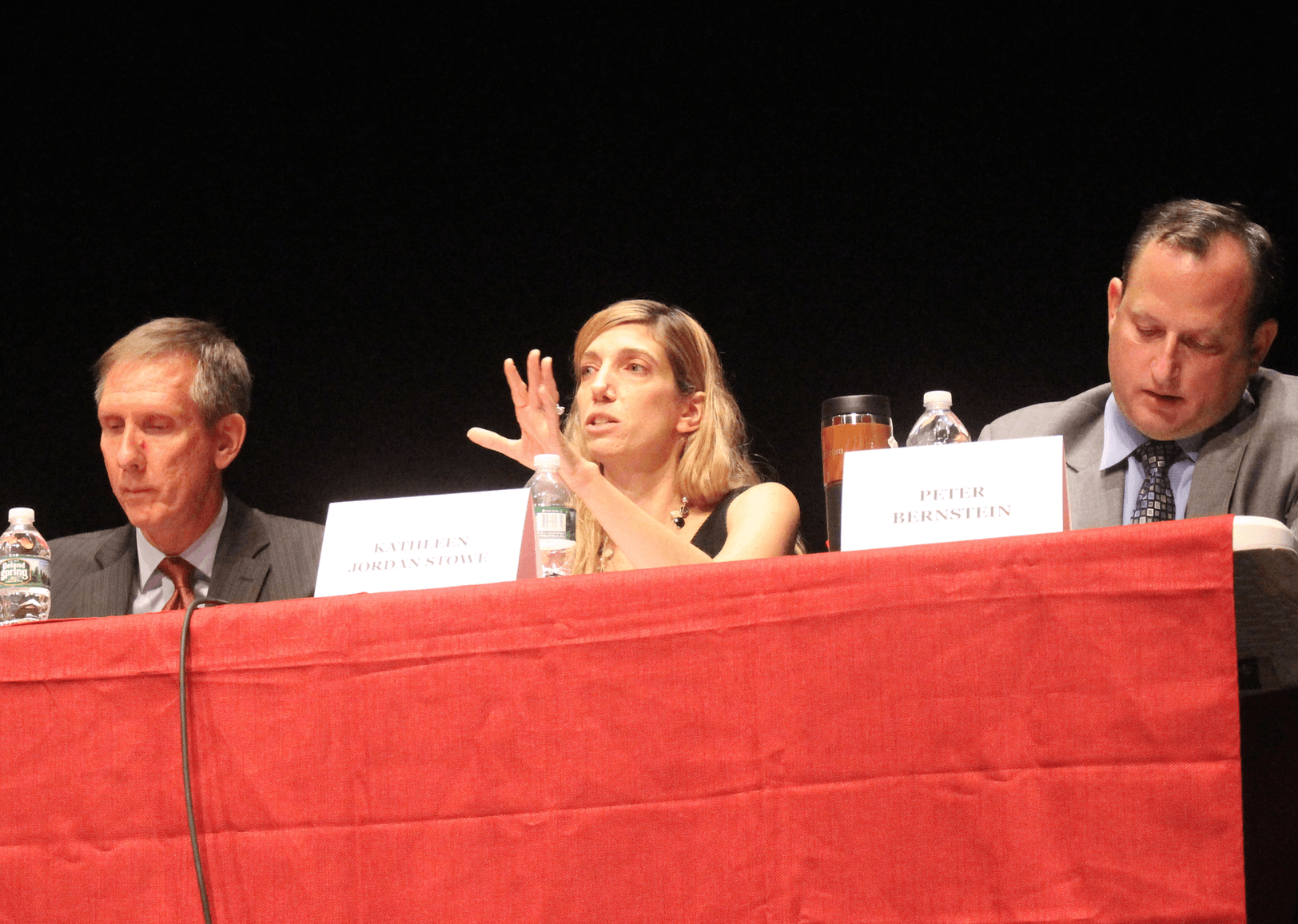 Stowe responds to a question during a candidate panel at Greenwich High School in 2017. Photo: Leslie Yager

“Livvy was a strong rep and I hope to continue to serve the 149th well,” said Stowe who was nominated by Bill Finger of Greenwich and seconded by Bob Lion of Stamford.

During the meeting, which was chaired by Josh Fedeli of Stamford, Bill Finger described Stowe as “a thoughtful, strategic and critical thinker able to work in a bi-partisan manner as she has on Board of Education.”

“Stamford is in crisis,” Mr. Lion said. “A crisis in school funding and repair, and a financial crisis brought on by Covid-19.”

Lion said Stowe’s background as member of school board and mother of children in the public school system made her a good candidate.

“Unlike her predecessor she divides her time between Greenwich and Stamford, and is probably closer to my house than downtown Greenwich,” he added. “She knows what Stamford needs, and we need her.”

Stowe said she began volunteering in Greenwich started as class parent at Round Hill Nursery School and then at Parkway School. 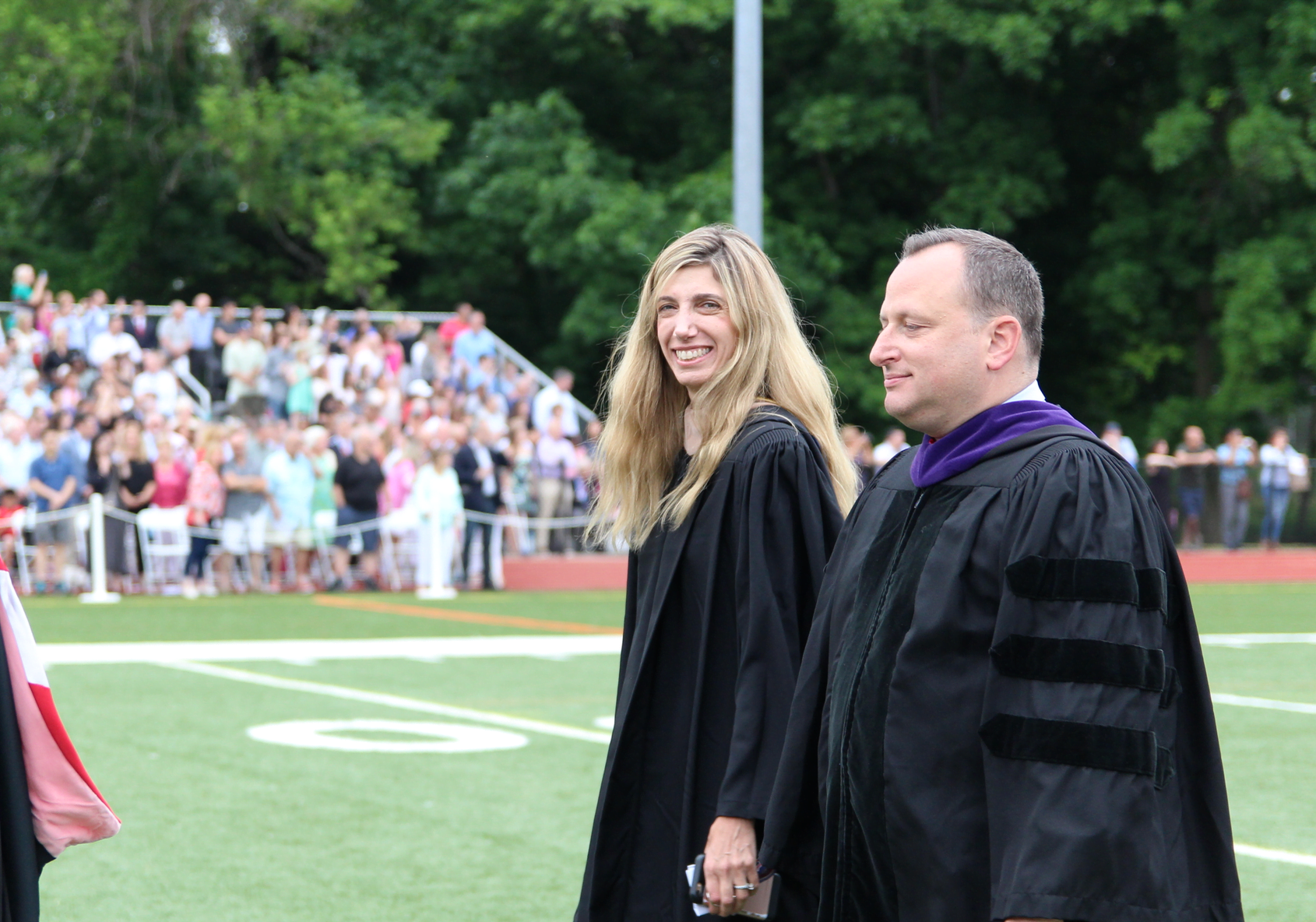 She coached T-ball and baseball, and now currently softball for Greenwich Parks & Rec.

Stowe participated in the recent drive-by protest at Town Hall in opposition to the $3 million in cuts to the school budget that passed by the Republican controlled BET in a vote along partisan lines.

“We need to support our communities by growing our economy, protecting our open spaces and enhancing our local schools, all while maintaining fiscal discipline and minimizing the tax burden to retain and attract families and corporations to Connecticut,” she said in her acceptance speech.

Stowe, who received a BS in Business Administration from Notre Dame, spent two decades working in finance, with experience in both investment banking at Citigroup and private equity with SV Investment Partners, said she gained a deep understanding of both finance and business operations, and invested in and grew multiple companies while serving on corporate boards.

She is currently the Strategic and Financial Adviser to Jordan & Jordan, (https://www.jandj.com/) a financial technology business her father founded in 1990.

Stowe said her background should prove helpful in attempting to attract and retain businesses to the region and the state.

“I am the second Jordan in Jordan & Jordan, and I have the pleasure of working with my father to grow the business,” she said on Monday. “We are a financial technology business headquartered in New York City with offices in London and Chicago.  I largely work from home, and I’m good at balancing family, work and volunteering in the community.”

Stowe said prior to Covid-19, she already worked from home frequently.

“I’ll manage my schedule accordingly,” she said.  “I have flexibility because of my role and the fact that there are 40 people there handling the day to day operations.”

Stowe, who has also served for five years on the board of the Northeast Greenwich Association, said she and her husband moved the family family to back country for its open and protected space, in addition to schools, proximity to New York City and low and predictable taxes.

Given the number of New York City residents who who have moved to Greenwich and Stamford at least temporarily due to the Covid-19 outbreak, and may eyeball the area as a permanent home, Stowe said it would be important to capitalize on a potential exodus.

“I feel like this is definitely the place to spend the pandemic. We were ahead of the curve on social distancing,” she said of back country in particular.

She summed up her priorities as growing the economy, protecting open spaces, and enhancing local schools, while maintaining fiscal discipline and minimizing the tax burden to retain and attract families and corporations to the state. 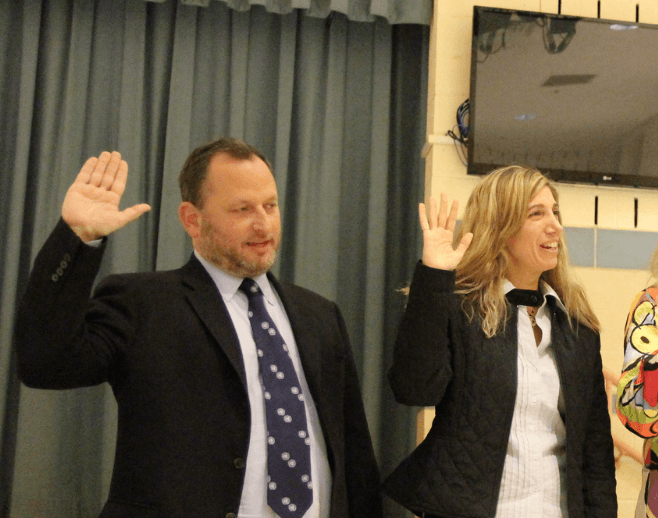 Stowe being sworn in as a member of the BOE in 2017. Photo: Leslie Yager