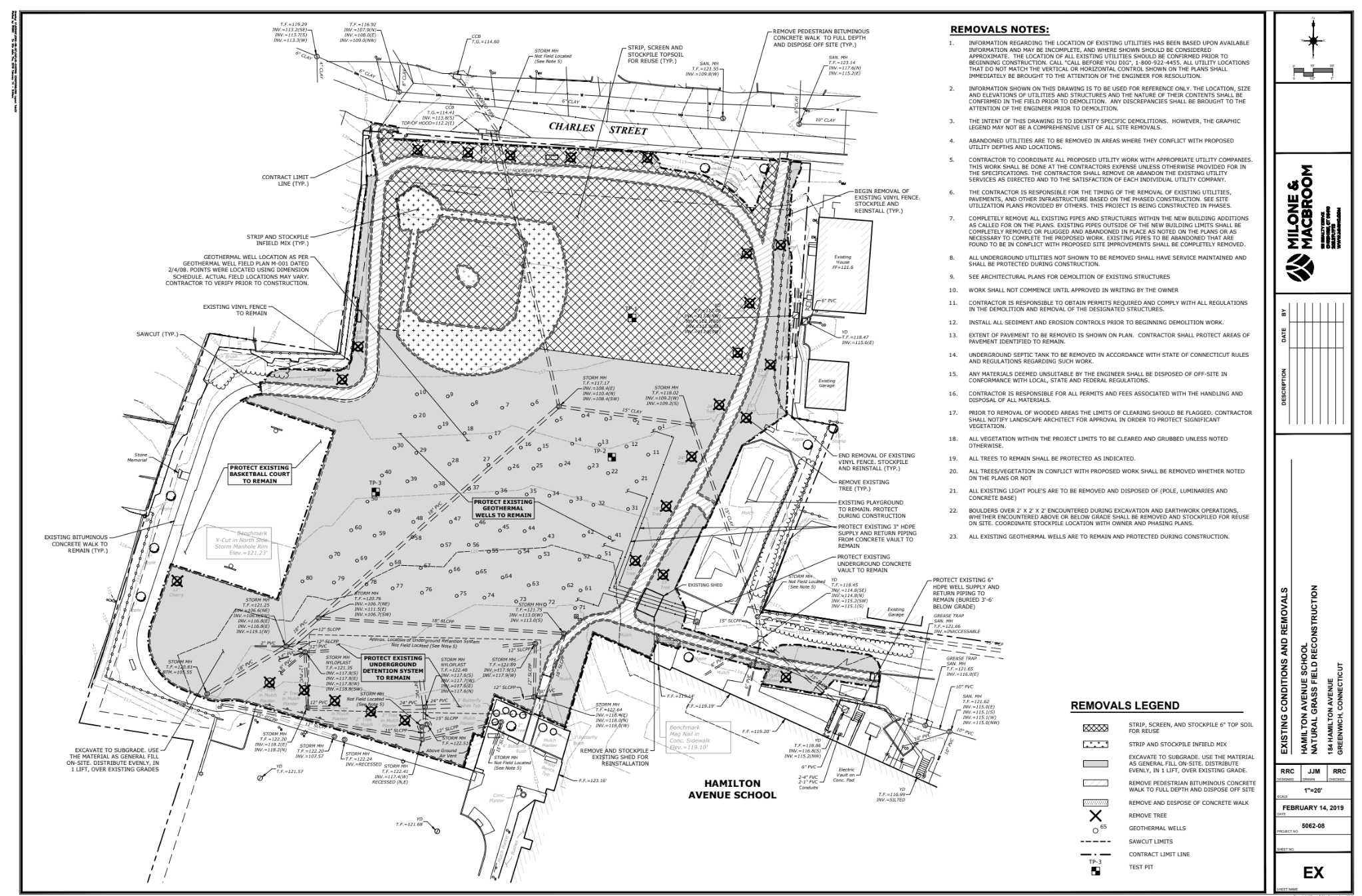 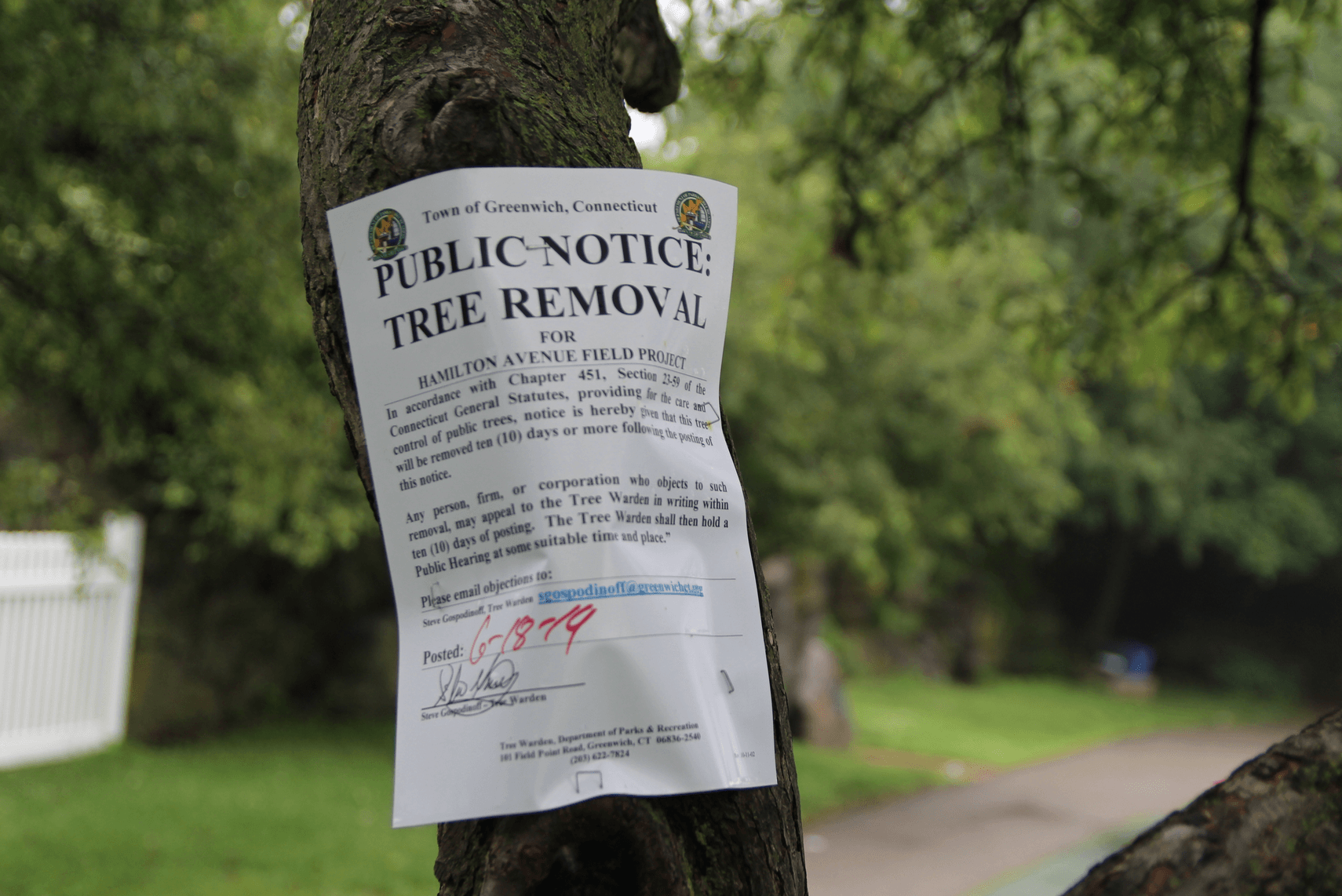 UPDATE: The Dept of Parks & Rec will hold public hearing on Tuesday, July 16 at 12:00 noon in the Town Hall Meeting room about the proposed removal of 19 trees at Hamilton Avenue School, 184 Hamilton Ave.

The meeting will be led by Steve Gospodinoff, Tree Warden for the Town of Greenwich.

The Tree Warden is part of the Dept of Parks & Rec Division of Parks & Trees.

The hearing is being held in compliance with the CT Statutes, Public Shade Trees, Chapter 451, Section 23-59. Any person, firm or corporation objecting to the removal of the trees is requested to be present.

In June, at request of the Board of Education, deputy tree warden Steve Gospodinoff posted two dozen trees for removal at Hamilton Avenue School.

He said if the school’s field improvement project changes raises the grade 18 inches the roots of the trees they will die. In fact he said that as little as 2” over the roots would kill the trees. “It shocks the trees and they’ll die,” he explained.

On Thursday Gospodinoff said the request to cut down the trees originated with the Board of Education about two weeks ago.

He said he was surprised to learn during a meeting with BOE staff including Facilities Director Dan Watson the field would be raised 18 inches and that that would kill the trees.

“I will listen to both sides,” Gospodinoff said. “It’s an opportunity for everyone to speak up and weigh in.”

For at least a decade Chickahominy residents have complained about the field, saying it is not regulation size for sports competition, is full of ditches, doesn’t drain properly, and slopes from one end of the field to the other.

About $425,000 has been budgeted for the field improvement project. 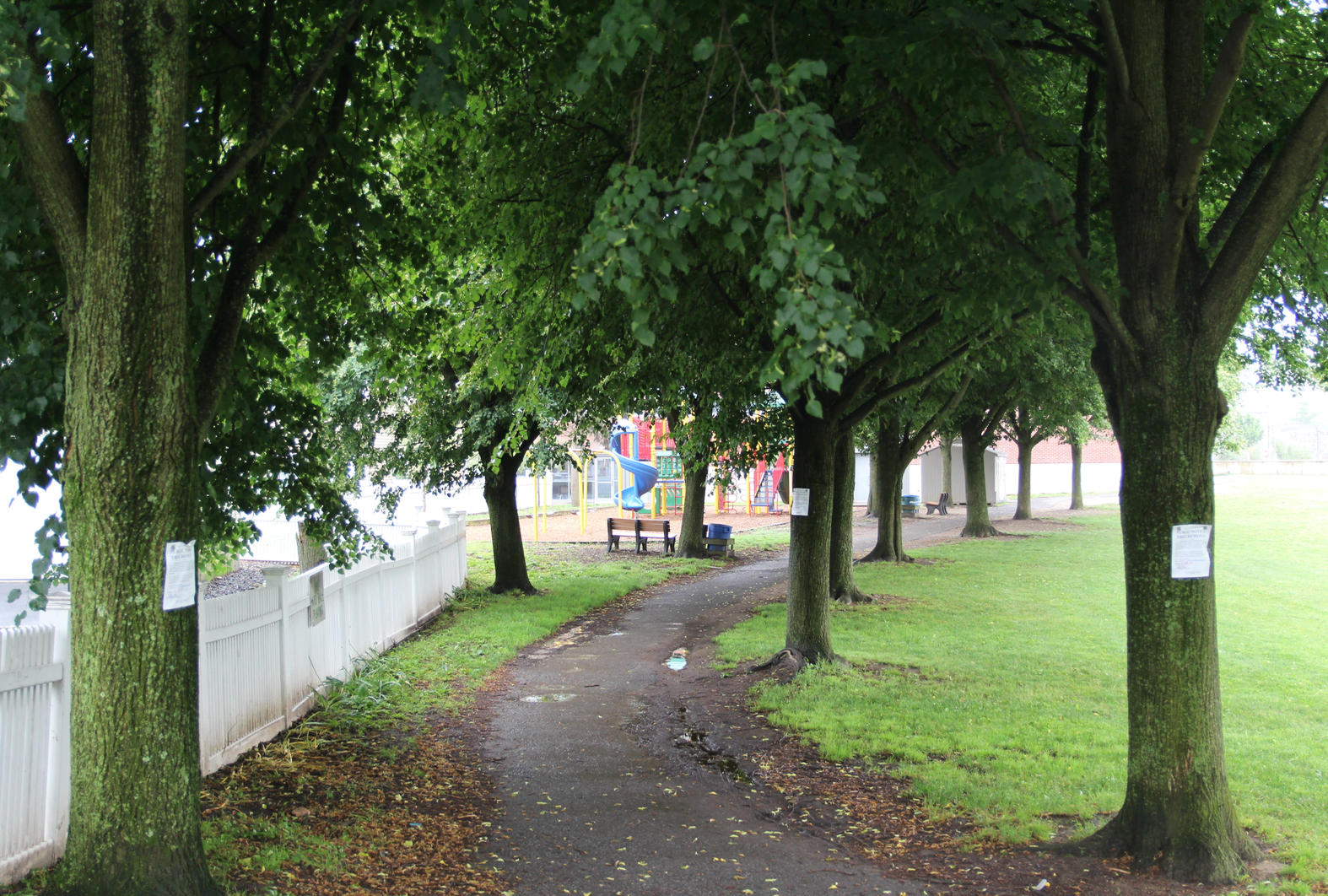 The trees posted include about a dozen Linden trees that Gospodinoff estimated are more than 50 years old.

“Back in the 1960s Linden trees were planted all throughout town,” he said adding that the trees posted include a 24″ Swamp White Oak which he recalled planting himself 25 years ago, and a big Pink Kousa Dogwood that is flowering today.

Mr. Gospodinoff said that after he posted the trees he received numerous complaints, triggering a hearing, which he will schedule for early July. (The precise date will be announced shortly.)

An email on Wednesday from The Greenwich Tree Conservancy to Gospodinoff and tree warden Greg Kramer objected to the removal of the trees.

The email said GTC has worked in partnership with the Town for over a decade to plant trees in Greenwich where they are most needed.

“The western part of town has been a major focus and we have tried to plant a higher percentage of trees there. Currently we are adding over 50 trees to the Byram community to keep with that mission,” the email said. “Removing trees at Hamilton Avenue School is antithetical to all we have been trying to accomplish. These trees should not have been posted.”

The email went on to say that the benefits of mature trees for growing children are well documented.

“Removing these mature trees should not be contemplated, the email said. “I am sure there is an appropriate plan for this playing field which would not include removing a natural resource which is so very beneficial to our school children. Since they have been posted please do schedule a hearing.”

On Friday June 21 Mr. Watson emailed a statement dated June 19 saying the 24 trees were identified by the design team of consultants Milone & MacBroom (a civil engineering and landscape architecture firm), as needing to be removed.

He said there had been no concerns expressed at earlier meetings when the project first went public.

“In order to achieve the proposed end result of a ‘flatter field,’ the fill material to be brought onto the site in order to make the field more level, would cover the base of the trees, thereby limiting their capacity to absorb water, oxygen and other elements and resulting in serious dieback or death. The plan is to remove the trees, level the field and then plant new trees.”

Mr. Watson said the process the project has gone through is typical with projects that require certain regulatory approvals and this is no exception.

Another setback confronting the Hamilton Avenue School field project stems from the inclusion of a 2,000 square feet paved play area next to the basketball court.

Watson said the Planning & Zoning commission determined that that much impervious surface exceeded  Town Drainage Manual standards, and an underground infiltration system would be required.

That led to the need for additional design and test pits to determine if the existing subsurface conditions would allow for the system.

“The results proved that the infiltration was not feasible and a redesign was needed,” Watson said, adding that P&Z suggested a waiver request be submitted as the entire site may not be supportive of a retention system.

“As the test results were not available until late April the time allowed for P&Z permit application had expired and we are now, unfortunately, forced to restart the permitting process,” Watson said. “M&M representatives are working diligently on this issue and we hope to have answers in place soon.” 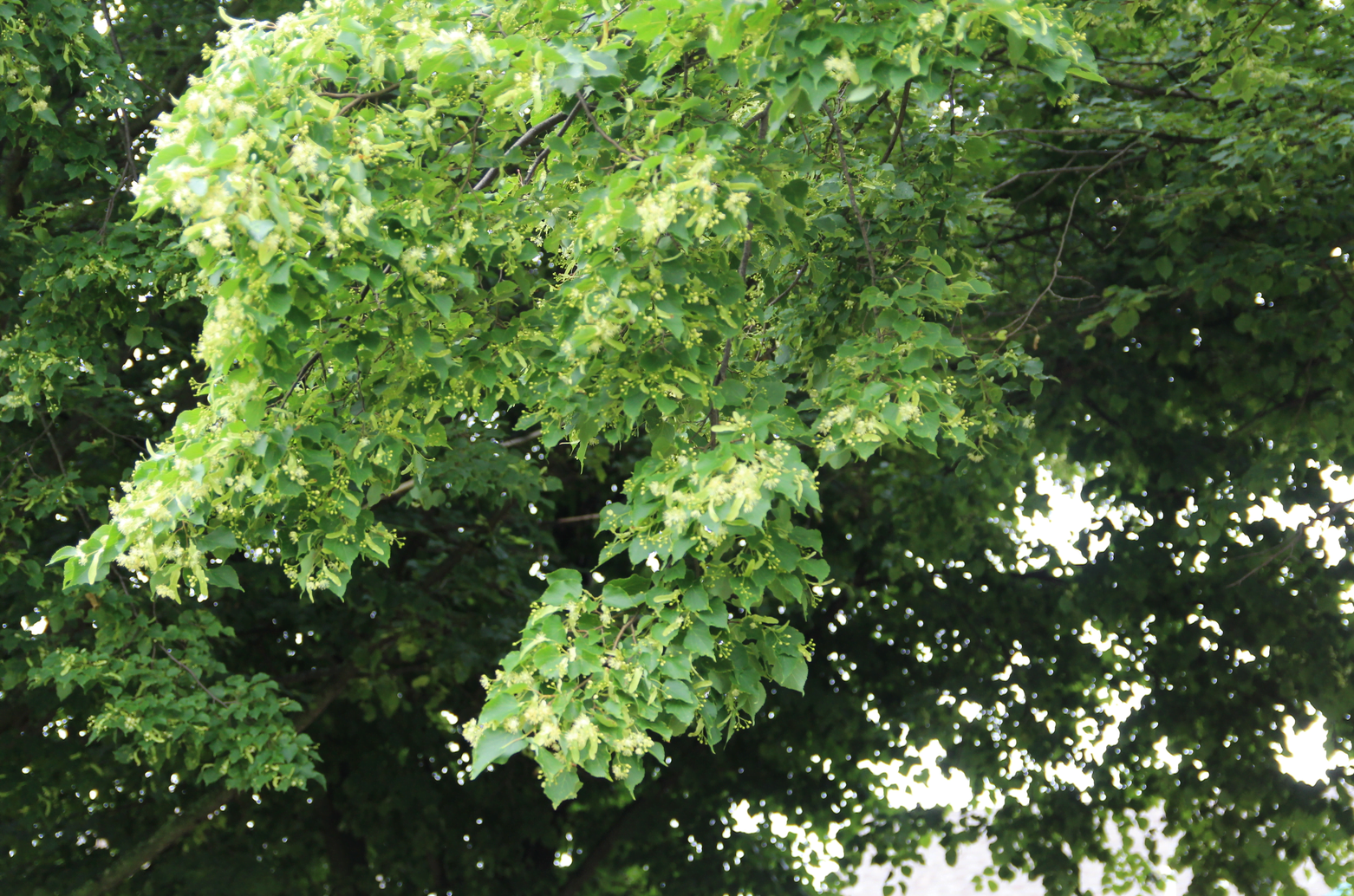 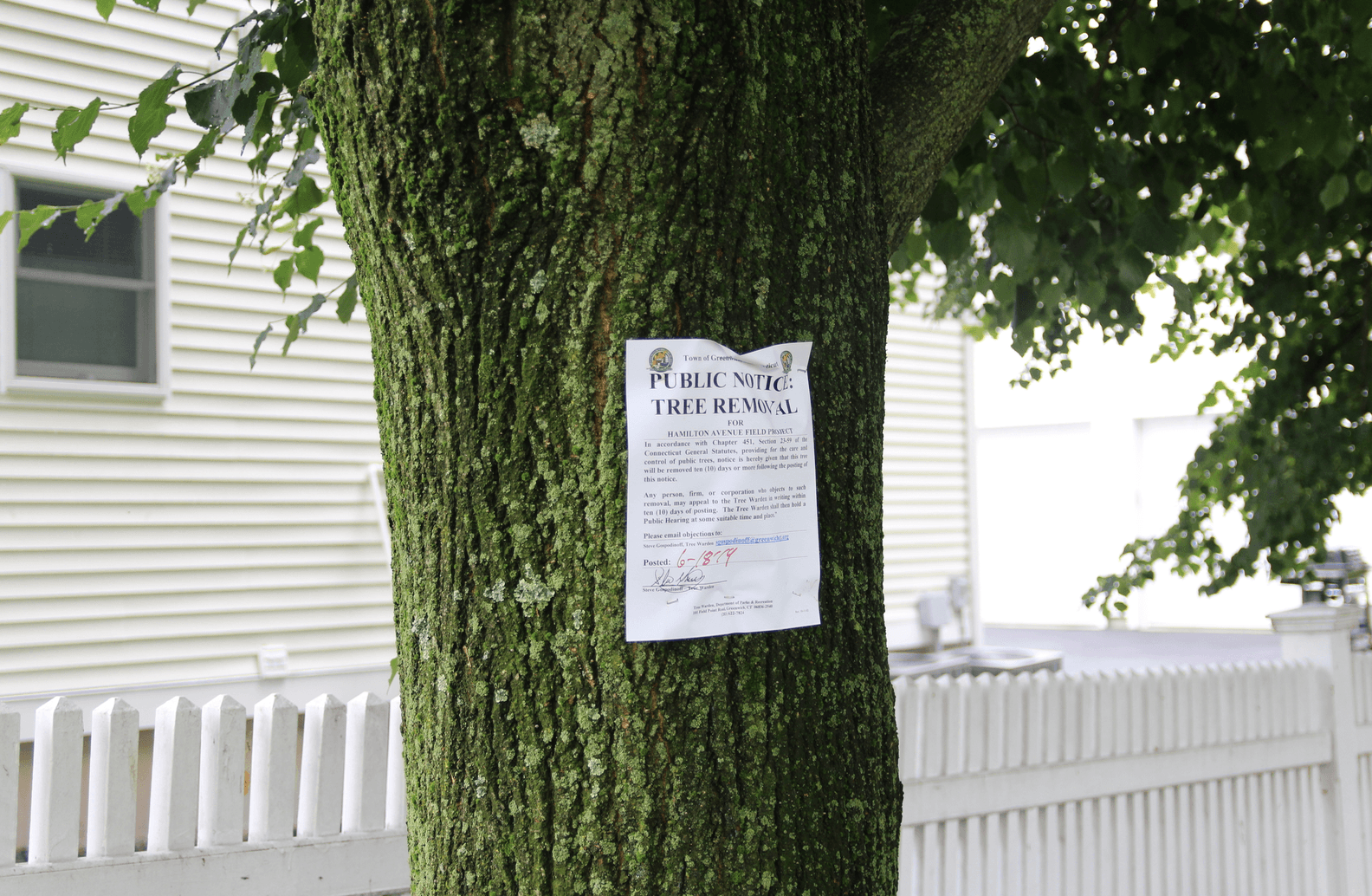 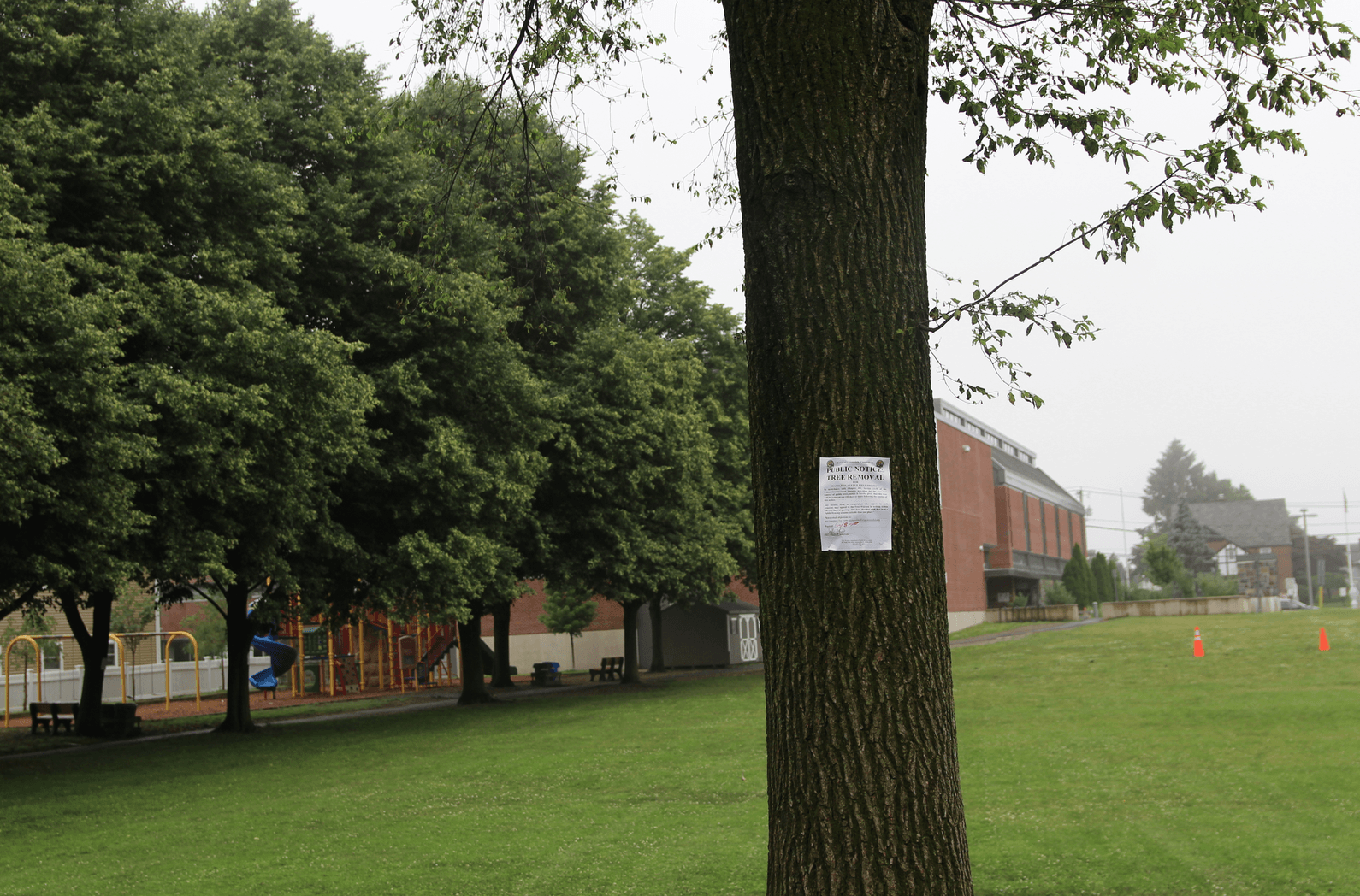 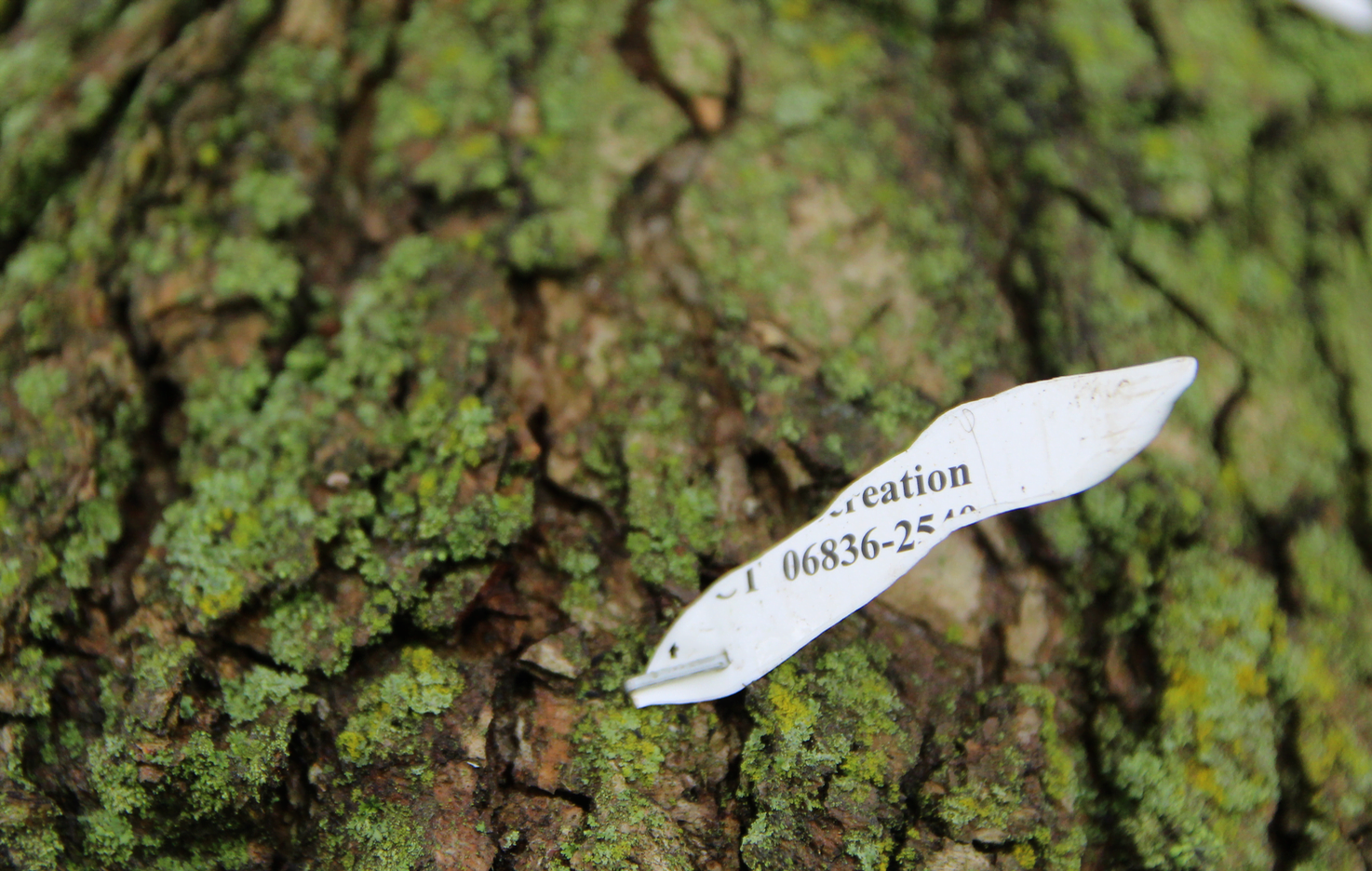 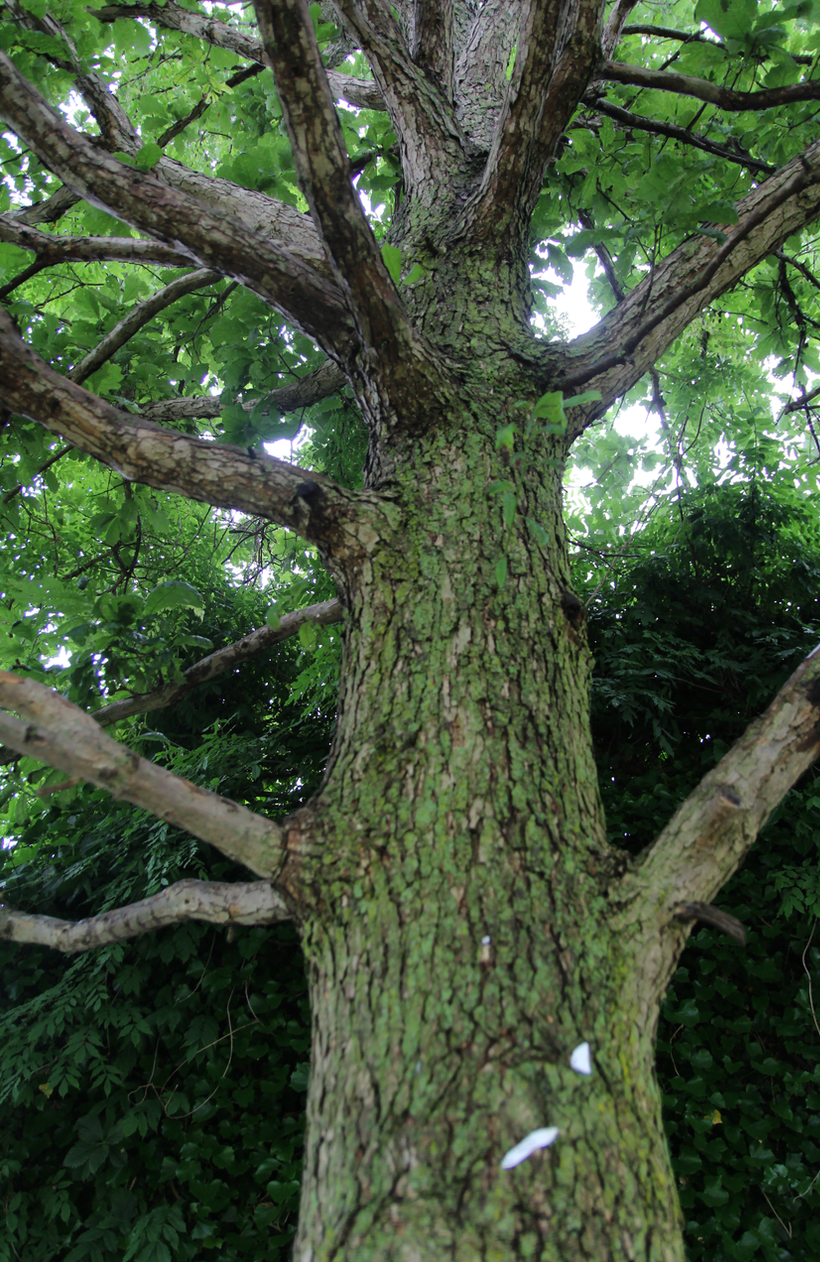 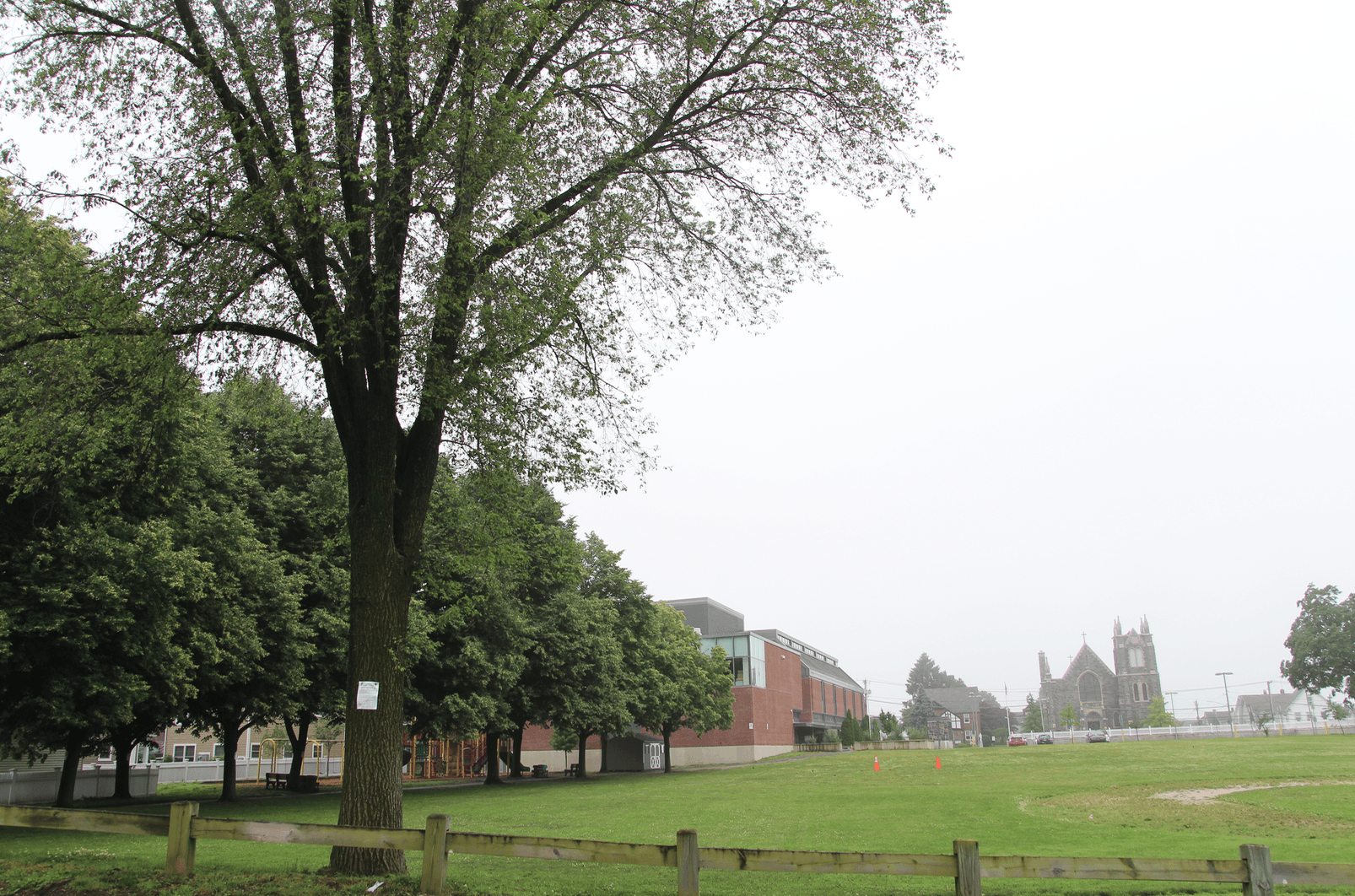 Tree in foreground and rows of Linden Trees in background are noticed for removal at Hamilton Avenue School’s field.  In the distance is St Roch Church. June 20, 2019 Photo: Leslie Yager