On Nov 8 the Greenwich Planning and Zoning commission reviewed an application from 366 West Putnam Managers LLC and 30 Columbus Avenue Managers LLC who seek to demolish the building that was formerly home to Greenwich Auto Sales and construct a two story glass showroom for Lincoln cars. 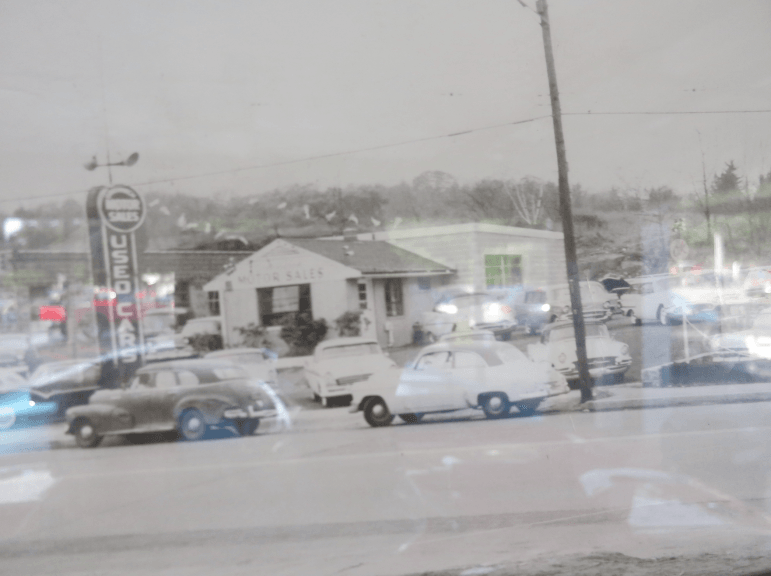 Vintage photo of Greenwich Motor Sales which hung on the office wall until summer 2018.

For decades the Caviolas sold used cars and worked as auto mechanics at the location, which is in the GB zone. It was a family affair. Patty answered the phones kept the books and John did car repairs. Customers were greeted by John’s dog Buster, though many longtime customers remember “Angel,” the office dog who lived to 16 and more than once served in lieu of ID at the bank when Patty went to make a deposit. 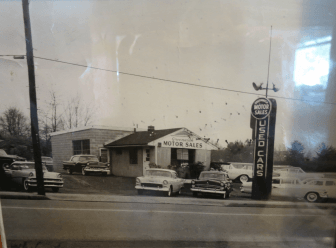 The Caviolas’ grandparents started the business after World War II. Grandmother Olga was the daughter of Russian immigrants. She cashed in war bonds and grandfather Charles bought a car to fix up. Olga did the detailing and Charles did the repairs. They sold that car and bought another. After a while they made enough to fix up two cars at a time. Patty and John’s parents started their business in Port Chester and later rented a building where the Dunkin Donuts is located at 271 West Putnam Ave.

“We help you if you have a flat tire, unlike some dealer service operations that want you to make an appointment,” Patty told GFP back in 2014. “If you’re in trouble – maybe your warning light goes on that your engine is overheating or you have a flat tire – you can just pull in and we’ll help you. You can’t drive into the gas station. All they have is a gas an a convenience store.”

But for the better part of 60 years they were at 366 West Putnam Ave, having tried to find someone to move the original home that sat on the spot. With no takers, the house was torn down.

The Caviolas closed their business at the end of August.

The applicant, Dominic Franchella and attorney Tom Heagney said the goal of the Lincoln showroom will be to provide “an effortless experience” for customers.

Intended as a ’boutique Lincoln store,’ for sales, service and detailing. Customers will be able to drop off their cars in Greenwich for service but service will be done at the Lincoln / Ford dealership on Magee Ave in Stamford.

“We hope that 100% of people take pick up and delivery. It’s all about coming to you even with test drives. We come to your office or home,” Franchella said.

There was much discussion on lighting intrusion given the building is clad in glass.

The applicant said the lighting will be on a timer and set to turn shut off outside at 7:00pm. At night the display lights will be dimmed by 75% at 7:00pm on both floors. There are exceptions for lighting around exits.  except for safety  like exit.

Mr. Franchella said all initial prep of vehicles will take place in Stamford and that vehicle transportation trucks will be stored there as well. He said that only single car carriers will come to Greenwich and unload on site.

P&Z director Katie DeLuca said she was concerned that the applicant’s rendering indicates cars would be dropped off on Columbus Ave , which she noted is very narrow and usually has a lot of cars parked on it. It’s also the location of a very busy Chicken Joe’s restaurant.

Acting P&Z chair Margarita Alban said that was important because the commission does not want vehicles being loaded or unloaded on Putnam Avenue.

Mr. Macri said asked about signage. He said the commission hears the signage is dictated by “corporate.”

“You want it really nice with high end vehicles, please don’t screw it up with signage,” he said. “Nothing lit, spinning or flashing.”

The applicant assured Mr. Macri that signage would be limited to a monument sign, and “not be in your face.”

During the day the dealer intends to park a few cars parallel to Putnam Ave but they would not remain there over night.

The applicant said they have done environmental testing and that the site will be remediated by the demolition firm as part of the demolition process. “Before we thought about preparing this submission, that was done. People in the automotive and petrochemical industry would think of those things,” Mr. Heagney said.

As for setbacks, the applicant said they received ZBA approval for a 30 ft setback versus the required 50 foot setback in the zone.

Greenwich Motor Sales had paved the entire front of the property paved and filled with used cars, but Lincoln will reduce the overall coverage of the lot.

Mr. Levy asked Mr. Franchella if he had financing on the property.

The property is actually two parcels in separate LLCS owned by the Caviola family and Mr. Franchella will have a long term lease.

There was some discussion about curb cuts on Josephine Evaristo and Columbus Ave and removal of a “Charlie Brown” tree and creating screening between the showroom and the residential neighborhood adjacent. 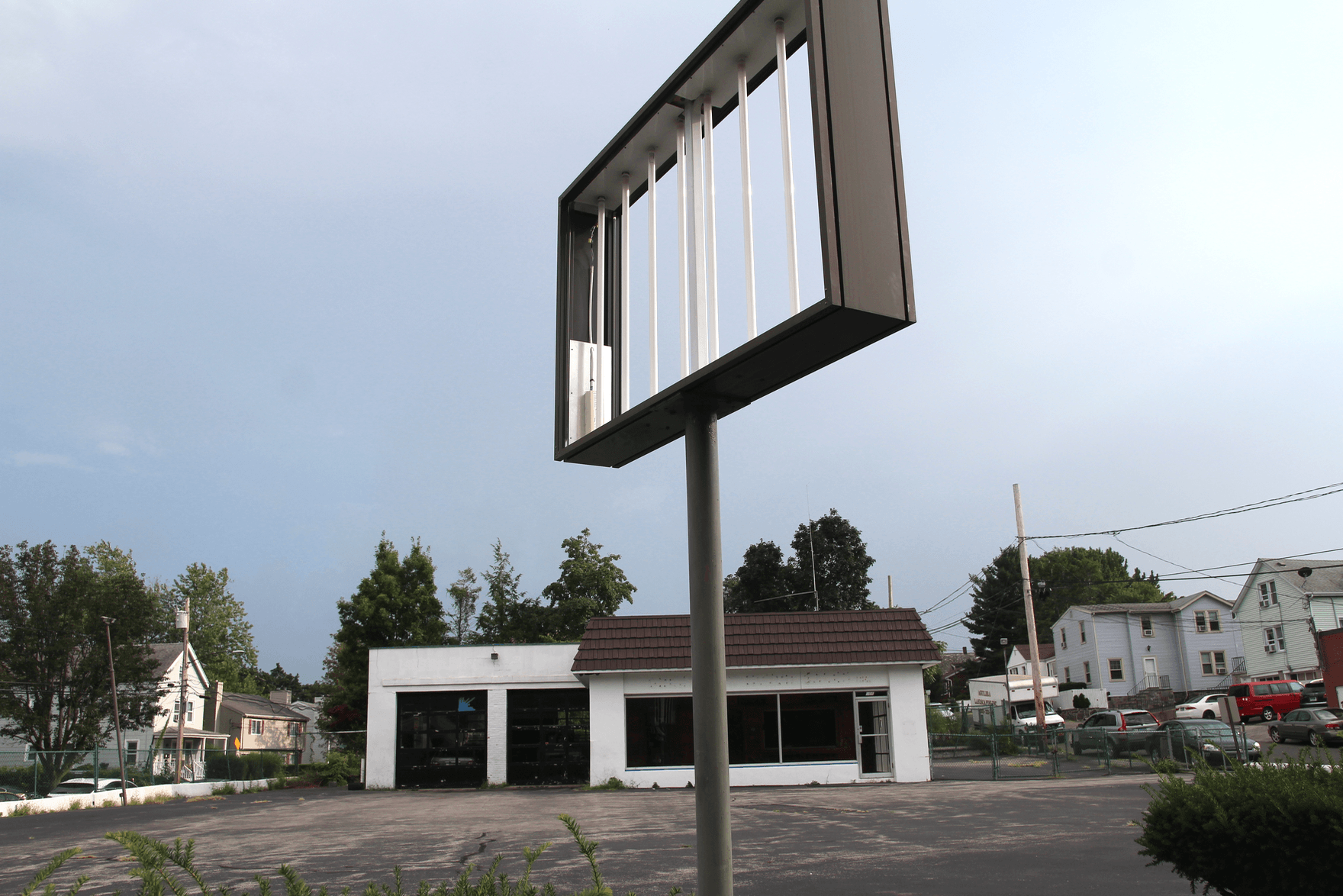 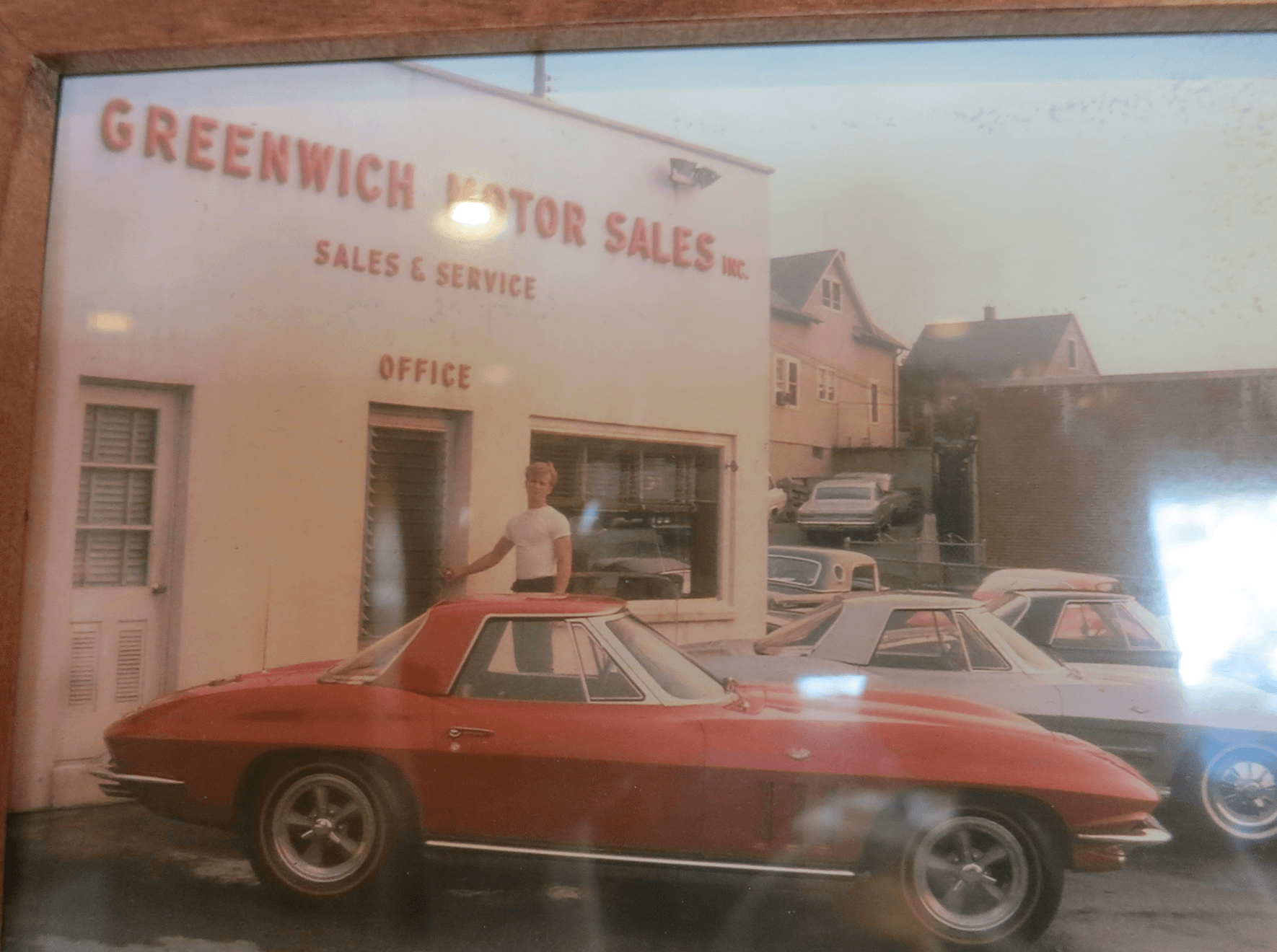 An early photo of Greenwich Motor Sales hung on the wall of the business until recently. 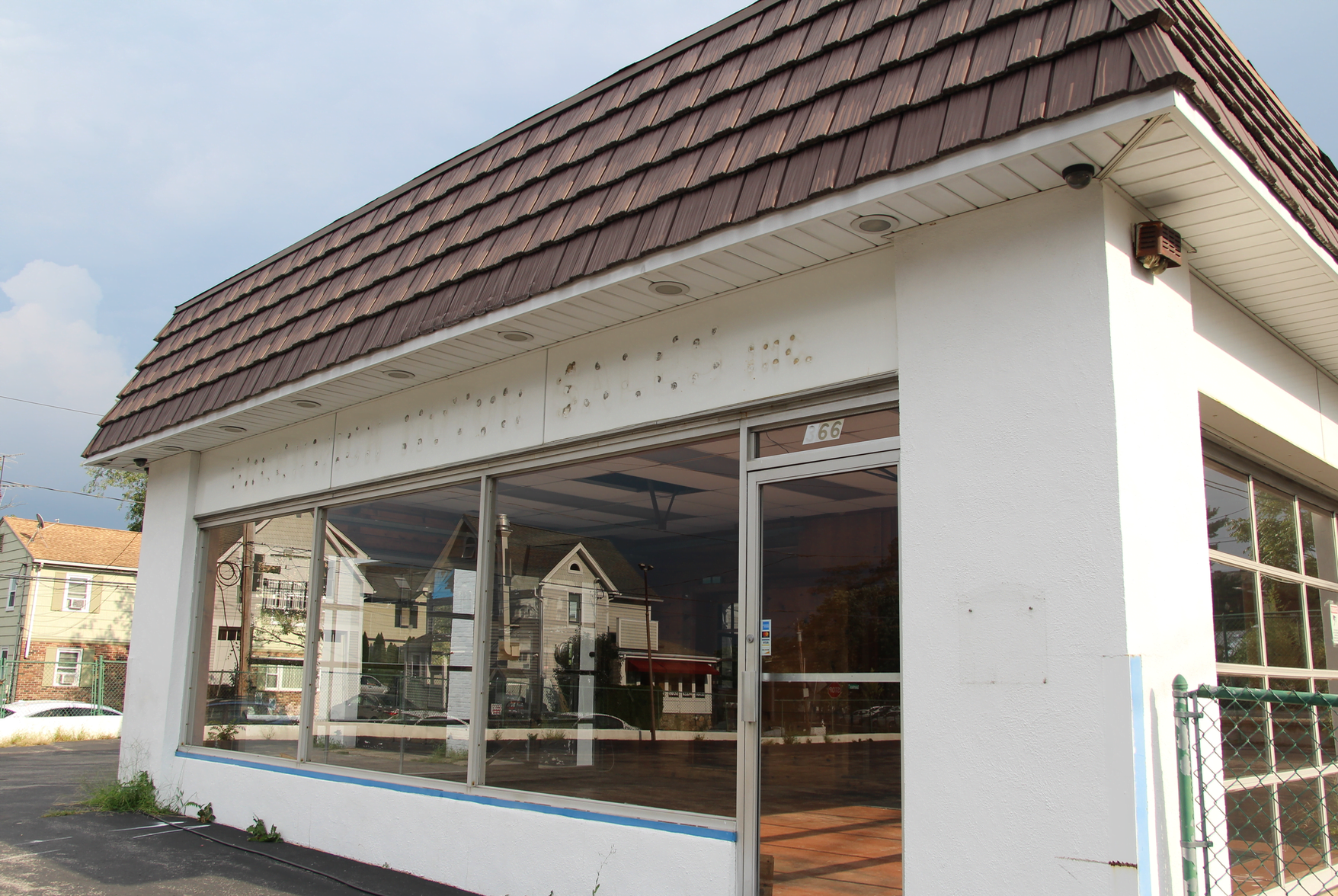