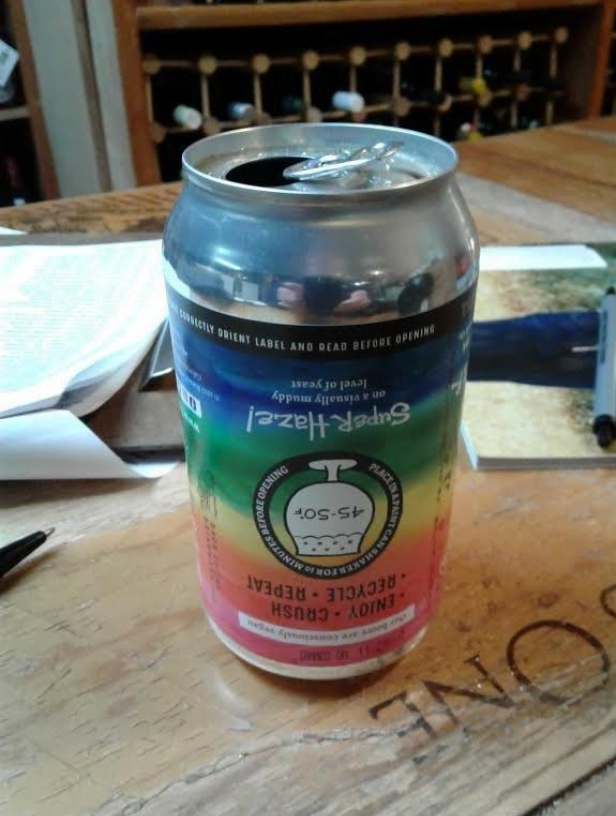 Some fish have swim bladders and some do not. Swim bladders allow a fish to maintain buoyancy, filling and emptying as needed, using a combination of gases that typically includes oxygen, nitrogen and carbon dioxide. Whether a fish can sit in a current or must swim to stay alive often depends on whether it has a swim bladder. Sharks do not have swim bladders; that is one of the reasons they must move constantly.

There is a new beer at Glenville Wine & Spirits called Trinity Super Hazel. It is made by Trinity Brewhouse, in Providence, Rhode Island. Its vegan claim is oddly worded “Our Beers are Consciously Vegan,” but probably legit, considering how easy it is to produce a vegan beer.

In fact, I kind of rolled my eyes at the claim at first, thinking “yeah, OK, but how do you taste, show-off?” Pretty good, as it turns out. An IPA with oomph. More like a Double-IPA. The hops did not blanch my teeth; the beer has strong body; it tastes quite complex. I like it.

But is Trinity Super Hazel’s vegan claim on the up-and-up? Is a vegan beer really so easy to produce?

To make a brew, you require only malt, hops, water and yeast; the rest is icing on the cake. Three of these are plant material; the fourth is neutral. German beers famously follow the Reinheitsgebot, which allows only those four ingredients, so German beers are vegan by law.

That would seem to end the discussion: just follow the Reinheitsgebot, and all will be well. Except that over the centuries, consumers have proven increasingly resistant to turbid beer. Turbid beer is caused by the spent yeast suspended in the beer. Consumers don’t like cloudy beer. They like clean beer. If a brewer does not remove the suspended yeast, he does not sell his beer.

When breweries served small populations in local areas, they could afford the time and expense of waiting on the yeast. But large-scale commercial brewing made that problematic.

Belgian Brewers (Recklessly? Heroically?) allowed the spent yeasts to stay in many of the beers they sold to the public. German Brewers took the time to allow yeast to settle, in cold vats, under the Lager method of producing beer (the cold makes yeast precipitate faster).

Guinness is the most famous example of a Brewer that uses dried, powdered swim bladders in order to take yeast out much faster than it would naturally precipitate. Most UK and Irish breweries resorted to Isinglass because these countries historically relied on it as a preserver of, among other things, eggs. Other Brewers use gelatin, egg whites, or a clay called Bentonite. Modern brewers who have enough capital at their disposal use expensive centrifuges to spin out the yeast.

Isinglass is still the fastest and least intrusive yeast-precipitator available. It is a form of collagen, similar to the collagen that is harvested from cow ankles for food and medical uses. Its molecular structure is helical; this allows Isinglass to bind much more effectively to spent yeast than gelatin, egg whites or clay. And Isinglass does not sacrifice flavor, as centrifuges do, because it binds so specifically to the yeast and little else An added bonus of Isinglass is that in combination with the spent yeast, it creates a fairly solid mass at the bottom of a barrel of beer. It can be removed quite easily, and presto! Clear beer.

But Isinglass has a serious public-relations problem, in addition to its non-vegan status. Most people’s experience with fish guts goes back to cleaning a bloody mess after catching a fish, or watching the Fishmonger clean it for them. And then there is the onomatopoeia of “glass.” Is that broken glass? Does the glass cut up the guts even more? Is there glass in my beer?? Is the BLOODY MESS in my beer???

No. The swim bladder is actually the cleanest internal organ in a fish. It is filled only with atmospheric gases, and when it is harvested, the minute amount of blood around it is quickly cleaned off. The bladder is allowed to dry, then it is crushed into a powder. When it combines with the yeast, tiny amounts may stay in the beer, but these add up to minute parts per million. This does not make it any less appealing to Vegans, of course, but Isinglass’s reputation is perhaps unduly besmirched by its unfortunate name and imaginative associations.

So… let’s say you want flavorful beer that doesn’t use animal products like collagen/Isinglass, gelatin, egg whites, or some lab-created agents, like “Polyclar.” These days, you can make your own beer, and wait the yeast out as it settles; or you can drink centrifuged beer; or you can simply drink unfined, unfiltered beer.

Unfiltered beer, like our friend Trinity Super Hazel, is still fairly free of suspended yeast. Drinking the yeast is usually not a problem for most people, though if you are susceptible to headaches or worse, you should probably let your beer sit for 10 minutes or so. If worse, you should discontinue drinking unfined, unfiltered beers.

Of course, the advantage of unfined beer is that it is just so much more flavorful, like the difference between Thanksgiving turkey or Christmas ham and the nitrate-filled slices at your local deli. Or the difference between July tomatoes grown on your vine and the rock-hard, watery, green things one gets at the supermarket.

Back to Trinity’s claim… Eye-rolling? A little. But also an important statement for those Vegans who still want to enjoy their beer without the nagging doubt that they are also sucking down fish guts…

Francois Steichen has 13 years’ experience in the wine, spirits, beer & cider industry. He writes on these subjects for publication as well as for commercial copy. Francois holds the Diploma in Wine & Spirits, the gold standard in wine education. He also works at Glenville Wine & Spirits, with the best team of retail wine professionals in Greenwich… and perhaps the entire Nutmeg State.