Many concerns have been expressed by neighbors who have opposed the building of a synagogue at 92 Orchard St. Cos Cob by Greenwich Reform Synagogue, non residential development, parking, traffic, noise, does not conform to the Plan of Conservation and Development and various other concerns voiced at town agency meetings.

Why I have opposed the synagogue and will continue to voice my opposition is that the lives of Tony and Barbara Lovallo have been greatly impacted.

I have known Tony and Barbara for over thirty years. Tony and I first meet when I joined the Cos Cob Fire Police Patrol as a volunteer fire policeman. We each actively served our community in this position for over twenty years as a way in helping our neighbors when in need.

Tony and Barbara lived many years in rented housing and finally were able to purchase their dream home in 1970 at 90 Orchard St. Over the many decades of ownership they have configured their home to their needs and liking. 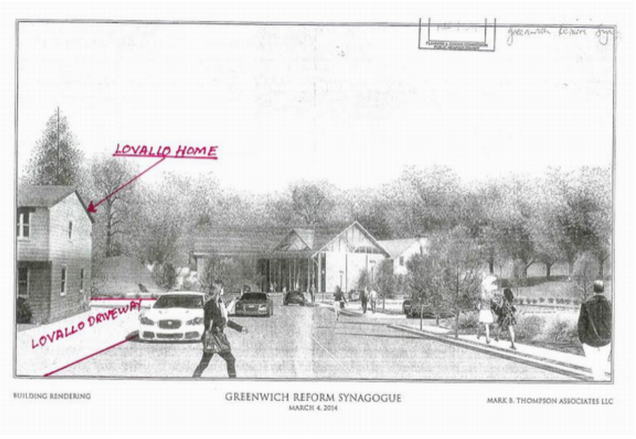 Can you place yourself in their shoes when Greenwich Reform Synagogue made the announcement that they were going to build a synagogue right next to their property and home. Can you imagine the devastation they felt after spending many years in their neighborhood to have this thrust upon them.

It appears that Greenwich Reform Synagogue didn’t have any concern on the impact they would have on the lives of Tony and Barbara who are in their 70’s. Are Tony and Barbara as some have commented “just collateral damage”, “they are an elderly couple what difference does it make?”.

There is also the question of the future expansion into the neighborhood by the synagogue onto other properties they currently own and the acquisition of additional properties that will further impact the community.

The late Selectman Dave Theis at the July 11, 2014 Zoning Board of Appeals meeting commented, “So I think what we should be doing here, with all due respect to everybody, is tread very lightly on issues that impact the nature and character of our traditional neighborhoods because once they’re gone, they’re gone. They don’t come back”.

It appears that Greenwich Reform Synagogue just didn’t understand why the community opposed the building of the synagogue. The neighbors were trying to protect and preserve their community that they have enjoyed for many years. A community that was left to them by past generations and should be protected for future generations. It wasn’t because it was a synagogue but that it was a non-residential development. The opposition would have been the same for any other non-residential development at 92 Orchard St.

Because of not understanding the community wanting to preserve their neighborhood, those who oppose the non-residential development are being characterized as anti-Semetic. It is easy to use this tactic to characterize and defame those who oppose the building of the synagogue when in truth it has always been the negative impact on the residential neighborhood and especially on lives of Tony and Barbara.

A comment by a neighbor “Do the members of the Greenwich Reform Synagogue realize that they have written their own legacy by forcing themselves into a residential neighborhood? The legacy they have written is that the synagogue they will build at 92 Orchard St will be looked on as a memorial to the destruction of the character of a residential neighborhood and will bear that stigma for generations to come.”