Two decades ago, Boston Harbor was widely considered the dirtiest harbor in America. Sewage and pollution from local industry made it unsafe to fish or swim in the harbor or the Charles River.

But the Clean Water Act, passed in 1972 did what it was intended to do and spurred a cleanup that has made Boston Harbor one of the most visited places in New England, and one of the top spots for recreation. 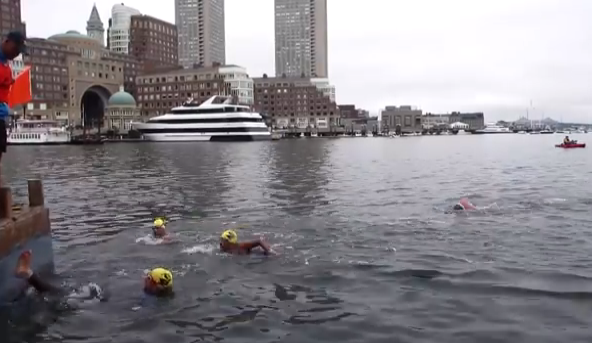 Swimmers in a cleaned up Boston Harbor. Screenshot, US EPA video.

We know that clean water is central to public health. But we also have seen that clean waterways are critical to our region’s economy. Our communities, schools, businesses, and farms need clean water to survive and thrive. A cleaner Boston Harbor increased the value of local property, encouraged more shipping, and created more jobs. In 2012, more than 50,000 jobs in Boston were tied to port activity — from cargo and seafood processing to cruises and harbor tours.

Over the decades we have learned that the Clean Water Act isn’t just an environmental success, it’s an economic triumph. By protecting New England’s waterways, by cleaning our water resources, we have also succeeded in expanding the region’s economy.

New England is blessed with a diversity of lakes, ponds, rivers, streams, wetlands, and some of the most beautiful coastal marshes and beaches in the country. Protecting New England’s waters with the Clean Water Act helps preserve this region’s natural heritage and is vital to our health, safety, and quality of life. New England’s headwater streams and wetlands are both ecologically sensitive and particularly valuable, providing clear, cold water that support a diverse variety of aquatic life and wildlife.  It is vital to protect our headwaters in order to also protect the downstream lakes, ponds and streams that provide drinking water. About half of New England’s population depends upon these water sources for drinking water. Many of the largest drinking water systems in New England use these surface water supplies to provide water, including the systems serving Boston, Hartford, Nashua, Providence, Burlington and Portland.

Across New England, state wetland laws have ensured that all of our waterways, including wetlands and streams, are protected from pollution. Unfortunately, the same is not true across the nation. Nearly two-thirds of our nation’s streams and millions of acres of wetlands still don’t have clear protection from pollution under the Clean Water Act.

To address this issue, EPA and the Army Corps of Engineers in March proposed that a new rule be written into the Clean Water Act that specifically would protect those streams and wetlands vital to downstream water quality.

The public is invited to comment on this rule proposal until Oct. 20, and public input will help us reach a stronger final rule. We encourage you to watch this video to see how much the Clean Water Act has meant to Boston and its economy.

In New England, we are proud to live in a regional of the country where state and federal laws combine to protect our waterways so they can play an important part in create a safer, cleaner and more economically robust region. And we hope you will agree that the new rules are important so that communities across the nation enjoy the health and economic benefits of clean water.

To learn more on the proposal to ensure that the Clean Waters Act protects upland streams and tributaries.

“The problem right now is there is no plan. The POCD has no teeth and dredging is considered a four letter word by green lunatics. What we’ve done by paving and piping is speed up the the insertion of particles from silt to rocks.” – Peter Alexander, Greenwich CT Landscape Architect