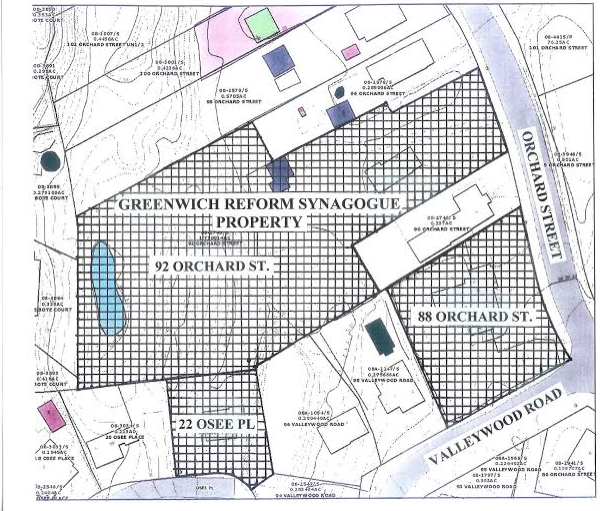 In an a letter to the editor in Greenwich Post’s Oct. 23, 2014 issue titled, “Post needs to be more accurate in reporting about synagogue,” the writer, a member of Greenwich Reform Synagogue (GRS), takes issue with the Greenwich Post’s use of the phrase “in an otherwise residential neighborhood,” specifically the word “otherwise.”

The letter writer’s issue is that Orchard Street, near the location where GRS is going to build their synagogue, is not a “otherwise” residential neighborhood. He lists four reasons that “otherwise” is misleading: Pomerance Park, Central Middle School, Greenwich Baptist Church and Rinaldi’s.

Let’s look at the background of these four properties.

Pomerance Park, prior to the Town of Greenwich wisely purchasing the property for a park it had been for well over 100 years residential property. From the outside one cannot tell if it is a park or a large residential estate.

The building occupied by Rinaldi’s was built prior to zoning regulations prohibiting commercial buildings/businesses in residential zones. There is no record in the town archives of when the building was built. It is know that the property was divided up into lots in 1905 and the houses in the immediate area were built around 1910. Originally it was a grocery store established for use by the local neighborhood and evolved into what we see today.

Central Middle School (CMS) is located on 23 acres that the Board of Education (BOE) purchased in 1955 for $98,000. When the BOE was looking for property to build CMS (then know as Central Junior High) it needed a large piece of property to meet the necessary requirements to establish a school. Did the BOE take property by eminent domain or cobbled together property through a lot line revision as Greenwich Reform Synagogue did? The answer is no. The 23 acres that was purchased by the BOE was part of the property owned by the Wiley family and used for the Blythewood Sanitarium.

Greenwich Baptist Church (GBC) purchased the four acres it occupies from the Small Business Administration (SBA) in 1965 for $55,000.

The SBA acquired the property through a USA law suit against the Wiley family for defaulting on taxes and a loan. At the time GBC purchased the property it contained the Blythewood Sanitarium chapel, built in 1940, that GBC used until they built their current church building in 1970.

In 2008 the Greenwich Baptist Church built two residential housing units on their four acres which increased the residential character of the neighborhood.

So the history of these “otherwise” properties goes back many, many decades as the neighborhood evolved into what we see today. There are 41 residential units from Sinawoy Road to and including Indian Rock Lane and Ponderosa Drive. Would you not call this “in an otherwise residential neighborhood”.

Is the writer implying because of the existence of these four non residential properties that the building of a synagogue by the Greenwich Reform Synagogue at 92 Orchard Street is OK in further reducing the “otherwise” residential character of the neighborhood?