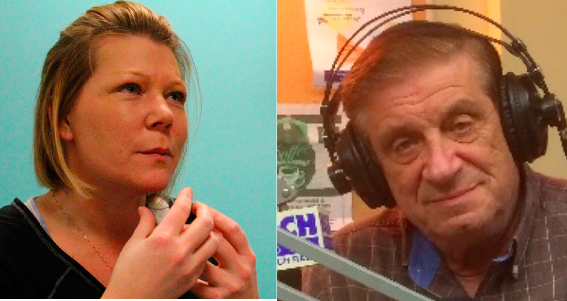 While I agree with Rutgers that in Trump we’re witnessing bigotry, misogyny and xenophobia, she omitted Sam Romeo, the chair of Greenwich’s Housing Authority board, from her list of Trump supporters.

Romeo, on his March 17th WGCH 1490 radio show “Greenwich Matters” blurted out a doozy as he attempted to praise a heroic act by Greenwich Police Officer Heustis who pulled two babies from the frigid water at Eagle Pond.

“He saved the lives of probably three, because if anything happened to the two kids, the mother would have been choked to death by the father,” Romeo said. (The podcast is online on the WGCH website at 5 minutes 34 seconds.)

In Greenwich, where domestic violence is a serious problem, to make a joke of choking a wife to death is distasteful as best.

I first wondered about Romeo back in 2014 when I called his radio show to question whether Armstrong Court was contaminated. I have long wondered whether the public housing complex is contaminated, or whether as he insists, it is “green and clean.” Armstrong Court, like Booth Court where I live, are both adjacent to the former incinerator that burnt everything from paint to pesticides.

During the time of this call, my son had lead poisoning and I was in remission from cancer. I’ve always suspected the neighborhood is polluted given the death toll here from cancer. Romeo asked me on the air, “Don’t you feel guilty your son has lead poisoning?”

I was so shocked. Afterward, I continued to listen to his radio show to see if it was just me he attacked, or whether it was a pattern.

Over time, Mr. Romeo racked up several blurts like the one on Jan 8, 2015, when he asserted that Eric Garner died of asthma, not a choke hold.

Of the group called the “Hedgeclippers,” a group of mostly teachers, social workers and psychologists from New York City – mostly minorities –  who had permission from Greenwich Police to walk through Belle Haven in the pouring rain, to protest Paul Tudor Jones, Romeo declared on Jan 8, 2015, “They just wanted a free sandwich.”

Another observation that had me shaking my head was on Jan. 22, 2015 when he weighed in on the topic of abortion. “I think it’s racist. They’re killing a lot of black babies. I think they should stop those abortions on these African-American babies. They’re wiping out their lives. It’s the Democratic party supporting it!”

Fast forward to this March 17 when Mr. Romeo, the self-described Rain Maker for those in public housing said, “Trump is my guy.”

So, Alma, please next time you go on a witch hunt, don’t skip your friends.