Also, it was attorney Tom Cassone who described his clients behavior as obnoxious, not Judge Karazin.  “There is no indication of physicality,” he said, though he did describe his clients’ behaviors as “obnoxious.”

There’s much confusion over the upcoming Board of Education election and voters can’t be blamed for losing track of the tactics and ploys of certain candidates.

Last month we saw signs at the town dump that read “Democrats vote for Bernstein,” “Republicans vote for Republicans.” (Peter Bernstein is a Republican BOE incumbent who was passed over for endorsement by the RTC in favor of newcomer Jason Auerbach (R), but successfully petitioned his way onto the ballot, making the race a competitive one.

Mr. Auerbach was alleged to have physically intimidated Mr. Bernstein and two women who were helping him collect signatures, deliberately confused potential voters with his petition for support of charter change.

Then we saw Mr. Auerbach’s son toting a huge sign at Tod’s Point that read “Bernstein now? He’s for choice?” a reference to charter change, which Auerbach described as his “signature issue.” The beach caretaker observed that the ploy was annoying sunbathers, and, unfortunately, told Mr. Bernstein not to circulate his petition, penalizing him for Auerbach’s antics when he had only a matter of days to obtain 637 signatures of registered Republican voters.

And let’s not forget about the stunt at the Riverside train station where Auerbach, accompanied by BOE chair Peter Sherr, felt it necessary to circulate his charter change petition.

When Bernstein got fed up with Auerbach showing up at each place he canvassed, he took Sherr and Auerbach to court to seek an extension of time to collect signatures, the judge ruled Sherr and Auerbach’s behavior obnoxious but not illegal.

Fortunately, the registrar of voters verified about 1,000 signatures, hundreds more than the 637 Bernstein required, earning him a place on the Nov 7 ballot.

Auerbach’s blatant attempt to distract and confuse voters is not only brazen, it is beyond low. How can we expect him to be fair and rational with decision making for ALL children?

Auerbach’s latest stunt occurred this past Friday, September 22 when he made an appearance, along with BOE Mr. Sherr, at the Hamilton Avenue School pick up.

Mr. Auerbach circulated flyers promising that if elected to BOE, he would seek to fix our uneven, man hole cover metal protruding, contaminated, feces impacted, dirt patch of a playing field, which is the smallest in town. The current condition of this field is a liability, which could cost the town thousands more than their proposed fix.

With Mr. Auerbach knowing that we are a racially imbalanced Title 1 school of predominantly Spanish speaking families, one would think he would have translated his flyers into Spanish at the very least as all communications at HAS are or they are not circulated.

What’s more astonishing, just four short months ago, Mr. Auerbach was handing out flyers at the Riverside Train Station to slash $220k from the Board of Education’s budget that would have directly impacted HAS students, by eliminating 2.5 teaching positions and causing a larger student to teacher ratio.

Comparing Hamilton Avenue to Riverside is like comparing apples to oranges.

Ham Ave School has a stubborn achievement gap, a much higher number of special needs children, ESL students, students on free and reduced lunch, and for 15+ years, we haven’t been able to get a handle on the racial imbalance.

The point, the field is not a new issue. It’s been in the works for quite some time. Had Chickahominy RTM member Sylvester Pecora and community member David D’Andrea, both alumni of Hamilton Avenue School, not been tireless advocates for a fix, and not appeared at countless public hearings pleading with the BOE and BET to make the field and flooding issues top priority, we’d be nowhere.

2/14/17
“I think it’s clear we need to do some work on the field,” BET Budget
Committee Chairman James Lash said to representatives of the school board. “Maybe there’s another option that we can hear. We meet every month and if you can bring us something that is more in keeping with the current budgetary realities, we’d be happy to move on it.”

Board of Education Chairman Peter Sherr said Monday his board would look for new options.“Our goal for this property is to have a field that is consistent with Connecticut law,” Sherr said. “This field is not similar with the ones at our other elementary schools.”

Parents are not happy that the BET failed us by not adequately budgeting or addressing this a decade ago. Why the wait to remediate “unforeseen” mold issues in a 100-year- old school? Why did educators and children have to suffer with their health? The result of waiting, two handfuls of parents suing the town in 2009 for civil tort, which the case remains pending.
http://civilinquiry.jud.ct.gov/CaseDetail/PublicCaseDetail.aspx?DocketNo=FST
CV095012500S

Less than a year ago within in the BET’s files I discovered this document.

I can attest and assure you, NOT any of these issues have been mitigated, furthermore we don’t have any locked fences. Go walk the property and have a look. There are traffic safety concerns that we have been reporting for over seven years with no remedy in sight and our children attend school in a building that lacks a Certificate of Occupancy from the Fire Marshal.

What the west side students need are Board of Ed members that will be impartial and represent ALL SCHOOLS, not only the schools their children attend, and certainly not BOE members who take resources from our children.

“Look, the BET made it very clear that it was not in favor of spending
money at that level to fix the field,” said school board Chairman Peter
Sherr, who was the only board member who voted against the field leveling project. “There is strong consensus to do something. I’m going (to) recommend that the board go back to our administrators and ask them to see what other options there are to make the field materially flat.”

In closing, this field is not only a liability, it’s a legitimate need (not a want). You will get who you vote in, if you don’t vote, you have no say. I encourage you all to read the facts and decide what candidates will truly have the best interests of all GPS students district wide. Think very, very carefully before you cast your vote!

The municipal election affects your day to day, it’s important that you make it a priority on November 7, 2017. If you aren’t registered to vote, do it now, and make your vote count!

Attend the Board of Education Debate on October 11 at Hamilton Avenue School from 7:00 to 8:30pm. And get your questions into the debate forum prior to!

Will your “neighborhood school” be next for cuts?

This communication is written in my own individual capacity. I am not writing in any of my volunteer roles as a board member of the PTA or an RTM member for district 3. 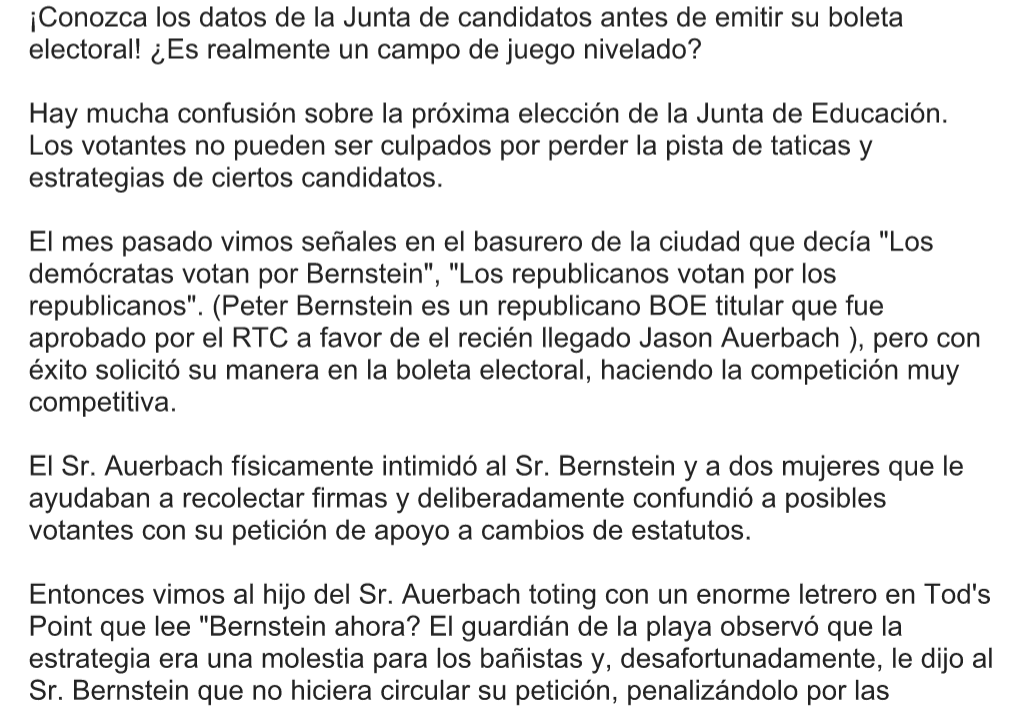 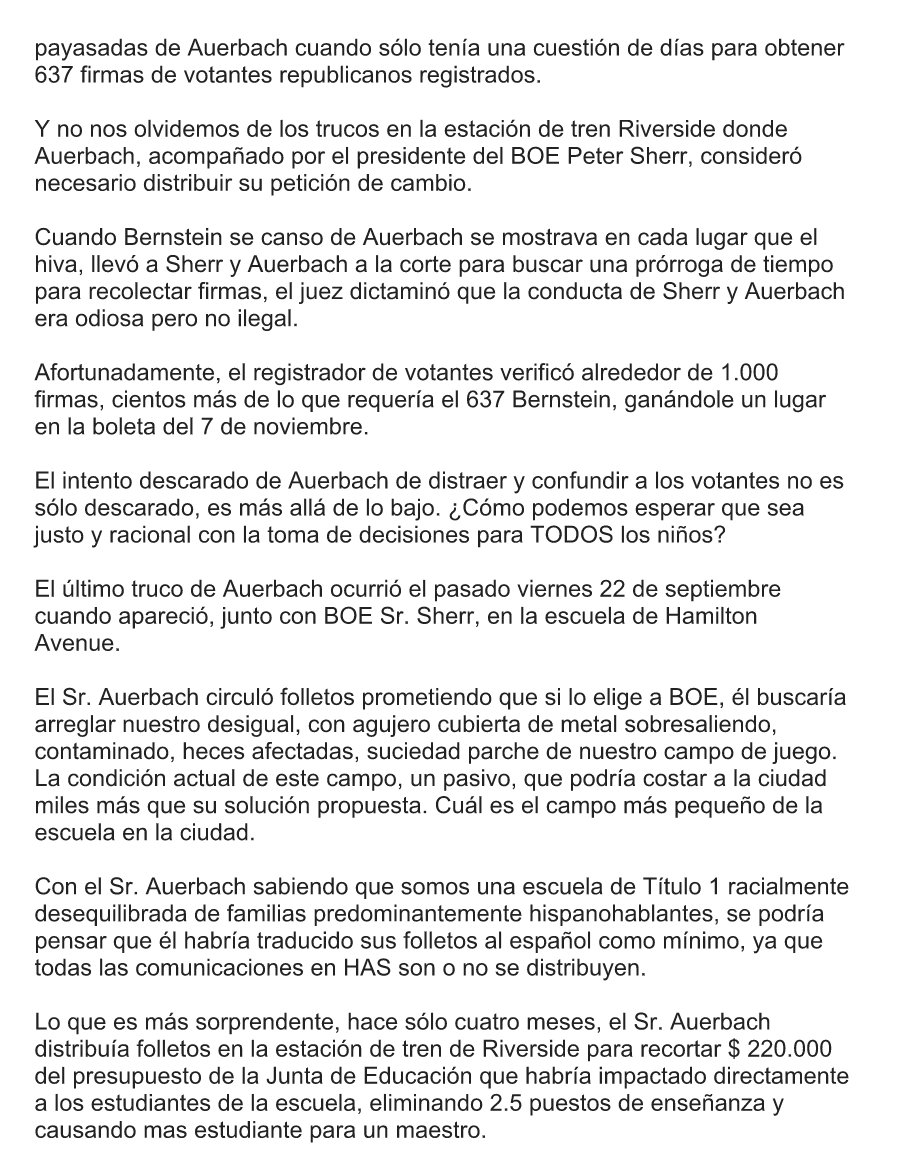 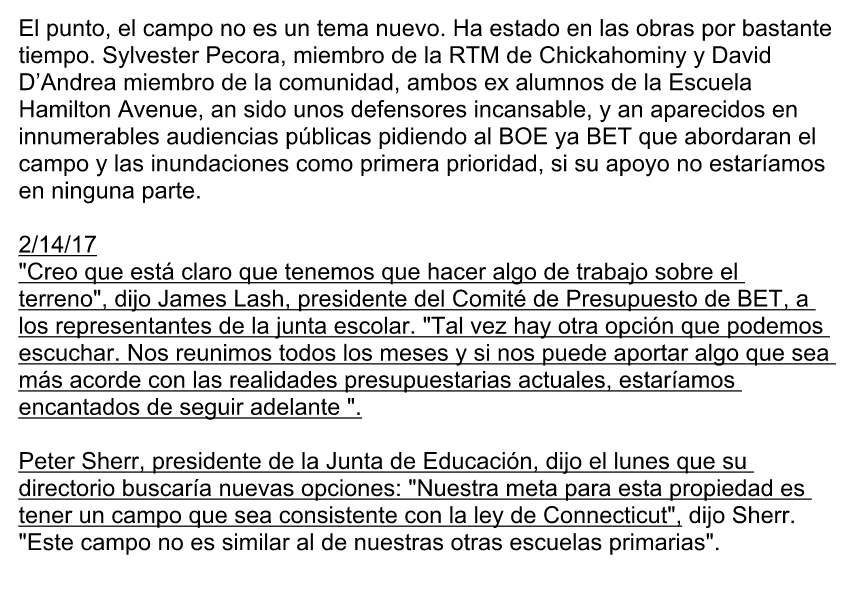 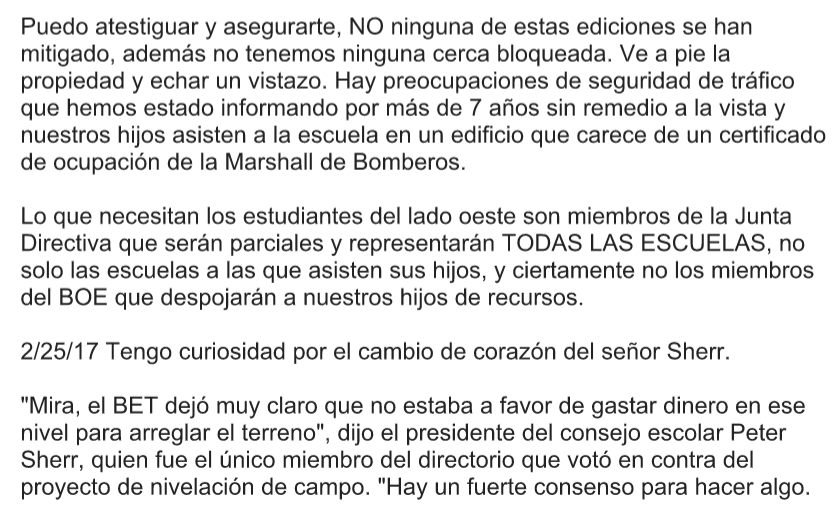 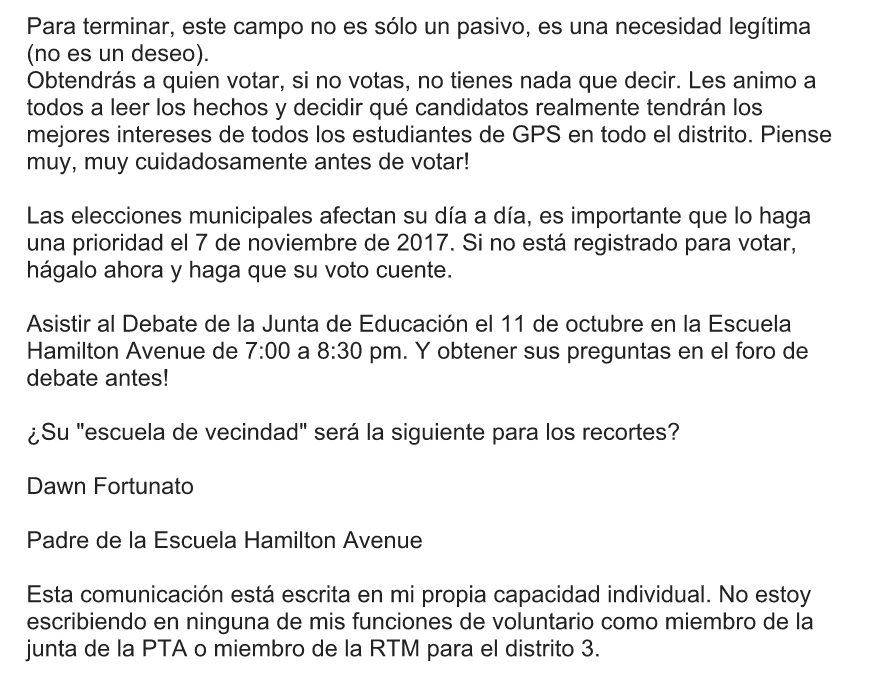