At a Purim celebration in March, I happened to be sitting next to a woman from Greenwich Reform Synagogue, the congregation that has applied to build a large new house of worship in the middle of the residential part of Cos Cob, where I live.

“Why did GRS sell their existing property on Stanwich Road?” I asked her.

“Because they got an offer they couldn’t refuse,” she said.

When I explained that I lived where they were planning to build, I received an airy, flippant response: “Oh, it won’t affect your neighborhood at all.”

The Greenwich Reform Synagogue leadership, with the help of a hired PR company and extensive media contacts, has worked hard to create a narrative that anti-Semitism is fueling the opposition to their building. Nothing could be further from the truth. I am Jewish. I keep a kosher home and attend services regularly.

The reasons for opposition to this project are completely legitimate concerns about flooding in an already flood prone neighborhood, blasting of rock ledge, damage to sensitive wetlands, increase to traffic in a congested area, safety of the neighborhood children who walk to school, severe underparking in the plans for the building – I could go on. The list is long, and religion has nothing to do with it. Cos Cob residents would be opposing this development were it a church or a mosque or a library or a 12,000 square foot McMansion. It is, quite simply, an inappropriate plan for the proposed site.

GRS had a choice to take that lucrative offer for their existing house of worship.

They had a choice to leave their home, and they took it. Now they seek to enter our neighborhood, causing severe damage to the property rights and enjoyment of residents who have lived here for decades.

Take Tony and Barbara Lovallo, for instance. They have lived in their home at 90 Orchard Street for over 44 years. Tony volunteered for the Cos Cob Fire police. He uses his own tractor to clear his neighbor’s walks and driveways, and looks after other residents’ pets when they are away. Tony and Barbara aren’t Jewish, but they give meaning to the Jewish principle of Ahavat Yisroel as expressed in Leviticus 19:18 “Love thy neighbor as thyself.”

GRS’s building will not only destroy their enjoyment of their home, the value of their property will decrease. Robert Birnbaum, the president of the congregation, admitted as much in a letter to the couple dated 4/17/13 “Our project for a new spiritual home in Greenwich is going forward, regardless of the final disposition of your appeal…Your property will never be worth more to GRS than it is today.”

The opposition to GRS has nothing to do with anti-Semitism, but it does have everything to do with anger at those who apparently have a classist disdain for hardworking people in Cos Cob. It has everything to do with dishonesty – with religious leader who publicly gets up and makes lofty speeches about Tikkun Olam, the Jewish concept of repairing the world, while his congregation’s leadership has in actual fact, done the exact opposite in its relationship with the neighborhood of Cos Cob.

Several Cos Cob neighbors and I met with Robert Birnbaum in the fall of 2012.

Despite Rabbi Sklarz’s claims of wanting to repair the world and work with the neighbors, GRS had made no effort to do so – in fact, they had been as secretive as possible. I know one of the GRS Board of Trustee members well from my political work in town. Despite knowing full well that I live close to the site, at no point did he attempt to contact me to discuss the development or to work with us. In fact, I was told that he was informed by GRS’ lawyer quite specifically to avoid discussing it with me. Perhaps this is because GRS’ lawyer, Tom Heaghney, had previously represented my neighbor, Tom Dianis and myself in opposition when Lou Caravella and his son Randy had tried to develop the back portion of 92 Orchard and 22 Osee, back in 2008. The Wetlands Commission denied that project due to intensive development close to the wetland.

When our neighborhood representatives met with Mr. Birnbaum in 2012, he said that GRS’ architect, Mark Thompson, thought they could build without blasting. We were skeptical, knowing the site. As we now know from plans – not to mention a letter that GRS’s representative, Frank Farricker, sent to Tony and Barbara Lovallo on April 19,**2013, this was, if we’re being extremely charitable, very optimistic, particularly since at that time they were looking to build an even bigger building.

We were skeptical, knowing the site. As we now know from plans – not to mention letters that GRS’s representative, Frank Farricker, sent to Tony and Barbara Lovallo on April 19th particularly since at that time they were looking to build an even bigger building.

On Tuesday night at the Planning and Zoning Meeting, Sandy Soule, Co-chair of the Building Committee, announced how long she has lived in town and made a point of saying how GRS members have been “driving by” 92 Orchard for years. Indeed. But when Cos Cob resident Ned Glenn asked for a show of hands of many GRS members actually lived within proximity of the site, there wasn’t a single hand raised. Maybe it would be easier to be good neighbors if more GRS congregants were actual neighbors. One local resident, a former GRS board member, resigned over the plan to build at 92 Orchard.

GRS’s attorney has made claims that GRS has a right to build a 12,000 square foot building on a site surrounded by eleven much smaller homes with inadequate parking, because there are other religious institutions in town outsizing the homes around them, some, as he point out, with no parking. What he neglects to point out is that these institutions were built before current regulations and they grew there because that’s where their congregants lived.

Cos Cob residents have been forced to raise thousands of dollars to defend our property rights. Not only that, our own town government tried to dismiss our lawsuit against the Planning and Zoning Commission on the lot line revision, and the judge threw out the motion to dismiss with what is perhaps the most scathing opinion I’ve read in quite some time. The conclusion, in particular, is worth a read, http://ccffrr.org/news-3/we-won-this-round/decision-re-motion-to-dismi.pdf

Greenwich taxpayers, to see how our town government is not only failing to protect Cos Cob, but in this case appears to be working against us.

At the 2012 meeting, I reminded Mr. Birnbaum of the Talmudic story of Rabbi Hillel and the convert. Once there was a non-Jew who came before Rabbi Shammai, and said to him: “I’ll convert to Judaism on the condition that you teach me the whole Torah while I stand on one foot. Shammai told him to go away. The same fellow came before Hillel, and Hillel converted him, saying: “That which is despicable to you, do not do to your fellow, this is the whole Torah, and the rest is commentary, go and learn it.”

Sadly, we have seen little evidence of that.

Submit letters to the editor to [email protected] 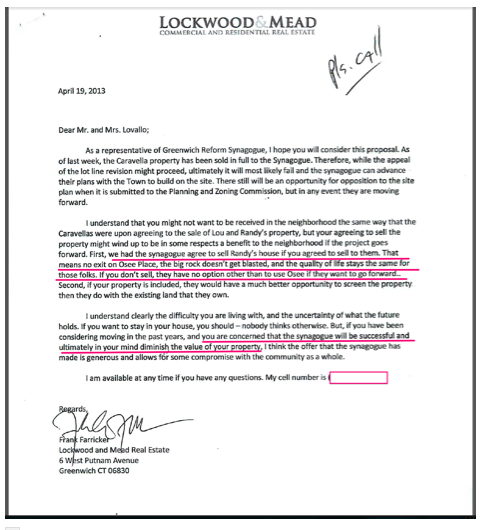