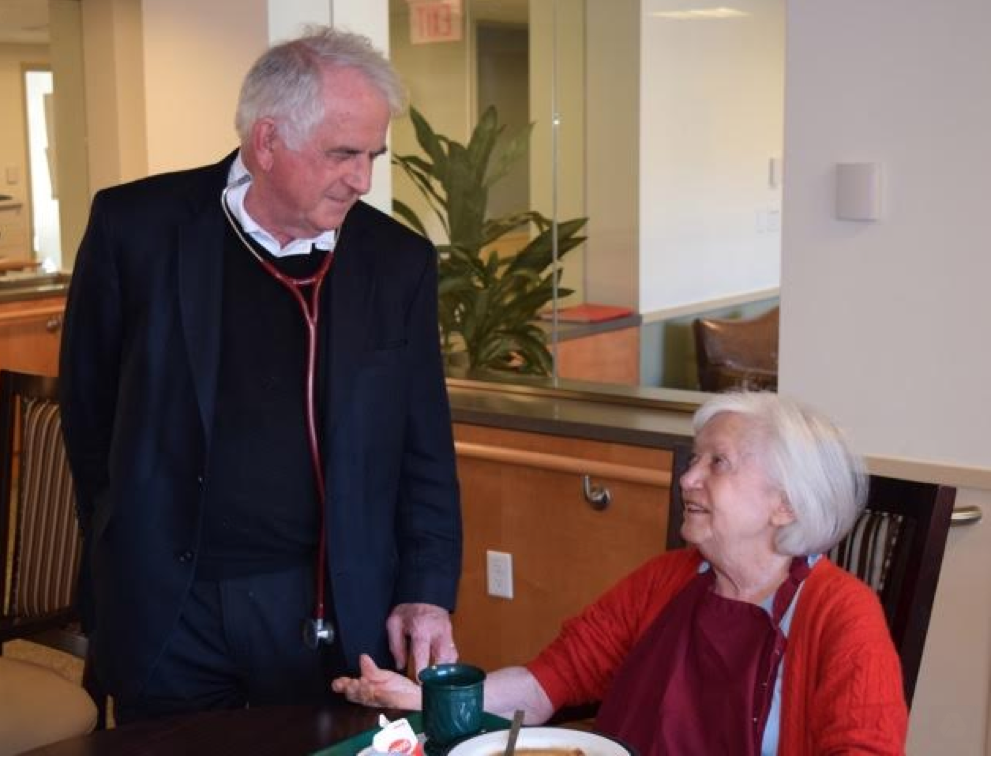 Recognizing his decades of caring for the community, Dr. Francis X. Walsh, Medical Director at The Nathaniel Witherell, was recently honored with a Fairfield County Doctors of Distinction Award in the category of Lifetime Achievement by the Fairfield County Business Journal. Dr. Walsh has been a beloved member of the Witherell’s medical staff for 42 years and has served as the facility’s Medical Director since 2008. It’s no small job – he oversees 20 doctors and is responsible for supervising the quality of medical care for 185+ skilled nursing care residents and short-term rehab patients.

“Dr. Walsh is a fixture here and is truly the backbone of what goes on in the Witherell community. He is a highly dedicated professional, collaborates with our entire clinical team, and takes the time to answer all of his patients’ questions, ” said Lynn Bausch, Witherell’s Director of Nursing. “He really cares about the residents and rehab patients, and he’s a big proponent of enhancing the quality of life here at the Witherell.”

While some may know Dr. Walsh from his frequent visits to the Witherell – he comes by six days a week – they may not know that he’s been a physician for over four decades and, at age 74, has one of the busiest practices in nephrology and internal medicine in Greenwich.

On his daily rounds at the Witherell, he sees patients from his private practice as well as those who don’t have an attending physician.

Dr. Walsh’s roots in the medical field date back to the mid-1960s, when received his undergraduate degree from College of the Holy Cross in 1963 and his medical school degree from New York Medical College in 1967. Following his graduation in 1967, he did his internship and residency at Greenwich Hospital (1967-70), and completed his Fellowship in Nephrology at Duke University Medical Center in 1972. In addition, he served as a Major in the U.S. Army and Chief of Medical Services at Kenner Army Hospital in Fort Lee, VA (1972-74). He was awarded the Army Commendation Medal for his distinguished service in 1974.

In addition to his private practice and work at The Witherell, Dr. Walsh is an attending physician at Greenwich Hospital, where he has been the Director of Nephrology since 1974. He was Chief of the Medical Staff from 1994-1997 and Assistant Chief from 1990-1993 at the hospital. He is also the Medical Director at The Mews in Greenwich. In addition, he has provided medical expertise to a long list of facilities, including Stamford Hospital, United Hospital in Port Chester, Greenwich Woods Nursing Home, Waveny House in New Canaan, Mediplex in Darien, and Homestead Health Center in Stamford, just to name a few.

His prior training, teaching and work have all strengthened his commitment to taking care of the healthcare needs of those he sees at the Witherell. Dr. Walsh is dedicated to making sure both the skilled nursing care residents and the rehab patients are provided with the top-quality medical care that the Witherell is renowned for. “He’s highly committed to the Witherell and takes exceptional care of all those who enter our doors,” says Allen Brown, Witherell’s Executive Director. “It’s a calling ­– he’s a devoted physician who’s known many of his patients for years and years.”