Roger is a five year old Lab-mix from Tennessee who was transported to Norwalk by a rescue group, fostered by a family in Norwalk and adopted by the editor of Greenwich Free Press three weeks ago.

Roger is a fabulous dog. He is well behaved, happy and smart. Apparently his previous owner died and in the care of his owner’s surviving family he became ravaged by fleas and lost his hair.

Most of Roger’s hair has since grown back, but he has bald spots. One spot reveals a tattoo near his genitals. It is as large as it is crude. It is almost an inch high and two inches wide and looks like it was etched by a child.

Funnier yet, the tattoo looks like the Greek letters Theta Gamma Nu. 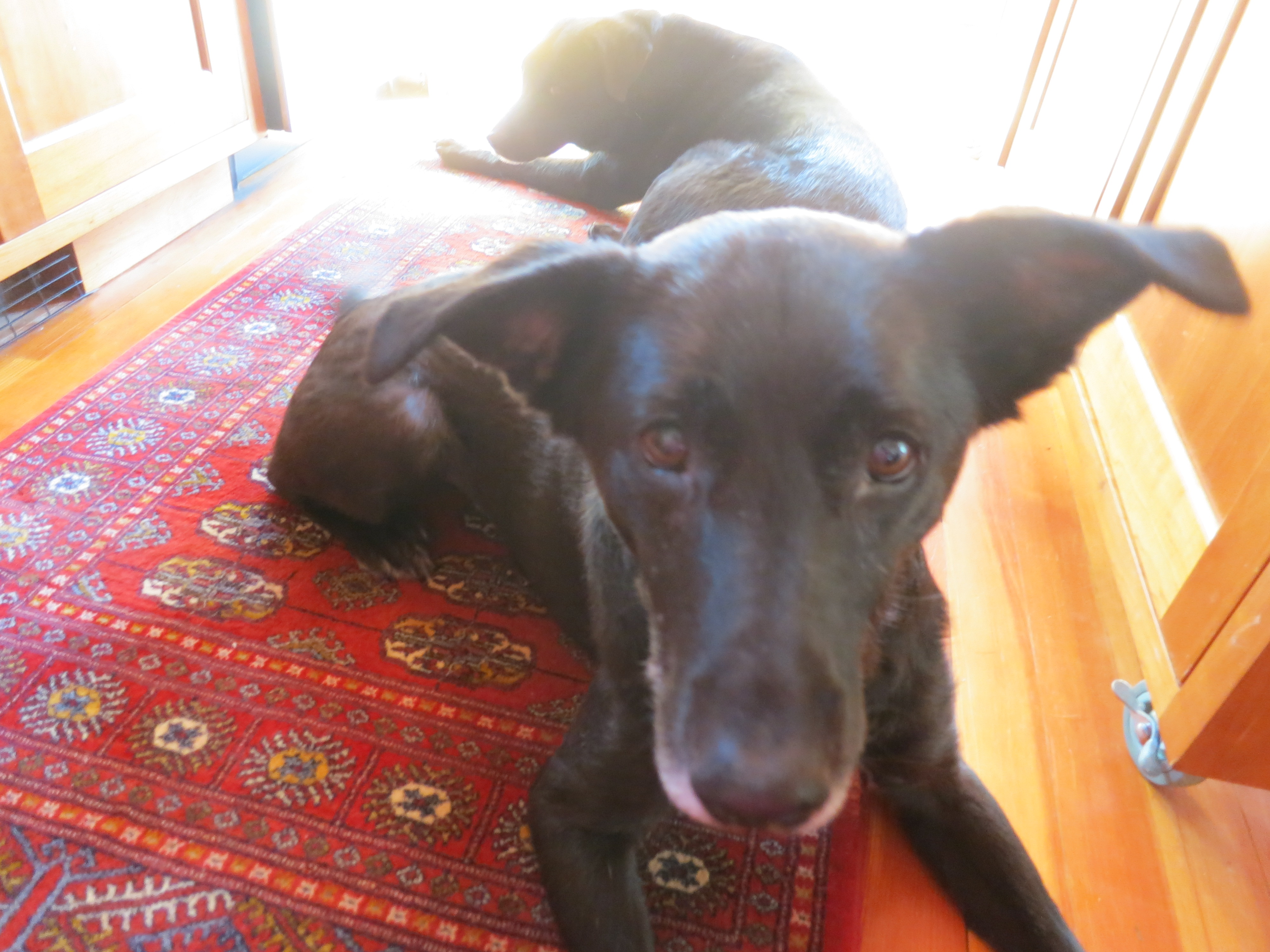 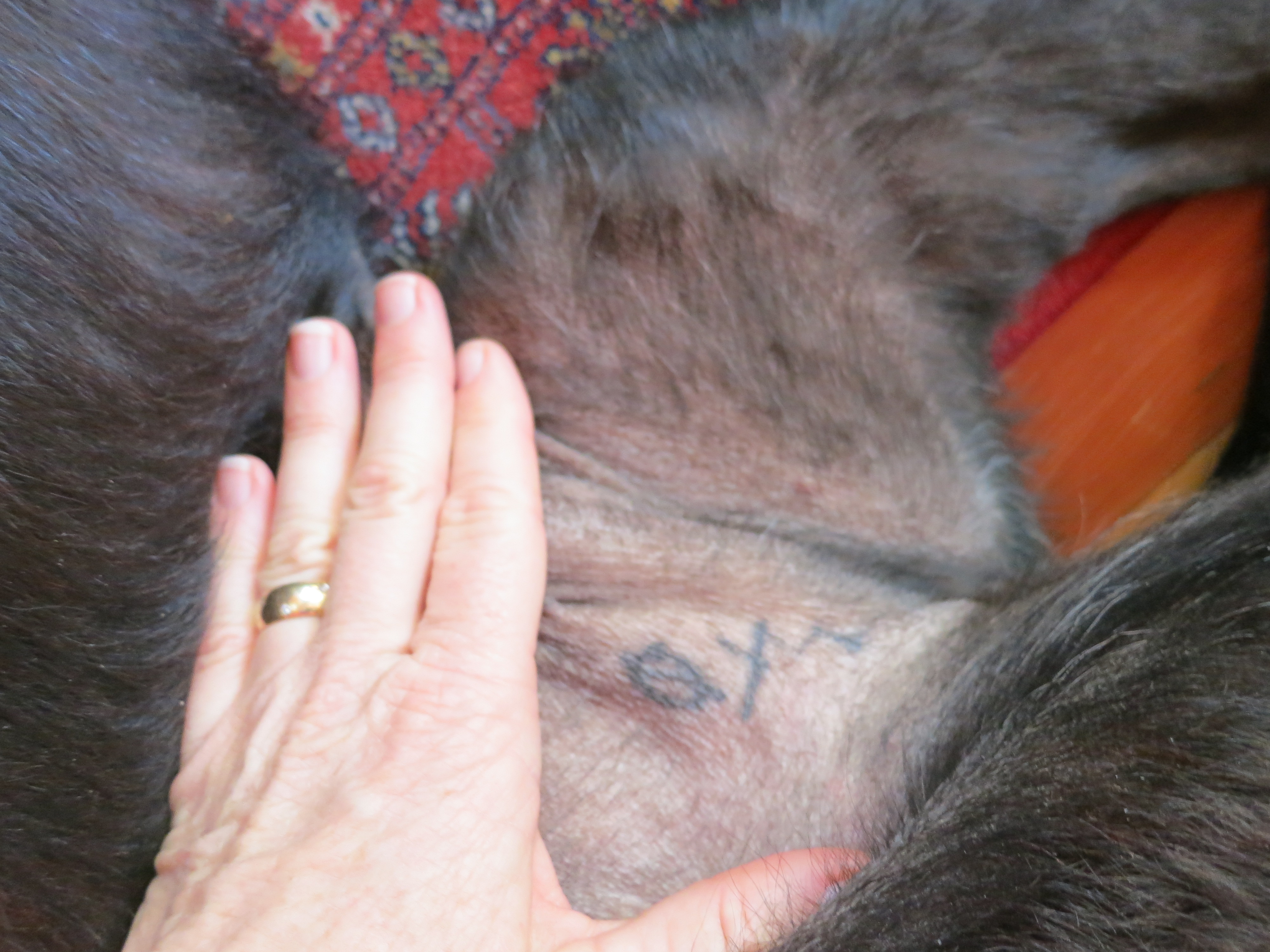 National Dog Registry claims to be America’s Oldest and Largest Pet Recovery System. There is also Tattoo a Pet International whose website claims that tattoos are preferable over micro chips, because, “the dog MUST BE SCANNED in order to find the chip.   We see more information all the time indicating that shelters are not scanning the animals at all.  Reasons like “we were to busy”, “they are never registered anyway”,  “the scanner is broken”, “there are to many scanners so we just don’t check any” or the “battery was dead” are all to common excuses for not checking for chips…”

Allyson Halm of Adopt a Dog said that over twenty years ago breeders would tattoo, usually in the inner thigh, but since micro chipping has become common to aid “recovery,” her understanding is that tattooing is obsolete.

Halm also said that her organization does see tattoo lines along the spay incisions, which she said is really helpful in identifying when a female has been spayed.
That begs the question, why would Roger, a male, need a tattoo?

On its website, Tattoo A Pet has a link to a blog about a dog named Rusty who was rescued from an animal laboratory because he had a tattoo.

The blog chronicles how Tattoo A Pet received a call from “a Class B Dealer” about a dog with a tattoo whose owner they wished to return the dog to.

Class B Dealers or “Bunchers”
According to the Humane Society, Class B dealers are “people who buy dogs and cats and keep them in holding facilities before selling them to laboratories where they are used in harmful experiments.”

Class B dealers are also known as “Bunchers,” people who source dogs for use in laboratories for animal testing.

Roger and his sister who was rescued by New Canaan’s Strays and Others  from George both have microchips.

But Roger also has his jumbo tattoo, which may be registered to his previous owner who is deceased.

A quick internet search of Class B dealers brings up several southern and midwestern states.

This leaves GFP  thinking that Roger’s previous owner  loved him so much that he arranged for the big, bold — if not crude  – tattoo. Roger certainly shows lots of signs of having been loved.