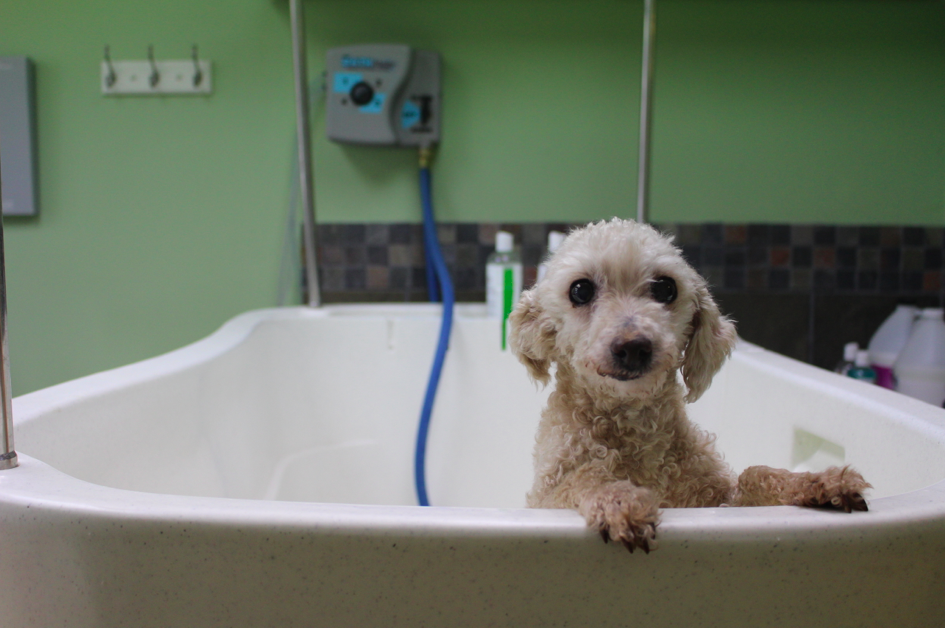 Nooki has come a long way since being left in a laundromat on Long Island last month. After a week’s stay in the laundromat, he made it to animal control, and from there to the care of Cat Assistance volunteer and Greenwich resident Kerri Ann Hofer.

Hofer knew that the little toy poodle would benefit from an expert grooming and reached out to Groomer Has It in Cos Cob, where Monica Torres didn’t hesitate. 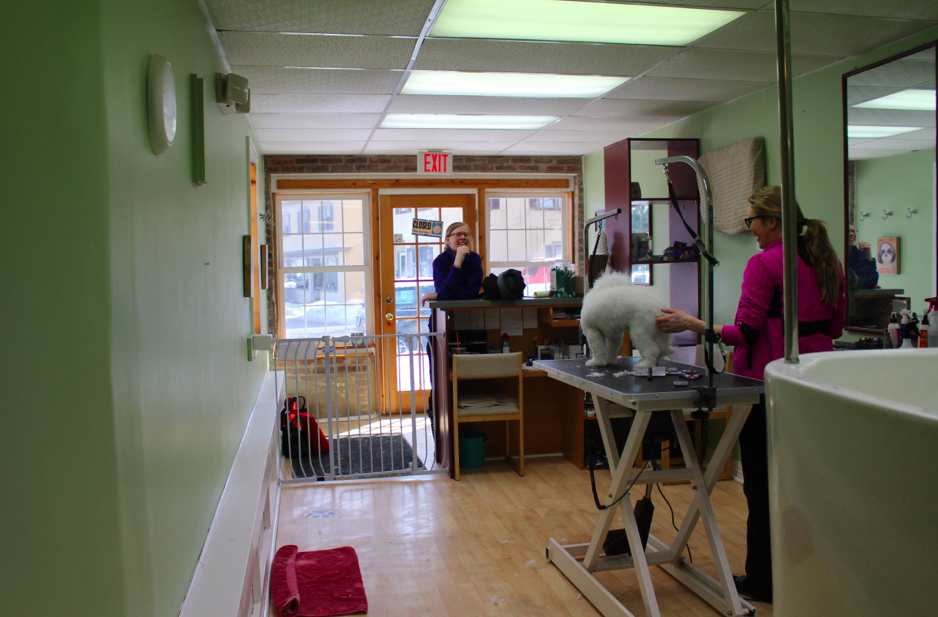 Torres, a big fan of rescue dogs, including her own rescue Min Pin who is something of a Mini-Me for Torres’ other dog, a Doberman Pinscher, took to Nooki right away.

While Greg Whitechurch bathed Nooki, Torres talked about her philosophy and the Groomer Has It business she started about a year ago at in Cos Cob. The spot was empty for a while before she arrived, but was previously Spezzano’s Salon. 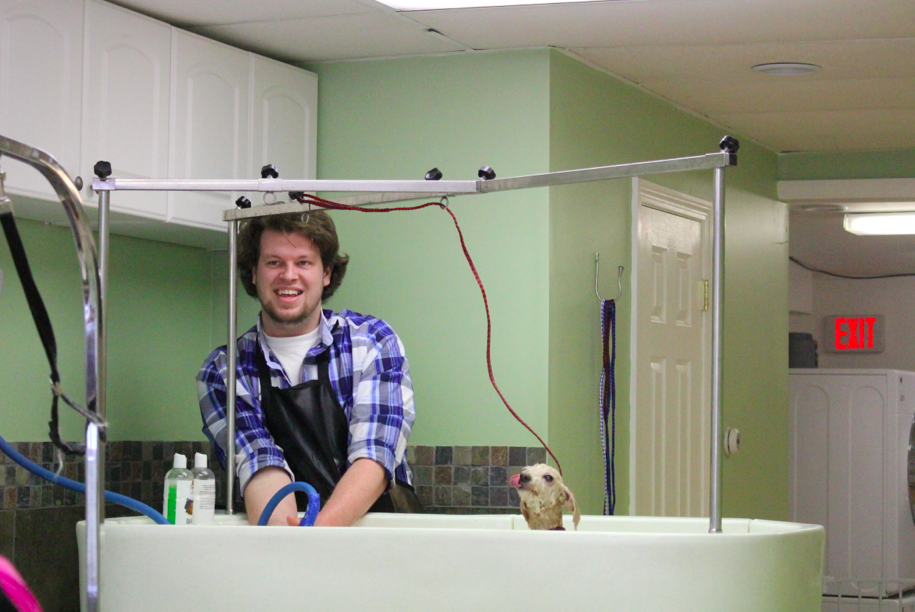 Torres said her number one goal is for dogs to be comfortable and stress-free. “There are no muzzles here. I won’t have them,” she said, adding that she’d rather send a dog home with the nails on one paw unclipped or a little wet on the shoulder if they grow stressed. “They’ll come back the second time and we’ll get further,” she said.

Torres, who attended an equestrian high school and always loved to ride and train horses said she grooms five or six dogs a day. She described knowing from a young age that she wanted to work with animals and when she was a teenager worked for a groomer as a “bather/dryer.” Later she became a vet tech, but was worn down by the many sad days that involved dogs being put down. 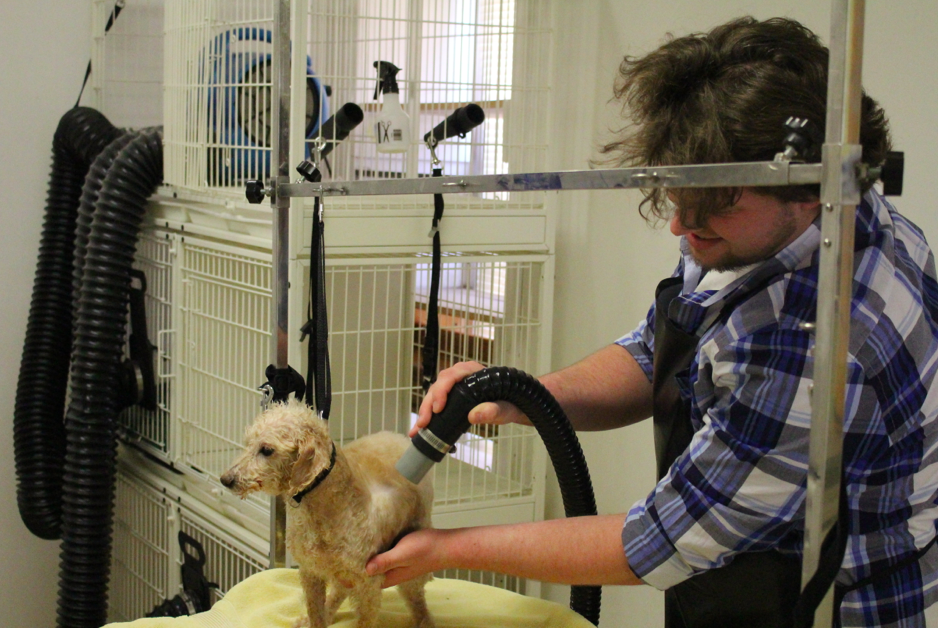 She learned grooming from a Samoyed breeder whose grooming skills were tremendous, and then worked for several years for a local groomer. “It takes at least five of practice years to be a decent groomer,” she said. Torres jumped ship when she grew discouraged by the assembly line approach she witnessed. Dogs were groomed in batches, muzzled, sometimes and put in cages.

“There are no cages here,” Torres said of Groomer Has It. “There’s no assembly line here, and there’s usually just one dog here at a time.” 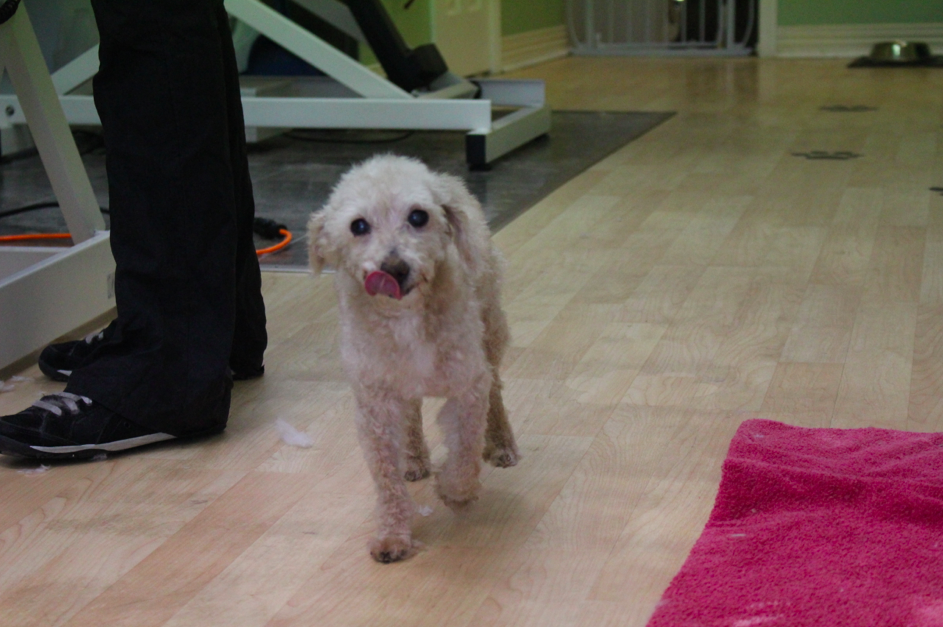 Torres said she believes in quality and humanity. “It’s all about having a stress-free atmosphere,” she said. “Dogs should look forward to coming here.”

After Nooki had been bathed and partially dried, he stood atop the grooming table for Torres to get to work. Because Nooki had been so matted when he was dumped in the laundromat, the vet had shaved him completely and his hair hadn’t grown all the way back. Torres said she would focus on his face, feet and privates.

In the end Nooki looked terrific. The little oatmeal colored toy poodle ran around the floor at Groomer Has It, delighted with the pampering he received. Now all he needs is a forever home. 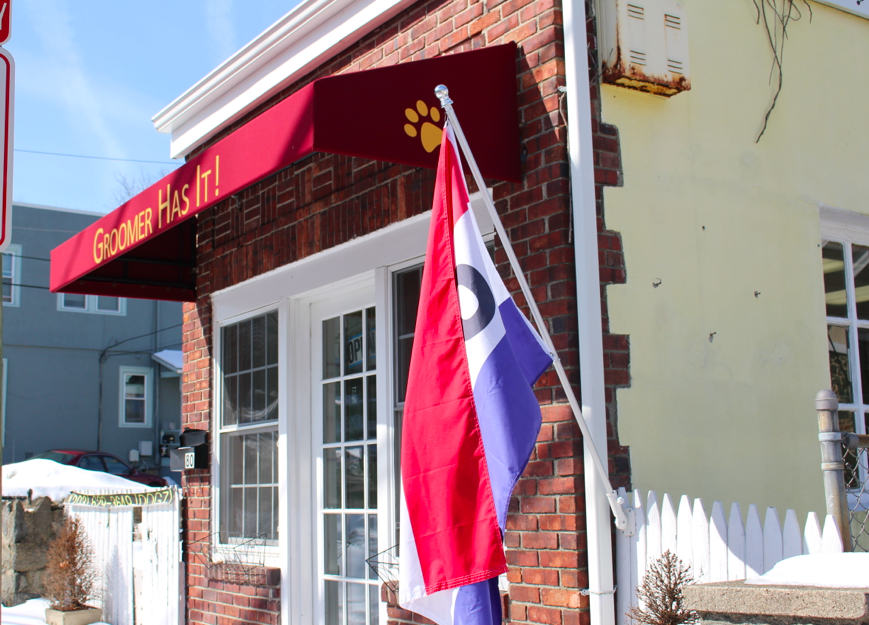 On her part, Torres said she can hardly keep up with the stream of business as Groomer Has It.

More on Nooki: This senior toy poodle is very gently and cuddly. He is looking for someone who is mostly at home (he is not fond of being left alone) and who shares his passion for curling up on the sofa with a good book, or hanging out in bed watching movies.  He is also great in the car.  He is a low-energy dog who is house-trained (he likes to do his business outside, but if left alone with wee wee pads he will use them).

If there is an older person in your life looking for companionship, Nooki would be perfect.  He is currently being pampered in a Greenwich foster home.  For more information, please contact [email protected].  www.CatAssistanceNY.org

Also Cat Assistance is looking for people who are interested in fostering dogs like Nooki while they wait for their permanent homes.  Please contact Kerri Ann ([email protected]) for more details. 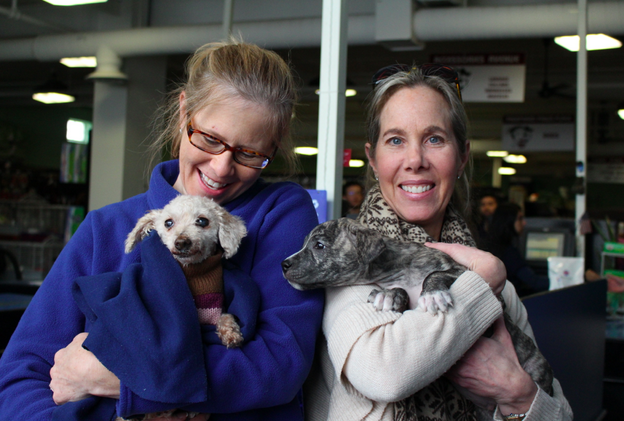 Nooki with Hofer and Tina Aronson at Pet Pantry. With Nooki was “Nash,” the pit bull mix puppy who was adopted by Leslie Addy of Greenwich. Credit: Leslie Yager