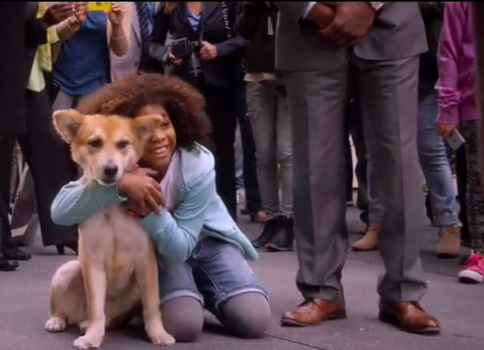 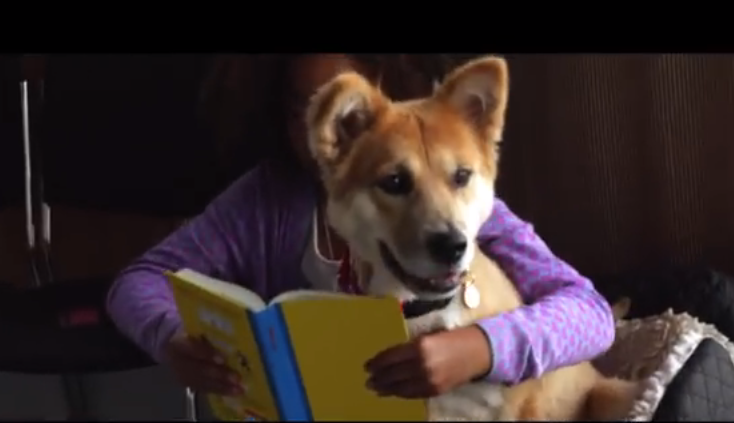 The Adopt-A-Dog is celebrating the holiday with the heart-warming “wags” to riches success story of its former rescue dog resident, Marti.

Marti is the canine star of the new ANNIE movie that opened in theaters on December 19th and she’s also taken on the role as an inspirational ambassador for fellow shelter dogs everywhere.

“Marti arrived at Adopt-A-Dog in 2013 as one of five rescue dogs brought to us from Georgia,” recalls Allyson Halm, president of Adopt-A-Dog.

The supposed golden retriever chow mix, Marti spent approximately five months with us until she met Broadway and theatrical animal trainer, Bill Berloni, who lives in Connecticut, explained Halm who added that Bill is a friend who’s been a judge for Puttin’ On The Dog Festival.

Halm said Bill was looking for a certain dog who would fit the bill for a new movie and he visited Marti several times at our shelter to evaluate her potential.”

Berloni, who was the 2011 recipient of the Tony’s special Honor for Excellence in Theatre award, ironically found the original Broadway ANNIE cast dog “Sandy” in 1977.  At the time, he was an aspiring actor who instead became a world famous animal trainer for film and Broadway stage productions.

Berloni conducts national talent searches for projects looking to employ four-legged thespians only at shelter and animal rescue facilities.  He is recognized for upholding the highest principles of humane behavior in his training practices.

“Adopt-A-Dog is one of the finest adoption agencies in the tri-state area which is why I have supported them all these years,” said Berloni in a statement.  “Finding Marti there is a testimony to the care they give all the animals for adoption.  They treat them all like the stars they truly are.”

Marti put her best paw forward during the highly competitive auditions, and won the coveted role as Annie’s faithful canine companion in this highly anticipated remake of the original film.  In what becomes a parallel story of two orphans who are discovered and ultimately adopted, Annie speaks the memorable line: “Hi girl, we found each other.”

Marti embodies the canine version of the beloved story of Little Orphan Annie.  “Never give up on a rescue or abandoned dog at a shelter,” says Halm.  “Each and every resident here is a bright star deserving of red carpet treatment as they await a forever home.”

In the spirit of ANNIE and to honor Marti’s rise to fame, Adopt-A-Dog has launched a special “Tomorrow” fundraising campaign to support its current and future residents.  Help Marti aid other less fortunate dogs by making a donation at www.adoptadog.org or by calling (914) 273-1674 to inquire about ongoing sponsorship opportunities.

Founded in 1981, Adopt-A-Dog is a dog and cat rescue sanctuary and adoption center serving Connecticut, New York and beyond.  Adopt-A-Dog has aided in the successful placement of thousands of dogs and cats with caring new owners.  The charity’s facility and its dedicated staff and volunteers provide the care, attention, interaction and exercise that these helpless, homeless animals need until a permanent and loving new home is found for them.  Adopt-A-Dog is a 501(c)3 non-profit organization that relies 100% on private donations.  For more information, contact www.adoptadog.org or call

PHOTOS: At Puttin’ on the Dog, Good News Abounds!