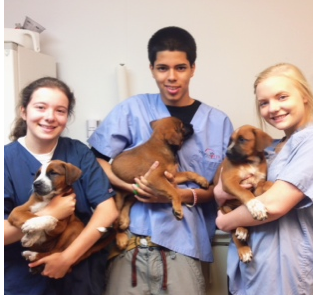 Adopt A Dog, located just over the state line in Armonk, is a “rescue sanctuary” for dogs and cats.

The mission of the sanctuary is to find safe, permanent homes for rescued cats and dogs. The shelter was founded three decades ago by Donna Nives, Gloria Scheuer and Pam Fahnestock.

The Armonk shelter is currently run by Allyson Halm.

Upon arriving at Adopt A Dog we learned that the shelter was the temporary home to 14 cats and a remarkable 28 dogs including 9 new puppies.

Many of the dogs located at Adopt A Dog were rescued from broken homes, with poor living conditions. For example, the puppies that recently came in, were found living under the porch of a house.

We spoke to the Greenwich High School interns working at Adopt A Dog, Brian Tito, Sophie Gustavson, and Sammy Salkin to get some information on Adopt A Dog, and to find out what they have been doing around the shelter.

Brian informed us that their main duties were to feed the dogs, clean out their kennels, walk them, and adjust them to domestic life.

All of the interns rotate with the dogs for 30 minutes each, taking them outside to play, stretch their legs and run around. All of the dogs get out at least once per day sometimes twice depending on how efficiently the trainers are working. Each intern also has a “project” dog that they are responsible to take care of as their dog.

Senior at GHS, Sammy Salkin said that “People looking to adopt a dog are more reluctant to adopt pitbulls and older dogs.” There is a longstanding bias against pitbulls, and many deem them as a “bully breed.” However, the interns informed us that the pitbulls at Adopt A Dog were all generally calm, loving dogs.

To conclude our visit the interns showed us to the kennel housing the puppies. It was interesting to see how the puppies interacted with each other, and how they differed from the dogs that had been housed at Adopt A Dog longer.

It was very nice to leave Adopt A Dog knowing the puppies were residing in such a suitable living condition surrounded by so much love.

The Adopt A Dog facility certainly keeps the cats and dogs in excellent care; a reassuring thought to anyone who loves animals.