At the annual event to honor the legacy of Dr. Martin Luther King at the YWCA Greenwich an impressive panel talked about the 100 year anniversary of women’s suffrage in the US and how modern day movements are modeled after suffragettes.

“It was not a genteel movement,” said Connecticut Secretary of the State Denise Merrill, of the women who fought in the early 19th century for the right to vote in public elections. “There were hunger strikes. It was brutal. – They were jailed. They were force fed. – You can see the parallels to today. You can see younger women saying we’re not going to put up with it any more.” 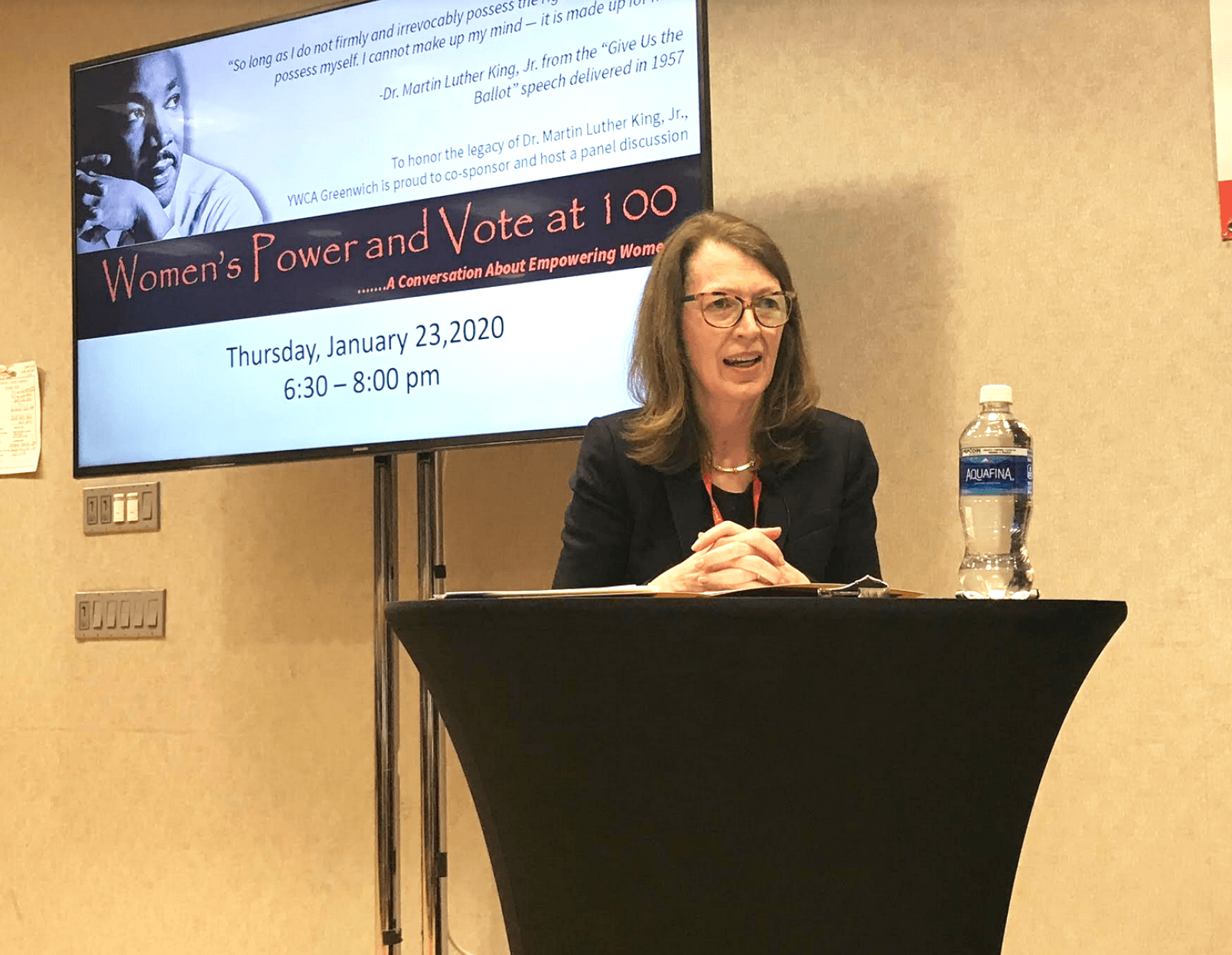 “We are the inheritors of those women 100 years ago,” said Merrill said, listing accomplishments that were hard fought and echo the efforts that began at Seneca Falls and continued 75 years 1920, when Tennessee became the 36th state to ratify the 19th Amendment, making women’s suffrage legal in the US.

“So long as I do not firmly and irrevocably possess the right to vote, I do not possess myself. I cannot make up my mind – it is made up for me.”
– Dr. Martin Luther King, Jr from the “Give Us the Ballot” speech, 1957

“We passed affirmative consent on college campuses. No means no,” Merrill said. “We never could have passed that – even five years ago. It’s all because of the activism of women.”

Another milestone is The Time’s Up Act in Connecticut that went into effect in 2019. Enacted in the wake of the #MeToo movement, this law changed statute of limitations on sexual harassment and rape, and requires more employers to provide sexual harassment training to employees.

“Could we have passed that without the support of women?” Merrill asked. “No.  People are speaking up. I think of those women chaining themselves to the White House. We’re there again.”

Patti Russo, who directs The Campaign School at Yale University, a program that trains women interested in running for office, spoke of her passion for voting.

“My mother was constantly inspiring us to never miss a vote even when we lived in Tokyo,” she recalled. “It’s the fabric of who you are. You meet people who don’t vote and you think, ‘What’s wrong with you? You don’t get to whine.'”

Russo said when she was a director at Planned Parenthood she set up a voter registration table in the clinic.

“There are ways to be a leader,” she said, adding, “I have never missed a vote.”

Ms Russo said there has been a sea change in terms of women becoming empowered to run for office. Her school was created in 1992, which she recalled was “The year of the Woman.” She said there were abundant successful women candidates including Carol Moseley Braun who became the first African-American woman to be elected to the US Senate.

“Then 1993 happened and it was like 1992 never happened,” going on to list some of the challenges and barriers to women running for office, including the ones they put in front of themselves.

“I’m not good enough. I’m not qualified. I’m waiting for the perfect moment. I’m waiting to be asked,” Russo said, listing excuses she’d heard for years. “I say, ‘It’s not the prom!'”

Russo said that in 2016, right after the presidential election, her school received an large number of calls and emails.

“Women were calling and they were despondent. Then they started marching. That was the first global women’s march. It was phenomenal. That Sunday my phone was ringing off the hook,” she recalled.

Russo said graduates stay in touch and mentoring continues. Having trained 3,000 women in 3-1/2 years at the program at Yale, Russo said still, candidates share their worries.

“‘They don’t like me. They don’t like the way I’m dressed. Something is wrong with me,'” she said. “We’re there to lift you up. That connection and sisterhood makes all the difference.”

“The mentoring piece is key. My greatest joy is seeing women of color become the majority at our school.” – Patti Russo, Executive Director, The Campaign School at Yale University

The conversation turned to women’s empowerment in the private sector and Gretchen Carlson shared as much of her story as she could due to non-disclosure agreements she had signed.

“I have an NDA. There are movies and mini series, and I can’t participate. I can’t even say if they are accurate,” Carlson said. “It’s too late for me, but I want to give every man and woman their voice back.”

Carlson has started an organization called Lift Our Voices, which aims to fight corporate cover-ups of workplace abuses and end NDAs.

She said corporations have been putting arbitration clauses in employment contracts since the Supreme Court ruled on arbitrations 25 years ago.

“The intent of arbitration was never to adjudicate human rights violations. It was for small business disputes, and not for gender discrimination or sexual harassment.” – Gretchen Carlson

Carlson described what often happens when there’s a workplace dispute.

“The woman goes to the Human Resources department.  She’s going to the secret chamber in arbitration. You don’t get the same amount of witnesses or depositions. There are no appeals, and you can’t tell anyone what happened to you. You never work again, you have no references, and the perpetrator gets to stay on the job. So the sexual harassment continues.”

Carlson said she has been fighting for change in a non-partisan way on Capital Hill, working with bill sponsors Senators Lindsey Graham (R) and Kirsten Gillibrand (D).

“We’re going to pass this thing when impeachment is over,” she vowed.

Asked what was her advice to her younger self, Carlson didn’t hesitate. “I have a list,” she said.

“Stop saying sorry. Women say sorry about 50 times a day. Stop feeling guilty about everything. Stop being so damn nice,” she said.

Also, “Embrace failures and take more risks. We are socialized to color inside the lines and not speak up. Take a tiny risk and when you succeed, after you do it, you’ll take another risk next time and do an even bigger one.”

“Women are 50% of the population in the US. You are starting at a lower salary if it’s the same job. A recent poll said 63% of women were paid less to start in an equivalent job as men. You start behind and you never catch up,” she said. “It’s why the discussion about not being allowed to ask what was your pay at your last job is so important.”

Also she said that pay gap impacts families and children, because 49% of employed women and 42% of working women who have children are the primary wage earner.

She said at Pitney Bowes, “Diversity is our reality. Inclusion fuels our ability to perform well. We made the Bloomberg Gender-Equality Index and Forbes Best Employer for Diversity.”