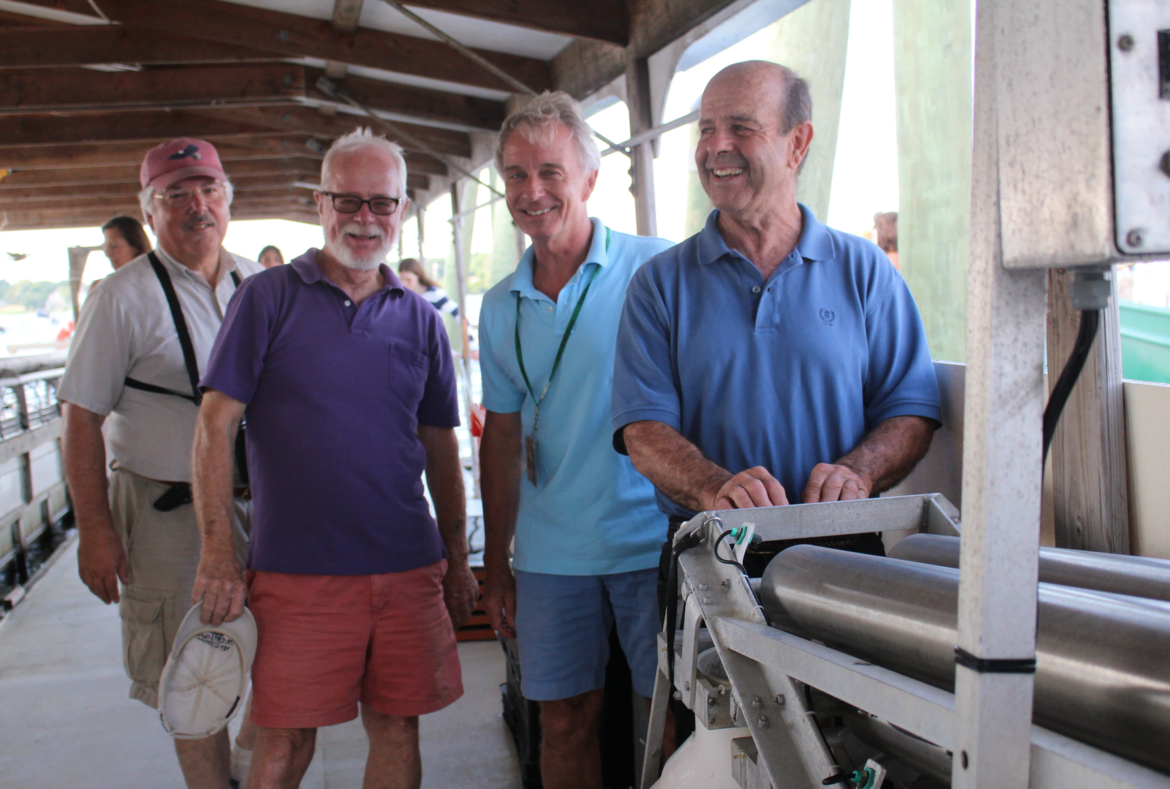 It poured all night and Sunday morning was grim, inauspicious start for the ninth annual Experience the Sound event at Greenwich Point. But something surprising happened. The clouds broke and the sky turned blue from noon until about 6pm. Great luck for the event, as the weather was in the 80°s and crowds kept streaming in. 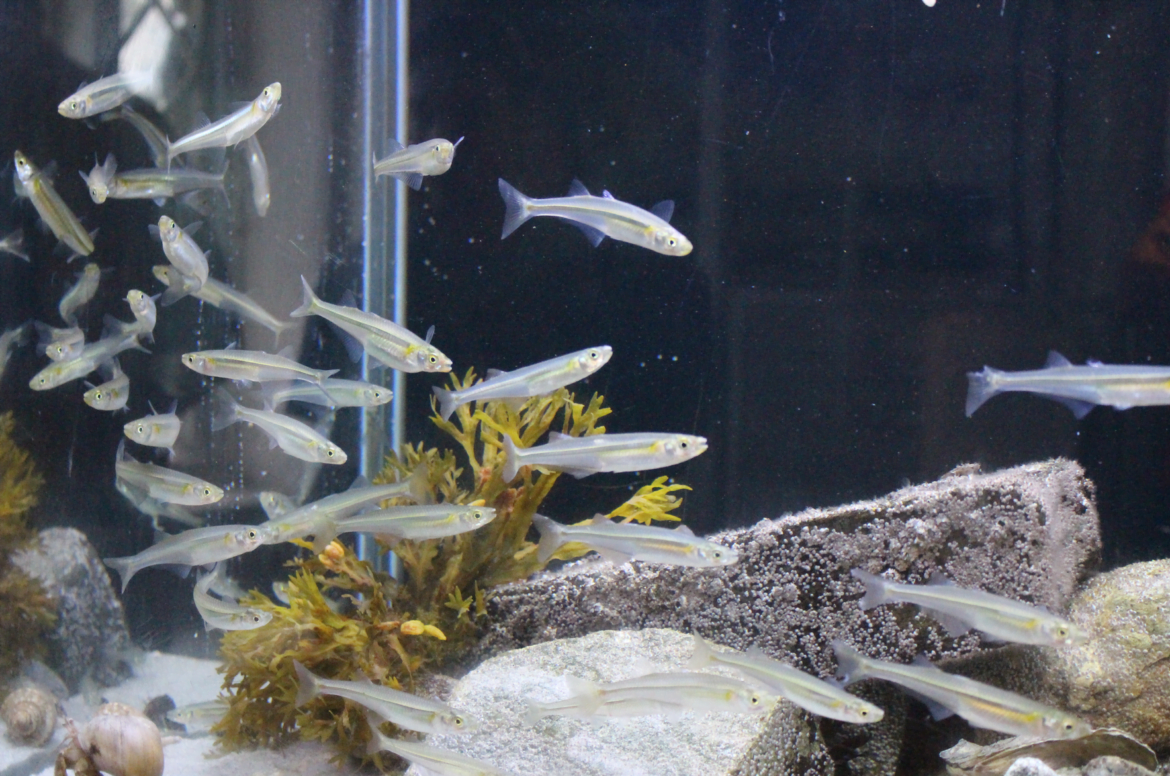 There were multiple groups manning tables in the area of the Innis Arden Cottage, home to the Bruce Museum Seaside center in summer months.

Roger Bowgen of Greenwich’s Shellfish Commission shared explained to Hailey Dybas of Old Greenwich that only the soft shell clams squirt water.  He also pointed out how the edge of an oyster shell is translucent and is called a halo. “That’s the new growth,” he explained.

Roger said a three-inch oyster can filter 100-150 gallons of water a day. “They clean the water, that’s why we plant them,” he said. “They’re also delicious.

Among the volunteers were representatives of UConn who were pressing seaweed. Seaweed is grown to be used for cosmetics and foot, but also, importantly to clean the water. 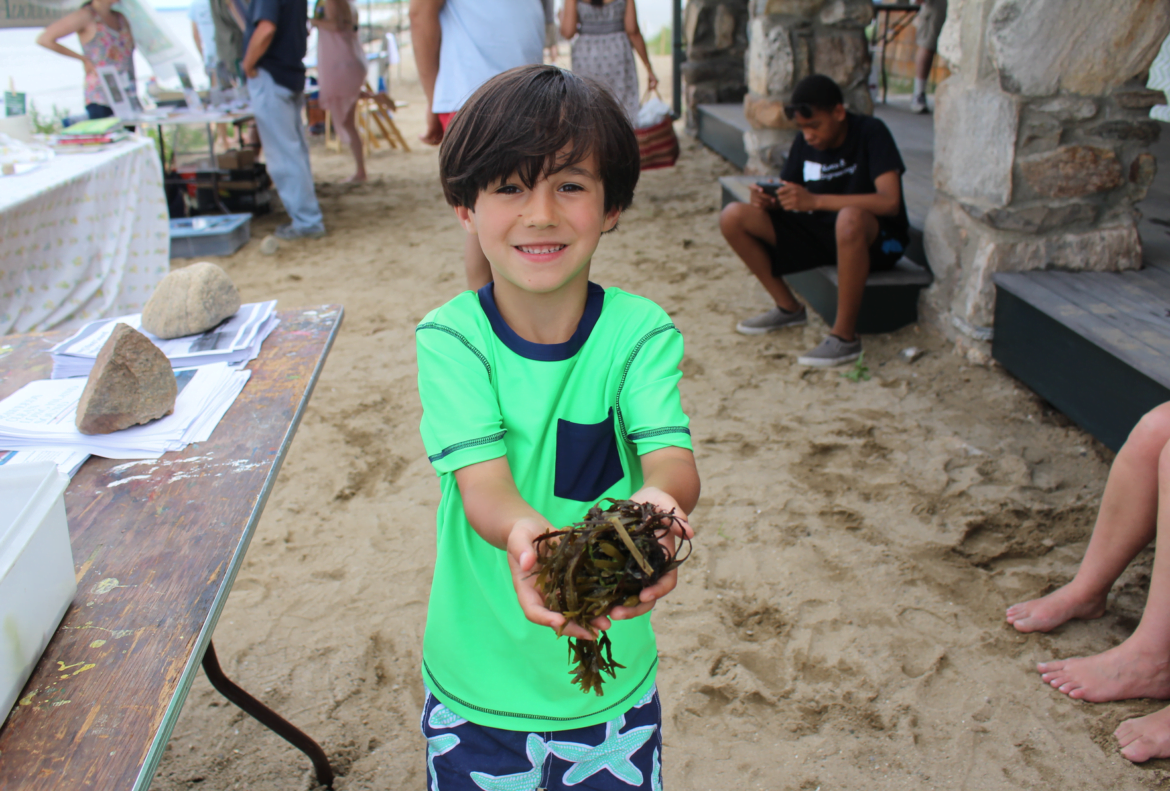 Volunteers pointed out that seaweed is valuable for “bioextraction,” a fancy name for removing nitrogen from Long Island Sound. Excess nitrogen leads to a condition called hypoxia. A threat to the Sound’s ecosystem that makes water uninhabitable for fish in deeper waters such as bluefish, fluke, blackfish and flounder, hypoxia results from excess nitrogen and lack of oxygen in the water. 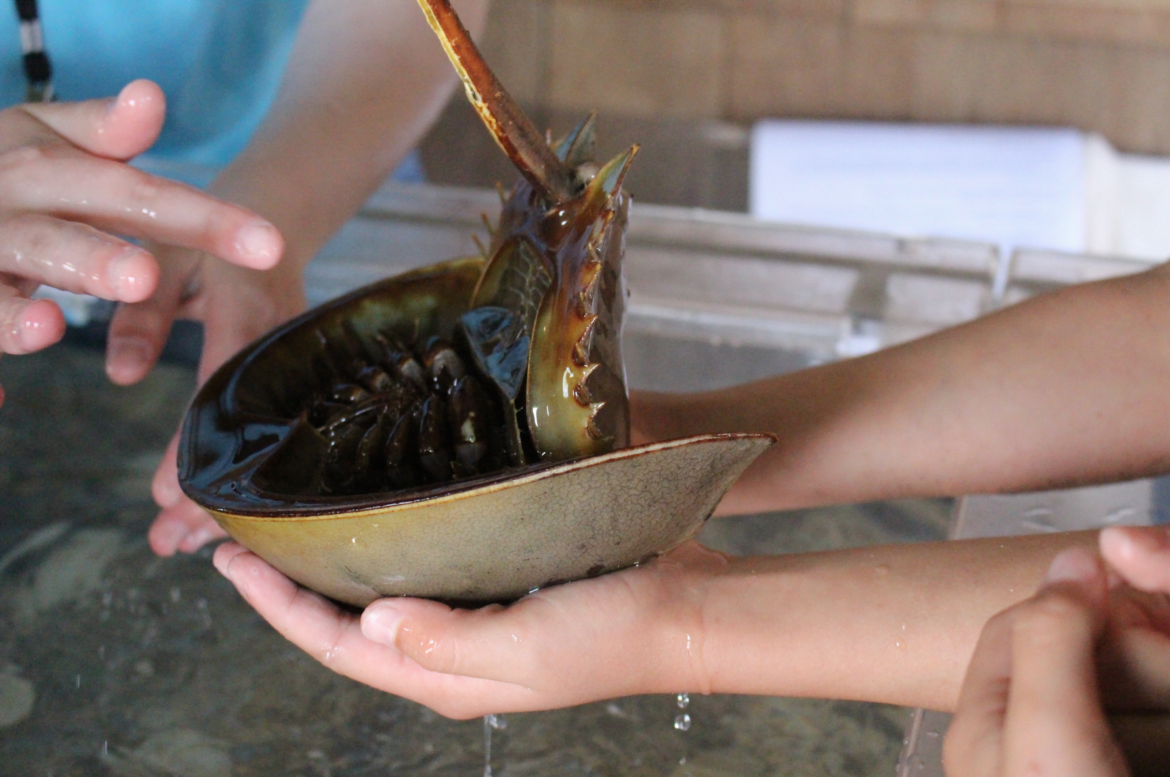 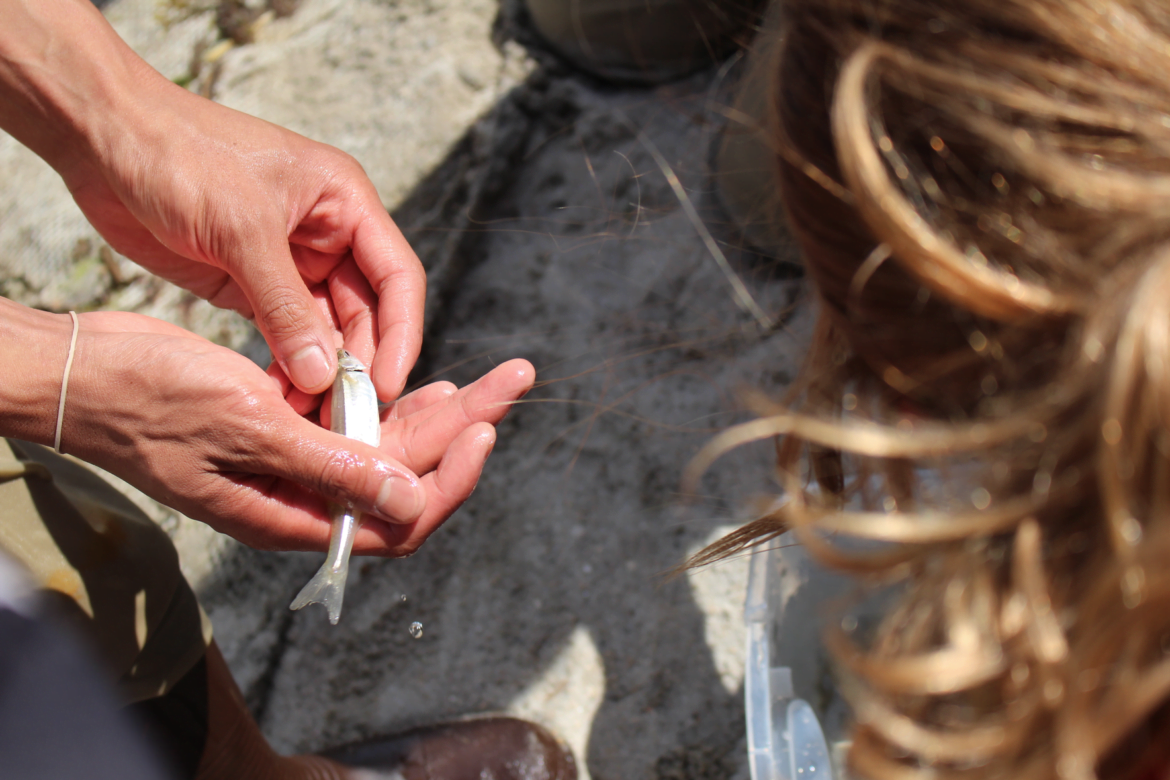 Steven Fong explained to a curious girl that the crab she found had a hold in its shell from where a seagull must have opened it. Credit: Leslie Yager 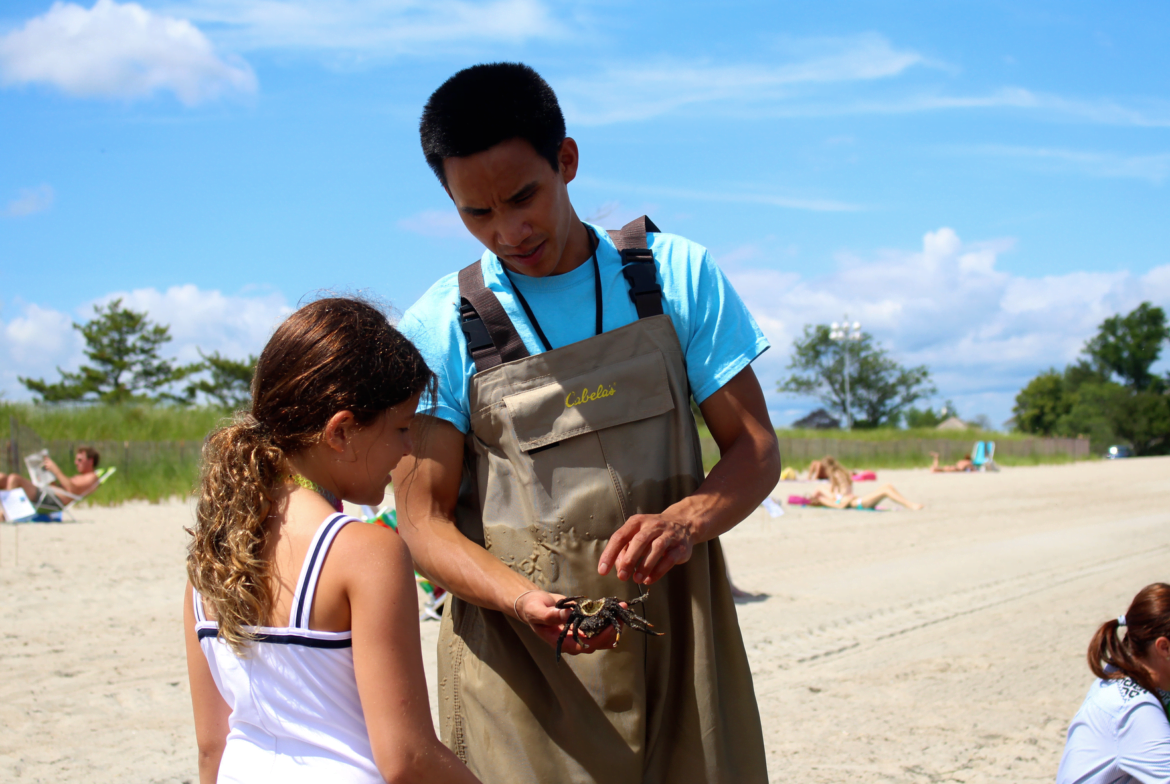 Steven Fong explained to a curious girl that the crab she found had a hold in its shell from where a seagull must have opened it. Credit: Leslie Yager

At the Seaside Center volunteers let guests hold horse shoe crabs and tour the building with its multitude of fish tanks. Along the beach, Steven Fong, Kabir Parker and Leah Common drew a crowd of children with their giant net. Steven said usually the net results in a haul of Killi Fish, Atlantic Silversides (a type of minnows) and Mummichugs.

The children were delighted to see the net drag in a dozen Atlantic Silversides and a baby Flounder, which they gently collected to return to the Sound.

For those who wanted a different angle, the Greenwich Historical Society led a guided historical cycling tour of Greenwich Park linked to the celebration of Greenwich’s 375th birthday. The tour focused on key events in the history of the Point, including current initiatives by the Greenwich Point Conservancy to restore public buildings and native habitats. 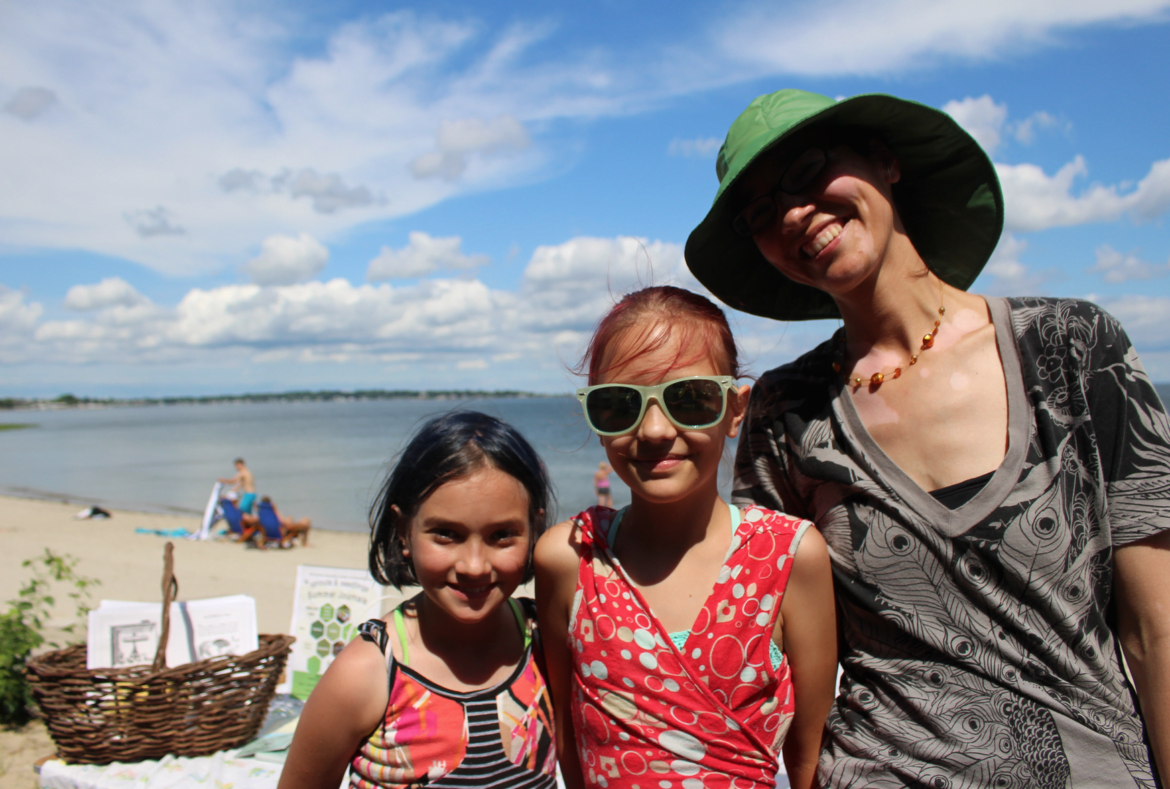 Deanna Novak of the Garden Education Center with daughters Allison and Isobelle at the Experience the 9th annual Sound event on Sunday. Credit: Leslie Yager

Deanna Novak of the Garden Education Center said she’s excited that this summer Greenwich Public Schools summer program will feature visits from her organization along with Bruce Museum and Audubon. Novak said that as a result of a grant from the Alliance for Eduction, every afternoon the kids in summer school will get a chance to have a visit with one of the groups.

“We have got to remember how to play,” Novak said, adding that every third Sunday there is Nature Play in the Pinetum.

“We’re trying to get families to explore, get outside and get messy,” Novak said, adding that there are a variety of summer programs at the Garden Education Center. “We even get dirty and make mud pies and build forts.” 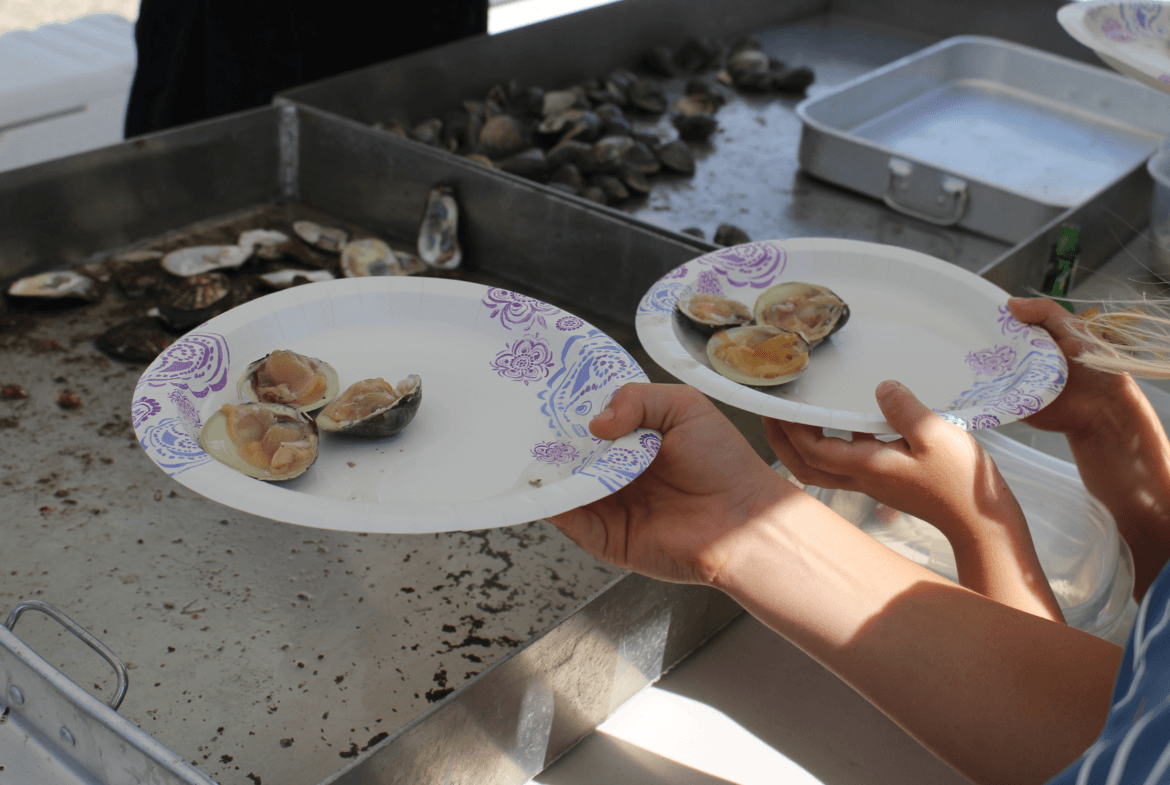 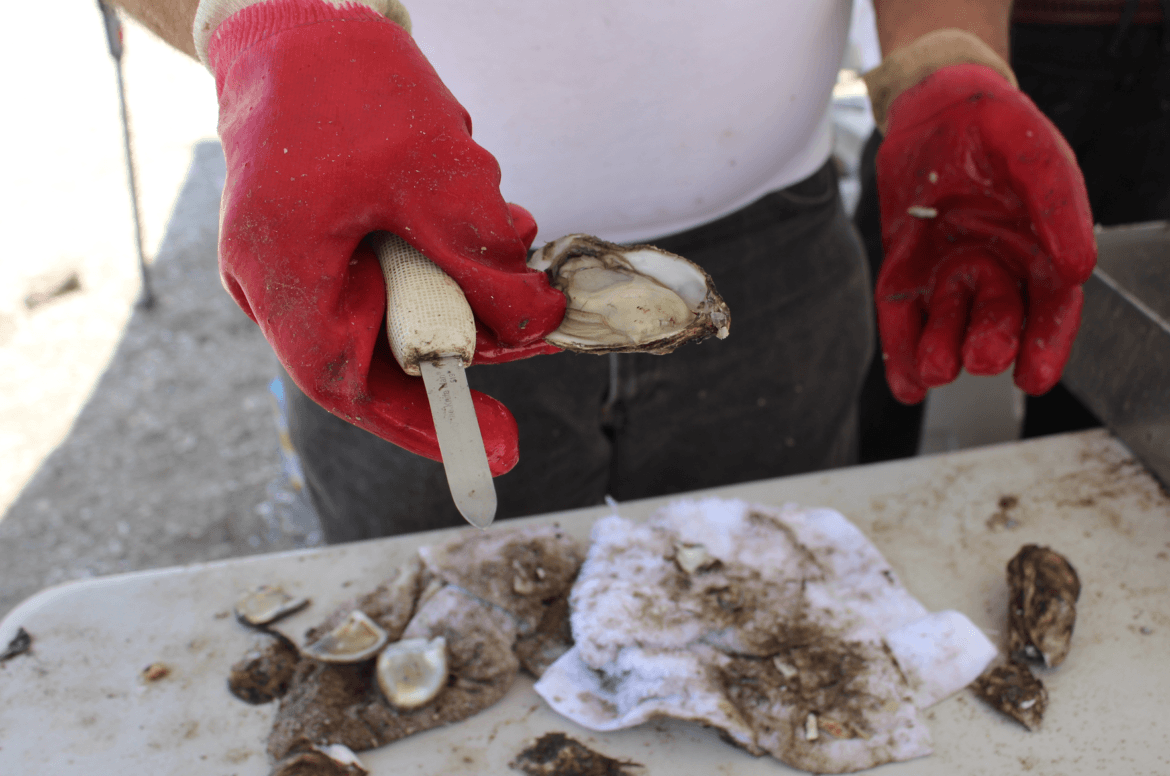 Shucking oysters at the rawbar at the Experience the Sound event. Credit: Leslie Yager

The event included tours of Ed Stilwagen’s shellfishing boat and his free raw bar, which was incredibly popular.

“It’s serendipitours,” said Ed who runs Atlantic Clam Farms based out of Byram. “The day turned out to be a good one. Everybody is very enthusiastic. Between looking at the boat and eating the produce, they’re incredibly receptive.” By 3:30 Ed said the clams had run out.

During a tour of Ed’s shellfishing boat, many eyes widened. “It’s basically farming under water,” Ed said. And though he clearly loves his work, and enjoys socializing and sharing the story of his business and how shellfish have revived in Long Island Sound, Ed said his nemesis are plastic bags. “I hate plastic. It’s the worst. It’s going to kill the world by smothering it.” 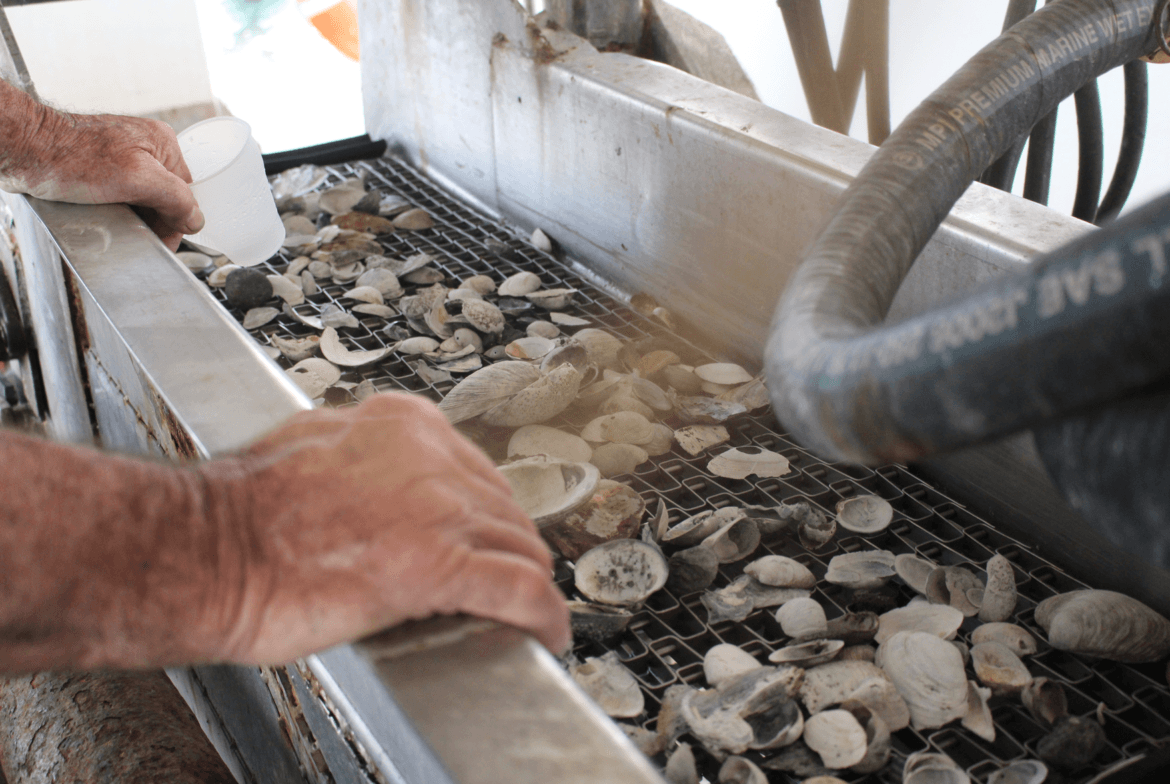 Ed Stilwagen shows how he operates the shellfish sorting machine he invented. His friends teased him that it makes a noise like \”ca-ching.\” In fact, Ed built the entire barge himself. Credit: Leslie Yager

“We have taken 5,000 tons of garbage out since 2000,” he said, adding that the garbage int eh water is everywhere. “Many years ago when there was no town trash collection, they hauled it out onto the ice. The seagulls would eat what they could and when the ice melted it would disappear,” he said. Ed described how among the garbage is an infinite supply of antique bottles. “We collect them in boxes.” 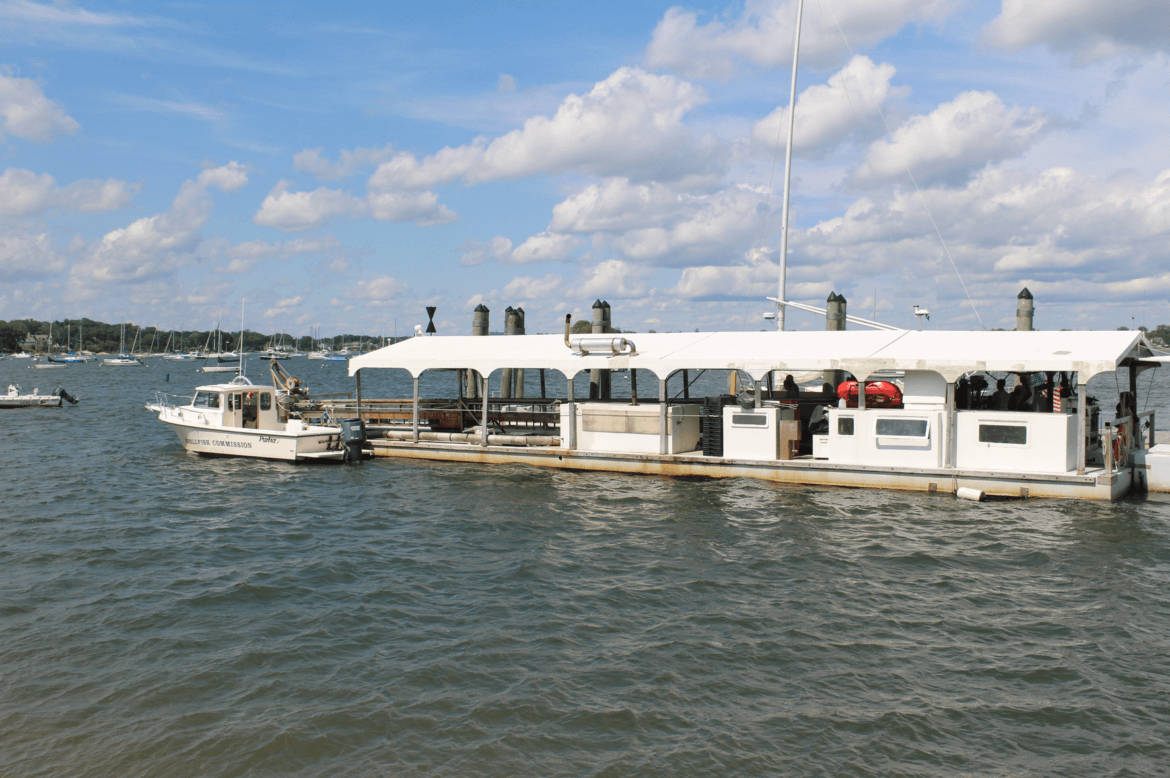 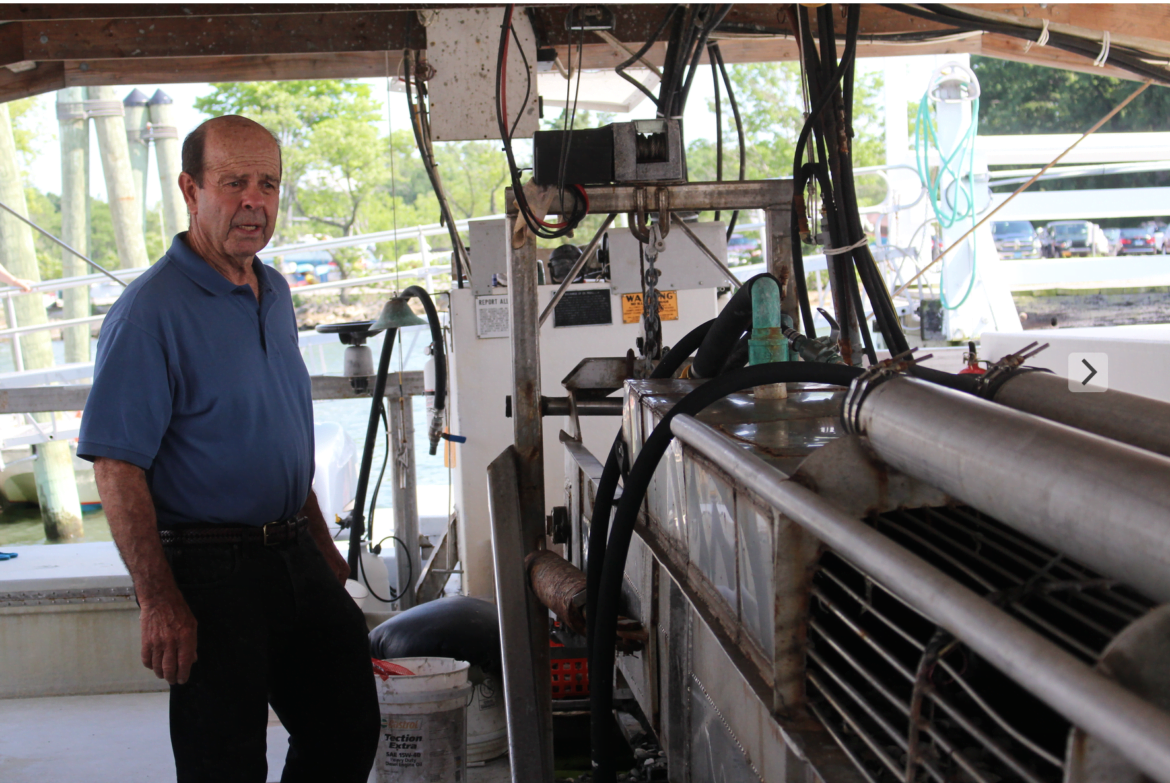 On Ed Stilwagen’s barge, shellfish run down the conveyor belt and into this area where the mud is washed off. Credit: Leslie Yager

Down on the shellfish barge, Ed and Jay Louden, who does water sampling with the shellfishing commission explained how the process works. The barge basically operates like a vacuum that sucks up the shellfish (along with the plastic bags and other garbage) and the shellfish move along a conveyor belt before being sorted.

“The sled picks it up and puts it on a conveyor belt,” Ed said. We work in a maximum depth of about 45 feet.”

After moving along the conveyor belt, the shellfish go through what looks like an airport x-ray machine where the mud is washed off. At the end of the line the shellfish move down a ramp that is a grate. The baby clams drop through the grate and back into the water.

On the other side of the dock, the Sound Waters schooner returned from its Father’s Day Cruise around 4:00pm.

The Experience the Sound event was supported by The Greenwich Historical Society, The Greenwich Conservation Commission and coincided with the Summer Season opening of the Bruce Museum Seaside Center.

More information is available on the Greenwich Shellfish Commission website.

Shellfish Bed status is available online, and residents can even subscribe to an RSS feed for an individual shellfish bed’s status. For the latest information about what recreational beds are open or closed call the Shellfish Hotline at (203) 622-7777.